Pollinosis is one of the most common allergic diseases in Asia, Central and Northern Europe as well as in North America. Several proteins in parthenium pollen have already been characterized as allergens causing sensitization and the development of allergic symptoms in atopic individuals. Glutathione-S-transferase are a phylogenetically widespread enzyme family mainly involved in cellular detoxification processes and have already been described as allergens in house dust mite and German cockroach. However, no data about the role of parthenium-GST in plant pollen allergy were available so far, for this purpose we evaluated its immunological and biochemical features. In biochemical assays b-GST was not enzymatically active, whereas p-GST demonstrated high enzymatic activity. In summary, IgE antibodies level did not show significant raise after incubation neither in the VT20 nor in the Bet v1 group while significant raise is observed with IgG antibodies. No cross-reactivity between p-GST-specific Abs and b-GST was observed. In contrast, GST-specific IgG clearly recognized GST in VT20.

Austrian paediatrician Clemens von Pirquet first introduced the term “allergy” and described changes in reactivity to antigens after secondary or subsequent encounter 1. Birch pollinosis is one the most common allergic diseases 2. Several proteins like Bet v 2,4,6,7 in birch pollen have been identified to cause sensitization in allergic individuals 3.

Elevated GSH levels are observed in various types of tumors, suggesting that antioxidant treatment may provide protection from cancer 4. In plants, GSTs were identified shortly after their mammalian counterparts and are also involved in cellular detoxification processes 5.

In particular, it was demonstrated that certain plant GSTs play a role in herbicide resistance 6, associated with the protection from reactive oxygen species and the biosynthesis of anthocyanins, which are responsible for the coloration of fruits 7. Recently, in a proteome profiling approach of birch pollen, high quantities of a 27kDa protein of the GST family were identified 8. The phenomenon of cross-reactivity is constantly observed in many different types of allergy and is of important clinical relevance. GSTs of parthenium and birch share a conserved structure at the N-terminus, they do not display high overall amino acid sequence homology within different subclasses 9. Several studies provided evidence that IgE antibodies recognize certain carbohydrate structures on allergens leading to cross-reactivity 10. The spectrum of cross-reactive proteins is very broad and Ferreira et al., grouped them into 28 different classes according to structural similarities 11.

Due to structural homologies some unexpected cross-reactions, e.g. between banana/mugwort, birch/parthenium or latex/banana/avocado, were observed 12. Birch or grass pollen-allergic individuals develop allergic reactions after the ingestion of fruits (apple, pear, cherry, kiwi), vegetables (celery, carrot, potato) or nuts (hazelnut). The occurrence of pollen-food syndrome can be attributed to the close structural identity of the parthenium pollen allergen or birch pollen major allergen (Bet v1) and birch pollen profilin (Bet v2) with proteins in plant-derived food 13. It was reported that about 70% of pollinosis patients show allergic reactions 14 after the intake of pollen related food. Bet v1-related food allergens revealed that these dietary proteins contain several distinct T-cell epitopes and activate Bet v1-specific T cells to proliferate and produce cytokines.

Purification of GST from Parthenium hysterophorus by FPLC:

Flowers of parthenium were made into smoothie15 and GST purification from the extract was performed using an Akta Prime protein purification system (GE Healthcare, Germany). The system was washed with 40 mL of ethanol and wash buffer at a flow rate of 5 mL/min and a backpressure limit of 1 MPa. Subsequently, the system was equilibrated with 40 mL of lysis buffer. Glutathione Sepharose 4B column (GE Healthcare, Germany) was washed with 10 mL of ethanol (20% v/v) and ddH2O. Equilibration of the column was done with binding buffer (10 mL). Washing and equilibration of the column was performed at a flow rate of 1 mL/min and back pressure limit of 0.5 MPa. sample was loaded onto the column and eluted with 30 mL lysis buffer by applying a linear imidazole gradient (100% lysis buffer – 0% elution buffer a 20% lysis buffer/ 80% elution buffer). Eluted protein was collected in fractions of 1 mL. Eluted protein samples were pooled and filled into a dialysis membrane with a cut-off of 6-8 kDa (Pall Corporation). Protein suspension was dialysed in approximately 2 L of dialysis buffer and the buffer was changed for four times against sodium phosphate (Na2HPO4, 50 mM, pH=8.0) buffer to remove cell toxic imidazole.

GST Protein samples were analyzed by means of SDS-PAGE 16. For visualization, gels were stained with Coomassie Brilliant Blue dye and subsequently exposed in a gel imager. All gels were prepared and run in a Mini Gel chamber (BioRad, USA).  15 µL of protein sample were mixed with 5 µL of 2x loading dye and were boiled at 95°C in heating block for 5 min. 3 µL of protein ladder (Page Ruler, Fermentas) along with the samples were loaded and a constant voltage of 50V was applied (Bio-Rad Laboratories, USA) until the dye completely left the gel.

The enzymatic activity of GST was determined in an enzymatic activity assay 17 (Glutathione-S-transferase assay kit, Abcam, ab65326). 10 µl of GST sample from parthenium extract was diluted in 190 µl of ddH2O and put on ice. 150 µL of assay buffer were added to flat bottom 96 well plates (Greiner, Germany). Another 20 µL of glutathione solution were pipetted to the blank and samples. To start the enzymatic reaction, 10 µL of the substrate (1-chloro-2, 4-dinitrobenze, CNDB) were added and the absorbance was measured immediately at 340 nm in a plate reader (Thermo Multiskan). The absorbance was determined every 5 min over a time period of one hour.

Determination of pollinosis by ELISA:

A potential cross-reactivity between specific birch-GST and parthenium-GST was analyzed. ELISA plates (Puregene) were coated with 100µL/well of birch pollen and parthenium extracts (each 50 µg/mL) in carbonate buffer overnight at 4°C. Subsequently, the plates were washed twice with PBST and blocked with 150 µL/well of PBST (1% BSA) for 6 hours at RT. 100µl /well of anti-human IgE and anti-human IgG (1:1000 in PBST; Puregene) were added and incubated for 90 min at 37°C followed by 90 min at 4°C. The plates were washed and 100 µL/well of goat anti-human IgG/IgE HRP-linked (1:2000 in PBST; Puregene) were applied for 1 h at 37°C. The absorbance was measured at 405 nm in a plate reader (Thermo Multiskan, USA).

A potential cross-reactivity between specific birch-GST and parthenium-GST was analyzed. ELISA plates (Puregene) were coated with 100µL/well of birch pollen and parthenium extracts (each 50 µg/mL) in carbonate buffer O/N at 4°C. Subsequently, the plates were washed twice with PBST and blocked with 150 µL/well of PBST (1% BSA) for 6 hours at RT.100 µL/well of anti-human IgE and anti-human IgG (1:1000 in PBST; Puregene) were added and incubated for 90 min at 37°C followed by 90 min at 4°C. The plates were washed and 100 µL/well of goat anti-human IgG/IgE HRP-linked (1:2000 in PBST; Puregene) were applied for 1 h at 37°C. The absorbance was measured at 405 nm in a plate reader (Thermo Multiskan, USA).

Purification of GST from Parthenium hysterophorus:

Stained protein bands at a size of 27 kDa represent GST produced in satisfactory yields. However, several other protein bands indicated that this purification method only roughly purified the protein. To reduce these impurities, an additional purification step was performed by FPLC. The pooled pre-purified protein sample was loaded onto a Sepharose 4B column and protein was eluted by increasing imidazole concentrations. Collected protein fractions were analyzed by SDS-PAGE. The gels were scanned on a Gel scanner with white light converter (UVI-Tech, Lark Innovative) and the resulting image was analyzed with UVI-Tech Software (Fig.1) 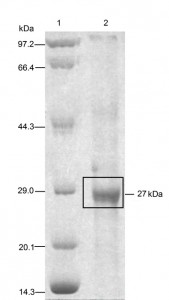 The enzymatic activity of GST and BPE was investigated in a GST activity assay kit. The results showed that Birch GST was not enzymatically active when compared to parthenium GST, whereas BPE used as positive control displayed high enzymatic activity.GST from the crude extract of purified birch and parthenium pollen was used for measurement of total GST activity by a suitable substrate 1-Chloro-2,4-dinitrobenzene (CDNB) at 340nm which is used for the broadest range of GST isozymes(Table 1).

Determination of pollinosis by ELISA:

VT20pollen showed a specific IgG response and antibodytitres increased after every regular interval (Fig.2). IgE antibodies level did not shown significant raise after incubation neither in the VT20 nor in the Bet v1 group. A moderate increase of IgE antibodytitres was seen in both groups. These findings demonstrated that VT20 was immunogenic and IgG antibodies, slightly upregulated IgE levels were detected. The same applied to the major birch pollen allergen Bet v1. This fact suggests that VT20 shows similar folding and structure compared to the Bet v1 of birch pollen. 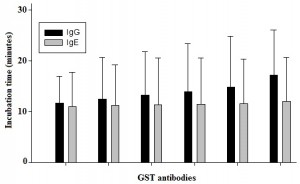 FIG.2: GST ANTIBODIES RAISED TOWARDS THE VT20 AND BET V1 POLLENS AT DIFFERENT INTERVALS. N = 3 FOR ALL GROUPS, VALUES ARE MEANS ± SE.

Previously, proteins of GST-family were identified as allergens in house dust mite allergen, Der 20 and German cockroach, Bla g5 21. We investigated a potential cross-reactivity between GST from birch and GST from parthenium. Therefore, ELISA-plates were coated with p-GST extract along with b-GST extract and incubated with IgG and or IgE-antibodies. No cross-reactivity between GST-specific antibodies and HDM-GST was observed (Fig.3 white bars). In contrast, GST-specific IgG clearly recognized GST in VT20 (Fig.3, black bars). 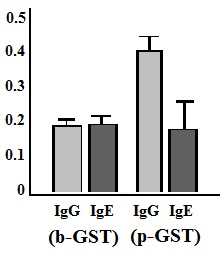 FIG.3: DETECTION OF GST SPECIFIC ANTIBODIES CROSS-REACTING WITH PARTHENIUM POLLENS, BUT NOT SEEN IN BIRCH GST

CONCLUSION: GSTs belong to a well-conserved enzyme super family which are, besides several other functions, mainly responsible for the detoxification of potential harmful substrates. Sequence alignments of birch-GST with several known GSTs revealed a homology of 79% with a protein belonging to the GST omega class. Recently, a GST-like protein has been found in birch pollen and was present in high amounts. However, biochemical and immunological properties of parthenium-GST have not been investigated by now. Most interesting, to date, no data about the allergenicity of GST and its potential role in the development of parthenium pollen allergy has been gathered. Hence, our study has attempt to identify the GST levels in parthenium and also the cross-reactivity of antibodies towards the raised GST levels. However, we showed that it is still a minor allergen for humans. Whether this is due to its release from the pollen or intrinsic properties will be elucidated in future experiments.

CONFLICT OF INTERESTS: The authors declare that there is no conflict of interests exist among them regarding the publication of this paper.