ABSTRACT: Chlamydia trachomatis is the most common bacterial sexually transmitted disease. Over 100 million men and women worldwide are infected with Chlamydia at any point in time. The aim of this study to detect the presence of C. trachomatis antibodies and antigen among women on the reproductive age and to study the relationship between the presence of C. trachomatis and age, abortion and ectopic pregnancy. Five hundred women classify into three hundred pregnant women with a gestational age between 12 and 36 weeks and two hundred nonpregnant women. Two blood samples collected individually in two different containers, one EDTA container for PCR technique and plane container for ELISA testing during the period June 2011 to August 2013. Thirty-one samples (6.2%) were positive for C. trachomtis IgG only, while 8 samples (1.6%) were positive for both IgM and IgG. Out of 31 samples, 25 samples (5%) were positive by using the PCR technique. The results revealed statistically a significant relationship between PCR and previous abortion and ectopic pregnancy with P value, 0.001 and 0.002, respectively. The age range between (30-35) years is considered as a risk factor that exposes sexually –active women to C. trachomatis infection. Chlamydia trachomatis infection in women is a cause of abortion and ectopic pregnancy.

INTRODUCTION: Over 100 million men and women worldwide are infected with chlamydia at any point in time 1.

It is the most commonly reported bacterial sexually transmitted infection (STI) in developed countries, with over 1.4 million cases reported in the United States in 2011 2.

There are at least 18 serovars of C. trachomatis; the important medical serovars associated with endemic trachoma are A, B, Ba, and C while D-K serovars are associated with sexually transmitted disease and that cause lymphogranuloma venereum are L1, L2, and L3 3.

Left untreated, Chlamydia can ascend from the endocervix to the upper genital tract in women and cause pelvic inflammatory disease (PID) which can increase the risk of developing fallopian tube scarring, potentially leading to ectopic pregnancy, tubal infertility, and chronic pelvic pain 4, 5. Also, genital infection in pregnant women increases the risk of preterm delivery, can be passed on to the baby during vaginal delivery and may result in eye and lung infections in the newborn 4, 6.

Ethical Approval: The study was approved by the Al Neelain Medical Research Committee and Omdurman Maternity Hospital ethical committee. All participants signed informed consent forms before enrolment in the study.

Study Design: This is a descriptive cross-sectional laboratory and a hospital-based study conducted in Omdurman state, to determine the frequency of C. trachmatis among women at the reproductive age during the period June 2011 to August 2013.

Study participants were filled with a self-administered questionnaire, which included data on sociodemographic, reproductive, and medical history.

ELISA Test: The ELISA test is done by using NEUROIMMUNE kit, briefly, basis of antigen preparation was BGM- cells infected with the C. trachomatis of the serotype K. The microplate well were coated with purified MOMP antigen (major outer membrane protein), which is a transmembrane protein in the outer membrane of the elementary bodies. The test kit contains microtitre strips, each with eight break-off reagent wells coated with C. trachomatis antigens. In the first reaction step, diluted patient samples were incubated with the wells. In the case of positive samples, specific IgG IgM antibodies will bind to the antigens. To detect the bound antibodies, a second incubation is carried out using an enzyme-labeled anti-human IgGIgM (enzyme conjugate) which is capable of promoting a color reaction.

Photometric measurement of color intensity was made at a wavelength of between 620 nm and 650 nm within 30 minutes of adding the stop solution. The intensity of the formed color is proportional to the concentration of antibodies against C. trachomatis antigens.

The color intensity obtained from the automated ELISA reader was interpreted by qualitative analysis by the formula extinction value of the control extinction of calibrator 2 interpretation: 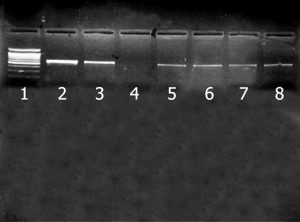 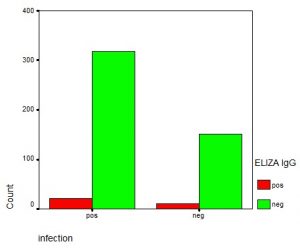 TABLE 2: CORRELATION BETWEEN IGG AND NUMBER OF ABORTION

TABLE 3: CORRELATION BETWEEN IGG AND NUMBER OF ECTOPIC PREGNANCY

There were several studies conducted in Sudan that reported the prevalence of C. trachomatis. The percentage of C. trachomatis reported in this study was 5% using the PCR technique and 6.2% by ELISA technique, and this not a surprising result because Sudan is a traditional Islamic society, and according to the customs and traditions of Islamic societies, free sexuality is prohibited, but this result is lower in comparison with study done by Mohamed et al., who found that percentage was 60 (47.2%) and this may be due high selection criteria for the symptomatic participate 7.

Our findings indicated that C. trachomatis infections common among age group (30-35 year), this result was in alignment with study done in Saudi Arabia 10 where  they reported that the common age was  above 34 years, and in contrary with Eltaybe et al., 8 results whose stated that C. trachomatis infections common in the age group between  24-30 years. Other reported that 25 years as suspected age group 13.

ACKNOWLEDGEMENT: Authors are grateful to the health authorities of Omdurman maternity Hosptial, for providing necessary facilities to carry out the research work. Thanks for Dr. Lamies A. Kaddam for her kind assistance and support while performing the study.