INTRODUCTION: The immune system is a remarkably versatile defense system that has evolved to protect animals from invading pathogenic microorganisms to eliminate the disease. It is able to generate a multifarious variety of cells and molecules capable of specifically recognizing and eliminating variety of foreign invaders 1. It is now being recognized that modulation of immunological response could provide an alternative to conventional chemotherapy for a variety of diseased conditions of impaired immune responsiveness or when a selective immunosuppression has to be induced in situations like autoimmune disorders and organ transplantation.

The modulation of the immune response by using Ayurvedic herbal medications as a possible therapeutic measure has now become a subject of scientific investigation. One of the therapeutic strategies in Ayurvedic medicines is to enhance the body’s overall natural resistance to the disease causing agent rather than directly neutralizing the agent itself 2. Immunomodulation is the process of modifying an immune response in a positive (immunostimulation) or negative manner (immunosuppressant) by administration of a drug or compound 3.

There are many plants which are used as immunomodulators. Heterostemma tanjorense shows immunostimulant activity against Azathioprine administered rats 4. The methanolic root extract of Withania somnifera shows immunostimulatory activities in dexamethasone induced immunocompromised mice and in vitro model 5. The Methanolic leaf extract of Moringa oleifera shows an immunostimulatory effect on both the cell-mediated and humoral immune systems in the Wistar albino rats 6. The methanolic leaf extracts of Cameroonian medicinal plants possess immunomodulatory activity 7.The ethanolic extract of Sonerila tinnevelliensis showed a stimulatory effect on both humoral and cellular immune functions in animal models 8. Caesalpinia sappan shows the nonspecific immunomodulatory effect on murine peritoneal macrophages 9. The aqueous leaf extract of Ocimum basilicum Linn. is a potent immunostimulant, stimulating specific and nonspecific immune mechanisms. The immuno-stimulatory activity of O. basilicum is due to flavonoids (quercetin), alkaloids, tannins, saponin glycosides and phenolic compounds 10.

The aqueous extract of Leucas aspera was evaluated in cyclophosphamide-induced immunosuppressive mice and it shows prominent immunostimulatory effect 14. The leaves of Calotropis gigantea, C. rotang and A. integrifolia have an immunosuppressive activity of the variable doses of crude saponin (0.625 – 2.5 mg) on lymphocytes, monocytes and granulocytes 15.

For this study we have selected two plants, Rumex vesicarius Linn. and Symplocos racemosa Roxb.

Rumex vesicarius Linn. (Chooka) belongs to perennial herbs to the family Polygonaceae. The plant is an erect usually with a long taproot. Traditionally the plant is used as stomachic, Diuretic, used for the disorders of the lymphatic and glandular system, for bronchitis, asthma, constipation, dyspepsia and the diseases of the liver. Plant leaves are rich in ascorbic acid, citric acid and tartaric acid, it also contains glycoside, alkaloid, flavonoids, tannins and phenolic compounds 21, 22.

B) Symplocos racemosa leaves were subjected to Soxhlet extraction with 95% ethanol and N-hexane to obtain ethanolic and N-hexane extract respectively. The extracts obtained were subjected to the Rotary flash evaporator to remove excess of solvent and dried extracts were stored in a cool place in tight pack container for further use.

Animals: All the experiments were carried out using male albino rats of wistar strain. Weight around 150 - 200 gm. The animals are free to access of food and water, and they were housed in a natural (12 h each) light-dark cycle. The animals were acclimatized for at least 5 days to the laboratory conditions before the experiment. The experimental protocol was approved by the institutional animal ethics committee (IAEC/ ABCP/09/2016-17) and the care of laboratory animal was taken as per the guidelines of CPCSEA, the ministry of forests and environment government of India.

Preliminary Phytochemical Screening: All the extracts were subjected to preliminary phytochemical screening using the method described by Kokate, Trease and Evans for the detection of various plants constituents. Test were carried out for the presence or absence of Phytoconstituents like glycosides, flavonoids, saponins, alkaloids, carbohydrates, sterols, phenolic compound and reducing compounds 26, 27, 28.

Drugs and Chemicals: All the drugs and Chemical were of analytical grade while the other drugs were procured from - Levamisole (Johnson and Johnson Ltd.,) Cyclophosphamide (Biochem pharmaceutical industries Ltd.,) Colloidal carbon (Indian ink, Camel India Pvt. Ltd.,).

Selection of doses: Acute Toxicity studies were performed according to the organization for economic cooperation and development (OECD) guideline (425). Form acute toxicity study there was no mortality and physical/behavioral changes showed after administration of all the extract over 14 days at the dose of 2000 and 5000 mg/kg to a different group of rat weight around 150 - 200 gm. The experiments were performed after the experimental protocols had been approved by the institutional animal ethical committee.

Pharmacological Screening: The immuno-modulatory activity is carried out by using Carbon clearance test. (Test for Phagocytosis) and Delayed-Type Hypersensitivity Reaction.

Where ODI and OD2 are the optical density at time t1 and t2, respectively.

Preparation of Carbon Ink Suspension: Camlin ink was diluted eight times with saline and used for carbon clearance test in a dose of 10 μl/gm body weight of rat 31.

Statistical Analysis: The result was expressed as mean value ± SEM. The variation in a set of data has been estimated by performing one-way analysis of variation (ANOVA). Individual comparison of group mean value were done using Dunnet’s test. The P value < 0.05, were considered statistically significant.

Preparation of Sheep RBCs: Sheep blood was collected in sterile Alsever’s solution in 1:1 proportion, Alsever’s solution (freshly prepared) blood was kept in the refrigerator and processed for the preparation of SRBCs batch, by centrifugation at 2000 rpm for 10 min and washing with physiological saline 4 - 5 times and then suspending into buffered saline for further use 31.

Statistical Analysis: The result was expressed as mean value ± SEM. The variation in a set of data has been estimated by performing one-way analysis of variation (ANOVA). Individual comparison of group mean value were done using Dunnett’s test. The P value < 0.05, were considered statistically significant.

Acute Oral Toxicity Study: Acute oral toxicity was carried out by the up-down method. It is found that all extract (EARV, ERV, ESR and NSR) were safe at limit dose 4000 mg/kg and 2000 mg/kg, with no mortality and physical/behavioral changes. 1/10th of this dose i.e. 400 mg/kg and 200 mg/kg were used in the subsequent study.

Carbon Clearance Test: Effect of EARV, ERV, ESR, and NSR on the phagocytic activity by the carbon clearance test is shown in Table 4. The phagocytic activity of the reticuloendothelial system is generally measured by the rate of removal of carbon particles from the bloodstream. In carbon clearance test EARV, ERV and ESR, treated all groups exhibited significantly high phagocytic index (P < 0.0001) when compared with control group. While NSR treated group showed a small increase in their phagocytic index when compared with control group. This indicates stimulation of the reticuloendothelial system. 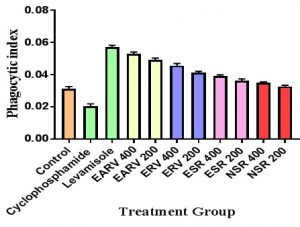 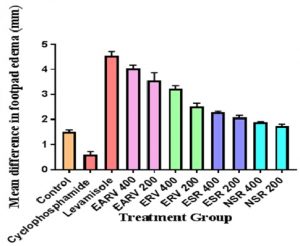 In the present study after oral administration of all the extract (EARV, ERV, ESR and NSR) at an experimental dose (400 mg/kg and 200 mg/kg) showed a significant increase in the phagocytic index (P < 0.0001) when compared with control group. Increase in phagocytic activity indicates that there was stimulation of reticuloendothelial system.

According to N. L. Dashputre et al., Cell-mediated immunity involves the interaction of effectors mechanism carried out by T lymphocytes and their products (lymphokines). DTH required specific recognition of antigen by activated T lymphocytes, which subsequently proliferate and release cytokines. These in turn increase vessel permeability cause vasodilatation, macrophage accumulation, and activation promoting phagocytic activity and increased concentration of lytic enzyme for more effective killing. The delay in the onset of the response reflects the time required for the cytokines to induce the recruitment and activation of macrophages. Therefore increase in DTH response after oral administration of all the extract (EARV, ERV, ESR and NSR) at experimental dose (400 mg/kg and 200 mg/kg) showed a significant increase in footpad edema (P < 0.0001) when compared with control. It is indicate stimulation of the cell-mediated immunity.

In this study, the overall order of immuno-modulatory activity was established as EARV > ERV > ESR > NSR.

CONFLICT OF INTEREST: The authors declare that they have no conflict of interests.