ABSTRACT: Stress plays a major role in various pathophysiological processes related with neurodegenerative diseases and mental disorders. Zebrafish has emerged as a promising model organism in inducing Chronic Unpredictable Stress (CUS). In the present study, we have attempted to understand the molecular basis of neuronal changes underlying CUS in zebrafish model. An evidence for a connection between CUS and apoptosis in the brain of zebrafish was analyzed. For this purpose, zebrafish were subjected to CUS protocol twice a day for a period of 15 days. The impact of CUS on the brain was evaluated in relation to the expression of the stress marker genes: corticotropin releasing factor (crf) and glucocorticoid receptor (gr). The effects of CUS were also estimated from the expression of p53 mediated apoptotic genes: p53, noxa, bcl2 and casp3. CUS protocol increased the gene expression of crf (p<0.05) and decreased the expression of gr (p<0.05). The impact of CUS on the apoptotic pathway showed increased expression of p53 (p< 0.05) and noxa (p<0.05) with a decrease in expression of mitochondrial bcl2 (p<0.05). As a hallmark of apoptosis, CUS increased the expression of casp3 (p<0.05). In principle, CUS has the potency to exert their detrimental effects on the neuronal cells of the brain and has confirmed p53 induced apoptosis in the brain of zebrafish.

INTRODUCTION: Neurodegenerative diseases are a heterogeneous group of disorders characterized by progressive, selective loss of anatomically or physiologically related neuronal systems 1. Many lines of evidence suggest that the greatest risk factor for neurodegenerative diseases is ageing, and mitochondria have been thought to contribute to ageing through the accumulation of mitochondrial DNA mutations and net production of reactive oxygen species (ROS) 2.

World Health Organization (WHO) has reported that stress is the central lifestyle risk factor, the leading cause of the global burden of disease. Within bounds, stress has positive effects such as improved memory performance 5, increased alertness, focus, energy and also it can help people to manage unfavorable situations. However chronic stress takes a toll on physiology affecting productivity and quality of life and ultimately leading to many affective disorders 6, 7.

Chronic Unpredictable Stress (CUS), one of the most clinically relevant stress paradigms in rodents, mimics a number of characteristics observed in patients with mental disorders 8, 9. Numerous experimental studies of rodent models appear to be costly affairs for screening of thousands of novel, potential candidate small molecules. Recently, Zebrafish (Danio rerio) have emerged as a promising novel organism to study neuroscience 10 and other related areas. This species has relatively 84 percent genetic homology to humans 11 and provides many advantages when compared to other vertebrates such as low cost, easy handling and faster reproduction 12. Moreover, zebrafish brain is neuroanatomically and functionally comparable to mammals 13 and it is the target organ of stress 14.

In zebrafish, stress system is characterized by the hypothalamus – pituitary – interrenal axis (HPI) 15, 16. Similarly to the mammalian hypothalamus – pituitary – adrenal axis (HPA), the zebrafish HPI axis controls the levels of circulating cortisol. Hippocampus of the brain provides negative control over the HPA axis. Chronic Stress suppresses cell proliferation in the hippocampus 17 and leads to the activation of the HPA axis 18. A stressful signal stimulates secretion of Corticotropin Releasing Factor (CRF) 19. In response to CRF, the pituitary releases Adrenocorticotropic Hormone (ACTH) which reaches the head kidney of fish. Cortisol is secreted and binds to the Glucocorticoid Receptor (GR), a ligand activated nuclear transcription factor. GR regulates transcription of target genes related to glucose metabolism, immune and other physiological functions 20, 21.

There are two key aspects of stress response. Firstly, the body responds to many stressors by releasing chemical mediators. Secondly, the chronic elevation of these mediators can cause allostatic load leading to pathophysiology. The allostatic load model of chronic stress focuses on glucocorticoid dysregulation particularly glucose imbalance. Mitochondrial allostatic load defines the deleterious structural and functional changes that mitochondria undergo in response to glucose imbalance and stress related pathophysiology. Damaged mitochondria has been proved to generate toxic products and reactive oxygen species that can promote inflammation and alter gene expression 22, 23. Increased reactive oxygen species has been shown to cause DNA fragmentation 24. The tumor suppressor protein p53 play an important part in the regulation of cellular response to DNA damage. It has been revealed to have a role in sensing oxidative DNA damage 25 and perhaps this can trigger p53 dependent apoptosis in zebrafish brain.

Although there is evidence that zebrafish may be suitable to study neurobiology of human pathologies, the assessment of CUS induced apoptotic pathway in this model is scarcely characterized 26. Therefore the purpose of the study is to establish a CUS zebrafish model. We evaluated the effects of chronic stress from the gene expression of crf and gr (stress marker genes). The impact of chronic stress on zebrafish brain was also assessed from the gene expression of p53, noxa, bcl2 and casp3 which forms the death cascade.

Animals and housing: 300 Adult wild type zebrafishes of both sexes were obtained from a commercial fish supplier. The fishes were acclimatized to the laboratory conditions by maintaining them at 28 ± 2ºC, 14/10 h light/dark cycle. They were fed two times a day with commercial flakes and live shrimp provided with constant aeration 27.The fishes were accommodated in groups of 20 fishes/ 15 l of water. The fishes were segregated into two groups – control and stress induced group with 150 fishes in each. All the protocols were approved by the Institutional Animal Ethical Committee.

Chronic Unpredictable Stress Protocol (CUS): Succeeding a two – week adaptation period, the fishes were subjected to a range of chronic stressors such as restrain stress, predator stress, low water level stress (dorsal body exposure), over - crowding stress, chasing stress, cold stress and heating stress. The fishes were exposed to one of the above mentioned stressors twice a day for a period of 15 days (Table 1).

Optimum conditions were controlled during each stressor presentation. Time and sequence of stressors were altered on daily basis to prevent habituation and to promote unpredictability. A control group was also retained in the same room provided with ideal conditions for a period of 15 days. Two distinguished groups: control and stress induced group were used to evaluate the gene expression. Despite stressful conditions, no extreme harm was caused to the animals nor abnormal number of deaths witnessed.

mRNA extraction and cDNA synthesis: Zebrafishes were cryoanaesthetized and euthanized 24 hours after the CUS protocol 28. By means of the established protocol, the brains were dissected and removed 29. RNA Extraction: Total RNA was extracted from pooled adult zebrafish brain using Trizol Reagent (Sigma) in accordance with the kit’s manual (Invitrogen). The purity of the RNA was spectrophotometrically quantified. cDNA synthesis -  cDNA was synthesized from the isolated RNA by reverse transcription (iScript cDNA Synthesis Kit, BIO – RAD). Primers – The primers were designed in primer blast of NCBI. β actin was used as a control. The set of primers used are mentioned in Table 2.

Dynamic Expression of crf and gr in zebrafish brain: Recent studies 31 revealed that the 15 day CUS paradigm was successful at inducing an anxiety and related mood disorders. Our aim was to determine whether the CUS established any changes in the molecular markers of stress in zebrafish brain. Neurons in the hypothalamus in response to an environmental stressor secrete CRF. CRF is a neurotransmitter that regulates the release of ACTH which binds to the interrenal cells of the head kidney and excites the production and release of cortisol 32. In the course of HPI activation, glucocorticoid and mineralocorticoid receptors are the mediators of transcriptional effects of cortisol on the peripheral tissues. On exposure to CUS, crf and gr exhibited remarkable variations. Centrally, chronic stress differentially modulated the gene expression of crf and gr, where the expression of crf was increased and the expression of gr was decreased.

A stressful signal stimulates the secretion of glucocorticoids from interrenal cells in response to ACTH which in turn is regulated by CRF as described earlier. Glucocorticoids serve a homeostatic function in acute stress responses by providing negative feedback to brain stress circuits. Activated GR bind to DNA and regulate the transcription of genes and terminate the stress response. But repeated stress may induce long – term neural adaptations, including downregulation of gr expression 36. In the present study as predicted, zebrafish brain presented a decrease in the gene expression of gr when exposed to CUS. CUS could have downregulated the gene expression of gr by long term neural adaptations or by suppressing the gene by epigenetic modification 37, 38.

The tumor suppressor p53 induces apoptosis primarily via induction of pro – apoptotic protein phorbol – 12 – myristate – 13 – acetate – induced protein 1 (pmaip1; also known as noxa).The increase in levels of p53 protein leads to accumulation of noxa. noxa binds to bcl2 and apoptosis occurs when an apoptotic threshold is reached owing to the inhibition of bcl2. Apoptosis is driven by a highly controllable proteolytic cascade. The role of p53 function as described above is underlined from the findings of several former studies 42.

The present study was designed to evaluate whether CUS lead to p53 induced apoptosis in zebrafish brain. The effects were studied from the expression of apoptotic genes like p53, noxa, bcl2 and caspase 3. In the present study, the expression of p53 was considerably higher in the CUS induced group. This upregulation of p53 can be the result of DNA damage caused by CUS. Review studies on p53 showed that the tumor suppressor protein is a transcription factor induced by stress, which can promote cell cycle arrest and apoptosis 43. Another study has proved that rat astrocyte on exposure to severe oxidative stress caused upregulation of p53 due to DNA damage 44. These findings support the present results of p53 upregulation in the brain of zebrafish on exposure to CUS.

Recent analyses revealed that repeated unpredictable stress reduced bcl2 levels in the central nucleus of amygdala of rats 47. Also several studies have established the fact that noxa when ectopically expressed underwent bh3 dependent localization to mitochondria and interacted with anti-apoptotic bcl-2 family members and caused its inhibition 48. In the current study as expected the expression of bcl2 was greatly decreased. The inhibition of bcl2 may be due to upregulation of noxa or activation of pro – apoptotic bax and bad 49, which has not been included in this study. Pro and anti-apoptotic members of the bcl-2 family regulate mitochondrial participation in cell death 50. Earlier models have proposed that the release of cytochrome c from damaged mitochondria triggers the activation of cascade of caspases 51. 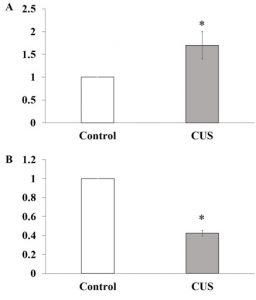 FIG. 1: EFFECT OF CUS ON THE GENE EXPRESSION OF STRESS MARKERS crf (A) AND gr (B) IN ZEBRAFISH BRAIN. The data are presented as the mean ± SD. * indicates significance compared with control (Student`s t test, *p<0.05)

In the present study as expected, the expression of casp3 was increased in the CUS induced group when compared to the control group. casp3 activation may be due to bcl2 downregulation contributed mitochondrial dysfunction, as seen in this study. Early reviews have also supported the fact that protein complexes activate the cascade of caspases in stress induced apoptosis 52. Activation of the caspase-3 pathway is a hallmark of apoptosis and can be used to quantify activators and inhibitors of “death cascade” 53. 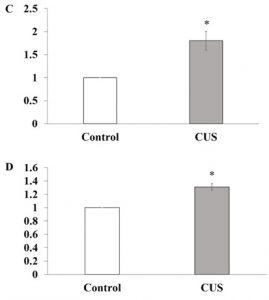 FIG. 2: EFFECT OF CUS ON THE GENE EXPRESSION OF APOPTOTIC GENES p53 (C) AND NOXA (D) IN ZEBRAFISH BRAIN. The data are presented as the mean ± SD. * indicates significance compared with control (Student`s t test, *p<0.05) 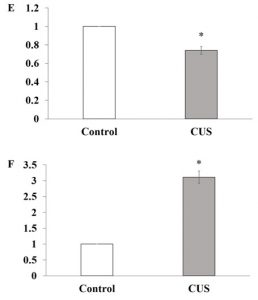 FIG. 3: EFFECT OF CUS ON THE GENE EXPRESSION OF APOPTOTIC GENES bcl2 (E) AND casp3 (F) IN ZEBRAFISH BRAIN. The data are presented as the mean ± SD. * indicates significance compared with control (Student`s t test, *p<0.05)

TABLE 1: CUS PROTOCOL IN ADULT ZEBRAFISH

CONCLUSION: In summary, we have presented evidence that exposure to CUS has well known roles in inducing apoptosis in the brain of zebrafish through p53 mediated pathway. The actual mechanism involving apoptosis in the present study might be due to DNA damage upon CUS exposure, which would have activated the death cascade. Further studies on zebrafish CUS model can enable a better understanding of stress induced neurological disorders via apoptosis.