ABSTRACT: Background: Advancement in pharmacotherapy leading the new drug discovery for the clinical problem, as well as it’s also exploring the clinical applications and Drug-Related Problem (DRP). DRP is an event or circumstances, which involving drug treatment that interfere or potentially interferes with patient achieving an optimum outcome of medical care. DRP cause significant morbidity and mortality in health care. Method: A prospective, observational study conducted was performed on 120 patients. Patient age more than 18 years of either gender and diagnosed with the psychiatry disorder were enrolled in the study. Result: Total 120 patients were enrolled and five type of DRPs were obtained during the study, ADR 24 (44.4%), drug-drug interaction 6 (11.1%), overdose 12 (22.2%), sub-therapeutic dose 6 (11.1%), failure to receive drug 6 (11.1%). Out of 103 Interventions, 54 (52.4%) suggested recommendation were accepted by the psychiatrists. Conclusion: The overall study suggested that the clinical pharmacist has a huge scope and it is an integral part of the health care team. The clinical pharmacist has greater responsibility in minimizing the DRPs in psychiatric patients and it will help in decreasing chances of comorbidities, length of stay, health care expenditure and all these factors contribute to an improved patient care.

INTRODUCTION: Drug is an active chemical entity which is present in the dosage forms; that is used for diagnostic and preventive purpose of the disease conditions 1. Advancement in pharmaco-therapy leading the discovery of new drug treatment approaches for the clinical problems, at same time it’s also exploring the clinical applications of the medicines and their Drug Related Problems (DRP) 2.

Drug related problem is an event or circumstance, which involving drug treatment that interferes or potentially interferes with the patient achieving an optimum outcome of medical care 3, 4. The Drug Related Problem is categorise as follows:

Hence, directly or indirectly DRP’s can increase the patients’ economic burden and negative impact overall quality of life of the patients 7, 8. However, DRP’s is the challenge for the health care providers because it can contribute to lead the mortality and morbidity of the patients 9. Globally, there are above 140,000 drug - related hospital admissions every year, which is indicate the problems with current practices and service delivery mechanisms and open the way for services which have been demonstrated to reduce drug - related morbidity and mortality 10. Hence, clinical pharmacist can play an important role to the contribution and management of such problem by providing the information to patient about proper use of medication, assessing and improving the adherence, assessing, reporting and resolving the DRP’s 11, 12. In this study, we planned to assess, identify, and resolve the Drug Related Problems through the help of clinical pharmacist.

Ethical Issue: Approval of the study was obtained by the Institutional ethics committee (KLEUCOP/ 287/2011-12). The study protocol was explained to the patients by the investigator orally and the patient information sheet, Informed consent form, were prepared in the Kannada, Marathi, Hindi and English which was provided to the patient. Written consent was obtained from the participants prior to the initiation of the study.

Study Design and Patient Recruitment: Study was initiated at tertiary care hospital. The study duration was 6 month and study was a prospective study. Total 120 patients were enrolled in the study. In patient age more than 18 years of either gender and diagnosed with the psychiatry disorder were enrolled in the study. Patients with multiple co-morbidities (other than psychiatric illness), pregnant and lactating women and the voluntary withdrawal were excluded from the study.

Study Protocol: Patients who satisfied the study criteria were enrolled in the study. The data of patients like Demographic data, reasons for admission and diagnosis, medications brand and generic name, dosage form, frequency, dose, route of administration, duration and indication, type of drug related problem (DRP), brief description of DRP, suggestions, clinical discussion and outcome of DRP identification was collected in suitable data collection form. DRPs was monitored, identified, assessed and analysed on daily basis which was classified as per the Cipolle's classification. In the DRP assement, proper intervention and suggestion was made by the clinical pharmacist viz; identified medication dose adjustment, drug instruction and adverse drug reaction. During the treatment patients’ Medications, altered medication and lab investigation data was collected on daily basis, later collected data was transformed in the IBM-SPSS version-20 for the statistical analysis. The suggestion provided for the DRP was in following categories: Change in drug dose, Change in dosage form, Addition of drug, Change in route of administration, Cessation of drug, substitution of drug, Change in frequency of administration, change in duration of therapy and others.

Type of Identified Drug Related Problems: There were five types of drug related problem were obtained during the study, ADR 24 (44.4%), Drug Interaction 6 (11.1%), Overdose 12 (22.2%), Sub therapeutic dose 6 (11.1%), Failure to receive a Drug 6 (11.1%). The most common DRP was found to be ADR followed by over dose, Drug Interaction, Sub therapeutic dose and failure to receive a drug. The drug which was involved in DRP was mentioned in Table 2.

Acceptance Rate of Identified DRPs: There were 103 clinical pharmacist interventions related to DRPs were proposed to the Resident Doctors and PG students and Interns. Of which 54 recommendation were accepted. The detail of proposed intervention acceptance rate for DRPs are presented in Fig. 2. 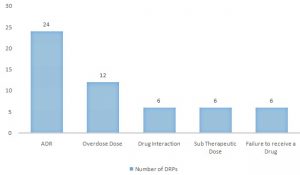 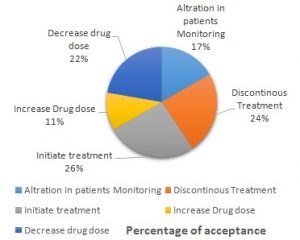 DISCUSSION: According to Australian hospital data, there are 140,000 drug - related hospital admissions each year. These data indicate problems with current practices and service delivery mechanisms and open the way for services which have been demonstrated to reduce drug-related morbidity and mortality 10. Canales et al., explained the role of clinical pharmacy services in the mental health setting, author compared the patients receiving standard pharmacy services with a group of patients who received intensive psychiatric pharmacy services. Intervention group showed significant improvements in clinical response and drug - induced extra pyramidal symptoms, and were highly satisfied with the pharmaceutical services 15.

Dorevitch A et al., proposed 229 recommendations for 109 patients. Of which, 130 cases (57.6%) there were recommendations for adding a new drug or discontinuing a current one; in 67 cases (29.3%) the recommendations were for increasing or decreasing the dose of a medication; and in 21 cases (9.2%) recommendations were for requesting laboratory tests or monitoring 16. Ramesh A et al., identified the DRPs in 108 patients. The frequency of drug related problems was 1.54 per patient. The highly reported drug related problem was drug -drug interactions (25.0%) followed by drug use without indication (15.0%) and adverse drug reactions (15.0%). Majority interventions (97.9%) were accepted by the health care professionals 17.

For assessing good quality of result clinical pharmacist was attend daily ward rounds with consultant psychiatrist in psychiatry ward to identify Drug related problems and evaluated the quality of clinical interventions adopted. Patients were monitored from the day of admission till the day of discharge for DRP’s and also for the assessment of quality healthcare management of psychiatric patients. Out of 103 interventions, 54 (52.4%) suggested recommendation were accepted and rest of were not accepted. This might because the physicians were hesitant to change the prescribed medicine immediately because the suggested intervention were thought to be insignificant.

CONCLUSION: The overall study suggested that, the clinical pharmacist has a huge scope and it is an integral part of healthcare team. The clinical pharmacist has greater responsibility in minimizing the DRPs in psychiatric patients and it will help in decreasing chances of comorbidities, length of stay, health care expenditure and all this factors contribute for an improved patient care.

CONFLICT OF INTEREST: All authors have an equal conflict of interest.