INTRODUCTION: Cyanobacteria are being used for the extraction of C-PC and recently also considered as a source of PHB. They are the simplest known photoautotrophic organisms that accumulate PHB as energy storage. Due to photosynthetic consumption of CO2 by cyanobacteria, they altering earth’s atmosphere and leading to the production of oxygen gas 1. Cyanobacteria produce several bioactive compounds that have antibacterial, antifungal, antiviral, and antialgal properties of pharmaceutical and agricultural significance 2.

For the production of valuable metabolites several microorganisms have been utilized in the past although the potential of cyanobacterial species for many of the metabolites are largely unexplored 3. Recently it has been demonstrated that (S) and (R)-3HB (precursor of biodegradable plastic) can be photosynthetically produced from source of sunlight and CO2 4. However, it is well known that PHA is a natural energy and carbon storage product of prokaryote 1.

Cyanobacteria are also being used for extractions of C-phycocyanin 9, 10. As cyanobacteria have short generation time and photoautotrophic in nature attract the attention to produce PHA and C-PC. Extraction and purification of C-PC has been reported from different cyanobacterial strains 11, 10. Recently work revealed that C-PC have protective effect against acute lung injury induced by lipopolysaccharide 12. CPC have therapeutic effect against pulmonary fibrosis 13, also used as food 14, coloran 15, fluorescent dye 16, and antimalarial activity 17. C-PC also functions in antioxidation 16 and have antitumor 18, immunity enhancement 19, antioxidant and antiproliferative activities 20.

The work on cyanobacteria for PHB extraction has been well reported by many researchers 21, 22, 23. More recently, PHB accumulation found up to 46% under chemo-heterotrophy and phosphate limitation 23. Recently there is a report for improvement of solar energy conversion efficiency by enhancing natural photosynthesis 24, if it happens it would be very useful to increase C-PC and PHB production.  Specific objectives of the present study, is to explore the extraction of C-PC followed by PHB extraction from the Nostoc muscorum and also the impact of carbon sources on C-PC and PHB production.

Detection and confirmation of poly-β-hydroxybutyrate (PHB): The spectrophotometric assay was performed following Law and Slepecky (1961) 29. The sample containing the polymer in chloroform was transferred to a clean test tube. The chloroform was evaporated and concentrated H2SO4 (10 ml) was added, heated in a boiling water bath (10 min). Detection and confirmation of PHB was also done gas-chromatographically following Riis and Mai (1988) 30 using a Gas Chromatograph (Perkin Elmer, Shelton, CT, USA). The extracted polymer isolated from 20 ml biomass suspended with 2ml 1,2-dichloroethane, 2ml propanol containing hydrochloric acid (1:4, v/v), standard solution (4%, w/v) the samples were shaken for 30 sec. After 24 h, organic phase was directly analysed. Mixotrophic growth conditions were achieved by supplementing the nutrient media with 0.2 and 0.4% of glucose, fructose, maltose, sucrose, and acetate at the time of incubation.

RESULTS: Detection and confirmation of C-PC and PHB from N. muscorum grown under photoautotrophic mode were analyzed. (Fig. 1A).

The polymer extracted from N. muscorum and the standard PHB after acid digestion represented in Fig. 1B, both the spectra depicted complete matching. PHB and C-PC content with reference to growth under batch mode is presented in Fig. 1C.

FIG. 1: (A) ABSORPTION SPECTRUM OF C-PC (B) SPECTRA OF PHB EXTRACTED FROM N. MUSCORUM 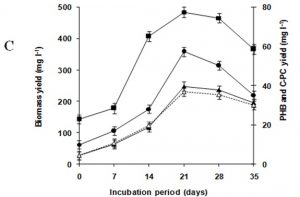 Effect of acetate: Cultures supplemented with acetate depicted significant rise in biomass and PHB content. Biomass yield reached only upto 512.2 mg l-1 under 0.4% acetate supplementation as compare to 484 mg l-1 on day 21 of incubation (Fig. 2A)

FIG 2.1: RELATIONSHIP BETWEEN (A) BIOMASS AND C-PC YIELD (B) BIOMASS AND PHB YIELD OF N. MUSCORUM UNDER ACETATE SUPPLEMENTATION

FIG 3.1: RELATIONSHIP BETWEEN (A) BIOMASS AND C-PC YIELD (B) BIOMASS AND PHB YIELD OF N. MUSCORUM UNDER FRUCTOSE SUPPLEMENTATION

When this yield was compared with PHB yield without C-PC extraction (130 mg l-1 in 0.4 % fructose and 111 mg l-1 in 0.2% fructose supplementation, respectively), biomass and C-PC yield was more significant than biomass vs PHB yield (Fig. 3.1 A and B).

When PHB and C-PC was extracted simultaneously, PHB yield was found 123 mg l-1 and 111 mg l-1 under 0.4% and 0.2% glucose-supplementation, respectively. C-PC yield increased up to 140 mg l-1 under 0.4% glucose supplementation which was 2.5 fold higher than the control condition (57 mg l-1). C-PC accumulation was significantly correlated to biomass yield (Fig. 4.1 A).

FIG 4.1: RELATIONSHIP BETWEEN (A) BIOMASS AND C-PC YIELD (B) BIOMASS AND PHB YIELD OF N.    MUSCORUM UNDER GLUCOSE SUPPLEMENTATION

FIG 6.1: RELATIONSHIP BETWEEN (A) BIOMASS AND C-PC YIELD (B) BIOMASS AND PHB YIELD OF N. MUSCORUM UNDER SUCROSE SUPPLEMENTATION

DISCUSSION: The Cyanobacteria (photoautotrophic) is promising eco-friendly microorganism as the ‘green house gas’ is photosynthetically converted into biodegradable

plastics and C-PC by utilizing sunlight as the energy source. The positive impact of acetate, fructose, glucose, maltose and sucrose was found on PHB accumulation. Interestingly, in the acetate-supplemented cultures, an insignificant correlation with growth was established (r = 0.883, P > 0.05).

The availability of PHB precursor i.e. acetyl-CoA causes the enhanced PHB pool up to 141 mg l-1 under 0.4% acetate-supplemented cultures 31, 32. The availability of carbon influenced the accumulation of C-PC in N. muscorum. Carbon supplementation resulted in accumulation of relatively high cellular C-PC contents and maximum was found 146 mg l-1 under 0.4% fructose supplemented condition.

The growth and biomass concentration increases after the addition of glucose and acetate in Spirulina platensis culture 33. More recently, much attention has been drawn to the potential use of cyanobacteria to extract high value chemicals. In this study, maximum C-PC and PHB yield were observed in 0.4% fructose supplementation followed by 0.4% glucose supplementation. Fructose has maximum stimulatory effect on simultaneous C-PC and PHB yield.