ABSTRACT: Obstructive sleep apnea (OSA) has been increasingly linked with cardiovascular risk factors. Mechanisms such as increased sympathetic activity and endothelial dysfunction have been implicated. There are many factors which are responsible for the cardiovascular morbidity in OSA patients they are Obesity, C-reactive protein (CRP) and lipid profile. To study the impact of nasal continuous positive airway pressure (nCPAP) treatment on CRP levels in OSA patients. Average AHI of each subjects was; Mild OSA 11.02±2.62 Events / hour, Moderate OSA 22.48±3.90 Events / hour and Severe OSA 55.12±21.04 Events / hour. Out of 141 patients 110 were male (78.09%) and 31 were female (21.98%). The mean age of male and female in the study population was 52.22±5.12 and 49.11±4.12 years respectively. The average BMI for OSA patients was 31.48±6.8 kg / m2. A significant association was found between AHI and BMI (r=0.195 and p<0.02).  Serum levels of CRP during baseline and after 6 months of nCPAP treatment were compared. The mean values of CRP of the study population were 8.45±4.30.32 mg/l. Our result also revealed that there was a significant association between AHI and CRP (r=0.529, p<0.0001) BMI (r=0.220, p<0.05). There was a significant difference between CRP levels before and after six months of nCPAP treatment (p<0.05). The present study confirmed that elevated serum CRP levels were most commonly seen in obese obstructive sleep apneic patients. It also suggests that elevated CRP levels can be decreased by nCPAP treatment

INTRODUCTION: Obstructive sleep apnea (OSA) is a significant public health problem characterized by repetitive episodes of upper airway occlusion during sleep associated with sleep fragmentation, daytime hypersomnolence, and increased cardiovascular risk 1. OSA has been increasingly linked with vascular risk factors. Mechanisms such as increased sympathetic activity and endothelial dysfunction have been implicated. There are many factors which are responsible for the cardiovascular morbidity in OSA patients they are Obesity, C-reactive protein (CRP) and lipid profile 2.

Markers of inflammation are increased in OSA; include CRP, TNF-α and other cytokines. Granulocytes CD4 and CD8 T cells show signs of activation; their interaction with the endothelium may promote atherogenesis 3. Recent epidemiological studies suggest that CRP is an important risk factor in atherosclerosis and coronary artery disease 4. Inflammation in turn contributes to oxidative stress by enhancing granulocyte superoxide production, an effect reversible by nCPAP (nasal continuous positive airway pressure) treatment.

Resulting activation of the rennin-angiotensin-aldosterone system contributes to hypertension. Increased levels of fibrinogen involved in inflammation lead to increased blood viscosity as a co-factor for vascular complications. Platelet activation and silent brain infraction have been described in OSA as risk factor for stroke. Previous studies found that circulating markers associated with cardiovascular morbidity, such as high-sensitivity C-reactive protein, homocysteine and serum lipids, have been found to be elevated in patients with OSA (4). Studies show that nCPAP treatment reduces elevated CRP levels 5.

Participants: Patient with excessive day time sleepiness, heavy snoring, air obstruction, breathlessness, and       had never been treated for OSA and were taking no medications were included in the study and they underwent polysomnography.  Patients with other co morbidities were excluded. This study protocol was approved by the Ethics Committee of Kovai Medical Center and Hospital and written informed consent was given by all patients prior to enrolment.

Polysomnography: All enrolled subjects were underwent an overnight sleep study started at 10 pm and ended at 6 am with the use of a computerized polysomnogram system (Somnologica). The surface electrodes were applied using standard techniques and following signals (EEG), Electrooculogram (right & left): Submental electromyogram and anterior tibialis electromyogram additionally, EEG and heart rate were recorded    simultaneously.

Snoring was recorded by a microphone placed at the jugular vein, and airflow was recorded combined oronasal thermistors, while arterial oxyhemoglobin saturation was recorded by a finger pulse oximeter. Thoracic cage and abdominal motion were recorded by inductive plethysmography. Apnea was defined as a complete cessation of air flow lasting >10s: Hypopnea was defined as discernible fall in air flow lasting ≥ 10s accompanied by a decrease in oxygen saturation of atleast 3% or by an EEG-recorded arousal. Apnea Hypopnea Index (AHI) was defined as the total number of apneas and hypopneas occurring per hour of EEG sleep. Patients with pure or mainly central apneas were excluded from the study.

Patients and Predictive Factors: A total of 182 subjects underwent polysomnography  and  subjects with Apnea Hypopnea Index         ≥5 are considered as OSAS and AHI<5 are Non-OSAS. In our study we found that 141 subjects were   obstructive sleep apnea syndrome and 41 subjects were Non-OSAS. The remaining 41      subjects with     AHI<5 were excluded.   The BMI for each patient was obtained by dividing weight in kilograms by height in meters squared. Based on the world health organization for the South East Asia region BMI ≥ 25kg / m2 were considered as obese.

Biochemical Analysis: Venous blood samples were collected at (8am to 10 am) the fasting state just after polysomnography was performed. Then the samples were centrifuged immediately at 3000g for 5 min. After centrifugation the serum aliquots were frozen and stored at –80°C. A serum level of CRP was done by immunoturbidimetry assay.

There was a significant difference in BMI’s of the moderate versus severe group (p<0.004). A significant association was found between AHI and BMI (r= 0.195 and p<0.02) . 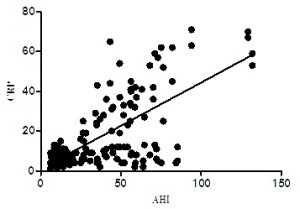 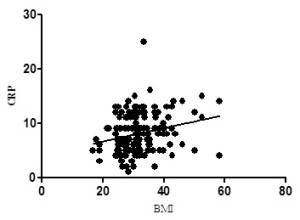 Previous studies in middle aged and elderly persons have reported a positive association between BMI and CRP concentration 4. Evaluation of the relative strength of association using multiple regression analysis between CRP and AHI, CRP and BMI showed that CRP levels were independently associated with AHI. There by obesity is also one of the risk factor for elevated CRP levels in OSA patients. CRP is thought to be an indication of systemic inflammation associated with atherosclerosis. Obesity is additional triggering factor with OSA in future cardiovascular events 7.  The baseline CRP level was 7.89±3.5 and after nCPAP therapy 7.84±3.56 mg/l. There was a significant difference between CRP levels before and after nCPAP therapy (p<0.05).

C - Reactive protein is another important risk factor for the development of atherosclerosis8 C-reactive protein is a sensitive marker of inflammation and several studies have demonstrated an independent relationship between OSA and elevated CRP levels 9,10 Elevated CRP levels in OSA patients are again supported by Murat Can et al 11 and Sanders 12 MH, who have the same observations. Elevated serum CRP levels are independently correlated with the severity of OSA. The present study shows the serum level of CRP was elevated in patients with OSA than in non OSA group. In the present study 66.28% (n=116) of patients had elevated levels of CRP. Elevated plasma levels of CRP in the concurrent presence of the metabolic syndrome in subjects with OSA.

This study was supported by Babak Amra et al 13. In the present study, correlation was found between CRP and AHI and CRP and BMI. The levels of CRP significantly improved with nCPAP therapy.  Elevated levels of CRP were associated with obstructive sleep apnea patients and reported in several studies 14-17. A recent epidemiologic study has shown that enhanced levels of CRP are strong independent predictor of risk of future myocardial infarction, stroke, peripheral arterial disease, and vascular death among persons without known cardiovascular disease 18. This is in confirmation with other workers who have inferred that OSA is associated with elevated levels of CRP, a marker of inflammation and of cardiovascular risk.

Shamsuzzaman et al., reported elevated CRP levels in patients with moderate and severe OSA. The hypoxia and sleep disturbances in OSA may contribute to elevated CRP in patients with OSA. Several recent studies have indicated that CRP and proinflammatory cytokines such as interleukin-6 are elevated in OSA as well as obesity 11, Yoko 19,  Sanders 11, Carpag 20, Inoue 21 reported, that elevated CRP concentrations are linked with increased mortality due to coronary heart disease 22,23. Inflammation is thought to play a major role in most of these effects, often encountered in subjects with OSA.  It is quite common that OSA patients also have the metabolic syndrome, wherein elevated plasma CRP levels further increase the risk of cardiovascular complications.

Our finding shows that CRP may be an independent risk factor in patients with mild to moderate OSA for long term prognosis future cardiovascular events and the treatment of OSA provides benefits to the patients.  In our study we observed decrease in CRP levels in OSA patients after 6 months of nCPAP therapy. In our study and in accordance with Yokoe et al we support the idea that CPAP use decreases serum CRP levels.

ACKNOWLEDGEMENTS: The study was supported by Dr. Nalla G. Palaniswami and Dr.Thavamani D Palaniswami, Kovai Medical Center Research and Educational Trust, Coimbatore. India. We are grateful to Dr.V.R. Pattabhi Raman and Dr. Mahadevan, Department of Interventional Pulmonology and Sleep medicine, Kovai Medical Center and Hospital, Coimbatore, India. We would like to thank the Department of Pharmacy Practice, KMCH college of Pharmacy, Coimbatore, India for their help and support at various stages of this research.