IMPACT OF TRADE AND TRIPS ON AFFORDABILITY OF MEDICINE IN TANZANIA

IMPACT OF TRADE AND TRIPS ON AFFORDABILITY OF MEDICINE IN TANZANIA

To meet healthcare demands and costs, Tanzania depends largely on imports and financial aid from foreign countries. Current research analyses the impact of market competition on the cost and availability of medicine in Tanzania. Product approvals granted by Tanzanian drug regulatory authority were analyzed on the basis of exporting countries, molecules and therapeutic categories. The market competition among various countries was analyzed using UN trade statistics database ‘Comtrade’. Our analysis revealed that India offers large number of competing vendors per molecule and has the highest average share in the product approvals granted in all major therapeutic categories. The analysis also reveals that most of the currently used second line therapy molecules that are essential for Tanzania are protected by patents and the country needs to consider utilization of TRIPS flexibilities to improve accessibility and affordability of medicine.

INTRODUCTION: Currently Africa is afflicted with increasing morbidity and mortality rates due to chronic diseases and the continent has a very high burden of infectious diseases which account for around 69% of deaths on the continent 1. This perhaps is an indicator of non-affordability and accessibility of newer therapies. The World Health Organization (WHO) projects that over the next ten years, Africa will experience increase in death rates from cardiovascular diseases, cancer, respiratory diseases and diabetes 2. An estimated 80% of the regional health budgets have been allocated to communicable disease during the last decade 3,  4.

Tanzania is currently among the countries with a very high health burden. Approximately 5% of the HIV/AIDS population of Africa live in Tanzania 5. The coverage of antiretroviral therapy (ARV therapy) among the people with advanced HIV infections is only 14% 6 and the country ranks 15th in the list of 22 high-burden tuberculosis (TB) countries in the world. Tanzania, in terms of population, is the 7th largest country in African region and 30th largest in the world. The country is among the 49 least developed countries (LDCs) of the world 7.

It is a known fact that certain categories of products such as parenterals, anticancer drugs, and hormone preparations require dedicated facilities. The investments in such GMP compliant facilities are of the order 5 to 25 million, at the least.

The country, therefore, depends largely on imports to meet the healthcare demands. Tanzania imports about 70% of the national drug requirement 8. Further the country largely depends on foreign aid for meeting its healthcare costs. A study by the International Labor Organization (ILO) has shown that during 2002–2006, donor funding contributed to 45% of the national health care system financing 9. As per WHO statistics, the share of Government in the total expenditure on health was only 59%6.

Current research therefore, attempts to identify the impact of competition among various supplier countries and WTO TRIPS agreement on the cost and availability of medicine in Tanzania.

RESEARCH METHODOLOGY: All the Marketing Authorizations were collected from the online database of Tanzania Food and Drugs Authority (TFDA) and analysis of approvals granted for various molecules, products, companies and countries was done to identify major supplier countries and their product portfolio. Therapeutic category-wise analysis of approvals was also undertaken to establish the country and company focus in the market.

To analyze trends in the supply of medicines, the country’s trade in formulations, bulk drugs, export & import statistics were collected from United Nations trade database ‘Comtrade’, under the list ‘Pharmaceuticals and medicaments cluster’ 10.

Global Price Reporting Mechanism (PRM) database of WHO was used to identify the molecules supplied by various international agencies 6. Secondary research was also carried out to identify relevance of TRIPS flexibilities to Tanzania in improving accessibility and affordability of medicine.

During the research, several data validation and data checking steps were undertaken to ensure accuracy. Data were analyzed using spreadsheets (MS Excel).  Results were cross-checked and data validation was performed. 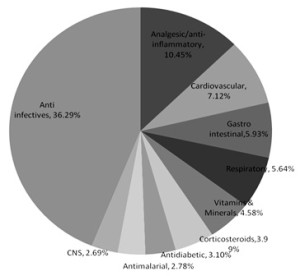 It is found from the analysis that, product approvals of anti-infectives alone constituted 36.29% of all authorizations. Anti-infectives, analgesic/anti-inflammatory, cardiovascular, gastro-intestinal and respiratory drugs for around 65% of all approvals received (fig. 2). 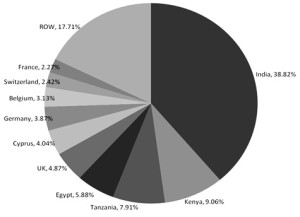 India has the largest number of product approvals in all the top 15 therapeutic categories with the largest number of approvals in Anti-TB, anti-retroviral drugs, electrolytes, biologicals and gastro intestinal drugs (table 1). For several essential medicines (SEG and NEDLIT, 2010), India has a very high proportion of companies that were granted product approvals vis-à-vis rest of the world. For example, for Ciprofloxacin, India accounts for around 47.92% of companies that received approvals from TFDA, 37.84% in case of Diclofenac and 36.67% for Amoxicillin (table 2).

Due to this large number of vendors per molecule, cost of procurement from India was substantially lower than from the other countries.

The largest generic manufacturer of India viz., M/s. Cipla, the company responsible for revolutionizing anti-retroviral therapy 11 holds the highest number of product approvals in Tanzania. The company has approximately 5% of the total approvals. Only three innovator companies viz., GlaxoSmithkline, Sanofi-Aventis & Bristol-Myers Squibb are present among the top twenty. Except GlaxoSmithkline, all other innovator companies are mainly focusing on lifestyle and non-communicable diseases such as cardiovascular, cancer, psychotherapeutics, anti-diabetics, etc.

Analysis of Pharmaceutical Imports of Tanzania: As per trade statistics available from UN Comtrade, in the year 2008 Tanzania imported around US$ 198 million worth formulations (table 3) and bulk drugs from approximately 41 countries that have reported their trade statistics. Imports grew at a compounded annual growth rate of 23.24% during the five year period from 2004 to 2008. Exports were valued at US$ 3.15 million in 2008. The market size is therefore estimated at around US$ 270-290 million.

TABLE 3: BILATERAL TRADE OF TANZANIA IN PHARMACEUTICALS (IN US$ MILION)

Analysis of major supplying nations of bulk drugs and formulations to Tanzania reveals that India is a major supplier of pharmaceuticals (formulations & bulk drugs combined) accounting for over 30% of the country’s imports followed by France, Kenya, Switzerland and China. The imports from India have been growing at a rapid Compounded Annual Growth Rate (CAGR) of 35.09% during 2004-08. However, Europe accounts for 44.56% (table 4) of the country’s pharmaceutical imports with three top European countries viz., France, Switzerland and UK accounting for up to 37%.

Asia is the second largest supplying region accounting for over 39% of the total country imports with India and China accounting for nearly 97% of the supply from this region.

TABLE 3: REGION-WISE IMPORTS OF PHARMACEUTICAL PRODUCTS BY TANZANIA (IN US$ MILLION)

TABLE 5: FORMULATIONS IMPORTS OF TANZANIA FROM VARIOUS PARTNER COUNTRIES (IN US$ MILLION)

TABLE 6: BULK DRUG IMPORTS OF TANZANIA FROM VARIOUS PARTNER COUNTRIES (IN US$ MILLION)

Imports from Europe have been facing a formidable competition from India which has emerged as a major player by virtue of its chemistry, regulatory and compliance capabilities 12. India accounted for one out of every four Abbreviated New Drug Application (ANDA) approvals in the years 2007 and 2008, ranked first in total Type II active Drug Master Files (DMFs) with US Food and Drug Administration 13, 14. The country’s manufacturing costs are 65% lower than those of North America 6.

An interesting fact emerges from the analysis of average import price from various supplier countries (table 7). In 2008, the average value of imported pharmaceutical product (formulations) from India was around US$ 8.58 per unit compared to Tanzania’s average value of US$ 14.61 per unit. This implies that the country saved approximately US$ 6.03 per unit through generic imports from India which translated to a total savings of US$ 38.41 million in 2008 and US$ 62.63 million in 2007 in the import bill of Tanzania. On the other hand average unit price of imports from France were as high as US$ 534.94 per unit and those from Switzerland are at US$ 64.13 per unit.

TABLE 7: SAVINGS ACHIEVED IN IMPORT BILL OF MEDICINES BY TANZANIA

Impact of TRIPS on Availability and Cost of Medicine: It is a well-known fact that , patients suffering from diseases like HIV, AIDS, Cancer, TB develop resistance to first line drugs upon prolonged treatment, and therefore need arises for second line/higher line therapies 15.

Our research revealed that currently in Tanzania, most of these second line/higher line therapies are protected by patents held by innovator companies. There are 98 molecules registered by TFDA, each by one innovator company. All these are second line therapy drugs or Advanced molecules which are essentially required in the situation currently prevailing in Tanzania.

Out of these molecules the study of 25 molecules selected randomly from 7 different therapeutic categories, indicate that only 3 molecules pertaining toARVs (2) and anti-malarial (1) are being supplied through global agencies (table 8).

CONCLUSION: Currently Tanzania is laden with high health burden due to lack of domestic manufacturing capabilities or economic strength and hence is highly dependent on the imports to meet healthcare demands. Most of these second line/higher line therapies in Tanzania are protected by patents held by innovator companies 16. It must also be noted that diseases like Cancer, Cardiovascular, Infectious, Metabolic disorders, etc., are as serious as HIV, malaria or tuberculosis. But currently, ARVs, anti-malarials and anti-TB drugs supplied by global NGOs are only first line drugs 17. They are not providing high cost second line drugs due to their high costs of production 18.

It therefore, appears that between encouraging drug discovery through market monopolies by innovator companies and saving lives, they have chosen the former. The TRIPS agreement provides three flexibilities to improve access for essential innovator drugs viz., parallel imports, compulsory Licensing and bolar provision. But, these safeguards are not applicable until they are written into national law of the corresponding country. TRIPS flexibilities are currently not included in the Tanzanian law and therefore the country is not able to make use of these flexibilities.

As Tanzania has already been granted exemption from complying with TRIPS agreement till 2016, it has the opportunity to promote domestic manufacturing of the molecules patented elsewhere in the world. But the country has not availed this advantage also till now and Tanzania has not issued any compulsory license (CL) till date. This is in sharp contrast to Canada which has issued 662 Compulsory Licenses so far.

In the light of the above findings, we suggest that Tanzania needs to consider the flexibilities in TRIPS agreement to lower the cost of medicines, especially for advanced/innovator molecules before this option becomes non-available. Perhaps India being the largest and the most economical supplier, it plays a key role in reducing the health care burden of Tanzania. The comments of UNITAID Executive Secretary Jorge Bermudez, that “If Indian companies cannot meet these demands of supplying the lifesaving medicines due to product patent, a lot of the progress we have made in the last seven years will be reversed” 19 therefore assume relevance for Tanzania.