Transdermal Drug Delivery System: Transdermal delivery of drugs through the skin to the systemic circulation provides a convenient route of administration for a variety of clinical indications 1. Transdermal drug administration generally refers to topical application of agents to healthy intact skin either for localized treatment of tissues underlying the skin or for systemic therapy. For transdermal products the goal of dosage design is to maximize the flux through the skin into the systemic circulation and simultaneously minimize the retention and metabolism of the drug in the skin 2. The skin consisting of lipid structure provides a significant barrier to the penetration of highly lipophilic drug into blood. The entrapments of drug through skin are shown in figure 1 3.

Intensive research has shown that transdermal route is a potential mode of developing lipophilic drugs in systemic circulation 4. Transdermal drug delivery system to be effective, the drug must obviously be able to penetrate the skin barrier and reach to target site 5. The different drugs administered in the conventional patches are shown in table 1 6. 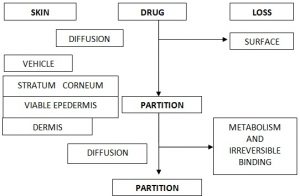 However, it is light sensitive with decarboxylation, especially in the presence of oxygen 10, 11. Ketorolac tromethamine are administered either in the form of oral tablet, or in injected dosage form. Ketorolac is not available on the Pharmaceutical Benefits scheme 12, 13.

Entrapment of Ketorolac tromethamine drugs in the form of TDDS: Ketorolac is a nonsteroidal anti-inflammatory drug with potent analgesic and moderate anti-inflammatory activities by inhibiting prostaglandin synthesis 14, 15. The transdermal delivery of ketorolac   tromethamine plays a vital role in the therapeutics action of the drugs.  To avoid invasive drug therapy such as injections and to eliminate frequent dosing regimen with oral administration, a transdermal drug delivery system has been studied as an alternative dosage form.

In addition to the noninvasive therapy and maintaining the drug blood levels for an extended period of time, the transdermal delivery system has several advantages: it avoids first-pass metabolism, it is easy to discontinue the administration, and it reduces side effects. Despite these advantages, only a limited number of drugs can be administered percutaneously, due to low skin permeability of most drugs through the skin. The stratum corneum was recognized as an excellent barrier against skin penetration. To overcome this problem, vehicles, penetration enhancers, and electron transport facilitated transdermal systems have been attempted in the development 16, 17, 18.

Advantage of Ketorolac Tromethamine in TDDS: As if oral bioavailability of ketorolac was reported to be 90% with a very low first-pass metabolism, its short biological half-life (4–6hr) insisted many adverse effects, such as upper abdominal pain and gastrointestinal ulceration, restricted for oral administration 19. By then, the concept regarding delivery of ketorolac in the form of transdermal delivery has been suggested.  Yu et al describes percutaneous absorption of ketorolac and ketorolac tromethamine in Rhesus monkeys using a number of solution formulations. Two vehicle combinations (propylene glycol and linoleic acid, and propylene glycol and oleic acid) were shown to be effective in enhancing percutaneous absorption of both ketorolac and ketorolac tromethamine. High C max values were achieved within 8 hours 20.

Concept regarding the Formulation of Ketorolac Tromethamine TDDS: The physiological properties of the drug and the material used in the TDDS such as molecular mass, lipid/water partition coefficient and solubility constraint in the subcutaneous influence transdermal permeation 21. More widely it is found that most of the NSAIDS drugs get influenced by lipid/water partition coefficient to predict the bioavailability at constant solubility 22. The lipid protein partitioning (LPP) theory has been formulated to describe the potential modes of action of penetration enhancer. More commonly used penetration enhancer are listed in table 2 23.

Side Effects: Side effects of Ketorolac tromethamine cannot be anticipated. Only a medical practitioner can determine if it is safe for you to continue using Ketorolac or not. Generally the side effects that are seen to the initial phase are diarrhea, dizziness, drowsiness, headache, indigestion, nausea, stomach and intestinal pain, swelling due to fluid retention 39. In patients taking ketorolac or other NSAIDs in clinical trials, the most frequently reported adverse experiences in approximately 1% to 10% of patients are listed in table 3.

Necessary precaution taken for a patient: Ketorolac may infrequently cause serious (rarely fatal) bleeding from the stomach/intestines. Also, drugs related to ketorolac have caused blood clots to form, resulting in serious possibly fatal heart attacks and strokes. Ketorolac must not be administered in labor, breast-feeding, or have stomach/intestinal problems (e.g., ulcers, bleeding), severe kidney problems, severe loss of body water (dehydration), or bleeding/clotting problems. It must be avoid before/after heart bypass surgery or before any surgery. Do not use ketorolac with high doses of aspirin or with other Nonsteroidal anti-inflammatory drugs (NSAIDs).

CONCLUSION: The use of the transdermal route has been well established since the 1800s as safe and effective drug delivery devices. Due to recent advances in technology and the ability to apply the drug to the site of action without rupturing the skin membrane, transdermal route is becoming a widely accepted route of drug administration. Transdermal drug delivery technologies are becoming one of the fastest growing sectors within the pharmaceutical industry. Their potential role in controlled release is being globally exploited by the scientists with high rate of attainment, thus concept of administration of drug through transdermal route approaches successful enhancement of a drug as like ketorolac tromethamine. As if it posses a low incidence of side effect and its easy availability makes a good administration of analgesic by transdermal drug delivery system.