ABSTRACT: Human adipose tissue-derived stem cells (hADSCs) are promising for cellular therapy as they are multipotent, which consistently express high CD90, CD105, CD73 and low hematopoietic surface markers. Flow cytometry is a routine technology that is used in most laboratories and can be used to study hADSC characterization, but the instrument needs strict calibration to assure the quality of the results. However, for rarely used fluorophores, calibration is often neglected. This study aimed to compare calibrated and non-calibrated fluorescence (FL) in flow cytometry performances. hADSCs were isolated from lipoaspirate and cultured in human platelet lysate supplemented medium. Passaged cells were used for characterization. Cells stained with positive (CD90-FITC, CD105-PerCP Cy5.5, CD73-APC) and negative (CD34, CD45, CD11b, CD19, HLA-DR)-PE marker cocktails were subjected to flow cytometry analysis. In the instrument, FITC, PE, PerCP- Cy5.5, and APC were detected by FL1, FL2, FL3, and FL4 respectively. Routine calibration of FL1, FL2, and FL3 was done, except for FL4. Therefore, data from calibrated and non-calibrated FL4 were analyzed. hADSCs strongly and consistently expressed CD90, CD105, and negative surface markers at averages of 94.6%, 90.5%, and 2.8% respectively, hence in line with ISCT guidelines; in contrast to CD73 (FL4), whose average was 42%. Characterization of calibrated FL4 showed very good results on CD73 (above 94%), but not in non calibrated FL4, which showed inconsistent results, as values ranged between 0% - 82%. In conclusion, routine calibration of FL1, FL2, FL3, and FL4 is important to get a reliable result.

They have multi-potential capacity to differentiate into osteogenic, chondrogenic, and adipogenic lineages, and consistently  highly express positive stromal surface markers, i.e. CD90, CD105, CD73  (≥95%) and show low expression of  hematopoietic surface markers (≤ 2%), which is in accordance with International Society and Cell Therapy (ISCT) guidelines. 2 However, according to data that was collected by Investigational New Drug Applications – (INDs) for Mesenchymal Stem Cell-Based product to FDA, 3 from 66 studies, the average values of positive surface marker expressions were 88 ± 7.54%, 87 ± 7.17%, and 86 ± 7.24% for CD105, CD90, and CD73 respectively. Moreover, from nine studies, the average value of negative surface markers was 9 ± 6.56%. 3

As cellular therapy products (CTPs) for regenerative medicine, the quality of the product should be controlled. Therefore, it is necessary to characterize the product including identification of phenotype markers. 4 Identification of surface markers can be done using immunocytochemistry or flow cytometry. 5

Flow cytometry is one of the powerful tools to identify the surface marker phenotype of hADSCs. Our previous study used flow cytometry to identify surface markers of hADSCs. 6 However, operation of flow cytometry should follow quality control procedures to maintain high performance of the instrument.  Calibration is one of the steps of quality control procedures and strictly needs to be performed to assure the quality of the results.7 However, for rarely used fluorophores, calibration was often neglected. Therefore, this study aimed to compare calibrated and non-calibrated flow cytometry performances.

MATERIALS AND METHODS: This is a descriptive study that compared calibrated and non-calibrated flow cytometry performances, that was done in July 2015 through July 2016 in the Department of Biology for isolation and culture of hADSCs, and in Integrated Laboratory, Faculty of Medicine Universitas Indonesia for flow cytometry analysis.

Materials: hADSCs were isolated from lipoaspirate of 3 donors (Ps-1, Ps-2, and Ps-3) as described previously, 8 and cultured in human platelet lysate supplemented medium (Fig. 1). Passaged cells were used for characterization. 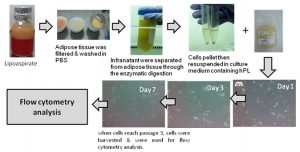 Flow cytometry analysis: Flow cytometry analyses were assessed using FACS Calibur Flow cytometer (Beckton Dickinson, USA). Each analysis was performed on 10.000 cells (10.000 gated events). Unstained cells were used to determine gating of cell population of interest and to eliminate debris. Positive and negative isotype controls were used to determine the base line. Ps-1 were analyzed at July 2015 (FL4 calibrated), while Ps-2 and Ps-3 were analyzed at November 2015 and April 2016 (non-calibrated FL4), respectively. FL1, FL2, and FL3 was frequently calibrated and was done using Calibrite beads 3-color kit that contained three different colors of BD calibrate beads, i.e. FITC-labeled, PE-labeled, and Per CP-labeled beads, and unlabeled beads. APC-labeled beads, which was available separately was rarely used and calibration was often neglected.

Further, data from calibrated and non-calibrated FL4 were collected and tabulated. In other well cultures, prolonged hADSCs culture was also done until 21 days as was described in a previous method, 6 with the same medium and same condition with cell culture that was used for flow cytometry to show spontaneous chondrogenic differentiation capacity.

RESULTS: We found that hADSCs strongly and consistently expressed CD90 and CD105 at averages of 94.6% and 90.5% respectively. Moreover, hADSCs expressed hematopoietic surface marker only 2.8% (Table 1). These results were in line with ISCT guidelines and INDs – FDA.2, 3 However, the expression of CD73, which was conjugated with APC and detected by FL4 channel showed an average of only 42%. Characterization of hADSCs in calibrated FL4 showed very good results of CD73 that was above 94% (in July 2015), but not in non-calibrated FL4 (in November 2015 and April 2016), which showed inconsistent results, as values ranged in between 0% - 82% (SD= 42) (Table 1). When we do flow cytometry in November 2015, CD73 in all tubes were not detected (0%) and in April 2016 the CD73 expressions were inconsistent. We also found that hADSCs underwent spontaneous chondrogenic differentiation (Fig. 2), which was confirmed by alcian blue staining, which proved differentiation capacity of our cells. 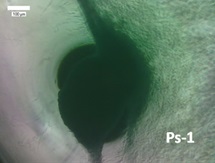 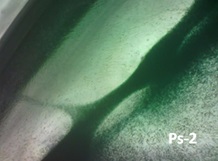 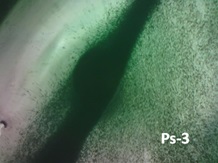 DISCUSSIONS: Positive surface markers CD90, CD73, and CD105 are the most phenotype markers that are often used for hADSCs characterization.2 - 4 CD90 or Thy-1 is a 25-30 kDa glycosyl-phosphatidyl-inositol (GPI)-linked membran glycoprotein that has been indicated to have a role in cell-cell and cell-matrix interactions as well as cell motility in various kind of cells including MSCs, 9 neural stem cells, 10 and is present in neural crest derived MSCs. 11 CD90 has been considered as a marker that is implicated in the hMSC inhibitory ability on limphoproliferative response to phytohemagglutinin (PHA). 12 Moreover, CD90 is also found on LX2 cells that is similar to MSC as they are capable of adipogenic differentiation. 13 CD105 or endoglin has been found in MSCs and endothelial progenitor cells, and is involved in various biological processes including angiogenesis and neovascularization. 14-17

CD105 has also been suggested in osteogenesis enhancement due to a reduction in TGF-β1/smad2 signaling. 18 CD73 has a regulatory function in controlling adipocyte, chondrogenic and osteogenic differentiation of MSCs.18, 19 Moreover, CD 105 was regulated by cytokines, growth factors, as well as culture conditions e.g. hypoxia.18 CD73 has an important role on mesenchymal stromal cell differentiation through adenosine receptor signaling. 18

Although CD73 is known to be down-regulated during osteogenic, adipocyte, and chondrogenic differentiation, 18 until recently, there are no information whether CD73 acts as a transient or definite marker.  Although CD90, CD105, and CD73 are not tissue specific markers and the expression are slightly reduced during differentiation, 18, 19 the combination is often used as defining criteria for MSCs. 2 - 4

In our study, hADSCs underwent spontaneous chondrogenic differentiation for Ps-1, Ps-2, and Ps-3 (Figure 2). CD73 should be strongly expressed on early hADSCs culture (chondrogenic progenitor cell) and slightly declined during differentiation.  18 CD73 is also regulated by cytokines and growth factors such as TGF-β. In our experiment, we used outdated human platelet lysate (outdated hPL) as FBS substitutes in culture medium, and outdated hPL was shown to be rich in growth factors. Outdated hPL showed highest concentration of TGF-β1 compared to other growth factors, 20 and TGF-β1 level was not influences by freeze-thaw cycles.21 This fact might influence the expression of CD73 on Ps-3, which had low expression (below 80%). However, according to Mendicino et al., 3 from 16 studies, MSCs express CD73 at a minimum range of 88%. Moreover, Delorme et al. 13 stated that CD73 might be decreased on MSCs, but should not dropped severely or not expressed at all. We also found that spontaneous chondrogenic differentiation of hADSCs in culture (Ps-3) still expressed CD73 over 80% in calibrated and well maintained flow cytometer instrument (data not shown).

The BD Calibrite beads 3-color kit contains unlabeled beads, FITC-labeled, PE-labeled, and PerCP-labeled beads, 22 which are frequently used. However, APC-labeled beads, which are available separately, are rarely used. According to Adan and collegues, 23 there are three basic procedures that affect the reliability and reproducibility of data. The first procedure includes examination of efficiency and performance of the laser tube, optical filters, log and linear amplifiers, and photomultipliers (PMT), which should be done once every 6 months. Daily calibration of the optical alignment is also included. Second procedure is frequent monitoring of instrument performance to identify both immediate and potential problems. Third procedure is calibrating the flow cytometer using a series of microbeads with at least four different predefined fluorescence (FL) intensities, plus non-fluorescent beads.

The third procedure can be performed at large intervals. Daily calibration practice is not a must, but the instrument must be quality controlled daily following calibration. 24 Moreover, over time calibration of FL channel must be performed since FL intensity is used to distinguish “positive” and “negative” cells in immunopheno-typing assays to assure the stability and reproducibility of FL intensities. 7 Moreover, if the instrument is changed or serviced, it is advisable to recalibrate. 24, 25

CONCLUSION: Routine calibration of FL1, FL2, FL3, and FL4, or the use of labeled beads in 4-colors plus non-fluorescent beads is important to get a reliable result in flow cytometry analysis.

ACKNOWLEDGEMENT: This study was funded by post graduate research grant 2015, contract no: 1111/SK/R/UI/2015 for conducting the research, and a grant from Directorate of Research and Community Service (DRPM), Universitas Indonesia, contract no: 0812SK/R/UI/2016 to defray language editing cost.