IMPORTANCE OF FLUOROQUINOLONES IN HUMAN HEALTHCARE: A COMPREHENSIVE REVIEW

IMPORTANCE OF FLUOROQUINOLONES IN HUMAN HEALTHCARE: A COMPREHENSIVE REVIEW

ABSTRACT:Fluoroquinoloes are a very important group of antibacterial agents that are widely prescribed for the treatment of infectious diseases in humans. These agents have excellent bioavailability and good tissue penetration with antimicrobial   activity against pathogens especially resistance to other class of antimicrobial drugs. This article gives a comprehensive review on different aspects of fluoroquinolones such as discovery, structural modifications, pharmacokinetic properties, antibacterial activity, present status of important drugs in which pharmacists and medical microbiologists should be interested.

INTRODUCTION: Fluoroquinolones gained wide spread use as antibacterial drugs for the human healthcare after the development of norfloxacin and ciprofloxacin in 1980’s. Thereafter more fluoroquinolones have been developed 1 - 2. The usefulness of newer fluroquinolones has been greatly expanded due to their improved properties as compared to older members. Simultaneously fluoroquinolones resistance strains have also developed as a consequence of their heavy uses 3.

In view of this, the present article gives a comprehensive review on different aspects of fluoroquinolones especially present status of their clinical uses and development of resistance against bacteria.

The first quinolone discovered was nalidixic acid in 1962 as a byproduct of antimalarial research.  Further structure modifications to the quinolone nucleus have resulted in the production of number of fluoroquinolones 1- 2, 4.  The selected important fluoroquinolones for human uses are present in Table 1 4 - 6.

These structural modifications Figure 1 have altered mainly to improve the pharmacokinetic and antimicrobial activity of the fluoroqunolones Table 2 5, 7- 8. 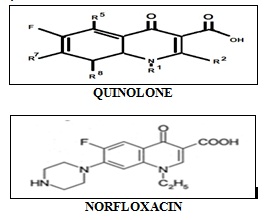 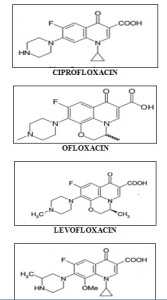 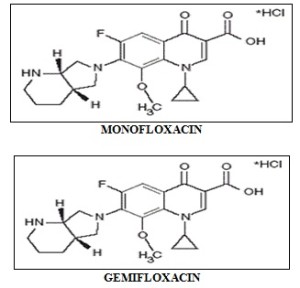 FIGURE 1: CHEMICAL STRUCTURE OF CLINICALLY IMPORTANT FLUOROQUINOLONES AVAILABLE IN MARKET FOR HUMAN USE

Fluoroquinolones have favorable pharmacokinetic properties that have encouraged their widespread clinical usages Table 3 6, 9-10. They are well absorbed and have good tissue penetration but absorption is inhibited by coadministration with antacids containing divalent metals such as magnesium, calcium and iron which they form insoluble chelates. Most fluoroquinolones are eliminated via the kidney. Moxifloxacin which is eliminated via the hepatic route is lacking antimicrobial activity against genitourinary infections.

The currently marketed fluroquinolones have safety profiles similar to that of other antimicrobial classes. Some of the serious effects occur with fluroquinolones includes CNS and tendon toxicity 11.

Second generation fluoroquinolones such as ciprofloxacin, ofloxacin and levofloxacin have expanded gram negative activity but limited gram positive activity. Norfloxacin is primarily used to treat gastrointestinal or genitourinary infections 12. It is good for bacterial diarrhea because high concentrations are present in the gut and anaerobic flora is not disturbed 9. Ciprofloxacin is the one of the most potent fluoroquinolone active against a broad range of bacteria and used worldwide. It is used for the treatment of urinary tract infections, respiratory tract infections, skin, bone, joint and gastrointestinal infections caused by gram negative and gram positive bacteria 13. Ofloxacin has intermediate antibacterial activity between ciprofloxacin and norfloxacin against gram negative bacteria but more potent than ciprofloxacin for gram positive organisms 9.

It is generally used for respiratory tract infections and urinary tract infections 14. Ofloxacin is available worldwide. Levofloxacin [levoisomer of ofloxacin] having improved activity against Strep. pneumoniae and some other gram positive and gram negative bacteria 9. The antibacterial spectrum of enoxacin, lomefloxacin and pefloxacin is similar to that of norfloxacin and use of these fluoroqunolones is now limited due to availability of newer highly active fluoroqunolones 18.

Sparfloxacin was withdrawn from USA market due to severe photosensitivity but remains available in Japan, India and some parts of Europe. Gatifloxacin has good activity against many gram positive and negative respiratory pathogens, atypical organism and some anaerobes 19. However, gatifloxacin is associated with the risk of hypoglycemia and hyperglycemia 20. Grepafloxacin and temafloxacin had a broad range of activity against gram positive as well as gram negative pathogens with some advantages but due to a high rate of reported adverse reactions including several death these were discontinued 21.

Tosufloxacin is used for the treatment of respiratory and gastrointestinal tract infections as well as genitourinary, hepatobiliary and orthopedic infections 22. It has a controversial safety profile and associated with severe thrombocytopenia and nephritis, and hepatotoxicity 23. It is available in Japan and some Asian countries.

However it was withdrawn from the market due to the risk of hepatotoxicity 24. Moxifloxacin has a broad spectrum activity and is used for the treatment of respiratory, skin and gastrointestinal infections 25, 26, 27.  Other clinical conditions in which moxifloxacin may be considered for use includes diabetic foot infections, intra-abdominal sepsis, pelvic inflammatory diseases and TB 28.

Newer fluoroquinolones such as delafloxacin 32, zalbofloxacin 33 and finafloxacin 34 are undergoing different phases of clinical trials. Delafloxacin has an anionic character which results in a 10 fold increase in delafloxacin accumulation in both bacteria and cells at acidic pH. This property is believed to confer to delafloxacin an advantage for the eradication of Straphylococcus aureus in acidic environments including intracellular infections 32.

It is under phase III clinical trials for the study of acute bacterial skin infections 35. Zabofloxacin is undergoing phase II clinical trials for the treatment of community acquired pneumonia. Finafloxacin is with the unique property of increasing antibacterial activity at pH values lower than neutral. It is undergoing safety profile studies in human.

With increasing utilization of fluoroquinolones in human health, emerging resistance for these agents has also increased. Various studies indicated that bacterial resistance to the fluoroqunolones is an emerging problem especially in Asia, America and other countries. 3 - 4. Major resistance is developed due to three reasons 41. The first involves mutation of any one or both the enzymes, DNA gyrase and topoisomerase IV. The second reason involves the differential expression of efflux mechanism and third is due to the presence of a plasmid generally found in gram negative organisms that can be horizontally transferred.

As fluoroquinolone resistance increase worldwide, enormous challenge will be placed on physicians and industry.  Efforts to promote their judicious clinical use are therefore essential.

Research efforts are required for further modifications in the quinolone nucleus that may produce newer compounds which may have greater potency, better penetration into the CNS and cerebrospinal fluid, better patient tolerability with lower incidence of adverse reactions and serious toxicity. Further resistance can be overcome by synthesizing drugs that act equally on both the enzymes [DNA gyrase and topoisomerase IV]. This would require a concomitant mutation in both the enzymes to confer high level of resistance and this has less probability to occur than sequential mutations. Newer fluoroquinolone derivatives developed with the consideration of factors like hydrophobicity and structural features could avoid being pumped out by the efflux mechanisms.

CONCLUSION: From all the information collected from various sources, it is observed that the fluoroquinolones have many favorable properties including broad spectrum activity. As a result they are widely used clinically and their uses as constantly growing. Misuse of these drugs has resulted in one of the problem of bacterial resistance that we face today. it is advised to use these drugs judiciously for specific condition.

In Australia 42 the use of fluroqiunolones in human and animals has been restricted through its national pharmaceutical subsidy scheme and through regulation. As a consequence resistance to fluoroquinolones in the country has been slow in emergence and has remained at low levels in key pathogens therefore appropriate use of fluoroquinolones will preserve its choice as an antibacterial drug for longer clinical uses.