Paracetamol is an important anti-inflammatory and analgesic drug widely used in biological disorders. One of major problems with this drugs is its low solubility thus dissolution rate in biological fluid, which results into poor bioavailability after oral administration. In this study polyvinyl pyrrolidone (PVP) is used to enhance bioavailability of paracetamol. Paracetamol and PVP are used in 1:1 and 1:2 ratios to study the effect of PVP in dissolution profile of drug. Dissolution study showed a linear increase in paracetamol release with increase in polymer concentration. Two different batches of granules are also evaluated for their micromeritics properties and flow behavior. The micromeritics properties and dissolution profile showed a evident that PVP can be used to improve dissolution behavior of paracetamol.

INTRODUCTION: Oral bioavailability of a drug depends on its solubility and/or dissolution rate, therefore efforts to increase dissolution of drugs with limited water solubility is often needed 1. Improvement in the dissolution rate of the poorly soluble drugs after oral administration is one of the most crucial challenges in modern pharmaceutics. Many methods are available to improve these characteristics including salt formation, micronization and addition of solvent or surface-active agents. Solid dispersion is one of these methods, which was most widely and successfully applied to improve the solubility, dissolution rates and consequently the bioavailability of poorly soluble drugs.

Materials: Paracetamol was a generous gift from Ipca Laboratories, Mumbai. Polyvinyl pyrrolidone I.P grade were purchased from SD Fine Chemicals Ltd, Mumbai. All reagents were of analytical grade and supplied without need to purification. Double distilled water was used during the experiments.

Preparation of PVP-Paracetamol Solid Dispersion: A mixture of PVP and paracetamol (1:1 & 1:2) was wetted with water and kneaded thoroughly for 30 minutes in a glass mortar. The paste formed was dried under vacuum for 24 hours. Dried powder was passed through Sieve no. 60 and stored in a desecrator until further studied.

Percent Practical Yield (PY): Percentage practical yield was calculated to know about percent yield or efficiency of any method, thus its help in selection of appropriate method of production. SDs were collected and weighed to determine practical yield (PY) from the following equation.

Drug Content: SDs equivalent to 10 mg of aceclofenac were weighed accurately and dissolved in the 10 ml of methanol. The solution was filtered, diluted suitably and drug content was analyzed at 275 nm by UV spectrophotometer 12. The actual drug content was calculated using the following equation as follows:

Micromeritic Study: Bulk density: Apparent bulk density (g/ml) was determined by placing pre-sieved bulk powder blend into a graduated cylinder via a large cylinder and measuring the volume and weight of powder blend 12, 13, 14;

Tapped Density: It was determined by placing a graduated cylinder, containing a known mass of powder on mechanical tapping apparatus, which was operated for fixed number of taps (around 50). Using the weight of powder in a cylinder and its tapped volume, the tapped density was computed 12, 13, 14;

Carr’s Index:  It is an important parameter to study compressibility behaviour of composites. Carr’s index was calculated, from the results of bulk density and tapped density 12, 13, 14;

In vitro Drug Release Studies: The release profile of an entrapped drug predicts how a delivery system might function and gives valuable insight into its in vivo behavior. In vitro release profiles for each SD as well as pure drug were performed using USP dissolution apparatus (Electro lab, Mumbai, India). Sample equivalent to 100 mg of paracetamol was added to 900 ml phosphate buffer of pH 7.4 at 37±0.5 oC and stirred at 100 rpm. Aliquot of 1 ml was withdrawn at time intervals of 5, 10, 15, 20, 30, 45 and 60 min. The withdrawn volume was replaced with the same volume of dissolution medium in order to keep the total volume constant. The absorbance of the samples was measured at 249 nm after suitable dilution if necessary, using appropriate blank.

RESULTS AND DISCUSSION: Solid dispersion of paracetamol was prepared using polyvinyl pyrrolidone and evaluated for various physical parameters. Percentage yield of the Paracetamol solid dispersion of ratio 1:1 and 1:2 was found to be 90% and 97.58% respectively. This illustrates the fact that, batch B releases more drug in comparison to batch A during same interval of time. The granules were also evaluated for drug content for both the batches. Drug content in the ratio of 1:1 & 1:2 was found to be 87% and 93.40% respectively which were fairly within the limits.

Prior to drug release and drug content studies, granules of each batch were characterized for physical parameters which involved bulk density, tapped density, consolidation index, Hausner’s ratio and angle of repose. Result studies of these parameters are shown in table 1. Findings of study reveals the fact that granules of batch B have better flow behavior in comparison to that of batch A. Good is the range of bulk density and tapped density, better is the ease of compaction in dosage form. This factor is thus of at most importance while studying the physical parameters. It can be also concluded on the basis of bulkiness data that, granules of batch B are lighter and hence provide a greater range of concentration to be incorporated in formulations. The values of all these parameters are illustrated in table 1.

The dissolution behavior of both batches showed that batch B has better release characteristics as compared to batch A. In both the cases faster dissolution as compared to conventional dosage form is attributed to the fact that PVP forms molecular dispersions with drug molecules. The release data is shown in following figure 1. Thus the experiment showed that PVP can be used to improve the dissolution characteristics of poorly soluble drug in pharmaceutical formulations. 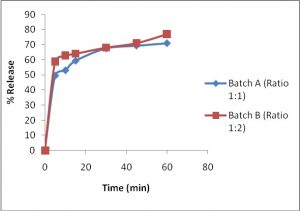 CONCLUSION: From the present study it can be easily demonstrated that, polyvinylpyrollidine has immense potential to improve solubility characters of any less soluble or poorly soluble drug. This work also illustrates the fact that PVP has characteristics to form molecular dispersions with the drug molecules, thereby, increasing the dissolulution rate of drug and decreasing the time of release of drug from the formulated mixture or granules.