INTRODUCTION: Alprazolam, a triazolobenzo- diazepine with poor aqueous solubility and 70-80% bio-availability orally and 80% protein–binding, is used to treat panic and anxiety disorder 1, 2. It is a potent drug available in tablet form with a dose of 0.25, 0.5, 1 or 2 mg/day 3, 4. Dissolution is the rate limiting step for this poorly water soluble drug. For  better absorption and quick onset of action, dissolution rate enhancement is required. Theincreased dissolution rates from solid dispersions are attributed to the reduction of particle size of the drug within the dispersions and increased wettability 5. The particle size reduction to the minimum level, i.e., the molecular state is desirable since when the carrier dissolves the drug must go into solution. Molecular dispersions are obtained in glass and solid solutions and probably are amorphous dispersions.

Analytical Method: Estimations of Alprazolam at pH 6.8 were done at absorption maxima at 222nm using UV spectrophotometer (SHIMADZU) in the concentration range 0.2 to1.0 ppm with the help of standard curve.

Evaluation and Characterization of the prepared  Solid dispersion:

Solubility Studies: Solubility studies of both pure Alprazolam, prepared solid dispersions and physical mixtures were carried out. Powder samples of solid dispersions equivalent to 10mg of pure Alprazolam were taken and added to 50 ml of distilled water. The solutions were shaken and kept aside for 24 hrs with continuous stirring. After 24 hrs, the sample solutions were filtered through Whatmann filter no. 1 and from the filtrate 1 ml of solution was taken and diluted to a suitable concentration with Phosphate buffer pH-6.8. The absorbance of the prepared dilutions were measured at 222nm using UV-Visible spectrophotometer. The results are shown in table 2. 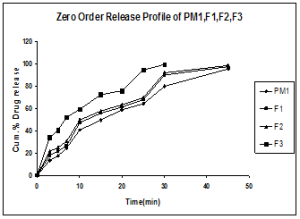 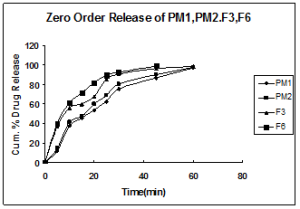 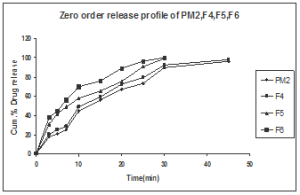 It indicates that the PVPK30 showing highest improvement in solubility and dissolution rate as compared to the PEG-6000 . PVP K30 is the good carrier among the two carriers selected for Solvent evaporation method.

Preparation and Characterization of the tablets of  Solid Dispersions and Physical Mixtures:

Preparation of the tablets: Direct compression method was preferred because of simplicity, rapidity, economic reasons and stability concerns. Tablets were prepared by mixing required amounts of solid dispersions or their physical mixtures with excipients  and compressing directly. Composition of the tablets are given in table 3. Formulation F3 & F6 were selected for preparing tablets.

Tablets of F6 showed highest dissolution rate than all other formulations, followed by those of F3.

Drug Release Mechanism 10:The experimental data were fitted to different kinetic models like Zero order, First order, Higuchi Model and Korsmeyer model to ascertain the mechanisms for drug release from different formulations. The correlation coefficient of the slope of these formulations showed an adequate fit to Korsmeyers kinetics. From calculation of “n” values obtained for different formulations after fitting into Korsmeyer and Peppas equation were within 0.5-0.75, which indicates diffusion of drug from the formulations are following anomalous transport.

Drug-Polymer Interactions Study: FTIR spectra were taken in the Perkin Elmer (spectrum RX -1) by scanning the sample in potassium bromide (KBr) discs. Before taking the spectrum of the sample, a blank spectrum of air back ground was taken. The sample of pure drug, pure polymers and the solid dispersions containing both the drug and polymer were scanned and plotted with the help of Bruker software. No interaction between the drug and polymers were found as evident from analysis of characteristics peaks.

Stability Study: Solid dispersions F3, F6 were put on short term stability study at 300C and 400C/75 RH for a period of three months, there were no significant changes in drug content and dissolution profile at 300C but significant changes were observed at 400C. Hence, solid dispersions need storage in a dry place at a temperature not exceeding 300C.

CONCLUSION: PVP-K30 was most effective to enhance the dissolution rate of the drug. Drug release mostly followed anomalous transport. There was no interaction between drug and excipients.  Solid dispersions were stable at 300C in dry atmosphere.