Cordyceps militaris is an important medicinal mushroom useful for the extraction of several bio-metabolites for natural drugs to revitalize the various physiological systems of the body from the ancient era. The constituents of C. militaris are now using widely in the modern pharmaceutical industries. The active principles of C. militaris are beneficial to act principally as pro-sexual, anti-cancer, immunomodulatory, and anti-oxidant agent, let alone its others beneficial activities for most of the systems of the body. In addition, it has lots of clinical applications. The prospects of this novel mushroom could be used not only for modern medicinal manufacturers, but also for the community people for the betterment of their health. The present review highlights the importance of this medicinal mushroom C. militaris, also aiming to draw necessary attention of the researchers as a frontier one.

INTRODUCTION: Medicinal mushroom is a field involving the study of their biology, chemistry as well as their practical applications in the field of pharmacology, in order to prepare novel drugs by biotechnological means. This field is becoming more important day by day, and has been widely investigated due to its practical benefits. Synthetic drugs are available in the commercial market and are being used in daily life, but they are not safe enough as they leave some side effects and sometimes harmful for human health. On the other hand, there is still a lack in research on the chemistry and bio-constituents of the medicinal mushrooms those may provide more efficacious and safer drugs having no side effects.

The medicinal mushroom (Cordyceps species) is a valuable source of useful natural products having diverse biological activities 1. Cordyceps militaris (an entomopathogenic fungus), is one of the most important medicinal mushrooms, belonging to the class Ascomycetes, has been used popularly as a crude drug and a folk tonic food in East Asia 2. It possesses many kinds of active components (such as cordycepin, polysaccharides, ergosterol, and mannitol), and due to its several physiological activities, it is currently using for multiple medicinal purposes 3, 4, 5. There are over 2, 500 mushroom varieties are grown in the world today6. It is estimated that more than 10 million metric tones of edible and medicinal mushrooms were produced last year in various countries 7. Therefore, mushroom family has received significant attention from medical and pharmacological researchers as ample source of biologically active compounds 8. The use of herbal supplements in the Europe including United States is continuously growing and raises concerns about safety, efficacy, and how they affect safe patient care in most of the cases 9. On this standpoint, the use of natural products including medicinal mushrooms is increasing day by day and the growth of the medicinal mushroom product industry have led to increase concern regarding their safety scale 10.

As the emerging diseases are increasing in number, the modern medicines get tired to fight against and also it is really a time consuming matter to develop a suitable new drug for. On the other hand, as the medicinal mushrooms Cordyceps militaris possesses several biological and clinical applications; additionally, it offers preventive cares that could a great help for the human being by strengthening their body defense system by acting passively.

The Cordyceps militaris was once used only as a traditional tonic but times have changed: The ancient medicinal fungus C. militaris, which has been used as a crude drug for the welfare of mankind in old civilization, is now of a matter of concern due to its unexplored potentials. WHO estimated that about three-quarters of the world’s population currently use natural drugs and other forms of traditional medicines like medicinal mushrooms to treat their diseases11 including breast cancer (12%) 12, liver disease (21%) 13, HIV (22%) 14, asthma (24%) 15 and rheumatological disorders (26%) 16. The acceptance and recognition of natural medicine has been in part due to the acknowledgement of the value of traditional and indigenous pharmacopoeias, the incorporation of some medicines derived from these sources into pharmaceuticals 17, 18, the need to make health care affordable for the community people and the perception that pharmaceutical drugs are increasingly over prescribed, expensive and even dangerous. Another important perception fomenting this interest is that natural remedies are somehow safer and more efficacious with least side effects than remedies that are pharmaceutically derived 19, 20. 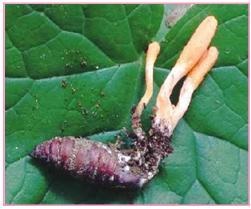 Biological activities of Cordyceps militaris: The main active constituent of C. militaris fruiting bodies (Fig. 1) is cordycepin, which was first extracted from C. militaris and then found to be present in Cordyceps sinensis 22 and Cordyceps kyushuensis23. The cordycepin (3′-deoxyadenosine, C10H13N5O3, m. pt. 225 °C, ［α］D-47 °C) (Fig. 2), a nucleoside analogue 22, 24, is considered as a nucleic acid antibiotic that might inhibit canceration of cells and thus contribute to the normalization of cancer cells as one of constituents of gene DNA 22. 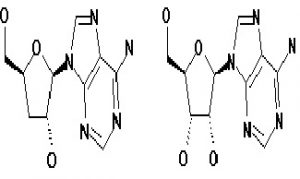 FIG. 2 CHEMICAL STRUCTURES OF (A) CORDYCEPIN AND (B) ADENOSINE

In addition, it has been reported that the cordycepin is intracellularly converted into its 5′-mono-, di- and triposphates that inhibit the activity of several enzymes (Fig. 3) in the purine biosynthetic pathway 25.

FIG. 3: MECHANISM OF ACTION OF CORDYCEPIN (INHIBITION OF PURINE AND POLYNUCLEOTIDE BIOSYNTHESIS BY CORDYCEPIN)

As Cordycpes militaris has an effective immunomodulatory activity, it can be used for the prevention of several diseases. Therefore, the medicinal mushroom C. militaris is one of the most important candidates that may be used as the medicinal base in the future.

Frontier prospects: Nature is the source of all the raw materials that we need. About 2-3 decades ago, most of the drugs were of natural origin. A variety of reasons remain behind why people like to use natural medicines as it is evident that patients are getting even more distressed after using the chemically synthesized drugs, rather than natural means like medicinal mushrooms that can conquer life-claiming diseases, leaving no side effects on human health. To maintain proper growth, the pharmaceutical industries need innovation and access to high output rate on low-cost materials with reasonable safety. The combination of modern chemistry with bio-based starting materials, like bio-metabolites, offers the scope for revolutionizing mushroom based pharmaceutical industries. In the near future, bio-metabolites (cordycepin, polysaccharides etc.) extracted from medicinal mushroom C. militaris will have a role that compares with that of oil and gas crackers today.

CONCLUSION: The ancient medicinal mushroom C. militaris, which has been used as a tonic drug in the old civilization, is now of a prospective harbor to explore many mysterious potentials. The novel components obtained from C. militaris already have more than 21 clinically approved beneficial effects for human health 3. Especially, the anti-cancer agent cordycepin from C. militaris is expected to play evolutionary roles in the pharmacognosy sector, leading to create a viable base for pharmaceutical industries as some emerging diseases like CANCER, SARS, AIDS, SWINE FLU have no proper remedies yet. In this context, this novel medicinal mushroom Cordyceps militaris needs further elaborative study, pharmacological investigations, clinical trials and public awareness.