ABSTRACT: Rice is much revered oriental food and the most important tropical cereal crop. It is the staple food of about half the human race and is often the main source of calories and the principal food of many millions of people. Health benefits of rice include providing fast and instant energy, stabilizing blood sugar levels and providing essential source of vitamin B1 to human body. In this study, a bioinformatics and molecular modeling approach was adopted to explore properties and structure of rice antioxidant proteins. The antioxidant proteins selected for this study are CYS PRX (P0C5C9, Q6ER94, P0C5D1) and PRDX (Q9FR35, Q7F8S5, Q9SDD6). Physico-chemical characterization interprets properties such as pI, EC, AI, GRAVY and instability index and provides data about these proteins and their properties. Prediction of motifs, patterns, disulphide bridges and secondary structure were performed for functional characterization. Three-dimensional structures for these proteins were not available as yet at PDB. Therefore, homology models for these antioxidant proteins were developed. The modeling of the three dimensional structure of these proteins shows that models generated by Modeller9.11 were more acceptable in comparison to that by Swiss Model. The models were validated using protein structure checking tools PROCHECK and WHAT IF. These structures will provide a good foundation for functional analysis of experimentally derived crystal structures.

INTRODUCTION:Rice is much revered oriental food and the most important tropical cereal crop. It is the staple food of about half the human race and is often the main source of calories and the principal food of many millions of people 1. Health benefits of rice include providing fast and instant energy, stabilizing blood sugar levels and providing essential source of vitamin B1 to human body.

Rice varieties such as Bora is given to the patient suffering from jaundice, 2-3 times daily for a week, Dhanwar is given to pregnant cow for safe pregnancy, healthy calf and easily removal of placenta, Karhani is useful in breathing problems and epilepsy and Gudna is useful for chronic gastric patient 3.

The protein content of the rice is lower than that of wheat, but is of superior quality and utilized better by the body than the wheat protein 4. The ancient and modern oriental healers through traditional medicines have always advocated the use of natural brown rice as a key to youthful health building 5. Rice is about 98 per cent digestible. Rice starch is different from other grain starches as it contains 100 percent amylopectin, which is most completely and rapidly digested grain starch; this makes rice in ideal health food.

Rice protein, which comprises up to 8% of the grain, has a special benefit as it has eight of the essential amino acids in a delicately balanced proportion. Laboratory studies have shown that rice products may have anti-cancer properties and the potential to treat other conditions such as diabetes, kidney stones, Alzheimer’s disease and heart disease 6, 7.

The oil from rice bran is unique among edible oil due to its rich source of commercially and nutritionally important phytoceuticals 8. The oil from rice bran contains vitamin E and minerals. The vitamin E groups of compounds in rice have antioxidant properties and these compounds could explain some of the traditional medicinal uses of rice, particularly to treat cancer 9. Antioxidants can protect against the damage induced by free radicals acting at various levels 10.

Brown rice and whole grains are said to be rich in insoluble fibre. The insoluble fibre from rice acts like a soft sponge that may be pushed through intestinal tract quickly and easily 11. Both white rice and brown rice contain 5.2 grams of protein per every 150 grams. Rice protein is also gluten free so it’s a good source of protein for those with gluten intolerance or Celiac’s disease 12. Its antioxidant activity has made rice unique among cereals.

An antioxidant is a molecule capable of inhibiting the oxidation of other molecules. Oxidation is a chemical reaction that transfers electrons or hydrogen from a substance to anti-oxidizing agent. Antioxidants are widely used in dietary supplements. They have been investigated for the prevention of diseases such as cancer, coronary heart disease and even altitude sickness 13.

Antioxidants also have many industrial uses, such as preservatives in food and cosmetics and to prevent the degradation of rubber and gasoline 14. Rice contains some natural antioxidant proteins.

In this study, the antioxidant proteins of rice (Oryza sativa subsp. Japonica) have been selected for which three-dimensional structures were not available at the protein data bank (PDB). These proteins contain enzyme like peroxi-redoxins. Peroxiredoxins 15 are peroxidases that catalyze the reduction of hydrogen peroxide, organic hydroperoxides, as well as peroxynitrite. It has an essential role in tumour suppression and in cell signaling 16.

The sequences of antioxidant proteins are retrieving from Swiss-Prot. Different computational tools and softwares are used for making predictions regarding the identification and structure prediction of proteins. In this paper, the insilico analysis and homology modeling studies on antioxidant proteins of rice was reported. Three-dimensional structures for these proteins were yet not available.

Materials and Methods: Sequences of antioxidant proteins of rice were retrieved from the SWISSPROT, a public domain protein database 17.  It is a high quality annotated and non-redundant protein sequence database, which brings together experimental results, computed features and scientific conclusions. Table 1 shows the protein sequences considered in this study. The antioxidant proteins sequences were retrieved in FASTA format and used for further analysis.

Disulphide bonds are important in determining the functional linkages. Table 4 shows prediction of “SS” bonds using the primary structure (Protein sequence data) by the tool CYS_REC. It is used to determine the cystein residues and disulphide bonds. It identifies the position of cysteins present and pattern (if present) of pairs in the protein sequence.

Secondary structure prediction: SOPMA (Self Optimized Prediction Method with Alignment) 25 was used for calculating the secondary structural features of the antioxidant protein sequences considered for this study. The results were presented in Table 6.

Model Building and evaluation: The modeling of the three dimensional structure of the proteins was performed by homology modeling programs, Swiss model 26 and Modeller 9.11 27. The constructed 3D models were energy minimized in GROMACS force field using steepest descent minimization Algorithms 28. The overall stereochemical property of the protein was assessed by Ramchandran plot analysis 29. The validation for structure models obtained from the software tools was performed by using PROCHECK 30. The models were further checked with WHAT IF 31.The results of PROCHECK and WHAT IF analysis was shown in Table 7 and Table 8 respectively. The structures of modeled proteins were visualized by Rasmol.

Paraeters computed using Expasy’s ProtParam tool was represented in Table 2. Isoelectric point (pI) is the pH at which the surface of protein is covered with charge but net charge of protein is zero. At pI proteins are stable and compact. The computed pI value of all proteins except Q9SDD6 were less than 7 (pI<7) indicates that these antioxidant proteins were considered as acidic. The pI value of Q9SDD6 is greater than 7 (pI > 7) reveals that this protein is basic in character. The computed isoelectric point (pI) will be useful for developing buffer system for purification by isoelectric focusing method.

The Grand Average hydropathy (GRAVY) value for a peptide or protein is calculated as the sum of hydropathy values of all the amino acids, divided by the number of residues in the sequence. GRAVY indices of rice proteins are ranging from -0.35 to 0.231. This low range of value indicates the possibility of better interaction with water.

Functional analysis of these proteins includes prediction of transmembrane region, disulphide bond and identification of important motifs. SOSUI signal server distinguishes between membrane and soluble proteins from amino acid sequences. The Transmembrane regions and their length were tabulated in Table 3.

The server SOSUI signal classifies CYS PRX (Q6ER94) and PRDX (Q7F8S5 and Q9SDD6) as membrane protein and other rice antioxidant proteins as soluble proteins. The transmembrane regions are rich in hydrophobic amino acids.

As disulphide bridges play an important role in determining the thermostability of these proteins. CYS_REC was used to determine the Cysteine residues and disulphide bonds. Possible pairing and pattern with probability were presented in Table 4.  Result shows that Q6ER94 protein contains disulphide linkages.

The functions of antioxidant proteins of rice were analyzed by submitting the amino acid sequence to Prosite server 32. Prosite analysis suggested the functionality of these proteins with profiles and patterns identified for characteristic functionality were represented in Table 5.

The results revealed that random coils dominated among secondary structure elements followed by alpha helix, extended strand and beta turns for all sequences. The secondary structure were predicted by using default parameters (Window width: 17, similarity threshold: 8 and number of states: 4).

TABLE 5: FUNCTIONAL CHARACTERIZATION OF PROTEINS OF RICE AT PROSITE

The constructed three dimensional models were energy minimized in GROMACS force field using steepest descent minimization Algorithms. The psi and phi distribution of the Ramachandran Map generated by of non-glycine, non proline residues were summarized in Table 7. The final modeled structures were visualized by Rasmol that was shown in Figure 1.

TABLE 7: RAMACHANDRAN PLOT CALCULATION AND COMPARATIVE ANALYSIS OF THE MODELS FROM SWISS-MODEL AND MODELLER 9.11 COMPUTED WITH THE PROCHECK PROGRAM 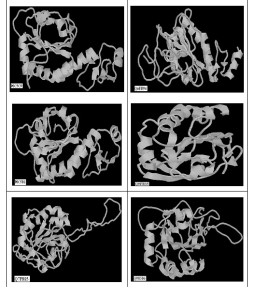 The stereo chemical quality of the predicted models and accuracy of the protein model was evaluated after the refinement process using Ramachandran Map calculations computed with the PROCHECK program.

The assessment of the predicted models generated   by Modeller 9.11 was shown in Figure 2. In the Ramachandran plot analysis, the residues were classified according to its regions in the quadrangle. 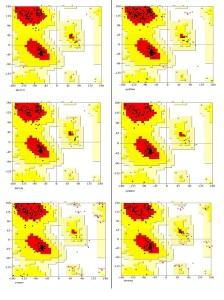 The red  regions  in the  graph  indicate  the  most  allowed  regions whereas  the  yellow  regions  represent   allowed  regions.  Glycine is represented by triangles and other residues are represented by squares.  The result revealed that the modeled structure for P0C5C9, Q6ER94, P0C5D1, Q9FR35, Q7F8S5 and Q9SDD6 has 89.6%, 90.6%, 88.1%, 92.6%, 82.7% and 86.0% residue respectively in allowed region. Such figures assigned by Ramachandran plot represent a good quality of the predicted models.

The modeled structures of rice antioxidant proteins were also validated by other structure verification servers WHAT IF. Standard bond angles of the six models are determined using WHAT IF. The results were shown in Table 8. The analysis revealed RMS Z-scores were almost equal to 1 suggesting high model quality. The predicted structures conformed well to the stereochemistry indicating reasonably good quality.

TABLE 8: RMS Z-SCORE FOR BOND ANGLES OF MODELED PROTEIN STRUCTURE USING WHAT IF.

Secondary structure   analysis revealed  that  random  coils  dominated   among secondary  structure  elements  followed  by alpha  helix,  extended strand and beta turns for all sequences. The modeling of the three dimensional structure of the proteins were performed by automated homology programs, Swiss model and Modeller 9.11. The models were validated using protein structure checking tools PROCHECK and WHAT IF. These structures   will provide a good foundation for functional analysis of experimentally derived crystal structures.

ACKNOWLEDGEMENT: The authors are thankful to the authorities of Department of Computer Science, Veer Narmad South Gujarat University, Surat, Gujarat, India for providing support to the study and other necessary infrastructure to write a research article.