The completion of genome sequences of pathogenic bacteria and the completion of human genome project has provided lot amount of data that can be utilized to design vaccines and drug targets. Recently adopting strategies for drug designing is based on comparative genomics approach, it gives a set of genes that are likely to be essential to the pathogen but absent in the host. By performing homology searches and structural modeling we can determine which of these proteins can function as the most effective surface epitope. This provides novel targets for functional inhibitors will result in discovery of novel therapeutic compounds active against bacteria. In this study, we used proteins that are potential target for Clostridium botulinum, this include, MATE efflux family protein, ComEC/Rec2 family protein, formate/nitrite transporter family protein. Physico-chemical characterization interprets properties such as pI, EC, AI, GRAVY and instability index and provides data about these proteins and their properties. Prediction of patterns, disulfide bridges and secondary structure were performed for functional characterization. Three dimensional structures for these proteins were not available as yet at PDB. Therefore, homology models for these proteins were developed. The modeling of the three dimensional structure of these proteins were performed by swiss model & modeller. The models were validated using protein structure checking tools PROCHECK and WHAT IF. These structures will provide a good foundation for functional analysis of experimentally derived crystal structures and also for drug designing.

INTRODUCTION:Completion of human and pathogenic bacteria genome provided lot of raw material for in silico analysis 1. Essential genes are those important for the survival of an organism and therefore considered foundation of life. Identification of bacterial genes that are non-homologous to human genes and important for the survival of bacteria is one of the promising means to identify novel drug targets. Availability of genome sequence of pathogens has provided a tremendous amount of information that can be useful in drug target and vaccine target identification 2.The target should be essential for growth and viability of the organism, should provide selectivity, and yield a drug which is highly selective against pathogen with respect to human host. A subtractive genome approach and bioinformatics provide opportunities for finding the optimal drug targets 3. Proteins that cooperate towards a common biological function are located in sub cellular compartment.

Thus, identification of various subcellular proteins helps in development of drug candidate. By subjecting four non-structural membrane proteins (MATE efflux family protein, Com/Rec2 family protein, Formate/ Nitrite transport family protein, Hypothetical protein CLI_0953) to homology searches and structural modeling we can determine which of these proteins can function as most effective surface epitope. Screening against such novel targets results in designing of functional inhibitors 6, 7. This will result in discovery of novel therapeutic compounds active against bacteria including the increased number of antibiotic resistant clinical strains.

Computational tools provide researches to understand physicochemical and structural properties of proteins. A large number of computation tools are available from different sources for making prediction regarding the identification and structure prediction of proteins. The major drawbacks of experimental methods that have been used to characterize the proteins of various organisms are time consuming, costly and fact that this methods not amendable to high throughput techniques.

In-silico approaches provide a viable solution to these problems. The amino acids sequence provides most of the information required for determining and characterizing molecule’s function, physical and chemical properties.

Computationally based characterization of the features of proteins found or predicted in completely sequenced proteomes is an important task in search for knowledge of protein function. In this paper, the in silico analysis and homology modeling studies of target proteins were reported.

Secondary Structure Prediction: SOPMA was employed for calculating the secondary structural features of the proteins sequences considered for this study. The results were represented in Table 5.

Model building and evaluation: The modeling of three dimensional structures of the protein was performed by two homology modeling programs, Swissmodel and Modeller 15, 16. The constructed 3D models were energy minimized in CHIRON by short discrete molecular dynamics (DMD) simulation 17. The overall stereochemical property of the protein was assessed by Ramchandran plot analysis 18.

The validation for structure models obtained from the two software tools was performed by using PROCHECK 19. The models were further checked with WHAT IF 20. The results of PROCHECK and WHAT IF analysis was shown in Table 6 and 7 respectively. Structural analysis was performed and figures representations were generated with YASARA.

RESULT AND DISCUSSION: Table 1 shows target proteins considered in this study. These proteins sequence were retrieved from NCBI, a public domain database, in FASTA format and used for further analysis. Parameters computed using Expasy’s ProtParam tool was represented in Table 2. The calculated isoelectric point (pI) will be useful because at pI, solubility is least and mobility in an electrofoucsing system is zero. Isoelectric point (pI) is the pH at which surface of protein is covered with charge but net charge of protein is zero. At pI proteins are compact and stable.

The computated pI values of all proteins were greater than 7 indicate that these proteins were considered as basic. The computated isoelectric point will be useful for developing buffer system for purification by isoelectric focusing method. Although Expasy’s ProtParam computes the extinction coefficient (EC) for 276, 278, 279, 280 and 282 nm wavelengths, 280 nm is favored because proteins absorb light strongly there while other substances commonly in protein solutions do not. Extinction coefficient of proteins at 280nm is ranging from 25565 to 61715 M-1 cm-1 with respect to the concentration of Cys, Trp and Tyr. The high EC of RFP indicates presence of high concentration of Cys, Trp and Tyr.

The computed ECs help in the quantitative study of protein-protein and protein-ligand interactions in solution. The instability index provides an estimate of stability of protein in test tube. There are certain dipeptides, the occurrence of which is significantly different in the unstable proteins compared with those in the stable ones. This method assigns a weight value of instability. Using these weight values, it is possible to compute an instability index (II). A protein whose instability index is smaller than 40 is predicted as stable, a value above 40 predicts that the protein may be unstable. The instability index values for proteins were found to be ranging from 23.51 to 34.86. The result classified NTFP & MEFP were more stable than RFP and NTFP is more stable among all (Table 2).

The aliphatic index (AI) which is defined as the relative volume of a protein occupied by aliphatic site chains (A, V, I and L) is regarded as positive factor for the increase of thermal stability of globular proteins. AI for proteins sequences ranged from 120.86 to 136.45. The very high AI of all protein sequences indicates that these proteins may be stable for wide temperature range. The Grand Average hydropathy (GRAVY) value for a peptide or protein is calculated as the sum of hydropathy values of all amino acids, divided by the number of residues in the sequence. GRAVY indices of proteins ranging from 0.356 to 0.871. The lower range of value indicates the possibility of better interaction with water.

Three dimensional structures are predicted for proteins where such data is unavailable. There is lack of experimental structures for these proteins considered. Out of four protein sequences, three dimensional structure was not modeled for only HPC. The other three proteins for which the three dimensional structures were modeled includes MEFP, RFP, NTFP. The modeling of the three dimensional structure of the protein was performed by two homology modeling programs, Swiss Model and Modeller. The constructed three dimensional models were energy minimized using CHIRON by short discrete molecular dynamics (DMD) simulations. The phi and psi distribution of the Ramachandran Map generated by of non glycine, non proline residues were summarized in Table 6. A comparison of the results obtained from Swiss Model and Modeller, shows that the models generated by two different software tools for NTFP were almost same. Thus NTFP would be used in designing drug. The final modeled structures were visualized by YASARA that was shown in Figure 1. The stereo chemical quality of the predicted models and accuracy of the protein model was evaluated after the refinement process using Ramachandran Map calculations computed with the PROCHECK program.  The results of Ramachandran plot of all proteins were shown in Figure 2. In the Ramachandran plot analysis, the modeled structure for MEFP, RFP and NTFP has 65.0%, 60.0% and 83.4% residue respectively in most favored region. This shows that model for NTFP has good quality. The modeled structures of these proteins were also validated by other structure verification servers WHAT IF. The results were shown in Table 7.The analysis revealed RMS Z-score of the modeled protein NTFP is 0.840 which is near to 1.0.

TABLE 6: RAMACHANDRAN PLOT CALCULATION AND COMPARATIVE ANALYSIS OF THE MODELS FROM SWISS-MODEL AND MODELLER COMPUTED WITH THE PROCHECK PROGRAM

TABLE 7: RMS Z-SCORE FOR BOND ANGLES OF MODELED PROTEIN STRUCTURE USING WHAT IF 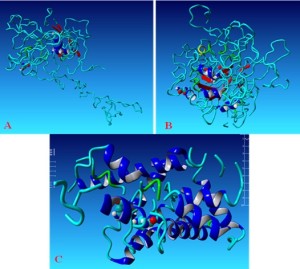 FIGURE 1: STRUCTURE OF PROTEINS MODELED BY MODELLER AND THE RIBBON STRUCTURE WAS VISUALIZED BY YASARA. FIG. A, B & C REPRESENTS PROTEINS MEFP, RFP & NTFP, RESPECTIVELY 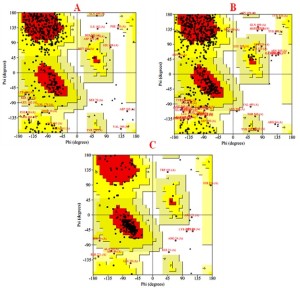 Functional analysis was performed by SOSUI server. Secondary structure analysis shows that alpha helix dominated among secondary structure. Among three proteins, NTFP shows up to 83.4% of residues are in most favored region which indicated good model. The structures were checked using PROCHECK and WHAT IF.

This shows that the modeled structure of NTFP will provide a good foundation for functional analysis of experimentally derived crystal structures and also for drug designing against Clostridium botulinum.

ACKNOWLEDGEMENT: The authors are thankful to the staff members of Departments and authorities of Veer Narmad South Gujarat University, for providing support to the study.