ABSTRACT: Tuberculosis is one of the major contagious diseases and a leading cause of death in humans. Current treatment methods suffer from a multitude of problems like long duration of treatment, lack of patient compliance, presence of drug-resistant bacteria, etc. To combat the disease effectively, there is an urgent need for the development of new drugs effective against both drug-sensitive and drug-resistant bacteria. Cynodon dactylon is known to be effective against cough and other lung diseases. The objective of the present study is to identify the component in Cynodon dactylon, which is therapeutically effective against Mycobacterium tuberculosis by in-silico docking analysis using Autodock. Here InhA, the enoyl acyl carrier protein reductase from Mycobacterium tuberculosis was taken as the target protein for docking analysis. Phytochemicals from Cynodon dactylon were selected based on molecular and ADME properties. Among the phytochemicals investigated, luteolin showed a good docking score and better interaction with the target protein and is comparable to the commercially available first-line antitubercular drug, isoniazid. Based on our preliminary analysis of molecular properties, ADME studies, and docking scores, luteolin present in Cynodon dactylon can be considered as a promising compound that can be investigated further for developing a novel drug for the treatment of tuberculosis. The presence of the selected phytochemicals in the plant was confirmed by high-performance liquid chromatographic analysis of the aqueous extract of Cynodon dactylon.

INTRODUCTION: Tuberculosis (TB) is a chronic pulmonary disease caused by Mycobacterium tuberculosis. Currently one- third of the human population is affected with TB. It kills more than 2-3 million people a year worldwide 1, 2.

The high virulence and the ability to enter latency for subsequent reactivation are the two features of Mycobacterium tuberculosis that make TB the most infectious disease. Antimicrobial therapy is one of the effective strategies used to control tuberculosis. First-line drugs, including rifampicin, isoniazid, ethambutol, pyrazinamide, streptomycin, and second-line drugs like capreomycin, kanamycin, and amikacin are the preferred choice for TB control. The emergence of multidrug-resistant TB ( MDR- TB) characterized by resistance to the first-line drugs and extensively drug-resistant TB( XDR -TB) defined as MDR- TB with additional resistance to at least one of the injectable second-line drugs gives formidable challenges to global TB control efforts. Delayed diagnosis and inappropriate treatment methods lead to the alarming emergence of totally drug-resistant (TDR) TB, which are essentially untreatable using current drugs 3. With the continuous increase in the number of drug-resistant TB cases, it is vital to identify drugs that could inhibit new druggable targets in M. tuberculosis 4-5.

Mycobacterium tuberculosis has an extremely rigid cell wall containing mycolic acid, which is responsible for its high virulence and persistence 6. Fatty acid synthase (FAS) is an enzyme that catalyzes the formation of these saturated fatty acids. FAS II is a group of discrete monofunctional enzymes and is absent in humans. Thus they are considered as a potential drug target against Mycobacterium tuberculosis. InhA is an NADH dependant transenoyl acyl carrier protein which is a part of the fatty acid biosynthesis system 7.

Currently, available drugs and vaccines have no significant impact on TB control. Therefore there is an urgency to develop new potential drugs against Mycobacterium tuberculosis. Natural products play an essential role in the management of TB 8. Products of natural origin contain a unique pool of incredibly diverse molecules that have specifically evolved to interact with biological targets and have already provided some invaluable leads for drug design 9. Plant-based medicines, in particular, are used widely by traditional healers in different parts of the world for the treatment of TB and TB-related symptoms. Many plant extracts and plant-derived chemicals have demonstrated anti-tubercular activity 10–12.

Plant-derived medicines can mitigate many of the side effects associated with synthetic drugs. Cynodon dactylon, commonly known as Bermuda grass is a weed traditionally used for curing different ailments. This plant is a folk remedy for cancer, hypertension, snakebites, cough, gout, and rheumatic affections. It has got anti-diabetic, antimicrobial, CNS depressant, and antioxidant activities also. The plant is a rich source of metabolites such as proteins, carbohydrates, mineral constituents, flavonoids, alkaloids, glycosides and triterpenoids 13.

The present work aims to analyze and identify the phytochemicals present in Cynodon dactylon with therapeutic potential to combat TB, by computational methods. Computer-aided drug design has become an established strategy for the identification of novel active chemicals through a combination of several drug design tools. Molecular docking is an in-silico technique that can be used to model the interaction between a target protein and a ligand at the atomic level. The protein structure and a database of potential ligands serve as inputs to a docking program. The aim of docking is to predict the best binding pose of a ligand to fit the binding site of a protein and evaluate its binding affinity using a scoring function 14. Phytochemicals in Cynodon dactylon are first subjected to ADME analysis, and non-toxic compounds are then investigated using docking studies.

Preparation of Protein: The enoyl acyl carrier protein reductase (InhA), one of the key enzymes involved in the type II fatty acid biosynthesis pathway of Mycobacterium tuberculosis was selected as the target protein. The crystal structure of target protein was retrieved from RSCB protein data bank (www.rcsb.org/pdb/home/home.do), (PDB ID:-2NSD) and is saved in .pdb format. All water molecules and hetero atoms were removed from the crystal structures by using PyMOL molecular graphic system, version 1.5.0.3 (www.pymol.org). Polar hydrogens were added to each protein and it was minimized by applying Kollman’s partial atomic charges. The minimized structure was saved in PDBQT file format.

Preparation of Ligands: The two-dimensional structures of ligands from Cynodon dactylon were taken from PubChem database and saved in structure data file (.sdf) format. All file conversions required for the docking study were performed using the open-source chemical toolbox Open Babel version 2.3.2 (www.openbabel.org). Ligands were minimized by computing gasteiger charges and saved in PDBQT format. Isoniazid was taken as the reference inhibitor. The NADH-dependent enoyl acyl carrier protein reductase encoded by the Mycobacterium gene InhA has been validated as the primary molecular target of the first-line antitubercular drug isoniazid 15.

Docking Methodology: Docking is a method used to predict the exact orientation of one molecule to another molecule when bound to each other to form stable complexes. Protein-ligand binding occurs spontaneously only when the free energy change is negative, and the difference in ∆G levels of complexed and unbound free state is proportional to the stability of the protein-ligand interaction. It follows that both protein folding and protein-ligand binding occur when ∆G is low in the system 16. Hence, negative ∆G scores indicate the stability of the resulting complexes with receptor molecules, and this is an essential characteristic of efficacious drugs 17.

Molecular docking was performed using the AutoDockVina program. Ligands were docked individually to the receptor protein. The ligand was in a flexible condition when interacting with macromolecules under rigid conditions. The grid size was set at 14 × 14 × 14 (x, y, and z) points, and the grid center was designated at x, y, and z dimensions of 66.55, 63.40, and 12.36 respectively, with a grid spacing of 1000 Å. The prepared file was saved in the .PDBQT format. Ligand-binding affinities were predicted as negative Gibbs free energy (∆G) scores (kcal/mol), which were calculated on the basis of the AutoDockVina scoring function 18. Post-docking images were visualized using Discovery Studio Biovia 2016.

Chromatographic Instrumentation: The chromatographic analysis was carried out with Agilent 1260 series HPLC system comprising a quaternary pump, a vacuum degasser, a variable wavelength detector, and a 20 µl sample injector. The separation was performed on Zorbax Eclipse Plus C18 column. 1mg sample was dissolved in 1mL of HPLC Grade Water. The detection wavelength was set at 348 nm. The mobile phase consisted of solvent A, Acetonitrile, and solvent B, 0.1% O-phosphoric acid-containing KH2PO4 (pH 3.5) (in a ratio of 15:85). The Gradient Elution profile was 0-10min- 85% B, 10-15min- 40% B, 15-20 min- 25% B and 20 -25 min- 85% B. The column thermostat was maintained at 25±1 ºC.

RESULTS AND DISCUSSION: All the phyto-compounds were evaluated for their drug-likeness through analysis of pharmacokinetic parameters required for absorption, distribution, metabolism, and excretion (ADME) by using MOLSOFT and PreADMET web tools. ADME prediction is the most crucial step in drug discovery. All the calculated ADME parameters of phytocompounds were tabulated in Table 1.

Oral administration is the most common route of drug administration. High oral bioavailability is often an important consideration for the development of bioactive molecules as therapeutic agents. Lipinski’s rule of five described four physicochemical properties for an orally active drug. (a) molecular weight, MW < 500 Da; (b) Octanol/water partition coefficient, MlogP< 5; (c) number of hydrogen- bond donors, (OH plus NH count) < 5; and (d) number of hydrogenbond acceptors, (O plus N atoms) < 10. These four physicochemical properties are associated with the aqueous solubility and intestinal permeability of the drug 19. Membrane permeation is recognized as a common requirement for oral bioavailability in the absence of active transport, and failure to achieve this usually results in poor oral bioavailability. Mlog P value indicates the lipophilicity of the drug.

The intestine is the primary site of absorption for the orally administered drugs. Hence the percentage of human intestinal absorption of the drugs and lead candidates is very important. Many drugs in plasma will get bound to serum proteins or whole blood proteins. It is commonly accepted that only unbound drugs may interact with anticipated molecular targets. The PPB value indicates the degree to which the drug binds to blood proteins. The Blood-Brain Barrier (BBB) protects the brain from toxic substances but restricts the entrance of many therapeutically important drugs. The BBB is a key barrier that limits the access of drugs to the brain in the treatment of Central Nervous System (CNS) TB. Thus in order to improve the treatment of brain TB, the drug should facilitate an increased passage across the BBB.

TABLE 2: DOCKING RESULTS OF DRUG LIKE INHIBITORS WITH INHA

A molecular docking approach was selected for the virtual screening of selected ligands (phyto-chemicals) which effectively bind with the protein receptor. The compound with greater binding energy with the receptor protein is selected as the best compound and is considered as the effective inhibitor of Mycobacterium tuberculosis.

The binding affinity value, number of hydrogen bonds involved in the protein-ligand interaction, and the amino acid residues of protein to which the ligand interacted were tabulated in Table 2. The pictorial representation of 2D and 3D interaction of the protein with selected ligands were shown in Fig. 2-5. 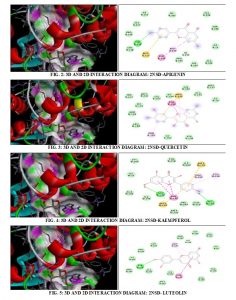 From the docking results, it is clear that among the selected phytocompounds from Cynodon dactylon, luteolin showed the highest binding affinity with the receptor protein. Luteolin formed one hydrogen bond with the amino acid residue TYR158 present in the binding site of InhA. It also showed weak van derwaal’s interaction with the amino acid residue ILE194 and pi-pi stalking interactions with PHE149 and MET199 present in the binding site of receptor protein. Apigenin got attached to the target protein through one hydrogen bond (TYR158), one pi-pi-T shaped (PHE149), one pi-alkyl (MET199) and one pi-sulphur (MET199) interactions. Kaempferol showed two hydrogen bonds (GLY192, ILE215), one pi-pi stalking (PHE149), two pi-sulphur (MET199, MET155), and three pi-alkyl (MET199, PRO193, LEU218) interactions with the protein. Quercetin made one pi-sulphur (MET199), one pi-pi stalking (PHE149), and one pi-alkyl (MET 199) interactions with the amino-acids present in the active site of target protein.

The docking score indicates that the binding affinity of all phytocompounds from Cynodon dactylon against Mycobacterium tuberculosisisis much higher than isoniazid, the commercially available drug. The type of interaction between the protein and ligand involves hydrogen bonding, vanderwaal’s interaction, pi-pi stalking, pi-pi-T-shaped, pi-alkyl and pi-sulphur interactions. The presence of luteolin in Cynodon dactylon was confirmed by HPLC analysis of its aqueous extract. 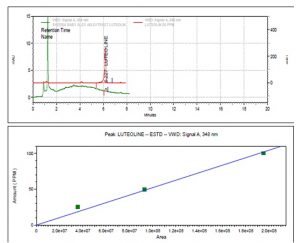 CONCLUSION: This study identified Luteolin as the most active antimycobacterial compound among the phytochemicals present in Cynodon dactylon that satisfied most of the molecular properties and ADME criterias. Luteolin showed good binding affinity to the target protein.

From the preliminary docking analysis, Luteolin can be suggested as a prospective drug candidate worth further investigation against TB.