ABSTRACT: Polycystic ovary syndrome (PCOS) is one of the most common disorders that occur in women at any age due to the endocrine hormone imbalance. The cause for this disorder is still not identified, but on recent research provided that disorder may be caused by some genetic variation. Predicting and understanding the effects of genetic variation that occurred in the gene are becoming more important for single nucleotide polymorphism to understand the molecular basis of genetic disease. From the literature survey, the candidate gene which is responsible for causing genetic PCOS was identified. In this work using computational methods, this candidate gene was analyzed completely to find out the genetic variation which in charge for altering the expression and the functional of the gene. On analyzing the gene, it was predicted that the protein which was translated from the gene played a key role for causing the major alteration in the gene. Using SNP analysis tool, further investigation were carried out to the disease causing protein and were predicted that the particular mutation occurred in the protein altered the function and structure of the gene. By using bioinformatics tool, an attempt was made to stop the mutation by replacing the original amino acid to the structure and sequence of the protein, which was suggested by the tools. Some clinical studies can be carried out further to confirm that the protein which was responsible for gene alteration in PCOS will function normally after some necessary modification are made in the protein which was suggested by computational methods.

INTRODUCTION: Polycystic ovary syndrome (PCOS) is a mysterious reproductive disorder that causes irregular menstrual periods 1. An average of 5 to 10 percent of women was found to have this disorder in their endocrine glands 2. PCOS women’s of overweight or obese would have higher risk of developing Type 2 diabetes 3 and infertility than the normal women 4.

The mode of inheritance and role of genetic factors in PCOS syndrome have not been fully investigated until now 5. The genes responsible for  altered expression  in PCOS causes genetic abnormality which  affects signal transduction ruling steroid genesis, steroid hormones action, gonadotropin action and regulation, insulin action and secretion, energy homeostasis, chronic inflammation and others 6, 7.

Several large research groups are actively searching for a genetic cause of this syndrome and noted out the increased level of insulin resistance in PCOS affected woman 8. A study was conducted to find out the main candidate gene which causes PCOS to women by collecting 50 candidate genes which are linkage and association with PCOS. That study resulted the cAMP-GEFII were identified as new candidate genes that may be involved in the genetic etiology of PCOS 9. The genes cAMP-GEFII, which is an intracellular signaling molecule that is activated by cAMP 10 and it was the direct target of cAMP in regulated exocytosis 11.

Later genetic causes of this syndrome were identified that if Single nucleotide polymorphisms i.e. mutation occurs in the candidate gene would resulted in PCOS 12, 13. Single nucleotide polymorphisms are single base (A, T, G, C) variations between genomes within a species 14. SNPs can also be used to track the inheritance of disease genes within families 15. When SNPs occur within a gene or in a regulatory region, it affects the stability and functions of the protein 16 due to deleterious amino acid changes occur in the protein sequences would play a very vital role in causing the disease by affecting the candidate gene’s functions 17. SNP analysis would help to identity the multiple genes associated with such complex diseases like cancer, diabetes, vascular disease and mental illness 18, 19. In this study, the candidate gene of PCOS was analysed using Bioinformatics and step were taken to stop the mutation occurred in the gene which result in normal gene function.

The domain and family of protein were identified using Pfam to understand the function of protein.

SNPs Analysis: The list of SNP’S (rs ID) present in the gene was predicted by submitting gene ID using NCBI- dbSNP. The dbSNP database shows the disease-causing clinical mutations as well as neutral polymorphisms which is present in the gene.

The SNP IDs of human cAMP-GEFII were submitted to identify where amino acid substitution occurs in gene and which affect the protein function. (http://siftdna.org/www/SIFT_dbSNP.html).

Screening for Non-Acceptable Polymorphisms (SNAP): The FASTA format of protein sequence and amino acid substitution were submitted to predict whether a nonsynonymous single nucleotide polymorphism (nsSNP) having a phenotypic effect or not.

NsSNP Analyzer: The FASTA format of protein sequence and amino acid substitution were submitted to predict the particular nonsynonymous (amino acid changing) SNP which cause a functional impact on the protein.

PANTHER: Evolutionary analysis of coding SNPs. The Gene ID of cAMP-GEFII was submitted to assign molecular functional effects of non-synonymous SNPs based on structure and sequence analysis (http://www.snps3d.org/).

SNPs3D: Pymol is a potent and interactive molecular visualization software tool and used to view the protein, ligand 21. The three dimensional structure of protein and ligand were visualized using Pymol and saved in PDB file format for further analysis 22.

The five (3 different & 2 same) domain and 1 family of protein were identified and found that all the 5 domain were significant. In the domain, 2 clan were found (CL0542 & CL0072) were predicted using Pfam are shown in the Table 2.

SNPs Analysis: From NCBI-Gene  database the  cAMP-GEFII  gene ID  11069 were  identified and  then the gene ID were  submitted to dbSNP database which predicted that  there were 193 SNPs ID (rsID) for this gene, in that some of them are nonsynonymous (ns) and synonymous, which occur in intron region and untranslated region. The non-synonymous (80) SNPs were taken for further analysis because the presence of non-synonymous SNPs can only affect the protein function and structure 25, 26. The list of non-synonymous SNPs was as shown in the Table 3.

Using Sift dbSNP database, nsSNP was analyzed to spot rsID (rs17852173) which was responsible for damaging the function and the structure of cAMP-GEFII were shown in the Table 4.

TABLE 4: SHOWS THE PREDICTION OF SNPs WHICH CAUSES DAMAGE TO cAMP-GEFII PROTEIN

Predicted nsSNP: The SIFT database predicted 6 nsSNP (G54E, P171R, S240F, H358R, H679P, P749) which causes damage to the gene. From SNAP, nsAnalyzer, Panther Database the exact SNP which affect the function of protein and also for the possibility of structural alteration were predicted. In SNAP database SNP of H679P were found to be Non-neutral with high Reliability index 5 when compared with other SNP which are neutral. From nsAnalyzer Database Phenotype of given SNP were analyzed H679P SNP were found to cause disease with siftscore of 0. Result predicted from Panther database show that SNP H679P does not show any multiple sequences position (MSA) when compare with other SNP were shown in the Table 5.

TABLE 5: SHOWS THE RESULT OF SNPs ANALYSIS OF cAMP-GEFII PROTEIN 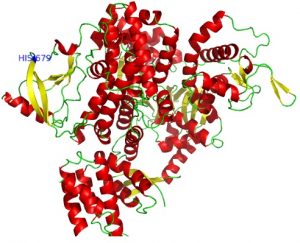 FIG. 1: 3D STRUCTURE OF PROTEIN OF cAMPGEFII WITH HISTIDINE IN 679th POSITION

CONCLUSION: Mutation occurs in the gene affects both the function and structure of the protein which lead to a disease in human. In the current study, the gene which was responsible for causing reproductive disorder of PCOS was identified. On further analyses of cAMP-GEFII gene using bioinformatics tools, it was predicted that mutation (SNP) present in the gene was in charge in causing disease.

From the above obtained result, we can conclude that non-synonymous SNP of rsID (rs17852173) in the cAMP-GEFII gene was not only affects the protein function and structure but also cause serious damage to gene. The investigation of rsID was carried out to identify the exact location of SNP occurred in the protein sequence and structure, resulted that H679P SNP presented in the protein played a vital role for the occurrence of PCOS in many women. The mutations (SNP) in the protein structure were dysfunction by replacing the amino acid Histidine (H) instead of proline (P) in 679th position of protein structure to make the protein function normally by Swiss PDB Viewer. Some clinical trials are needed in future to confirm that this disease can be treated well by altering the mutation in the gene.

ACKNOWLEDGEMENT: We acknowledge Vels Institute of Science, Technology and Advanced Studies (VISTAS) for providing us with required infrastructure and support system needed.

CONFLICT OF INTEREST: The authors declared no conflicts of interest.