ABSTRACT: Cancer is the abandoned growth of cells that invade and cause damage to surrounding tissue. Oral cancer appears as a growth or uncomfortable in the mouth that does not go away. Oral cancer, which includes cancers of the lips, tongue, cheeks, floor of the mouth, hard and soft palate, sinuses, and pharynx (throat). Tabocco and alcohol are recognized as the foremost risk factor for this oral cancer. HER2 (human epidermal growth factor 2) is one of the protein that plays a vital role in the growth of oral cancer. Limonia acidissima is widely known as wood apple against oral cancer an in-silico approach. The compounds of wood apple showed their anticancer properties against HER2 protein which could be used for further analysis.

INTRODUCTION: In-silico methods can help in identifying drug targets via bioinformatics tools. They can also be used to analyse the target structures for possible binding/active sites, generate candidate molecules, check for their drug likeliness, dock these molecules with the target rank them according to their binding affinities, further optimize the molecules to improve binding characteristics 1. Cancers of the oral cavity and oropharynx represent approximately 3% of all malignancies in men and 2% of all malignancies in women in the United States. It is estimated that these tumours will account for 28,900 new cases and 7,400 deaths in 2002 in the United States

Squamous cell carcinoma, which arises from the oral mucosal lining, accounts for over 90 percent of these tumours 2. Tobacco and alcohol are regarded as the major risk factors for oral and pharyngeal cancer in North America and in European countries 3.

Oral squamous cell carcinoma, the most common oral malignancy, often presents a clinical diagnostic challenge to the dental practitioner, particularly in its early stages of development. While the majority of such cancers are associated with a long history of smoking and alcohol abuse, there is an increasing awareness of oral cancer developing in those who do not engage in either of these risk behaviour. 4

Limonia acidissima Linn, syn. Feronia limonia (Rutaceae) is a moderate-sized deciduous tree grown throughout India. The fruits are woody, rough and contains enormous flavonoids, glycosides, saponins and tannins. It’s used as a substitute for bael in diarrheoa and dysentery. The bark and leaves of the plant are used for vitiated conditions of vata and pita while the fruits are used for treating tumours, asthma, wounds, cardiac debility and hepatitis. However there are very few reports are available for its anticancer property. Hence the present study aimed to focused to analyse the anticancer property of Limonia acidissima by in silico studies.

Docking studies were performed for natural compounds (ligands) from the plant Limoniaacidissima with HER2 of oral cancer by using iGEM DOCK suite.

Preparation of the protein structure:

The protein required for the docking studies has been retrieved from the Protein Data Bank at 1.3 Ǻ root mean square deviations (RMSD) resolution which represents a three dimensional structure of target HER2 (PDB : ID 3PP0) shown in Fig. 1.

Docking software iGEM dock was used to dock the protein HER2 of the oral cancer with the drug compounds. iGEMDOCK is an integrated virtual screening (VS) environment from preparations through post-screening analysis with pharmacological interactions.

Docking was performed by iGEMDOCK molecular docking software. During Docking, at first the molecules were prepared and bonds, bond orders, explicit hydrogen’s, charges, flexible torsions were assigned to both the protein and ligands. From the Docking, wizard ligands were selected and the scoring function used was iGEMDOCK score. If hydrogen bonding is possible, the hydrogen bond energy contribution to the Docking score is assigned a penalty based on the deviations from the ideal bonding angle. This option can significantly reduce the number of unlikely hydrogen bonds and also internal electrostatic interaction; internal hydrogen bond sp2-sp2 torsions are calculated from the pose by enabling the ligand evaluation terms.

The search algorithm is taken as iGEMDOCK and numbers of runs taken are 10 and max interactions were 2000 with population size 200 and with an energy threshold of 100 also at each step least 'min' torsions/translations/rotations are tested and the one giving lowest energy is chosen. If the energy is positive (i.e. because of a clash or an unfavorable electrostatic interaction), then additional 'max' positions will be tested. If the pose being docked is closer to one of the ligands in the list than specified by the Root Mean Square Deviation (RMSD) threshold, an extra penalty term (the Energy penalty) is added to the scoring function. This ensures a greater diversity of the returned solutions since the docking engine will focus its search on poses different from earlier poses f`ound. The energy penalty was set to 100, RMSD threshold was 2.00 and RMSD calculation by atom ID (fast) were set. Docking was conducted between Protein and Inhibitor which results in binding affinities in kcal/mol and docking run time. The compound which gives lowest binding energy is chosen as the best inhibitor. iGEMDOCK showed better overall performance in docking simulations when compared with other software. 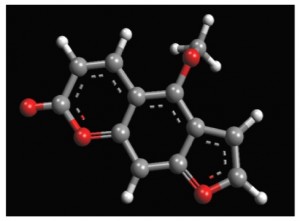 FIG. 2: THE CRYSTAL STRUCTURE OF THE TARGETS BERGAPTEN 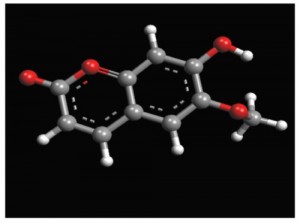 FIG. 3: THE CRYSTAL STRUCTURE OF THE TARGETS SCOPLETIN 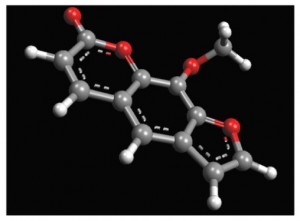 FIG. 4: THE CRYSTAL STRUCTURE OF THE TARGETS XANTHOTOXIN 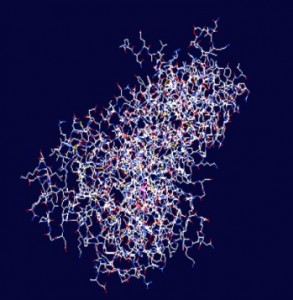 RESULTS AND DISCUSSION: Docking results of HER2 protein with compounds from Limoniaacidissima plant source were docked using iGEMDOCK software and docked scores of those molecules were represented in (Table 2), with their binding energy, Vanderwaal energy, electrostatic and hydrogen bond profiles. Binding energies of the protein-ligand (drug) interactions are important to describe how fit the drug binds to the target macromolecule. Ligands such as Bergapten, Scopoletin, Xanthotoxin were selected for docking studies against HER2 and docked. The Ligands Scopoletin (-81.98), Bergapten (-79.54), Xanthotoxin (-77.35) docks into the binding pockets of HER2 protein. The docked poses of the molecules were represented in (Fig. 5-6). From the analysis of docking score and energy, the Scopoletin (-81.98) showed the best results than other ligands. The best molecule showing lowest binding energy i.e., Scopoletin (-81.98) is the effective inhibitor for the inhibition of HER2 of oral cancer.

CONCLUSION: The protein-ligand interaction plays a significant role in structural based drug designing. It has been clearly demonstrated that the approach utilized in this study is successful in finding anti-cancer inhibitors from Limonia acidissima. The ligand Scopoletin (-81.98) showed lowest binding affinity against HER2 (PDB ID: 3PP0). It exactly fit into the active site region and the ligand formed more number of H-bond interactions than the co-crystallized ligand. Therefore, this study states the importance of compounds from Limonia acidissima and their use to enhance protein ligand interaction studies, in-silico. From the docking results, it is possible to conclude that Scopoletin could be a potential HER2 inhibitor.

TABLE 1: BINDING ENERGY AND HYDROGEN BOND INTERACTION FOR THE BEST   COMPOUNDS DOCKED AGAINST HER2 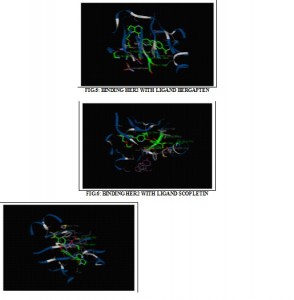