ABSTRACT: Tuberculosis (TB) is a disease caused by a bacterium called Mycobacterium tuberculosis. The bacteria usually attack the lungs. Tuberculosis is a global health threat and infecting about one third of the human population. Despite having a variety of anti-tuberculous drugs and availability of effective chemotherapy and Bacille-Calmette –Guerin (BCG) vaccine, tuberculosis remains a leading infectious killer world-wide. This has prompted an urgent need of new drugs and the identification of new drug targets. GlmU is a bifunctional acetyltransferase/uridyltransferase that catalyses the formation of UDP-GlcNAc from GlcN-1-P. UDP-GlcNAc is a substrate for two important biosynthetic pathway: lipopolysaccharide and peptidoglycan synthesis. The glmU protein is essential in Mycobacterium tuberculosis, being required for optimal bacterial growth. Since inhibition of GlmU affects peptidoglycan synthesis which often results in cell lysis, M. tuberculosis GlmU is a potential anti-tuberculosis drug target. The primary protein sequence analysis was done using protparam tool and secondary structure prediction was done using SOPMA. The NTP_transferase domain and IspD domain found in GlmU protein were identified by SMART and its 3D structure prediction was done using modeller. Model quality was analyzed using PROCHECK and showed 91.7% of residues in most favored region in Ramachandran plot. Further the active site residues of bifunctional GlmU proteins were identified from Catalytic Site Atlas (CSA) and catalytic residues were Glu-385 and Arg-19. This in silico sequence and structure analysis is helpful for identification and validation of drug target in Mycobacterium tuberculosis.

It was first discovered in 1882 by Robert Koch, M. tuberculosis has an unusual, waxy coating on its cell surface (primarily mycolic acid), which makes the cells impervious to Gram staining 1. The physiology of M. tuberculosis is highly aerobic and requires high levels of oxygen 2. It does not retain any bacteriological stain due to high lipid content in its wall, and thus is neither Gram-positive nor Gram-negative; hence Ziehl-Neelsen staining or acid-fast staining, is used. M. tuberculosis divides every 15-20 hours, which is extremely slow compared to other bacteria 3.

In 1995, an outbreak occurred in a rural area in the United States considered to be at low risk for TB 4. The strain, designated CDC1551 or CSU 93 by the Centers for Disease Control and Prevention (CDC) attracted special attention because of an unusually high rate of transmission as evaluated by skin test conversion. Infection with CDC1551 was not associated with an obvious increase in active TB cases, nor did any patients have extra pulmonary disease.  M. tuberculosis CDC1551 is not unusually virulent but rather more immunogenic and that it induces a rapid and vigorous cytokine response 5.

As per the WHO Global TB Report 2011, there were an estimated 8.8 million incident cases of TB globally in 2010. Though India is the second-most populous country in the world, India has more new TB cases annually than any other country contributing to a fifth of the global burden of TB. It is estimated that about 40% of Indian population is infected with TB bacillus (http://www.tbcindia. nic.in).

Even though varieties of anti-tuberculous drugs and effective chemotherapy and Bacille-Calmette –Guerin (BCG) vaccine are available, tuberculosis is highly infectious and treatment options are often limited, due to the emergence of multi-drug (MDR) and extreme drug resistant (XDR) TB strains. This has prompted an urgent need of new drugs and the identification of new drug targets.

Predicting transmembrane topology: Transmembrane helices and topological domains were predicted using TMHMM server (http://www.cbs.dtu.dk/services/TMHMM). This method is based on Hidden Morkov model, TMHMM correctly predicts transmembrane helices it can discriminate between soluble and membrane protein with both specificity and sensitivity 10.

Prediction of DNA binding protein: To predict whether the protein can binds to DNA or not, DNA Binding Protein Prediction server (http://www.enzim.hu/~szia/dnabind.html) was used. This server predicts DNA-binding protein from its structure or sequence 11.

Primary protein sequence analysis: The sequence of GlmU (NP_335483.1) contains 513 amino acids with molecular weight 53520.3 Da. The physicochemical properties of the protein by Protparam tool were shown in Table 1. The extinction coefficient of GlmU was 24535 and absorption was 0.1%, indicates how much a protein absorbs light at a certain wavelength. The instability index provides an estimate of the stability of protein in a test tube. The aliphatic index of a protein is defined as the relative volume occupied by aliphatic side chains (alanine, valine, isoleucine, and leucine). It may be regarded as a positive factor for the increase of thermostability of globular proteins. 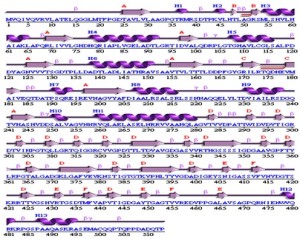 FIG. 1: GRAPHICAL VIEW OF SECONDARY STRUCTURE OF GlmU BY PDBsum

Merly D. P et al (2012) used SMART and pfam to identify domains in PtpA protein of mycobacterium tuberculosis and domain identified was Tyrosine Phosphatase domains which has catalytic activity. Unlike this Reddy et al., (2009) used PRODOM to identify domain in STK11 protein which was involved in PJ Syndrome.

FIG. 2: NTP_TRANSFERASE DOMAIN AND ITS SEQUENCE

FIG. 3: IspD DOMAIN AND ITS SEQUENCE

Signal peptide: The four signal peptides were predicted using SMART as shown in Fig.4. The sequences of signal peptides along with their position were represented in Table 3. The signal peptide is typically between 15 and 40 amino acids long and is essential for protein secretion. 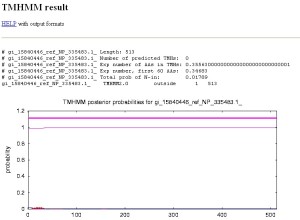 Homology modeling:Homology modeling of GlmU was done using Modeller 9v8. The sequence was searched against PDB for template selection. Four good templates such as 3D8V, 3FOQ, 3SPT and 2QKX were selected with their identities 100%, 100%, 100%, and 99% respectively. Among four PDB templates, 3PST was chosen as best template and four potential models were built by modeller. Finally, the model with lowest DOPE score was selected as shown in Fig. 6 and further submitted to PROCHECK for model quality analysis.

Ramachandran plot as shown in Fig. 7 represents the different regions of the plot. Residues in most favored regions are 91.7%, additionally allowed regions 8%. Hence PROCHECK analysis revealed that the model is of good quality. Table 5 shows the structural evaluation from the Ramachandran plot. 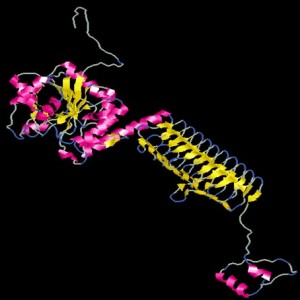 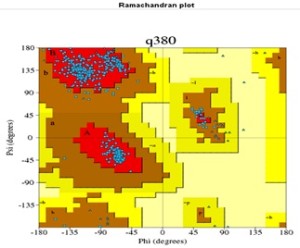 Active Site Prediction: The active site residues of bifunctional protein GlmU were identified from Catalytic Site Atlas (CSA) and catalytic residues were Glu-385 and Arg-19. The active sites and other structural features of GlmU were visualized using Rasmol as shown in Fig. 8. 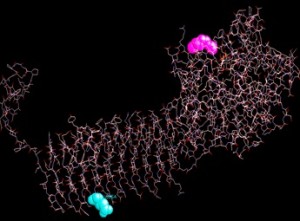 Protein function prediction: The function of GlmU was predicted using ESG server. ESG reveal the molecular function, biological function and the percentage distribution of the protein in different cellular components as shown in Table 5, 6 and 7 respectively. ESG predicted that molecular function of GlmU were UDP-N-acetylglucosamine diphosphorylase activity and nucleotidyltransferase activity with 99% probability. GlmU protein was mainly involved in cell wall organization and peptidoglycan biosynthetic process and its subcellular location was cytoplasm.

TABLE 6: BIOLOGICAL PROCESS IN WHICH GlmU IS INVOLVED

GlmU protein was predicted as non DNA binding protein using DNA Binding Protein Prediction server. The molecular modeling of GlmU protein was carried out using MODLLER. Model quality was analyzed using PROCHECK and showed 91.7% of residues in most favored region in Ramachandran plot. Hence it is a good quality model. The active site residues were Glu-385 and Arg-19.