ABSTRACT: Emergence of resistant bacterial and fungal strains towards existing antimicrobial agents is one of the major motives for research and development of new molecules to defend them. Oxadiazole is a major compound of heterocyclic nucleus for the development of new drugs. Oxadiazole ring system could be incorporated into many more ring systems which itself have their own activity and could lead to potent and highly active compounds. In silico is an expression used to mean "performed on computer or via computer Simulation”. Docking is a method used to identify the fit between a receptor and a potential ligand. In this research work In silico design of 2,5-disubstituted 1,3,4-oxadiazole derivatives were carried out by Schrodinger software for antimicrobial activity. The antibacterial and antifungal proteins were selected from Protein Data Bank and docked with hundred derivatives of 2,5-disubstituted 1,3,4-oxadiazole by using glide XP. Then five derivatives with highest glide Score were selected and synthesized. Synthesis was a microwave cyclisation reaction between hydrazide and various aromatic acids. The newly synthesized derivatives were characterized and confirmed by physical and spectral studies. These compounds were screened for antibacterial activity against Escherichia coli and Staphylococcus aures, antifungal activity against Aspergillius niger and Candida albicans. Synthesized compounds exhibit significant biological activity and can certainly hold greater promise in discovering safer biologically active molecules

In recent years, different kinds of targets in key areas of the bacterial cell cycle have been studied that would be a new approach against the problem of drug resistance. One of the most attractive biochemical pathways to be used as the target for new antibacterial agents is the fatty acid biosynthesis (FAB).

This pathway has been demonstrated to be essential for bacteria cell survival. A key enzyme in this pathway is β-ketoacyl-acyl carrier protein synthase III (FabH), which is the enzyme responsible for the first reaction in the pathway and plays an important regulatory role. These facts suggest the idea that FabH can be used as an effective molecular target for the development of new antibacterial agents 1. The incidence of fungal infections continues to increase rapidly because of the increased number of immunocompromised patients (AIDS, cancer and transplants). Candida species is one of the most well-known fungal pathogens which accounts for majority of fungal infections occurring worldwide. Resistance to wide spectrum antifungal agents has initiated the search for new therapeutic agents, including those produced by the modification of existing antifungal drugs.

1,3,4-oxadiazole belongs to an important class of heterocyclic compounds and serves both as biomimetic and reactive pharmacophores and many are key elements with potential biological activities such as antibacterial, antifungal, anticancer etc1. Based on these findings, with the aim of developing new antibacterial and antifungal agents, we planned to synthesize 2,5disubstituted 1,3,4-oxadiazole derivatives, together with the hope of potent activity and lower toxicity. These compounds were studied for antibacterial activity against Escherichia coli and staphylococcus aures, antifungal activity against Aspergillius niger and Candida albicans. 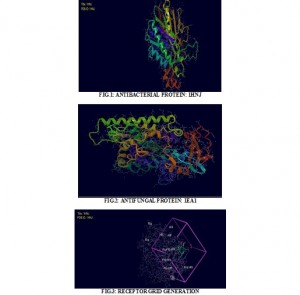 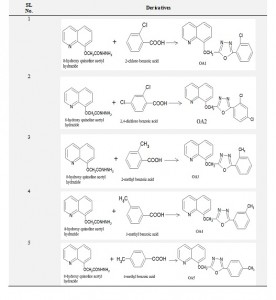 The well was made using a 5mm cork borer sterilized using flame and alcohol.

A sterile swab was dipped into nutrient broth culture and was rotated firmly against upper inside wall of the tube to expel the excess fluid. The entire surface of Mueller Hinton agar medium (MHA) was lawned with the swab soaked with inoculum. As soon as the MHA was partly solidified, the plates were inverted and left for 2hrs. When cooled, wells were made on the soldified medium in the plate. 100µl of various samples dissolved in DMSO was introduced into the wells. The plates were incubated overnight at 370C. Microbial growth was determined by measuring the diameter of zone of inhibition and compared with that of standard antibiotics. For each bacterial strain, controls were maintained where DMSO was used instead of sample.  The results were obtained by measuring the zone diameter.

Drops of fungus culture was mixed with the warm, melted, autoclaved Potato Dextrose Agar medium and poured into separate plates under aseptic conditions. The plates were covered and allowed to cool. As soon as the agar was partly solidified, the plates were inverted and left for 2h. When cooled wells were made on the solidified medium in the plate.  The well was made by using a 5 mm cork borer that was sterilized with alcohol and flame. Samples were dissolved in DMSO and pipetted into the different wells in a sterilized environment in separate plates, using a micro pipette. DMSO was used as control. The plates were labelled, covered, inverted and placed in room temperature for about one week. After one week plates are examined for fungal growth and for zone of inhibition around the wells and compared with standard antifungal agents.

Molecular docking studies were carried out on hundred analogues of 2,5disubstituted 1,3,4-oxadiazole by flexible docking using XP GLIDE (Extra Precision). According to the highest docking score and availability of chemicals, out of these hundred analogues, five analogues were chosen for wet lab synthesis.

The compound OA4 exhibited highest docking score. OA4 has a m-methyl substituted benzene ring at 5th position of 1,3,4-oxadiazole nucleus, so substitution with the same improves the binding interactions between protein and ligand. 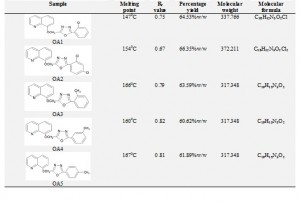 The synthesized analogues were taken for antibacterial screening. Streptomycin was used as standard for both gram positive (Staphylococcus aureus) and gram negative organism (Escherichia coli).

TABLE 9: ZONE OF INHIBITION OF SAMPLES 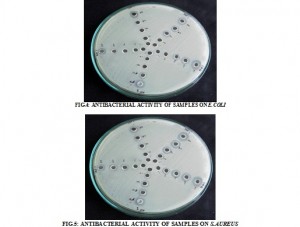 The synthesized analogues were taken for antifungal screening. Clotrimazole was used as standard for both fungi Candida albicans and Aspergillius niger.

TABLE 11: ZONE OF INHIBITION OF SAMPLES 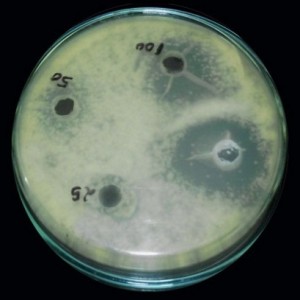 CONCLUSION: The present research work involved in the preliminary in silico molecular modeling studies of 2,5-disubstituted 1,3,4-oxadiazole derivatives using Chem Sketch, molnspirstion, and PASS Online softwares and docking using schrodinger (Mastero 9.2). Among the proposed analogues, those obeying Lipinski rule of five were selected for the wet lab synthesis. Synthesis of five analogues was performed and the purity of the same was ascertained by consistency in melting point and Rf value. The compounds were characterized by IR and MASS spectral studies. The synthesized analogues were screened for various biological activity studies, which includes, antibacterial and antifungal studies as per docking score. The activities of the screened analogues were promising.

ACKNOWLEDGEMENT: I take this opportunity to convey my sincere thanks to Mr. Raghu and Mr.Vinod Daivaraji, Application Scientist, Schrödinger Inc, for giving Schrödinger software which was very helpful in carrying out my docking studies.