ABSTRACT: Malaria caused by the parasite Plasmodium falciparum is a major public health concern. The parasite lacks a functional Tricarboxylic acid cycle (TCA), making glycolysis its sole energy source. One such enzyme is triose phosphate isomerase. This catalyzes the isomerization of D-Glyceraldehyde 3 phosphate to dihydroxy acetone phosphate. An attempt was made to identify the potential phyto inhibitors and inhibit the enzyme as well as to modify their side chain to impure the binding efficiently. Here, two datasets are made such as training set and testing set, in which first, is training set, contain 19 known inhibitors against Triosephosphate Isomerase and second is testing set which contain 6 phyto-inhibitors to be tested. Autodock Vina, a docking tool, is used for molecular docking that utilizes information on conformational variability from ensembles of experimental receptor structure ofTriosephosphate Isomerase. We showed that experimentally determined binding orientations and computed energies of known Ligands can be reproduced accurately. It also reported that the presence of phosphate groups in a ligand confers better stable docking

INTRODUCTION: Malaria is a leading cause of morbidity and mortality globally and the majority of malaria-related mortality is caused by Plasmodium falciparum and approximately 1.5 million people die of the disease; the majority of them are children 1. The reemerging of malaria in many parts of the world is due to the rapid increase of resistance to most of the available anti-malarial drugs, as well as resistance of vectors to insecticides 2, 3. Drug resistant strains of P. falciparum have been found in many endemic areas of the world and many of conventional anti-malarial drugs have been associated with treatment failure.

Recent research suggests that open collaborative drug discovery will be the future paradigm of biomedical research 5, 6, 7. Unlike the historical method of drug discovery, by trial and error testing of chemical substances on animals, and matching the apparent effects to treatments, in silico drug design begins with a knowledge of specific chemical responses in the body or target organism and tailoring combinations of these to fit a treatment profile. The drug discovery process is aimed at discovering molecules that can be very rapidly developed into effective treatments to fulfill unmet medical needs.

Triosephosphate isomerase (TIM) is an enzyme that is only active in its dimeric form and that has been found in the almost all organisms that participate in glycolysis. The aldolase (fourth) step of glycolysis ends with two products: dihydroxyacetone phosphate (DHAP) and d-glyceraldehyde 3-phosphate (GAP). Only GAP is able to proceed to the next phase of glycolysis. During the fifth glycolysis step, TIM catalyzes the reversible isomerization of dihydroxy-acetone phosphate (DHAP) to d-glyceraldehyde 3-phosphate (GAP) (see Fig. 1). TIM is essential for maximum energy production. TIM has been described as an attractive target for drug design against parasites because of its important role in glycolysis, triosephosphate isomerase4. Thus the glycolytic enzymes provide a good drug target 8, 9.

Computer-aided drug design (CADD) methods are dependent on bioinformatics tools, applications and biological databases. An attempt was made to identify the potential drug to inhibit the enzyme as well as to modify their side chain to improve the binding efficiency.  The process involves the prediction of ligand conformation and orientation within the targeted binding site. The suitable ligand is chosen by the scores that are obtained at the end of the docking process. The least vina score is preferred as it indicates more stability.

Most ligand binding proteins have just one binding site per polypeptide chain. Ligand binding sites on proteins are usually depressions on the surface of the protein, with the size and shape dependent upon the nature of the ligand 12.

An attempt was made to identify the potential drug to inhibit the enzyme as well as to modify their side chain to improve the binding efficiency.

The selected PDB Id of Triosephosphate isomerase is 3PVF which is not complexed with substrate analog.

Complex Preparation: Each of the PDB files of the 150 complexes was processed according to the following protocol: the ligand was extracted, bond orders and correct protonation state were assigned upon visual inspection, and the structures were saved. A clean protein file was generated after removal of the ligandprotein file was generated by removing subunits not involved in ligand binding and far from the active site, solvent, counterions, and other small molecules located away from the binding site. Hydrogen atoms were then added to the protein, and the structures of protein, ligand, and cofactor were combined in a single Macromodel file. The hydrogen atoms were minimized for 1000 steps with Macromodel in OPLS-AA force field, with all non-hydrogen atoms constrained to their original positions 13.

Ligands selection and Active Site Prediction: The ligand which had two dimensional similarities with the substrate analogs were traced from PDB. Ligand data is collected from online chemical databases such as Chemspider (http://www.chemspider.com/), Drugbank (http://www.drugbank.ca/), ZINC (http:// zinc.docking.org/), pubchem (http://www.  ncbi.nlm.nih.gov/pccompound) and ligands which are not available in chemical structure databases are drawn in the tool named MarvinSketch (http://www.chemaxon.com/products/marvin/marvinsketch/) after collecting structures in various litterateurs. MarvinSketch allows users to quickly draw molecules through basic functions on the GUI and advanced functionalities such as sprout drawing, customizable shortcuts, abbreviated groups, default and user defined templates and context sensitive popup menus. Ligands are used in .sk2, .mol2 and .pdb format.

Q-SiteFinder (www.modelling.leeds.ac.uk/ qsitefinder/) is a new method of ligand binding site prediction. It works by binding hydrophobic (CH3) probes to the protein, and finding clusters of probes with the most favorable binding energy. The proteins are initially scanned for ligands. Potential ligands are identified. The option is available to retain atoms as protein (this would be applicable to covalently bound residues such as peripheral carbohydrates), treat the atoms as ligands or discard them from analysis completely.

Autodock Vina: AutoDock Vina (vina.scripps.edu/) is one of the apt and reliable softwares available for drug discovery, molecular docking and virtual screening which was designed and implemented by Dr. Oleg Trott. Vina is offering a multi-facet capability, high performance rate and enhanced accuracy to facilitate effortless usage. This software can be operated with the help of AutoDockTools or command line instructions 16.

Three key steps are involved in the docking simulations:

1)      Preparation of protein (rigid and flexible)

Vina does not require receptor files and GRID files as input, docking of a single molecule is made easy with command line instruction but virtual screening of larger databases is possible only, if the user is familiar with shell scripting. 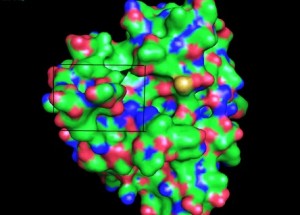 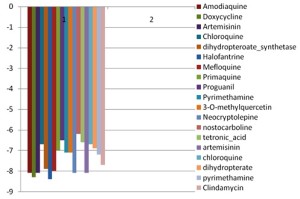 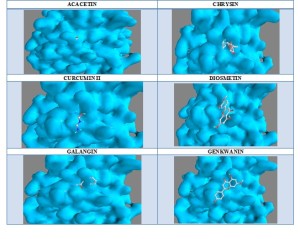 TABLE1: DOCKING SCORE OBTAINED WITH AUTODOCK VINA WITH AND WITHOUT MODIFYING THE INHIBITORS WITH PO4 BOND

RESULTS AND DISCUSSION: Plasmodium  falciparum Triosephosphate isomerase structure is retrieved from protein data bank form available 80 entries. Autodock Vina uses a sophisticated gradient optimization method in its local optimization procedure. The calculation of the gradient effectively has given the molecular optimization  algorithm from a single evaluation 7, 17. Prediction of interaction energies between ligand and receptor has been accurately calculated. Training set has exhibited average binding energy of -7.4 which represents the binding energy of potent TIM inhibitors, the data is shown in Fig. 2.

Similarly, attempts were made to inhibit the enzyme activity using testing set. Table 1 shows binding energy of testing set in which Acacetin has given highest binding energy. Further, attempt is made to enhance docking results by modifying testing set molecules with phosphate group. Docking results of testing test with TIM showed favorable energy values. It was reported that the presence of phosphate groups in a ligand confers better stable docking.

FUTURE ASPECTS: The future insight would be to search for other possible modifications in the proposed molecules, to get a better drug with high binding efficiency. The drugs can be studied experimentally to identify their efficiency in binding and inhibiting the enzyme.

ACKNOWLEDGEMENT: We thank to Prof. Rajendra Mandage for his support and all our classmates who helped us to accomplish this study.