ABSTRACT: Leprosy is a chronic granulomatous disease caused by acid-fast bacilli Mycobacterium leprae. It is most prevalent in tropical countries and poses a threat to over 122 countries across the globe. In 2012, 232857 new cases of leprosy were registered in the world. World Health Organization (WHO), recommended the Multi Drug Therapy (MDT) for treatment of leprosy, but the minimum duration of treatment ranges from 6-12 months. Therefore, the need of a new putative target for treatment of leprosy, which is effective in leprosy and reduces the duration of treatment. The Proteome information available suggests that among the 1603 proteins in M. leprae TN, a staggering 27% or more remains classified as hypothetical uncharacterized set of proteins. In this present work we, assign the probable functions of hypothetical set of proteins present in M. leprae to explore their plausible role as new putative drug targets. Out of 442,177 hypothetical protein sequences had GO term. Of these, 43 sequences had disease ontology (DO) term, 59 sequences had human phenotype (HP) term and out of these 43 sequences, 16 sequences were found to contain only DO term, while 27 sequences had both HP and DO term. Out of 177, 15 sequences were found to be associated with 39 KEGG reference pathway pathways. Out of 39 pathways, inositol phosphate metabolism, fatty acid degradation, ethylbenzene degradation, sulfur relay system and limonene & pinene degradation were common metabolic pathway, which might be used as putative drug target for M. leprae.

INTRODUCTION: Leprosy is a chronic granulomatous disease and is also known as Hansen's disease (HD) 1. The disease is caused by an acid-fast, rod-shaped bacillus Mycobacterium leprae. The clinical manifestations of leprosy are bacillary infiltration, lesions on skin, peripheral neuropathy and various immunological reactions.2 It is an endemic disease and is spread out in tropical counties.

According to the World Health Organization (WHO) more than 115 countries were affected by leprosy, and around 189018 prevalent cases were registered till the first quarter of 2013 3. Moreover, 232857 new cases of leprosy per 100000 populations were registered during 2012. The regional distribution of the disease is given in Table 1. Overall 25 countries of the African region, 28 Americas region, 20 Eastern Mediterranean regions, 11South-East Asia region and 31 countries of the Western Pacific region were included. However, 134752 new cases were reported in India in the year 2012 3. The number of cases in 2012 was higher as compared to the cases reported in recent years as shown in Fig. 1.

In 1982, the WHO classified leprosy, based on the bacterial index (BI). It becomes paucibacillary (PB) when BI goes lower than 2 and multi-bacillary (MB) when BI increases more than or equal to 25. WHO campaign for leprosy with the support of private foundations and pharmaceutical companies was for the recommendation of Multi Drug Therapy (MDT) 6. Now-a-days, genome sequencing provides fast and reliable solutions to identify the whole information of the genome. The genome sequencing of M. leprae samples from Tamil Nadu, India was performed by Cole et al. in the year 2001 using a combination of sequenced cosmids from multiplex sequencing and end sequences from the genome shotgun library using dye termination on automated sequencers. M. leprae TN genome belongs under SNP type 1 and subtype A. The molecular weight of the genome is 2.2 x 109 Daltons, containing 3,268,203 base pairs (bp) and G+C (guanine + cytosine) content of 57.8%. The genome contains 49.5% of total genome as protein-coding gene, 27% of pseudo genes and remaining 23.5% of genome does not show any expression 7. The total 1603 proteins are available in different protein database out of them, 442 protein sequences are hypothetical and uncharacterized. 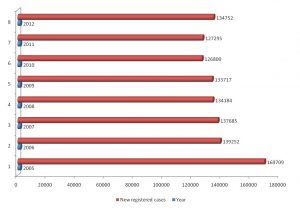 FIG. 1: REPORTED CASE OF LEPROSY ACROSS THE GLOBE

TABLE 1: WHO REPORT ON THE PREVALENCE OF LEPROSY?

Sequence based drug target identification: The proteome information available suggests that among the 1603 proteins in M. leprae TN, a staggering 442 remains classified as a hypothetical uncharacterized set. The result of Hmmscan suggested that out of 442 hypothetical uncharacterized hypothetical sequences, 311 sequences had at least one Pfam domain associated with the query sequences. After excluding spurious annotations, we predicted the functional annotated conserved domain from CD batch search for 311 sequences with an e value of 10-3, against conserve domain database (CDD). At last, we found 1685 functional annotated conserved domain which were widely distributed in 268 sequences.

Essential genes in prokaryotes have a minimal genome, which play the key roles in metabolism. Database of Essential Gene (DEG) constitute a minimal genome, forming a set of functional modules, which play the important role in metabolism. DEG BLASTp report suggested that out of 177 sequences, 101 sequences had at least one prokaryotic DEG homologous sequences. These 101 sequences were found to contain 494 DEG homologous genes. These sequences might be used as putative drug target for M. leprae (supplementary Table 2).

In our sequence, the no. of genes having homologs with DEG: 101 genes

In DEG, the no. of genes having homologs with our sequence: 494 genes

KASS was used to predict Pathway associations for the 177 sequences that have GO term and had at least one functional annotated conserved domain. KASS was performed using the BBH method (Best bidirectional Hit) from which we found that 50 sequences had KEGG orthology hits. Out of these 50 hits, 15 sequences were found to be associated with 39 KEGG pathways, which are shown in supplementary Table 3. KASS report provides important information about the protein (enzyme) associated in metabolic pathway.

Homology based metabolic pathway reconstruction: Sequence information for metabolic pathway was retrieved from the KEGG database and MetaCyc 19.  Enzyme catalyzing each step in the reference metabolic pathway was used as query to search against UniProt-KB database for homologs in M. Leprae TN using NCBI protein blast (BLASTP) at an e value of 10-3. Hits considered as true positive (homologs), when it had an identity of >30% and a coverage of >70%. Further, homologs founds within M. leprae TN were using COG modules of String database to understand the conservation of gene. Resultant, we found that inositol phosphate metabolism, fatty acid degradation, ethylbenzene degradation, sulfur relay system and limonene and pinene degradation were common metabolic pathways, which might be used as drug target in M. leprae. Here we reconstruct the Inositol phosphate metabolism because it is a common drug target in various Prokaryotes as well as in cancer cell.

Interaction of query protein against COG was depicted in Fig. 3A and Phylogenetic analysis of query with other COG proteins were depicted in Fig. 3-B. There are two enzymes, Q57240 (COG1260) andP46813 (COG0483), which catalyzes the reactions in inositol phosphate synthesis and are conserved in M. leprae. Out of these two proteins, one protein (Q57240) is a hypothetical protein. 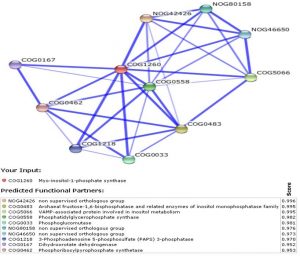 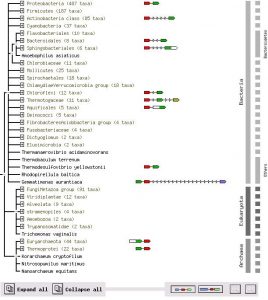 FIG. 3B: PHYLOGENETIC ASSOCIATION OF QUERY PROTEIN AGAINST COG PROTEINS

Out of 177 protein sequences which had GO term, 101 sequences displayed homology with Prokaryotes. These 101 sequences were found to be homologous with 494 DEG genes. KASS was used to predict Pathway associations for these 177 sequences and we found that 50 sequences had KEGG orthology hits. Out of 50, 15 sequences are found to be associated with 39 KEGG pathways 28, 29. These protein sequences regulated the various metabolic pathways 30. However, out of 39 pathways, inositol phosphate metabolism, fatty acid degradation, ethyl-benzene degradation, sulfur relay system and limonene & pinene degradation were common metabolic pathway, which might be used as putative drug target for M. leprae.  Further, we reconstructed the homology based inositol metabolic pathway for M. leprae.

CONFLICT OF INTEREST: The authors have no Conflict of Interest.