INTRODUCTION: The L-Glutaminase enzyme produced by microbes has gained medical importance as it can be used for the treatment of certain types of human cancers, especially, lymphocytic leukemia. L-Glutaminase production is economical, and its usage is eco-friendly. Its cost is very low when compared to expensive commercial drugs. The L-Glutamine is an important amino acid for the living cells. It is available in the regular diet, and even it is synthesized by the living cells by the catalytic activity of L-glutamine synthetase.

In cancer cells, the activity of L-glutamine synthetase is ceased, and thus they depend upon the L-Glutamine that is transported through blood (digested food nutrient). In the blood of leukemia patients, L-Glutaminase converts L-Glutamine into L-Glutamic acid and ammonia. Hence, L-Glutamine is not available to cancer cells, and eventually, they die. In addition, L-Glutaminase is used in the food industry in the preparation of fermented foods like soy sauce 1-3.

Proteins are important biomolecules as they perform various functions in living cells. Some microbial proteins are commercially important, especially proteins with therapeutic value and industrial importance. Developing a protein structure by performing experiments is a laborious and time-consuming process. On the basis of primary structure, i.e., amino acid sequence, the structure of a protein can be generated using bioinformatics software tools. Many of the protein modeling software tools are available as web-based tools 4. The various web-based computational tools available for protein modeling are SWISS-MODEL workspace, 3-D JIGSAW, PHYRE, PUFUE, THREADER, mGENThreader, etc.

In the present work, the amino acid sequence of L-Glutaminase enzyme protein in FASTA format derived from the UniProt database server was used to develop L-Glutaminase structural model in SWISS-MODEL workspace. Then model quality was checked in PROCHECK and SPDBV (Swiss PDB Viewer) and validated.

Homology Modeling of L-Glutaminase Enzyme Protein: The FASTA format of L-Glutaminase enzyme protein sequence was used to develop the corresponding structural model by automated mode in SWISS-MODEL workspace. The SWISS-MODEL workspace is a user-friendly server that needs the input of an amino acid sequence of protein in FASTA format to build a corresponding protein model 6.

Verification of Model Quality of the L-Glutaminase Enzyme Protein Model: The modeled structure of L-Glutaminase enzyme protein was checked in PROCHECK using Ramachandran plot 7 and based on RMSD (root mean square deviation) value obtained between main-chain atoms of L-glutaminase model and its template model in SPDBV 8.

The L-Glutaminase enzyme is composed of 308 amino acids. UniProt Knowledgebase is a protein resource database which is composed of sequential, structural, and functional information of proteins. Users can retrieve desired protein sequences in FASTA format. Desai et al., obtained the amino acid sequence (FASTA format) of protein X of Hepatitis B virus from the UniProt database and its 3-D structure was modeled in Phyre 2 9.

The tetramer form of L-Glutaminase is formed by the union of two dimers. The monomers are intimately associated in each dimer. Thus, the tetramer can be regarded as a dimer of dimers 11. In SWISS-MODEL, the sequences of two homodimers (identical chains A and B) of L-Glutaminase enzyme protein were aligned with the template, 1u60.1.A sequence Fig. 1. The homodimer form of the L-Glutaminase enzyme protein model Fig. 2 with two identical subunits (A and B) was generated based on the template (1u60.1.A) model Fig. 3. Ghosh et al., 12 generated the modeled structure of freshwater fish ATPases in the SWISS-MODEL workspace.

FIG. 1: ALIGNMENT OF SEQUENCES OF TWO CHAINS, A AND B (HOMODIMER) OF L-GLUTAMINASE ENZYME WITH THE TEMPLATE, 1u60.1.A SEQUENCE 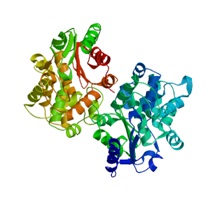 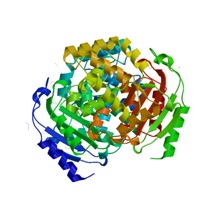 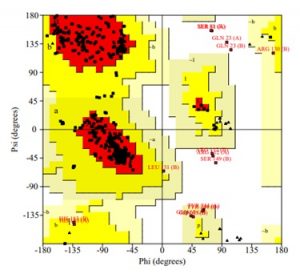 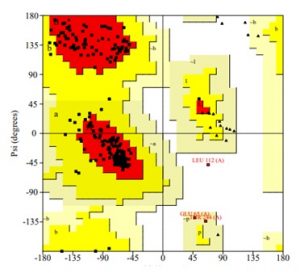 TABLE 1: PERCENTAGE OF AMINO ACIDS IN DIFFERENT REGIONS OF RAMACHANDRAN PLOTS OF L-GLUTAMINASE AND TEMPLATE MODELS 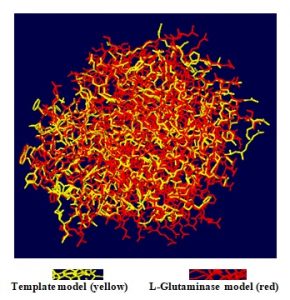 ACKNOWLEDGEMENT: The author expresses his thanks to Correspondent and Principal, Vivekananda Degree and PG College, Karimnagar, Telangana for their support. Author extends thanks to Administrative officer and Head, Department of Computer Science, for permitting to use the computer lab for carrying out the present work.

CONFLICTS OF INTEREST: The author declares that there are no conflicts of interest.