IN-SILICO TOOLS IN THE PREDICTION OF COUMARIN SCHIFF BASES AS POTENTIALLY ACTIVE COMPOUNDS: A COMPARATIVE STUDY

IN-SILICO TOOLS IN THE PREDICTION OF COUMARIN SCHIFF BASES AS POTENTIALLY ACTIVE COMPOUNDS: A COMPARATIVE STUDY

INTRODUCTION: Coumarins are phenolic substances made of fused benzene and α-pyrrone rings and are an important class of oxygen heterocycles. The name was derived from a french word “Coumarou” which was first isolated in 1820 by Vogel 1 from the fruit of Dipteryxodorata Wild (Tonka been). In the year 1868 Perkin first prepared coumarin, which is now known as the classical synthetic method bearing his name 2. There are four main coumarin subtypes they are simple coumarins, furanocoumarins, pyrano-coumarins and the pyrone-substituted coumarins. The simple coumarins are the hydroxy, alkoxy and alkyl derivatives of the parent compound.

Furanocoumarins carries with it a five membered organic compound ring connected to the coumarin nucleus, divided into linear or angular types with substitution at one or both of the remaining benzoid positions pyranocoumarin members are analogous to the furanocoumarins, however contain a 6-membered ring.

Many compounds containing coumarin moiety exhibit useful and diverse biological activity and in recent years, there has been a growing interest in their synthesis 3, 4. Some of the coumarin derivatives have been found to be useful as dyes, CNS-stimulant, antibacterial 5, 6, anticoagulants 7, 8, 9 and in photochemotherapy, antitumor and anti-HIV therapy 10, 11. In addition, coumarins are known to be lipid lowering agents with moderate triglyceride lowering activity 12. Coumarins are widely distributed throughout the plant kingdom, with the vast majority carrying an oxygen substituent at the C-7 position. 7-Hydroxycoumarin (umbelliferone) is often regarded as the parent (in a structural and biogenetic sense) of numerous structurally more complex coumarins. Coumarins occur as secondary metabolites in the seeds, roots,and leaves of many plant species such as coumarin along with its various derivatives occurs abundantly in plant kingdom such as umbelliferae, rutaceae, leguminaceae, otchidaceae, asteraceae, gutti-ferae, melastomaceae, thymelaceae and solan-aceae; their function is far from clear, although suggestions include plant growth regulators, fungistats and  bacteriostats.

Synthetic coumarins are widely used as aroma chemicals because of their odour strength, tenacity, stability to alkali and relatively cheap price; applications include use as a sweetener and fixative (in perfume); fragrance enhancers (for natural essential oils); blenders (in soaps and detergents); aroma enhancers (in tobacco); and for imparting pleasant odours to industrial products.

It was also used to assess a compounds drug likeness partially based on topological descriptors, properties as cLogP and molecular weights. Online chemical modeling used to predict the inhibition of the compounds against CYPP450 and its isotypes CYP1A2, CYP2A6, CYP2B6, CYP2C8, CYP2C9, CYP2C19, CYP2D6, CYP2E1 and CYP3A4. Swiss ADME was used to develop BOILED-Egg model, an intuitive graphical classification model. The knowledge about compounds being substrate or non-substrate of the permeability glycoprotein (Pg-P) plays an important to estimate active efflux through biological membranes. BOILED-Egg was used to predict gastrointestinal absorption and brain penetration of molecules.

Selection of Coumarin Derivatives: In this study, 28 coumarin derivatives divided into two subclasses of 14 each i.e., coumarin Schiff bases and coumarin sulphonamides were selected mostly based on functional groups attached to substituted aromatic ring. These compounds were reported and characterised in our earlier studies 13, 14, 15. The structures of selected coumarin derivatives were represented in Table 1.

TABLE 1: COMPOUNDS SELECTED FOR THE STUDY

Softwares used for the Study:

Offline Downloaded Software: DataWarrior developed at Actelion Pharmaceuticals Ltd.  It was specialized in data visualization and analysis tool for chemical and biological data. After the software was downloaded, window of data warrior opens and analysis of data was carried as follows: From the File menu, Open was selected and the dialog window to import the selected SD-file(s) (the file extension is.sdf).  The entire content of the SD-File was read by data warrior and data was displayed as rows in the table view, where defaults 2D- and 3D-views were developed. Structure view was created which generates a structure index with fragment descriptor needed internally for some structure related tasks. Various tasks such as toxicity predictions, construction of 3D views etc were calculated 17.

An Online Tool: OCHEM predictor tool was run by choosing the "Models > Open Predictor" menu item. The model was selected, which would likely be applied in the upper part of the predictor screen. Then, the molecules were selected to apply the predictions required. There was a choice between uploading the structures as SDF file or by providing a name or CAS number or SMILES.

The name and CAS number were also used to search for molecule structures in PubChem. The steps involved were drawing a molecule in sketcher, selecting a previously prepared dataset, selecting all molecules marked by a specific target, once ready, proceeded by clicking the "Run predictions!" button. When the prediction process was finished, redirected to the predictions browser in which the results were displayed 18.

Swiss ADME: Swiss ADME was developed and maintained by the Molecular Modelling Group of the SIB (Swiss Institute of Bioinformatics). A chemical structure were drawn in the main field of the sketcher, when the structure is ready, the double-arrow was popped and then the structure is converted to smiles. Multiple number of smiles can be listed. When the list of input is ready for submission the run button was clicked. All outputs were loaded in the same page as the input. The Graphical outputs include the molecules submitted, which enhanced BOILED-Egg plot to estimate the gastrointestinal absorption and brain penetration 19, 20.

Molinspiration Cheminformatics: To assess the potential biological application of the two subclasses of coumarin derivatives across various therapeutic targets 16. Chemical entities with bioactive scoreless than -0.50 are considered as less active whereas scores higher than 0.00 exhibit signiﬁcant biological potentiality. Scores that fall in the range of -0.50 to 0.00 can be taken as reasonably active. Coumarin Schiff base i.e. compound 22 with N-phenylacetamide substituent is potentially active against GPCR ligands, nuclear receptor, protease and enzyme inhibitor.

Drug likeness, a qualitative concept used in drug design for how “drug like” a substance is with respect to bioavailability usually given a score based on Lipinski rule of five concepts.

All the compounds are non-mutagenic except compound 14 which is highly mutagenic. Compounds 1, 5, 13, 14, 20 are highly tumorigenic, compound 23 exhibits low tumorigenicity Fig. 9.

OCHEM: The cytochromes P450 (CYPs) constitute the major enzyme family capable of catalysing the oxidative biotransformation of most drugs, lipophilic xenobiotics and are responsible for the biotransformation of most foreign substances including 70–80% of all drugs in clinical use. OCHEM predicts the ability of a chemical entity as an inhibitor or non-inhibitor of CYP450 sub types (CYP3A4, CYP2D6, CYP2C19, CYP2C9, CYP1A2). The results were depicted in Fig. 11-12 among the two subclasses of coumarins, coumarin sulphonamides are mostly non-inhibitors of CYP450 sub types while the coumarin Schiff bases mostly inhibit the CYP450 sub types.

Swiss ADME: Human intestinal absorption (HIA) and brain permeability are two such important pharmacokinetic parameters that contribute in the cell permeability and bioavailability to a substantial extent. In order to predict the HIA and brain permeability, we constructed a (Brain or Intestinal Estimated permeation) BOILED-Egg model using the online Swiss ADMET software tool 20. The submission of SMILE notations as input in the Swiss-ADME tool, resulted in the generation of BOILED-Egg model with WLogp vs. TPSA on xandy axis respectively Fig. 13.

Molecules that fall in the white eclipse region represent gastro-intestinal absorption where as the yellow region depicts the Blood–Brain Barrier (BBB) permeation.

The insights drawn from these theoretical studies would be harnessed to further improve their pharmacokinetic properties. 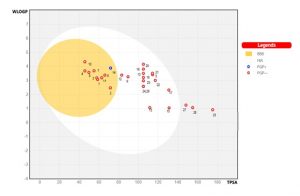 ACKNOWLEDGEMENT: The authors are thankful to the Siddhartha Academy of General and Technical Education and KVSR Siddhartha College of Pharmaceutical Sciences for providing necessary facilities to carry out this research work.