INTRODUCTION:The liver plays a central role in transforming and clearing chemicals and is susceptible to the toxicity from these agents. Certain medicinal agents when taken in overdoses and sometimes even when introduced within therapeutic ranges may injure the organ.

Other chemical agents such as those used in laboratories and industries, natural chemicals (e.g. microcystins) and herbal remedies can also induce hepatotoxicity. In India, rural and tribal people use a varied range of plants of different genus as folk medicines for health problems related to liver 1.

In India about 20,000 deaths are found every year due to liver disorder. Hepatocellular carcinoma is one of the ten most common tumors in the world and the third leading cause of cancer-related death 2. Oroxylum indicum Vent. (OI) (Family: Bignoniaceae; locally known as Tatelo), a small to medium sized deciduous tree, up to 12 m in height, branched at top, bark light brown, soft and often with numerous corky lenticels, widely found throughout the Asian sub-continent including India 3. Oroxylum indicum have been used as a single drug or as a component of certain poly-herbal drug preparations in Indian Ayurvedic system of medicine. It is active ingredient of well-known Ayurvedic formulations like Chyavanprash, Dashmularista etc 4.

In view of excellent pharmacological activities and ethnomedicinal claim, it was decided to evaluate the anti-hepatotoxic activity of extract of whole plant on carbon tetrachloride-induced chronic liver damage in rats and the obtained results are presented here in.

Animals: Healthy albino male rats of Wistar strain weighing between 150-200 g and Swiss albino mice weighing between 20-25 g (obtained from K.V. Virani Institute of Pharmacy and Research Centre, Badhada, Savarkundla, Gujarat, India) were used in the hepatoprotective activity study and oral acute toxicity study respectively. The animals were kept under standard laboratory condition (12 ± 1 h, day-night Schedule; temperature maintained at 25 ± 2oC; housed in large spacious hygienic cages with access to food and water ad libitum). The Institutional Animal Ethics Committee approved the experimental protocol and the condition in the animal house was approved by Committee for the Purpose of Control and Supervision on Experiments on Animals (CPCSEA), vide registration no.: 1210/PO/ac/08/CPCSEA.

Plant Materials: Fresh OI whole plant was collected in the month of September from Satkosia Forest (Dhenkanal, Odisha, India). Plant materials were identified at Regional Research Laboratory (Institute of Mineral and Material Technology, Bhubaneswar, Orissa, India) and a voucher specimen of OI (Voucher No.: 12500/ RRL (B)) was deposited therewith. After authentication fresh plant materials were collected, washed under running tap water, shade dried and pulverized in a mechanical grinder to get coarse plant materials.

Preparation of Plant extracts and Test doses: Pulverized plant materials were extracted 13 separately at 60oC taking methanol-dichloromethane (MDM) 14 (1:1) as solvent over 24 h and extract was collected by removing excess solvent with the help of rotary evaporator (Heidolph Labrota-4000 Efficient) and preserved in air tight containers (yield: 15.87 %). Calculated amount of extract was suspended in 0.5% (v/v) of CMC to prepare the test doses.

Oral Acute Toxicity study: Oral acute toxicity study 15 of the extract was carried out on albino mice at a dose range of 100 – 4000 mg/kg of body weight and LD50was calculated.

In-vitro Hepatoprotective activity: For in-vitro hepatoprotective activity studies, rat liver was extracted and explant cultures were done by growing rat hepatocytes in Dulbeccos Modified Eagle’s Medium (DMEM) with 5 % of new born calf serum (NBCS) 16. The culture was maintained for 48 h prior to the experiment as per standard procedure 17. Total 6 culture sets were taken for the study each set comprising six replicates (36 wells). The different experimental conditions for each culture sets are as follows, Normal: pure culture; Toxic: CCl4 (83.3 µl/ml) was added to each plate; Standard: CCl4 (83.3 µl/ml) + Silymarin (0.5 ml; 1.9 mg/ml) was added to each plate; Test sets: CCl4 (83.3 µl/ml) + OI extract was added in an increasing order of concentration (0.825, 1.65 and 3.3 mg/ml) for each group. After the said treatments culture plates were incubated for an additional 2 h time period. Following the incubation, the explant supernatant from all culture sets were collected for the evaluation of various hepatic marker enzymes like GOT, GPT and ALP.

The treatment duration was of 8 weeks 16 and the test animals were sacrificed 24 h after the last dosing at the end of 8th week. Rats were anaesthetized with Phenobarbitone sodium (40 mg/kg; i.p) before sacrificing and blood sample from each test animal was collected by cardiac puncture. The serum prepared from the collected blood samples were subjected to biochemical investigation of different parameters in serum including glutamate oxaloacetate transaminase (GOT), glutamate pyruvate transaminase (GPT) and alkaline phosphatase (ALP), bilirubin (total and direct), albumin and total protein. The liver was dissected out immediately after sacrifice, washed in cold saline. Small pieces of liver tissue were collected and preserved in 10% formalin solution for histopathological studies.

Statistical analysis: The results obtained in biochemical assays were given in terms of mean ± SEM. The statistical significance of the data was assessed by one way analysis of variance (ANOVA) followed by Tukey-Kramer multiple comparison test between different groups. Toxic, Standard and Test groups were compared with normal group. Standard and all Test groups were compared with the toxic group. p<0.05 was considered as statistically significant.

It is a known fact that, CCl4 is a potent hepato-toxin which produces free radicals to induce oxidative stress and lipid peroxidation in hepatic cells and consequently promotes acute liver damage 19. 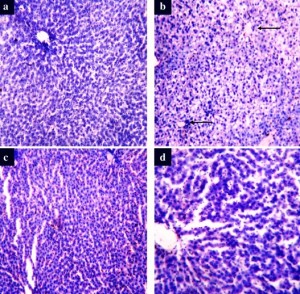 The previous reported findings evidenced the presence of many active phytochemicals including flavonoids, triterpinoids and sterols with potential hepatic restoration capacity 23 which may be the reason behind anti-hepatotoxicity potential of the plant.