INTRODUCTION: Microparticles are a type of drug delivery systems where the particle size ranges from one micron to few mm. These microparticles allow protection of drug from the environment, stabilization of sensitive drug substances, elimination of incompatibilities, or masking of unpleasant taste.

Hence, they play an important role as drug delivery systems aiming at improved bioavailability of conventional drugs and minimizing side effects1

Glimepiride is an oral blood sugar-lowering drug as a third generation Sulfonylurea for the management of type-II diabetes mellitus. It is absorbed at the gastrointestinal tract. Due to its low biological half lives (5 hrs), it requires frequent administration. To reduce the dosing frequency and to improve patient compliance prolonged release dosage forms are required 2.  Hence, there is a scope for continued interest and need for developing controlled release formulations.

Animals: New Zealand male rabbits (1.2 - 1.8 kg) maintained at 25 ± 1°C was used for the study after getting the approval from Institutional Animal Ethical Committee. The animals were housed in stainless steel metabolic cages and provided standard diet and water ad libitum.

All the microparticles formulations were prepared by emulsion solvent evaporation technique3. 1gm of Glimepiride and polymer (cellulose acetate) in 1:3 ratio were dissolved in 10ml of acetone. The organic solution was then slowly added to 100ml of liquid paraffin containing 1% of span 80 as surfactant with constant stirring for 1hr. The resulting microparticles were separated by filtration and washed with petroleum ether. The microparticles finally air dried over a period of 12 hrs and stored in a desiccator.

The pharmacokinetic performance of Glimepiride microparticles was studied in a randomized crossover study design in rabbits. Twelve healthy rabbits with a mean age of 10±2 weeks and with a mean body weight of 3±0.2 kg were used. Two groups of rabbits with 6 in each were fasted for 12 hrs prior to study. The animal dose of pure Glimepiride and its microparticles was calculated relevant to human dose. A dose of 180 μg/kg of pure Glimepiride and 115 μg/kg Glimepiride equivalent microparticles were administered orally in the form of suspension for two groups of rabbits. The rabbits were restrained in a wooden rabbit holder. The ears of the rabbits were cleaned and the hair was removed with the help of depilatory. Before withdrawal, the ear veins were dilated by swabbing with cotton or by application of warm water. The marginal ear vein of the left ear was punctured with a help of a 24 gauge needle. About 1 ml of blood samples were drawn at 0 (before drug administration),  0.5, 1.0, 2.0, 3.0, 4.0 and 6.0 hrs after pure drug  administration and  at 0, 1, 2, 4, 6, 8, 12, 16, 20, and 24 hrs after administration of Glimepiride microparticles4.

Blood sample volume was replaced by administration of isotonic saline. The blood samples were collected in a micro centrifuge tube and centrifuged at 3500 rpm for 10 min. Later the supernatant layer (serum layer) was collected and utilized for estimation of Glimepiride concentration. The estimation of Glimepiride in serum was carried out by HPLC method5. The pharmacokinetic parameters of Glimepiride such as Ke (hr-1), t1/2 (hr), Ka (hr-1), AUC (0-α) (µg-hr/ml), MRT (hr), Cmax (µg/ml), Tmax (hr) were estimated by non-compartmental methods 6.

Hypoglycemic effect of Glimepiride microparticles were performed on normal healthy wistar rats weighing 250 to 300 g each. The rats were maintained at normal photo period (12 hour dark/12 hour light) with an ambient temperature of 23-26ºC under adequate light and ventilation. Commercial pellet diet and water were provided to the Rats.  The approval of the Institutional Animal Ethics Committee was obtained before starting of the study. Two groups of Wistar rats (6 in each group) were fasted with water for 12 hours. Before drug administration, a blood sample as a control was taken for each rat from behind the eyeball through the angle of ocular cavity using small capillary tubes.

Pure Glimepiride and Glimepiride microparticles were administered orally to each group using stomach intubations. A dose of 180 μg/kg of Glimepiride was administered in suspension form for each rat. The blood glucose level for the control and test sample was determined using the glucose measuring instrument7. Blood samples were collected using the retro orbital puncture method at predetermined time at 1 hour interval up to 12 hour collected. The percentage reduction in blood glucose level was measured. The hypoglycemic activity of Glimepiride at anytime (t) in rats was calculated as the percent blood glucose change at that time with respect to initial blood glucose according to the formula given below 8.

The microparticles were subjected to In-vitro release studies by employing 7.8 pH phosphate buffer as dissolution medium. The rate of drug release from these microparticles followed zero order kinetics and the mechanism of drug release was governed by peppas mechanism. The in vivo performance of pure drug and optimized Glimepiride microparticles were evaluated in rabbits in a randomized cross-over design. High-performance liquid chromatographic (RP-HPLC) method was developed for determination of Glimepiride in rabbit serum. Typical chromatogram of Glimepiride in serum was given in Fig.1. 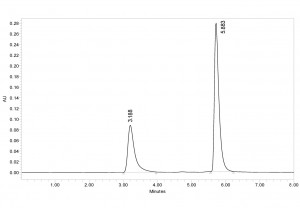 Serum Glimepiride concentrations at different times after pure drug administration and optimized microparticles administration were calculated and are shown in Fig.2. 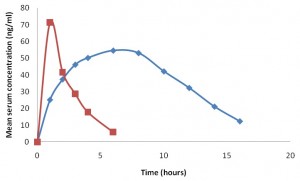 Statistical Treatment of Pharmacokinetic Parameters of Glimepiride obtained with pure drug and optimized microparticles were calculated and are shown in Table 1.

Null hypothesis (Ho): There is no significant difference between the pharmacokinetic parameters of Glimepiride obtained with pure drug and optimized microparticles. Table value of  ‘t’ with 10 DF at the 0.001 level is 4.587. 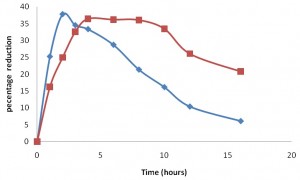 CONCLUSION: The Glimepiride microparticles were successfully prepared by Emulsion Solvent Evaporation method by using Cellulose Acetate as a release rate retardant. Drug release from the microparticles followed zero order kinetics and controlled by peppas mechanism. The in vivo pharmacokinetic studies revealed that the optimized microparticles exhibited controlled release and absorption kinetics over longer periods of time which in turn maintained the desired serum concentrations over longer period of 12 hours.