ABSTRACT: The study was carried out to evaluate anti-inflammatory activity of alcoholic extract of roots of Lawsonia Inermis (LILAC). In-vitro anti-inflammatory activity was evaluated by Cyclooxygenase inhibitory assay wherein the LIALC showed a dose-dependent inhibition of both the enzymes with IC50 values of 58.2 μg/ml for COX-1 and 7.38 μg/ml for COX-2. In RBC membrane stabilization activity, LILAC at the concentration of 100 µg/ml and 200µg/ml exhibited membrane stabilizing activity. Acute oral toxicity of extract was determined by OECD 423 guidelines wherein mortality was not observed when the extract was administered orally up to 2000 mg/kg. Carrageenan-induced paw edema model evaluated in-vivo anti-inflammatory activity; Paw edema was induced by injecting 0.1 ml of 1% w/v carrageenan into the subplantar tissues of the left hind paw of each rat. LILAC at all the three doses, 200, 300 and 400 mg/kg, showed maximum inhibition of 31.8, 40.9 and 50.8% respectively at 180 min. In Cotton pellet-induced granuloma model, Sterile, weighed, cotton pellets (10 ± 1 mg) were implanted subcutaneously in the groin regions of the rats under light anesthesia, the dry weight of cotton pellet was significantly reduced by 36.4, 46.4 and 50.5% at 200, 300 and 400 mg/kg of LILAC respectively. The research findings substantiate the promising anti-inflammatory activity of alcoholic extract of roots of Lawsonia Inermis in all the tested in-vitro and in-vivo models.

Hence, the discovery of new anti-inflammatory drugs from natural sources with lower and fewer side effects is demanding 1. Inflammation is an adaptive response of body tissues to external challenge or cellular injury. It is generally thought that inflammation is a beneficial host response defense system, but it can become harmful if dysregulated 2.

Cyclooxygenase also abbreviated as COX is a prostaglandin-endoperoxide synthase enzyme involved in the metabolism of arachidonic acid (AA) and synthesis of prostanoid including potent proinflammatory prostaglandins (PGE2, PGF2a). In mammalian cells, COX exists in at least two isoforms COX-1 and COX-2. COX-1 is expressed constitutively in almost all cell types, including platelets and those present in stomach, kidney, vascular endothelium, forebrain and uterine epithelium and is regulated as a house keeping enzyme for various physiological functions, whereas COX-2 is inducible and expressed during tissue damage or inflammation in response to proinflammatory cytokines such as IL-1b, interferon gamma, and TNF-a. A crucial proinflammatory role played by the COX has made this enzyme an attractive target for the development of novel anti-inflammatory agents 3.

According to WHO, approximately 70-80% population of developing countries acquire their primary pharmaceutical care from medicinal plants 4. Medicinal plants have been used for centuries to treat many diseases, and contain bioactive compounds with potentially curative effects. They maintain the health and vitality of individuals and also cure diseases, including inflammation without causing toxicity 5. Several plants like Cassia fistula, Phyllanthus emblic, Lantana camera, and plant products like Curcumin, Bromelain, Epigallocatechin-3 have been reported for their potent anti-inflammatory activity 6. In this context, the present study was designed to evaluate the anti-inflammatory activity of roots of Lawsonia Inermis.

Collection and Preparation of Extracts: The plant material (Roots of Lawsonia inermis) was collected from Sri Rangapatnam taluk of Mysuru district, Karnataka, India. The plant was authenticated by Dr. M. N. Naganandani, Assistant Professor, Department of Pharmacognosy, JSS College of Pharmacy Mysuru (voucher specimen no. LI P.COL1).The roots were shade dried for 20 days and then powdered. The Soxhlet extraction method was used for extraction using 90% alcohol as the solvent. The extract so obtained was thick and syrupy with a characteristic odor. The further extract was filtered, concentrated using rotary flash evaporator and dried under vacuum.

The mixture was pre‐incubated at 25 °C for 15 min, and then the reaction was initiated by the addition of arachidonic acid and TMPD, in a total volume of 1 ml. The enzyme activity was determined by estimating the velocity of TMPD oxidation for the first 25 seconds of the reaction by following the increase in absorbance at 603 nm. A low rate of non‐enzymatic oxidation observed in the absence of COX‐1 and COX‐2 was subtracted from the experimental value while calculating the percent inhibition

Preparation of Erythrocyte Suspension: Blood was withdrawn from anesthetized rats from retro-orbital puncture and collected into the heparinized tubes. The blood was washed three times with 0.9% saline. The volume of saline was measured and reconstituted as a 40% (v/v) suspension with isotonic buffer solution (pH 7.4) which contained in 11 ml of distilled water: NaH2PO4·2H2O, 0.26 g; Na2HPO4, 1.15 g; NaCl, 9 g (10 mM sodium phosphate buffer).

Heat-Induced Haemolysis: Isotonic buffer (5 ml) containing 50, 100, 200 µg/ml of LIALC or vehicle was added to centrifuge tubes. Erythrocyte suspension (30 μl) was added to each tube to make a reaction mixture and mixed gently by inversion. One pair of the tubes were incubated at 54 °C for 20 min in a water bath. The other pair was maintained at 0 - 5 °C in an ice bath. The reaction mixture was centrifuged for 3 min at 1300 rpm, and the absorbance (O.D.) of the supernatant was measured at 540 nm using UV spectrophotometer. Diclofenac (50 μg/ml) was used as a reference standard.

Animals: Albino Wistar rats of either sex weighing 150-200 g were used for the experiments. They were procured from a registered breeder. The animal care and handling were carried out in accordance to guidelines issued by the Institutional Animal Ethics Committee, JSS College of Pharmacy, Mysore, Karnataka. Animals were acclimatized to the experimental room for one week before the experiment. Animals were maintained under controlled conditions of temperature (25 ± 1 ºC) and humidity (35 - 50%). The rats were fed on standard food pellets and water ad libitum. The studies conducted were approved by the Institutional Animal Ethics Committee (approval no. 050/2010) JSS College of Pharmacy, Mysuru.

Selection of Test Dose and Preparation of Test Samples: Acute oral toxicity of extract was determined by OECD 423 guidelines. In acute oral toxicity study, no animal mortality was observed when the extract was administered orally with 2000 mg/kg. So in the present study, LIALC was tested at a dose range of 50, 100, 200, 300 and 400 mg/kg body weight. The selected dose of standard diclofenac was 5 mg/kg based on previous reports 9. LILAC and the Standard drug (Diclofenac) were administered orally in the form of suspension. Suspension was prepared in 0.25% w/v Carboxymethyl cellulose (CMC). Suspension of the test and standard was freshly prepared just before the administration.

The extracts were administered orally 30 min before carrageenan administration. The paw volume was measured at intervals of 60, 120, 180 and 240 min by the mercury displacement method using a Plethysmograph. Percentage inhibition of edema was calculated by the following formula.

Where, Vc and Vt represent an increase in paw volume in control and drug-treated animals respectively.

Where Dc and Dt represent the weight of the dry pellet in control and drug-treated group respectively.

Cox Inhibitory Assay: LILAC was tested against COX‐1 and COX‐2 by TMPD assay. LILAC showed dose-dependent inhibition of both the enzymes with IC50 values of 58.2 μg/ml for COX‐1 and 7.38 μg/ml for COX‐2. These results indicate that LIALC has more specificity towards COX‐2 than COX‐1. 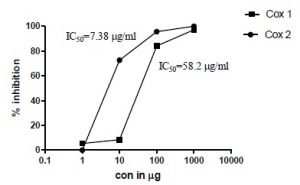 All values are expressed as Mean ± SEM; Experiments performed in Triplicates, a p<0.05 compared to control, b p<0.05 compared to standard. All data were analyzed by one way ANOVA followed by post hoc Tukey’s multiple comparison tests.

Cotton Pellet-Induced Granuloma: In this model LILAC and diclofenac significantly (p<0.05) reduced the dry weights of cotton pellet, an index of granuloma formation. The percentage inhibition of granuloma formation by diclofenac was 61.6%. A significant reduction in the dry weight of cotton pellet was observed at all the tested doses of LILAC. The percentage inhibition was 36.4, 46.4 and 50.5% for 200, 300 and 400 mg/kg of LILAC respectively. The efficacy of LIALC at 400 mg/kg was comparable to that of standard Diclofenac.

DISCUSSION: In the present study anti-inflammatory activity of LIALC was assessed by employing in-vitro models like COX inhibitory assay, membrane stabilizing activity and in-vivo models such as carrageenan-induced paw edema, cotton pellet-induced granuloma. Anti-inflammatory activity of most of the plants is attributed to their action on multiple pathways of inflammation. So, to partially support the mechanism of action of LILAC in-vitro studies such as COX inhibitory assay and membrane stabilizing activity was carried out.

COX is a membrane-bound enzyme responsible for the oxidation (cyclooxygenase activity) of arachidonic acid to prostaglandin G2 (PGG2) and the subsequent reduction (Peroxidase activity) of PGG2 to prostaglandin H2 (PGH2) which serves as mediators of inflammation. COX has been shown to be expressed in at least two different isoforms, a constitutively expressed form COX-1, and an inducible form, COX-2 12. LILAC showed inhibition of both isoforms of COX, i.e. COX-2 and COX-1 with an IC50 of 7.38 µg/ml and 58.2 µg/ml respectively. The IC50 of LIALC for COX-2 enzyme was 8 fold less than the IC50 of LIALC on COX-1. Since LIALC has shown selective inhibition of COX-2, it might be devoid of various adverse effects associated with conventional anti-inflammatory drugs.

Membrane stabilizing activity is known to be a biochemical index of anti-inflammatory activity. The vitality of cells depends on the integrity of their membranes 13. Exposure of red blood cell to injurious substances such as hypotonic medium or heat results in lysis of its membrane accompanied by hemolysis and oxidation of hemoglobin. Also, the erythrocyte membrane is analogous to the lysosomal membrane, and its stabilization implies that the extract may as well stabilize lysosomal membranes.

Stabilization of lysosomal membrane is important in limiting the inflammatory response by preventing the release of lysosomal constituents of activated neutrophil such as bactericidal enzymes and proteases, which cause further tissue inflammation and damage upon release 14. LILAC exhibited a significant membrane stabilization activity at all the tested doses.

The presence of edema is one of the prime signs of inflammation 15. It has been documented that carrageenan-induced rat paw edema is a suitable in-vivo model to predict the value of anti-inflammatory agents, which act by inhibiting the mediators of acute inflammation 16. Also, this method is frequently used to assess the anti-oedematous effect of natural products 17. Carrageenan-induced paw edema represents an inflammatory reaction in two different phases 18. The initial phase, which occurs between 0 and 2.5 h after the injection of the phlogistic agent, has been attributed to the action of mediators such as histamine, serotonin and bradykinin on vascular permeability 19. The edema volume reaches its maximum approximately at 3 h of post-treatment and then begins to decline. The late phase, which is also a complement-dependent reaction has been shown to be a result of overproduction of prostaglandins in tissues and may continue until 5 h post-carrageenan injection 19. LILAC at the dose of 200, 300 and 400 mg/kg effectively inhibited the carrageenan-induced increase in paw volume during the early phase (1-3 h after carrageenan injection) of inflammation and also a weak inhibitory effect at a later phase.

Cotton pellet method is widely used to evaluate the transudative and proliferative phases of inflammation. It involves proliferation of macro-phages, neutrophils, and fibroblasts, which are basic sources of granuloma formation 20. The wet weight of the cotton pellets correlates with transude whereas the dry weight of the pellets correlates with the amount of the granulomatous tissue. Hence, the decrease in the weight of granuloma indicates the ability of the LILAC in reducing the synthesis of proteins, collagen and macrophages infiltration. Administration of LILAC markedly inhibited the granuloma formation as evident by the decrease in dry weight of the cotton pellet. LILAC significantly inhibited the granuloma formation at all the tested doses. The efficacy of LIALC at the dose of 400 mg/kg was comparable to that of standard diclofenac.

However, further studies are warranted to establish the mechanism of LIALC responsible for its anti-inflammatory effect along with evaluation of LILAC against chronic inflammatory disorders.

ACKNOWLEDGEMENT: The authors are thankful to the Principal, JSS College of Pharmacy, Mysuru, Karnataka, and Department of Animal Sciences, University of Hyderabad, Hyderabad, India for providing the necessary facilities to carry out the study.