ABSTRACT: Asthma isa disease of the human respiratory system. The ethanolic extract of the roots of Picrorhiza kurroa was evaluated for antiasthmatic activity by using in-vivo and in-vitro model in guinea pigs. Animal studies used the histamine induced broncho-constriction in guinea pigs. The extract showed a maximum degree of protection of 52.16 % which was comparable to that of salbutamol 65.83 %. The effect of the ethanolic extract of the plant on isolated guinea pig ileum was studies to know the mechanism by which the extract exhibited muscle relaxant activity. The study showed the extract is effective against histamine and acetylcholine induced contraction. The extract exhibited relaxation effect against histamine and acetylcholine induced contraction at a concentration of 100 mg/ml. The result revealed that the ethanolic extract produced antiasthmatic activity due to presence of saponins and flavonoids

INTRODUCTION:Asthma is a disease of the human respiratory system in which the airways constrict and become narrow, often in response to a “trigger” such as exposure to an allergen, cold, air, exercise or emotional stress. Asthma affects 7% of the total population and approximately 300 million worldwide. During attacks (exacerbations), the smooth muscle cells in the bronchi constrict and the airway become inflamed and swollen with difficulty in breathing 1. It has been estimated that about 7000 articles are published every year about asthma in various journals 2. As a result there is high prevalence of usage of complementary and alternative medicines for treatment of the disease

Ayurveda, an ancient system of Indian medicine, has recommended a number of drugs from indigenous plant sources for the treatment of bronchial asthma and allergic disorders3. Picrorhiza kurroa is a small perennial herb from the Scrophulariaceae family, found in the Himalayan region growing at elevations of 3000-5000 meters. It has a long, creeping rootstock that is bitter in taste and grows in rock crevics and moist, sandy oil. The active constituents are obtained from the root and rhizomes.

Current research on Picrorhiza kurroa has focused on its hepatoprotective, anticholestatic, antioxidant and immune modulating activity 4. Kutkin is the active principal of Picrorhiza kurroa and is combination of kutkoside and the inidoid glycoside picrosides I, II and III. Other active constituents are apocynin, drosin and nine curcurbitacin glycosides 5. Many tribal peoples and Ayurvedic practitioners prescribed roots of Picrorhiza kurroa for the treatment of asthma.

In the present study we have investigated the antiasthmatic activity of ethanolic extract of roots of P. kurroa in experimental animals by using in-vivo and in-vitro models.

Plant Material: Dried roots and rhizomes of P. kurroa were purchased from commercial supplier of Delhi, India. The plant was authenticated by Head of Department, Botany, Mody Institute of Technology, Mody University, Lachhmangarh, Rajasthan, India, where a plant specimen was deposited under the no. MIT/DOB/11-12/430.

Preparation of Extract: The roots of P. kurroa were subjected to shed drying and further crushed to powder and then the powder was passed through the mesh 40. The dried and ground plant material (1.0 kg) was successively extracted with ethanol and water for 72 h each. The extract was concentrated to dryness under reduced pressure. The obtained extracts were stored in a refrigerator at 4ºC until use.

Experimental procedure: Guinea pigs (500-600 g) of sex housed in standard conditions of temperature (20± 2ºC), relative humidity (55± 5%) and light (12hrs light/ dark cycles) were used. They were fed with standard pellet diet and water ad libitum. The experimental protocol was approved by IAEC as per guidance of CPCSEA, India.

Acute Toxicity studies: Albino rats of either sex weighing 150-200 gm were used in the study. Acute oral toxicity study was performed as per organization for economic co-operation and development (OECD) 425 guideline.

Percentage increase in time of PCT=

After obtaining a dose response curve of histamine on the ileum, the dose which gave the highest response was selected and was repeated with graded doses of the P. Kurrora of different concentrations (1 mg/ml, 10 mg/ml and 100 mg/ml) to determine if the extract could inhibit the highest response of histamine. This was done until the dose which gave complete inhibition of histamine response i. e. relaxation of the contraction induced by the histamine was observed as shown in Figure 1. A positive control experiment was conducted using 1 mg/ml mepyramine.

The results are presented in Figure 2. A positive control experiment was performed using atropine. 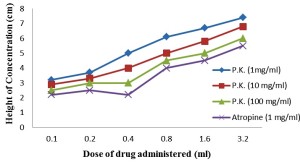 Statistical Analysis: The results of various studies were expressed as mean ± SEM and analyzed statistically in using one way ANOVA followed by Student’s t-Test to find out the level of significance. Data were considered statistically significant at minimum level of p < 0.05.

RESULTS AND DISCUSSION: No mortality and the sign of toxicity were observed at the dose of 500 mg/kg. Dose selected for pharmacological evaluation were 25 mg/kg. Ethanolic extract of P. kurroa significantly and dose dependently increased the time of PCT following exposure to histamine (p< 0.01) and acetylcholine (p< 0.05) aerosols induced bronchospasm in guinea pigs as shown in (Table 1). Increased in the time of PCT was more against histamine aerosol as compared to acetylcholine aerosol following administration of P. kurroa extract.

Histamine induced broncho-constriction is the traditional immunological model of antigen induced airway obstruction. Histamine when inhaled causes hypoxia and leads to convulsion in the guinea pigs and causes very strong smooth muscle contraction, profound hypotension, and capillary dilation in the cardiovascular system. A prominent effect caused by histamine is severe bronchoconstriction in the guinea pigs that causes asphyxia and death 9. Bronchodilators can delay the occurrence of these symptoms. Salbutamol is a well-known β-2-receptor agonist with bronchodilator activity and is routinely used in the management of conditions of broncho-constriction as occurs in asthma 10. The result suggests that P. kurroa root extract may have bronchodilator activity.

Different agonists such as histamine and acetylcholine are known for their ability to induce contraction in some tissues including the guinea pig ileum. In the isolated guinea pig ileum, there are histaminic and cholinergic receptors. Hence, a decrease or inhibition of the contractions induced by histamine and acetylcholine in the presence of the root extract of Picrorhiza kurroa, as shown in Figure 1 and 2, is suggestive of possible anti-histaminic or anti-cholinergic activity.

The guinea pig ileum was used for screening of antiasthmatic and anti-cholinergic activities. This is because the presence of histamine H1 sensitive excitatory receptors and acetylcholine muscarinic receptors in the airway smooth muscle of man and animals have been established 11.

The stimulation of H1 receptors produced graded dose related contractions, and from the result, it was observed that the extract of P. kurroa (25 mg/ml) significantly inhibited the histamine induced contractions on the guinea pig ileum preparation (Figure 1) indicating its H1 receptor antagonistic activity and supports the bronchodilator properties of the plant.

CONCLUSION: From the result obtained, it can be deducted that the ethanolic root extract of Picrorhiza kurroa has antiasthmatic activity and have beneficial effect in asthma.

ACKNOWLEDGEMENT: The authors sincerely thank to the management of Goenka College of Pharmacy, Lachhmangarh, India for providing the necessary space and facilities to carry out the study.

8         Kortoh-Mortty RK, Ansah-Asamoah; Some Pharmacological effects of Desmodium adscends on the contracted trachea in vitro and in vivo and spontaneous beating right atrium of the guinea pig, Journal of Science and Technology, 1995,15: 60- 63.

13      Hazekamp A, Verpoorte R, Panthong A; Isolation of bronchodilator flavanoids from the Thia medicinal plant Clerotendrum petasites. Journal of Ethnopharmacology, 2001, 78, 45-49.