INTRODUCTION: Helminth contaminations are among the most widespread infections in humans. According to WHO, only a few drugs are frequently used in the treatment of helminthes infestations in human beings. Anthelmintic resistance is a noteworthy issue for the control of numerous parasitic nematode species and has turned into a noteworthy requirement to domesticated animals creation in many parts of the world.

Because of the predominance of parasitic contaminations and the created resistance of some anthelmintic medications is presently an encasing zone in the field of research 1. The family (Annonaceae) is a huge family containing around 135 genera and more than 2500 species conveyed basically in tropical and subtropical regions 2.

The genus name, ‘Annona’ is from the Latin word ‘anon’, meaning ‘yearly produce’, referring to the production of fruits of the various species in this genus. A. squamosa has been named botanically from Jamaica 3-5. Annona squamosa L. (Annonaceae), usually known as the custard apple tree is cultivated throughout India, because of its edible nature 6. The taste of the pulp of the fruit is really sweet because of its higher sugar content of about 58% of dry mass, and hence it is found clear that the fruit pulp possess a high calorie value 7. This plant was reputed to contain several medicinal properties. Synthetically, this family is described by the nearness of isoquinoline alkaloids, for the most part aporphines.

As our previous study, phytochemical investigation of the bark of Annona squamosa yields five phytoconstituents namely, three known alkaloids anonaine (AS-1) and asimilobine (AS-2), lysicamine (AS-3), together with two unknown constituent 1,2-dihydroxy-7H-dibenzo-quinolin-7-one (AS-4) and 1,2,9-trihydroxy-5,6,6a,7-tetrahydro-4H-dibenzo-quinoline (AS-5) 8. The present investigation of chemical constituents of Annona squamosa was undertaken as part of a wider study to find out the pharmacological active constituents present in this plant.  So in this study, we describe the pharmacological evaluation of previously isolated compounds (AS1-AS5) from the bark of Annona squamosa.

MATERIALS AND METHODS: The bark of plant were collected from the herbal garden of A. N. D. College of Pharmacy, Babhnan, Gonda, Uttar Pradesh, India in the month of December and identified by an expert taxonomist in Department of Taxonomy & Pharmacognosy, National Botanical Research Institute, Lucknow. The plant specimens were authenticated (Ref. No NBRI/CIF/ 413/2013). The areal part of plant was shade dried, reduced to coarse powder and stored in airtight container till further use. The extraction and isolation were carried out our previous work 8.

Animal: Healthy adult Indian earthworms Pheretima postuma, due to its anatomical and physiological resemblance with the intestinal roundworm parasites of human beings 9 - 11 were used in this study. All earthworms of approximately equal size of 5-6 cm length and 0.2 -0.3 cm widths were used. They were collected from the moist place, washed and kept in water.

In-vitro Anthelmintic Activity: All isolated compounds from Annona Squamosa (AS-1 to AS-5) plant were investigated for their anthelmintic activity against Pheretima posthuma 12. Six groups of equal size Indian earthworm consisting of six earthworms in each group were taken. Each group was treated with one of the following: vehicle (dimethyl sulfoxide [DMSO]), Albendazole (10 mg/mL) and isolated compounds (AS-1 to AS-5) (10 mg/mL) in DMSO (5.0 mL) and volume was make up to 20 mL by distilled water. Observations were made for the paralysis time and subsequently for death time of the worms.

The mean paralysis and death time for each group were recorded (each reading was taken 6 times). The time taken by the worms to become motionless, was considered as paralysis time, was recorded and the lethal time was also recorded by observing the time taken to become motionless on the application of external stimuli by pricking with pin (Table 1). Albendazole (10 mg/ml) was taken as standard drug (Fig. 1).

DPPH-Scavenging Activity: Fig. 2 illustrates a significant decrease in the concentration of DPPH radical due to scavenging ability of the isolated compounds. Ascorbic acid was used as a standard. The compounds tested with this method exhibited marked DPPH free radical scavenging activity in a concentration-dependent manner.

These results indicate that the isolated compounds from Annona squamosa (AS-1 to AS-5) plant exhibited potent antioxidant activity. It may be due to the presence of OH groups, which enhance the radical scavenging activity by hydrogen donation. The results indicate that compound AS-5 & AS-4 having IC50 65.77± 0.12 and 92.97± 0.12 µg/ml revealed potent antioxidant activity comparable to standard ascorbic acid (IC50 43.42 ± 0.22 µg /ml) as shown in Table 2. Data of percentage inhibition showed that amongst all the test compounds having hydroxyl groups as substituent showed highest activity. This may be due to the available OH group present in AS-5 & AS-4. The isolated compounds have shown good antioxidant effect, amongst all AS-5 has shown excellent activity. Rest of the compounds (AS-1 to AS-4) showed mild-to-moderate antioxidant effect. 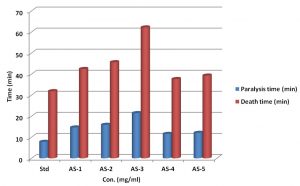 In-vitro Antioxidant Activity: DPPH method is the most tremendous, easiest and commonly used method for testing preliminary free radical-scavenging activity. DPPH is a stable free radical containing an odd electron in its structure and usually utilized for detection of the radical scavenging activity in chemical analysis. DPPH is known to abstract labile hydrogen 13 - 16. DPPH-radical scavenging activity of isolated compounds from Annona squamosa (AS-1 to AS-5) plant was measured in terms of hydrogen donating or radical-scavenging ability using the stable radical DPPH. Solution of DPPH was prepared and was added to all the isolated compounds (AS-1 to AS-5) at five concentrations (20, 40, 100, 200, 400 µg/ml). Thirty minutes later, the absorbance was deliberate at 517 nm. All the analysis was made with the use of UV-Visible Spectrophotometer (Shimadzu 1700). Absorbance of various concentrations was taken and percentage inhibition was calculated. Lower absorbance of the reaction mixture indicates higher free radical-scavenging activity.

Ascorbic acid was used as a standard antioxidant. IC50 (Inhibitory Concentration 50%) value denotes the concentration of sample required to scavenge 50% of the DPPH free radical (Table 2). IC50 of all isolated compounds was determined from % Inhibition v/s concentration graph (Fig. 2).

Statistical Analysis: The results of the experiment were expressed as mean ± SEM. For group comparison, analysis of variance followed by Tukey's HSD multiple comparison test with SPSS version 10 was used. The difference among means considered statistically significant when p-value was less than 0.05.

TABLE 2: PERCENTAGE INHIBITION OF ISOLATED COMPOUNDS (AS-1 TO AS-5) AT VARIOUS CONCENTRATIONS 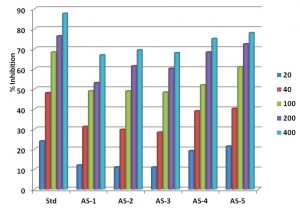 CONCLUSION: This study indicated the potential usefulness of isolated compounds from Annona squamosa bark against earthworm infections and provides a rationale for the traditional use of this plant as anthelmintic. Subsequently, in biological screening, the compounds showed potent antioxidant agent. Further research on these plants core is needed for the discovery of a potent anthelmintic and antioxidant agent. Thus we observed that there is enough scope for further study in developing such compounds as a good lead molecule with better pharmacological profile.

CONFLICT OF INTEREST: None of the author has any conflict of interest in the context of this work.

Sandeep * and A. Mittal