ABSTRACT: In the present study the anti-arthritic activity of ethanolic extracts of leaf and seed of Elaeocarpus serratus L. was evaluated in vitro using two models namely on the inhibition of protein denaturation and anti-proteinase activities. Indomethacin was used as a standard drug. Results revealed that the ethanolic leaf and seed extracts of E. serratus at two different concentrations (200 and 400 µg/ml) possessed notable activity as compared to the standard drug indomethacin, justifying its usefulness in the treatment of inflammation associated diseases like arthritis

INTRODUCTION: Natural products have played an important role throughout the world in treating and preventing human diseases 1. Medicinal plants form the strength of traditional medicine. Plant derived drugs serve as a prototype to develop more effective conventional drugs for the treatment of many forms of arthritis 2. Rheumatoid arthritis (RA) is an autoimmune disorder characterized by synovial proliferation, inflammation, subsequent destruction like deformity of joints or destruction of cartilage and bone 3, 4. Various phytochemical constituents from herbal plant showed beneficial effect in rheumatoid arthritis.

The leaves and seeds are used in the treatment of rheumatism, cancer, diuretic and as antidote to poison 5, phytochemical screening 6, antimicrobial activity 7. The study of the therapeutic basis of herbal medication, bioactive compounds of E. serratus are insufficient. Hence, the present study was undertaken to evaluate in vitro anti-arthritic activity of plant extracts.

Plant material: The leaf and seed of Elaeocarpus serratus L. were collected from Upper Palani Hills of Western Ghats (Kodaikanal Forest Division), India and were authenticated at Botanical Survey of India (BSI), Southern Circle, Coimbatore, India and the herbarium of Voucher specimen number BSI/SRC/5/23/2011-12/Tech.239 has been deposited at the PG and Research Department of Botany, Vellalar College for Women, Erode (T.N), India.

Collected leaf and seed of Elaeocarpus serratus were converted into moderately coarse powder and extracted with solvent ethanol (78.5°C) for 27 hours by soxhlet apparatus. The powdered materials were dried in a hot air oven at 40°C. The extracts were dried over anhydrous sodium sulphate and stored in sealed vials in refrigerator (5-8°C) until analysis8.

Assessment of in vitro Anti-Arthritic Activity:

The reaction mixture (0.5ml) consisted of 0.45ml bovine serum albumin (5% aqueous solution) and 0.05ml of sample extracts (200 and 400μg/ml). pH was adjusted at 6.3 using a small amount of 1N HCI. The samples were incubated at 37oC for 20minutes and then heated at 57oC for 3 minutes. After cooling the samples, 2.5ml phosphate buffer saline (pH 6.3) was added to each tube. Turbidity was measured spectrophotometrically at 660nm. For control tests 0.05ml distilled water was used instead of extracts while product control tests lacked bovine serum albumin. The percentage inhibition of protein denaturation was calculated as follows:

The reaction mixtures (2.0ml) contained 0.06 mg trypsin, 1.0ml 25mM tris-HCI buffer (pH 7.4) and 1.0ml aqueous solution of sample extract (200 and 400μg/ml). The mixtures were incubated at 37o C for 5minutes. Then 1.0 ml of 0.8% (w/v) casein was added. The mixtures were incubated for an additional 20 minutes. 2.0 ml of 70% (v/v) perchloric acid was added to terminate the reaction. The cloudy suspension was centrifuged. Absorbance of the supernatant was read at 280nm against buffer as blank. The percentage of inhibition was calculated. Indomethacin (100μg/ml) was used as standard.

RESULTS AND DISCUSSION: The effect of ethanoilc extracts of Elaeocarpus serratus leaf and seed on inhibition of protein denaturation and anti-proteinase activity are shown in Fig.1. The maximum percentage of protein denaturation was observed in the leaf extract (68.32%) followed by the seed extract (62.13%) at 400μg/ml., the results were almost nearer to the standard indomethacin which showed an inhibition percentage of 75.45% at 100µg/ml. Whereas the low doses (200μg/ml) of both the extracts gave moderate value (56.74% and 52.17% in leaf and seed respectively). From the results of the present study, it is known that the extracts are capable of controlling the denaturation of protein in inflammatory disease effectively.

The ethanolic extracts of the leaf and seed of E. serratus exhibited moderate anti-proteinase activity with an inhibition percentage of 51.16, 50.12 and 64.71, 59.34% at 200 and 400µg/ml, respectively. On comparison with the crude plant extracts, the standard indomethacin showed maximum inhibition of 72.41% at 100µg/ml concentration.

Denaturation of protein is one of the causes of arthritis production of auto-antigen in certain arthritic diseases 11. The mechanism of denaturation probably involves alteration in electrostatic hydrogen, hydrophobic and disulphide bonding 12. From the result of present study it can be stated that the ethanolic extract of leaf and seed of E. serratus in high doses are capable of controlling the production of auto-antigen and thereby inhibiting denaturation of protein and membrane lysis leading to arthritic activity. 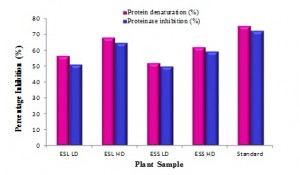 FIG.1: EFFECT OF ETHANOLIC EXTRACTS OF ELAEOCARPUS SERRATUS ON IN VITRO ANTI-ARTHRITIC ACTIVITY

Proteinases have been implicated in arthritis reactions. Neutrophils are known to be rich source of proteinase which carries in their lysosomal granule many neutral serine proteinases. Leukocytes proteinases play an important role is the development of tissue damage during inflammatory reactions and significant level of protection was provided by proteinase inhibitors 13.

Fascinatingly, in the current study, leaf extract showed the maximum inhibition of protein denaturation (68.32%) and maximum anti-proteinase activity (64.71%) at the concentration of 400μg/ml. Obtained data stated that E. serratus could be used as potent anti-arthritic agent. In support of the present study, similar results were obtained using methanolic extract of leaves of Coldenia procumbens 14, Bacopa monniera 15, Asystasia dalzelliana 16, ethanolic flower extract of Callicarpa macrophylla 17 and seed extract of Pongamia pinnata 18.

CONCLUSION: From the results observed in the current investigation, it may be concluded that the ethanolic extract of leaf and seed of E. serratus had a promising in vitro anti-arthritic activity. Further research on these lines may throw light on the possible mechanism of action and facilitate the invention of hopeful drugs from this plant.