ABSTRACT: Siddha is one among the ancient systems of Indian medicine. Its reliability lies in the fact that it is time-tested, devoid of any drastic adverse effects and deep-rooted in the culture and heritage of India.  The role of this system in treating chronic diseases is being widely felt nowadays. The challenges in treating such conditions with the currently available drugs (Non-Steroidal Anti-inflammatory Drugs – NSAID) often results in gastric irritation, renal damage, dependence, etc. Traditional Siddha medicines offer a wide range of Anti-inflammatory drugs which are polyherbal in nature and devoid of the above-said side-effects 1. This paper deals with Anti-inflammatory screening of such a medicine ‘Ashwathi chooranam’ documented in Classic Siddha text “Agathiar Vaithiya Kaaviyam” indicated for arthritis 2. Withania somnifera (Ashwagandha) is widely used in Siddha medicine. It is the main ingredient in many formulations prescribed for a variety of musculoskeletal conditions (e.g., arthritis, rheumatism), and as a general tonic to increase vitality, improve overall health and facilitates longevity 1. In our study, we reproduced an inflammatory state by treating THP-1 cells (human myelomonocytic leukemia) with pro-inflammatory stimuli, such as LPS obtaining an up-regulation in the expression and the activity of nitrate level. Our results show a significant increase in the expression and activity of  Tissue nitrite level when cells were treated with the Test drug in different concentrations.

INTRODUCTION: The usage of NSAID in the treatment of painful musculoskeletal conditions often results in adverse effects such as gastric irritation, renal damage, etc. On the other hand, polyherbal medicines which are safe, effective, time-tested and devoid of drastic side-effects are the need of the hour.

Traditional Siddha Indian Medicine has many such herbal medicines indicated for the treatment of Vatha (arthritis). This research paper deals with the in-vitro anti-inflammatory screening of such a medicine documented in Classic Siddha text, “Agathiar Vaithiya Kaaviyam” indicated for arthritis.

MATERIALS AND METHODS: The test drug (Ashwathi Chooranam) was prepared as per the Standard Operative Procedure (SOP) based on the Siddha literature, ‘Agathiyar Vaithiya Kaaviyam.’ The ingredients of the test drug along with descriptions regarding their botanical names, phyto-chemistry, actions, and uses in Siddha Medicine are given in Table 1. The prepared medicine was subjected to in-vitro Cox inhibitor studies using THP-1 Cell line.

Ingredients of the Test Drug 3, 4:

TABLE 1: INFORMATION ABOUT THE INGREDIENTS OF ASHWATHI CHOORANAM 1, 5, 6, 10

LPS stimulated THP 1 cells were exposed with different concentrations of samples such as 10µg/ml, 50µg/ml and100µg/ml from a stock of 100mg/ml dissolved in 1% DMSO and incubated for 24 hours. The anti-inflammatory effects of samples were determined by assessing the inhibition of COX, spectrophotometrically. The isolation was done by spinning at 6000 rpm for 10 min. The supernatant was discarded, and 200µl of cell lysis buffer (1MTris HCl, 0.25M EDTA, 2M NaCl, 0.5% Triton) was added. The incubation was done for 30 min at 4°C, and enzymes assay was done in pellet suspended in a small amount of supernatant.

Cox Inhibitory Assay: Cyclooxygenase (COX) is an enzyme that is responsible for the formation of prostanoids. The three main groups of prostanoids -- prostaglandins, prostacyclins, and thromboxanes are each involved in the inflammatory response. Lipoxygenases are non-heme iron-containing enzymes that catalyze the stereospecific incorporation of molecular oxygen into polyunsaturated fatty acids with a 1, 4-cis, cis-pentadiene motif leading to the production of leukotrienes leading to inflammation 7. 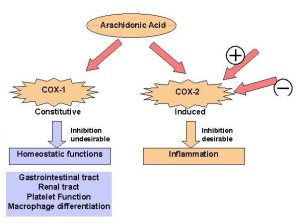 Procedure: The assay mixture contained Tris- HCl buffer, glutathione, hemoglobin & enzyme. The reaction was started by the addition of arachidonic acid and terminated after 20 min incubation at 37 ºC by addition of 0.2ml of 10% TCA in 1N HCl, mixed and 0.2ml of TBA was added, and contents heated in a boiling water bath for 20 min, cooled and centrifuged at 1000rpm for 3 min. The supernatant was measured at 632nm for COX activity and the results are noted.

Estimation of Tissue Nitrite Levels: The level of nitrite level was estimated by the method of Lepoivre et al., 1990). To 0.5 mL of cell lysate, 0.1 mL of sulphosalicylic acid was added and vortexed well for 30 min. The samples were then centrifuged at 5,000 rpm for 15 min. The protein-free supernatant was used for the estimation of nitrite levels. To 200 μL of the supernatant, 30 μL of 10% NaOH was added, followed by 300 μL of Tris-HCl buffer and mixed well. To this, 530 μL of Griess reagent was added and incubated in the dark for 10–15 minutes, and the absorbance was read at 540 nm against a Griess reagent as blank. Sodium nitrite solution was used as the standard. The amount of nitrite present in the samples was estimated from the standard curves obtained. 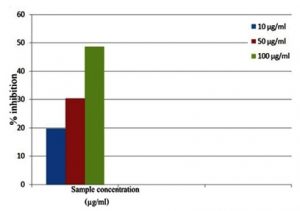 DISCUSSION: The role of Siddha polyherbal medicines in the treatment of painful Musculoskeletal conditions have been well documented since centuries.  In this current scientific world where every claim should be evidence-based, the Authors’ of this research paper tried to prove the efficacy of such a Siddha Medicine through in-vitro cell line studies for its Anti-inflammatory properties and shown in Table 2. When a tissue undergoes inflammation, it regularly releases iNOS which can simultaneously generate NO (nitric oxide) and superoxide. These react rapidly to yield nitrite to peroxynitrite (ONOO). Thus measuring nitrite in a sample can tell you something about ONOO production (and indirectly about NO production) 12, 14.

CONCLUSION: It is concluded that the polyherbal Siddha medicine Ashwathi Chooranam which is being widely used by Traditional Healers and Practitioners of Siddha Medicine to treat arthritis since decades exhibit 48.65% of inhibition at 100 µgm/ml concentration level. It is also evident that the test drug has lowered tissue Nitrite levels of 513 µgm at100 mgm/ml concentration when compared to the control concentration of 722 µgm. This result clearly shows the Anti-inflammatory properties of the test drug along with its efficacy in lowering tissue nitrite levels, thereby increasing Oxy-hemoglobin in the blood circulation.

ACKNOWLEDGEMENT: Sincere thanks are due to all those who helped in preparing this paper.