ABSTRACT: Background: Obesity is a confronting global issue with excess accumulation of body fat to an extent that decreases life expectancy. It is multifactorial in origin; genetic, environmental and pathophysiological. It leads to metabolic syndrome characterized by type 2 diabetes, cardiovascular diseases, fatty liver, hyperlipidemia etc. Objective: In this study, we have screened hydroalcoholic extracts of 7 plants for anti-obesity efficacy using inhibitory effect on lipid and carbohydrate metabolizing enzymes as indicators and further screening of these plants in 3T3 L1 cell line for inhibition of adipogenesis. Results: Among the 7 plants screened, Cyperus rotundus and Citrus limon showed highest inhibitory activity compared to other plants. These plants also showed antioxidant activity. Furthermore, these plants were investigated for their inhibition of adipogenesis and promotion of lipolysis in 3T3-L1cells. Cyperus rotundus and Citrus limon at 125 µg/mL showed inhibition of triglyceride accumulation and promoted lipolysis. Conclusion: Over all preliminary in-vitro screening study reveals Cyperus rotundus and Citrus limon showed potent anti obesity efficacy thus these plants may act as alternative herbal approach for treating obesity.

INTRODUCTION: Obesity is a swiftly growing epidemic worldwide. Since existing pharma-ceuticals fall short to provide long-term solution due to the adverse side effect. Medicinal plants are known to possess anti-obesity property. Since ancient times, medicinal plants have provided pivotal tool as an alternative approach against pharmacological agents. Medicinal plants act as the anti-obesity agent through various mechanisms such as appetite suppressants, modulators of adipogenesis, anti-lipid hydrolysing enzyme such as pancreatic lipase and lipoprotein lipase, and metabolic stimulants through thermogenesis 1.

Obesity leads to the pathogenesis of various chronic diseases, such as cardiac injury, hypertension, type 2 diabetes. Recently countering obesity by exploiting plant extracts has gained popularity due to the adverse side effects of pharmacotherapy.  It is known that adipocytes play a pivotal role in modulating obesity by hypertrophy and hyperplasia, conversion of pre-adipocytes to mature adipocytes 2. This condition of the adipose tissue is attributed to nutritional disequilibrium between energy intake and energy expenditure leading to obesity.

This process is highly regulated by adipokines released by adipose tissue. A dysfunction in this process leads to accumulation of excess fat resulting in obesity 4.

The present study has been aimed to screen the anti-obesity effects of a few medicinal plants by assessing inhibitory effect on digestive enzymes; pancreatic lipase, alpha amylase and alpha-glucosidase and further inhibition of lipid droplet accumulation in 3T3 L1 cell line.

Pancreatic lipase is a major lipid hydrolyzing enzyme converting triglyceride to monoacyl-glycerol and free fatty acids. Inhibition of this enzyme reduces digestion and absorption of fat from food thereby reduces weight gain 5. Thus monitoring this enzyme provides a potential approach for screening anti-obesity agents in medicinal plants. Obesity causes decrease in insulin sensitivity there by leading to type 2 diabetes 6. Targeting digestive enzymes alpha-amylase and alpha-glucosidase which catalyze the conversion of starch to disaccharide and further conversion of disaccharides into monosaccharide’s 7. Inhibition of these enzymes leads to decrease in glucose absorption which provides potential approach for treatment of type 2 diabetes.

In a recent study, it has been found that major bioactive compound in plant material are flavonoids and polyphenol  which have been found to be potent anti-obesity bio active agents decreasing fat absorption by inhibiting pancreatic lipase enzyme and lipoprotein lipase, increase fat oxidation and decrease adiposity 8.

Our main objective of this study is to screen selected plant extracts for antiobesity efficacy.

Flavonoid content was measured by Quercetin as standard with different concentration (100 - 1000 μg) and volume made up to 1 mL with distilled water. To this 75 μL of 5% NaNO2 and 150 μL of 10% AlCl3 was added and incubated for 10 minutes at 37 ºC. To this mixture 0.5mL of 1M NaOH and 0.75 mL of distilled water were added and the absorbance was measured at 510 nm against reagent blank. The results were expressed in terms of μg (quercetin equivalents) QUE/mg of extract.

Reducing Power: Reducing power was evaluated by using ascorbic acid as standard (1 mg/mL) and plant extracts (1 mg/mL) was taken in different concentration in test tubes and the volume was made up to 1 mL using distilled water. To this 2.5 mL of phosphate buffered saline and 1% potassium ferric cyanide were added and the reaction mixtures were incubated at 50 °C for 20 min. Finally to the tubes 2.5 mL of 10% TCA, 0.1 mL of 0.1% ferric chlorides and 2.5 mL of distilled water were added. The absorbance of each sample was measured at 700 nm using a spectrophotometer and the results were expressed in terms of μg (ascorbic acid equivalents) AAE/mg of extract by Padmanabhan et al., 2012 13.

DPPH Radical Scavenging Assay: DPPH (1, 1-Diphenyl-2-picrylhydrazyl) is a stable free radical, DPPH reacts with an antioxidant or reducing compound and produces the corresponding hydrazine DPPH2, which is converted from purple to yellow colour  by Blois 14 BHA (1 mg/mL) was used as standard. Plant samples (10 mg/mL) were taken and the volume was made up to 3 mL using methanol. 0.5 mL DPPH solution (500 μM) was added and incubated at room temperature for 45 min. The absorbance was read at 515 nm and the results were expressed in terms of IC50 values.

ABTS Radical Scavenging Activity: Scavenging of ABTS a cation was evaluated using ascorbic acid as standard with slight modification in procedure of Re et al., 1999 15. Prior to the assay, the ABTS reagent was prepared by mixing 7 mM ABTS and 2.45 mM potassium persulphate and the solution was diluted with ethanol to get a blue-green chromophore with an absorbance of 0.700 ± 0.025 at 734 nm. The extracts (10 mg/mL) were added in different concentrations and the volume made up to 1 mL using distilled water. To this 1 mL of ABTS reagent was added and the samples were incubated at room temperature for 6 min. The absorbance was measured at 734 nm and the results were expressed in terms of IC50 values.

Where A is the activity without inhibitor,

a is the negative control without inhibitor.

B is the activity with inhibitor.

b is the negative control with inhibitor.

Alpha-Amylase Inhibitor Activity: The alpha-amylase activity was estimated using method described by Xiao et al., 2006 17 with slight modification. The substrate was prepared by dissolving starch (500 mg) in 25 mL of 0.4M NaOH and boiling for 5min at 100 °C. The substrate (40 μl) and different plant extract in varying concentration were mixed and pre-incubated at 37 °C for 3 min. Then 20 μL of the α-amylase solution (50 μg /mL) was added to each well, and the plate was incubated for 15 min. The reaction was terminated by adding 80 μL of 0.1M HCl and then 200 μL of 1mM iodine solution was added. The absorbance (Abs) was measured at 650 nm. Inhibitory activity was calculated as follows:

Alpha-Glucosidase Activity: The inhibition of α-glucosidase was measured using 1 mg of α-glucosidase dissolved in 100 mL phosphate buffer pH 6.8 and 5 mM p-nitrophenyl α-D-gluco-pyranoside. Plant extracts at different concentration were premixed with 490 μL phosphate buffer pH 6.8 and 250 μL of 5 mM p-nitrophenyl α-D-gluco-pyranoside (p-NPG). After pre-incubation at 37 ºC for 5 min, 250 μL α-glucosidase (0.15 unit /mL) was added and incubated at 37 ºC for 15 min. The reaction was terminated by the addition of 2000 μL Na2CO3 200 mM α-glucosidase activity was measured at 400 nm by monitoring the quantity of p-nitrophenol released from p-NPG at 400 nm. The concentration of the extract required to inhibit 50% of α-glucosidase activity under the assay conditions was defined as the IC50 value.

Cell Culture and Induction of Differentiation: 3T3-L1 pre adipocytes a mouse fibroblast cell line was obtained from National Centre for Cell sciences, Pune India. 3T3-L1 preadipocytes were grown in High glucose DMEM supplemented with 10% FBS at 37 °C in an atmosphere containing 5% CO2. To induce adipocyte differentiation, 2-days post-confluence 3T3-L1 preadipocytes (day 0) were incubated with (10 μg/mL insulin, 2.5 μm dexamethasone and 0.5 mM 3-isobutyl-1-methyl-xanthine) along with plant extract for 48 h (day 2). Then 10 μg/mL insulin was added up to (day 4) and media was changed every alternate day with plant extracts up to 8 days 18.

Oil Red O Staining: Lipid accumulation in differentiated adipocyte was measured by oil red staining. Cells were washed with phosphate buffered saline and cells were fixed with 10% formalin for 1hour and stained for 30 min with 0.5% oil red stain in 100% isopropanol. Images were captured by Olympus microscope. The stain retained by lipid droplet was eluted by isopropanol and quantified by measuring at 510 nm.

Triglyceride Estimation and Free Glycerol Release: Triglycerides in cell were estimated using commercially available triglyceride kit (Agappe diagnostics Ltd., Ernakulum Kerala India) according to manufacturer instructions. The cells were washed with PBS, scraped and lysed in homogenizing buffer (42 mM KCl, 1mM EDTA and 50 mM tris pH 7.4) and cell lysate was centrifuged at 3000 g for 10 minutes at 4 ºC. Supernatant was assessed for triglyceride content. Lipolysis was measured by commercially available free glycerol reagent after 24 h adipocyte differentiation with and without plant extracts. 50µl of the cell incubation medium was taken and incubated with free glycerol reagent for 15 min. The glycerol content was measured at 540 nm.

Phytochemicals play a role in the treatment of obesity through various mechanisms. Polyphenols have potential anti-obesity efficacy, they inhibit fat metabolizing enzymes pancreatic lipase, lipo-protein lipase, and glycerol phosphate dehydro-genase. Polyphenol extracts are able to decrease the blood levels of glucose, and lipid profile, increase energy expenditure and fat oxidation. Flavonoids are plant secondary metabolites; these have been previously reported that they play important role in inhibition of pancreatic lipase activity 19. Obesity is characterized by low-grade inflammation due to increase in mass of adipose tissue causing hypoxia which in turn secretes pro-inflammatory cytokines. This leads to cardiovascular diseases. The free radical scavenging capacity of herbal extracts inhibits oxidation of macromolecules thereby preventing various diseases which are related to stress, like obesity such cancer and cardiovascular diseases 20, 21.

The antioxidant activity was analyzed by an array of in-vitro assay Cyperous rotundus and Citrus limon showed highest reducing power in comparison with other plants and the activity was expressed in ascorbic acid equivalent. There was dose dependent increase in quenching of free radical with the increase in extract concentration. The results are expressed as IC50 values are shown in Table 2 Cyperous rotundus, Nigella sativa and Citrus limon exhibited stronger radical scavenging activity.

Values are expressed as mean ± SD in triplicates

Values are expressed as mean ± SD in triplicates

Inhibitory Effect on Carbohydrate Hydrolyzing Enzymes: The hydrolysis of starch to disaccharide and then monosaccaride is carried out by alpha amylase and alpha glucosidase. The inhibition of this enzyme by the plant extract was studied Table 3. It was found that Cyperus rotundus and Nigella sativa showed highest inhibitory activity.

3T3 -L1 adipocyte cell line serve as in-vitro model system to study anti-obesity activity because it differentiates from preadipocyte to mature adipocyte which is specialized in the accumulation of lipid droplet upon treatment with cocktail insulin, dexamethasone and IBMX. Our results indicate the 125 µg/ mL of Cyperus rotundus show significant reduction in lipid droplet accumulation followed by Citrus limon in Fig. 1.

Interestingly 125 µg/ mL of Nigella sativa induced adipogenesis instead of inhibition. This may be due to excess uptake of glucose and conversion to triglycerides. Our results correlated with previous studies where in Nigella sativa treatment of preadipocytes undergo differentiation with excess accumulation of triglyceride compared to treatment with 10 μm rosiglita zone standard drug. It was attributed that Nigella sativa showed insulin-like properties and anti hyperglycemic activity 24, 25. 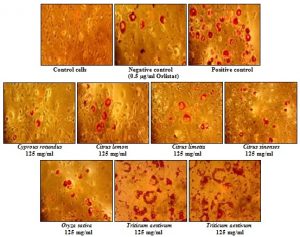 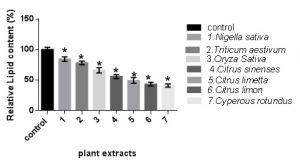 Lipolysis was assessed by estimating the free glycerol released into the medium. Treatment of plant extract seemed to increase in lipolysis suggesting that these plants have anti-obesity efficacy.

CONCLUSION: The preliminary screening study indicates that Cyperus rotundus and Citrus limon found to be potent herbal approach for treatment of anti-obesity by inhibiting lipid and carbohydrate metabolizing enzymes compared to other plants. Inhibition of triglyceride accumulation and increase lipolysis by reducing of adipogenesis compared with standard drug orlistat in 3T3 L1 cell line. Thus our study provide new arena for treatment of obesity.

CONFLICT OF INTEREST: The authors have no conflict of interest regarding the publication of paper.