ABSTRACT: The overproduction of oxidants in the body leading to different side effects and chronic diseases, including oxidative stress. The oxidative stress is the overproduction of the oxidant's condition in the body, which leads to metabolic imbalance and leading to diseases. It is one of the main diseases around the world, affecting the human lifestyle, either psychologically and physically. The natural products have been using as medicines and food supplements because of their nutritional values and less side effects. The current study was aimed to evaluate the free radical scavenging activity of Elytraria acaulis root extracts on different free radicals. The anti-oxidant activity was studied against 2, 2-diphenyl-1-picrylhydrazyl (DPPH), superoxide, and hydroxyl free radicals using standard methods. The Elyraria acaulis root part extracts showed concentration-dependent antioxidant activity on free radicals. The extracts showed a moderate effect on free radicals compared to the standard drug ascorbic acid, and hydro-alcoholic extract possesses more activity than the other two extracts. The end results of the current study clearly state that Elytraria acaulis root possess free radical scavenging activity and also confirms its' traditional value in traditional medicine.

INTRODUCTION: The medicinal plants (MPs) are playing a vital role in maintenance of human health since ancient time 1, 2, 3. The main traditional medicines (TMs) using medicinal plants in the treatment of different ailments around the world are Ayurveda, Homeopathy, Tibetan medicine, Unani system, Chinese traditional medicine etc., 3. The developments in science and technology enhanced the possibilities of treatment to different diseases within less time and affected the risks of infectious diseases 4, 5. But, at the same time, the use of modern medicine increased the risks of side effects and emergence of new diseases around the world 6.

As above said, there were lots of MPs are available around the world and many of their chemical and biological activities are scientifically not explored. So, the current study was aimed to evaluate antioxidant activity of Elyraria acaulis root extracts. Oxidants are most unstable molecules and reactive. Oxidants are produced in body metabolisms and in the environment, because of their nature they can react with the other molecules and destabilize them 7.

That destabilization of other molecules include proteins, lipids, deoxyribonucleic acids or ribonucleic acids, etc., cause the cellular dysfunction. Antioxidants are molecules that are reacts with oxidants and stabilize them without reacting with bimolecular components 8. The antioxidants are also produced in the body for like oxidants to stabilize them if the production of them is an imbalance, the body will be under oxidative stress 9.

The current day lifestyle and overconsumption of food are altering these levels and leading to different side effects and chronic diseases 10. Thus, people are looking to take food supplements to equalize or reduce overproduced oxidants. Medicinal plant products are major nutritional supplements that have been using for healthier life 11. The knowledge about chemical constituents and biological activities of medicinal plants will help to enhance their usage around the world because of their less side effects and high nutritional values 12. Elytraria acaulis is one such medicinal plant that has been using in traditional medicine and less known about its' biological activities scientifically.

Elytraria acaulis is a perennial herb that belongs to the family Acanthaceae. Elytraria acaulis is growing widely in woodland, sandy land regions around the world. E. acaulis has been using in traditional medicine for different ailments 13, 14, 15. The root part has been using as paste for treatment of leucorrhoea, snake bites, abscess of mammary glands, throat compliments like tonsillitis. There were few reported biological activities but very were reported on root part 16. So, the current work aimed to evaluate the antioxidant activity of E. acaulis root extracts.

Plant Material Collection and Extracts Preparation: The plant material Elytraria acaulis was at pulnadu region, Andhra Pradesh, India, and authenticated by Dr. Prayaga Murthy. Pragada, Government Degree College, Yeleswaram, E. Godavari, Andhra Pradesh, India. The roots were separated from the freshly collected plant material and wash under running tap water to remove unwanted material. The cleaned roots were shade dried and granulated into fine powder for further use. The powder was used for the preparation of extracts successively with hexane, ethyl acetate, and hydro-alcoholic [70% Ethanol (hyd-alc)] using maceration. The prepared extracts were stored in a desiccator for further use.

Superoxide Radical Scavenging Activity: Superoxide scavenging activity of the selected plant extracts were evaluated as per standard methods. It is by absorption of light at 560 nm induction of superoxide free radical generation by riboflavin and corresponding reduction by nitroblue tetrazolium 18.

Hydroxyl Radical Scavenging Activity: The scavenging activity of selected plant extracts on hydroxyl radical was measured as per the established method.

It was studied by the competition between deoxyribose and the extract’s antioxidant molecules for hydroxyl radicals generated from the Fe+2/EDTA/H2O2 system 19.

DPPH Radical Scavenging Activity: The DPPH radical scavenging activity was measured as per methods. This method is based on the measure of color absorbance of alcoholic DPPH solution (Blue color) after the addition of the antioxidant solution (Extract / Compound). If antioxidants present in the test compound blue color yellow color due to DPPH 20, 21.

Calculation of Percentage Inhibition: The percentage inhibition of superoxide production by the extract was calculated using the formula: 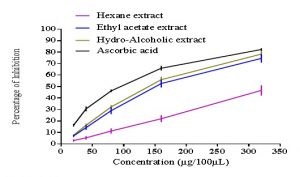 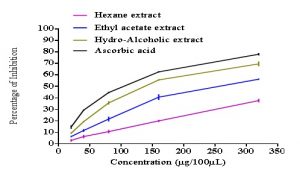 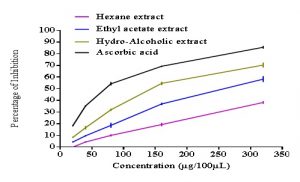 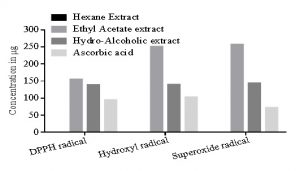 DISCUSSION AND CONCLUSION: Nowadays, oxidative stress (OS) became one of the major chronic diseases around the world. The main cause OS is an overproduction of reactive oxygen species (ROS) against antioxidants in the body 22, 23. These ROS play an important role in body metabolisms and signal transduction at moderate levels 24. As above said, the over oxidants playing a vital role in the chronic disease development and their side effects, and they cause the oxidative damage macromolecules (lipids, proteins, nucleotides, nucleosides, etc.,) 19, 22, 25. In the last two decades, several research studies reporting that there is a direct connection between them and acute stress (psychological/physiological) can lead to OS 26, 27, 28. The main ROS is superoxide free radical and is a precursor to others such as hydroxyl, hydrogen peroxide, etc. The produced ROSs enhances the endogenous reactions and damages the cellular functions and finally leads to cell death 29, 30. So, there is a need to prevent the OS from different ROS and their side effects. Natural products have been using in traditional medicines for a long time in the treatment of different diseases and are using nutritional supplements 31, 32. The researchers from the last two decades are working on unexplored natural products in the identification of new biologically active compounds to treat different diseases, including OS 33. The natural products contain different chemical constituents like polyphenols, alkaloids, tannins, steroids, glycosides etc.. All these compounds work either individually or synergistically on diseases 34, 35, 36. There were different reports on these compounds against OS. In this point of view, the current study was carried to assess the anti-oxidant activity of unexplored traditional medicinal plants, i.e., Elytraria acaulis.

The root parts of E. acaulis have been using in the treatment of leucorrhoea, snake bites, abscess of mammary glands, throat compliments. In our previous studies, we found, the extracts of E. acaulis possess antibacterial activity on different pathogenic bacteria. The present study also confirms the anti-oxidant activity of E. acaulis. In both studies, hydroalcoholic extract posses more activity compared to the other two extracts. Further studies are under progress, such as the identification of chemical components, isolation of pure compounds, and evaluation of different biological activities like hepatoprotective, anti-inflammatory activities.

CONFLICTS OF INTEREST: None to declare.