ABSTRACT: Free radicals are toxic by products of natural cell metabolism and are responsible for causing a wide number of health problems. Okra is a one of the traditional plant scientifically known as Abelmoschus esculentus Linn. belong to the family Mallow, having rich nutritional value and proved to have many therapeutic uses, various parts of this plant is used in different types of treatment, preparation of pharmaceutical products and also used in preparation of fibers. Scientifically leaf extract of Abelmoschus esculentus proved to have antipyretic, antispasmodic, anti-cancer, immuno modulatory activity. In this study petroleum ether extract, chloroform, Ethanolic extracts of Abelmoschus esculentus Linn. leaves were evaluated in-vitro by experimental parameters such as DPPH scavenging activity, Nitric oxide radical, Hydroxyl radical scavenging, superoxide dismutase scavenging capacity. Abelmoschus esculentus Linn. is used as an antioxidant, antidiabetics, hepatoprotective, cytotoxic activity, genetoxicity, antitumour activity, antilice agent. It is related to contain alkaloids, carbohydrates, fixed oils, tannins and phenolic.

INTRODUCTION: According to the WHO survey 80% populations living in the developing countries rely almost exclusively on traditional medicine for their primary health care needs 1. The use and search of drugs and dietary supplements from plants have been intensified in recent years 2. Medicinal plants are a source of great economic value in the Indian sub continent.

For most of the disease, plant materials are used as drugs because of its active compounds. In many disorders the free radical mediated damage may play an important role. Free radicals are responsible for causing a wide number of health problems which include cancer, aging, heart diseases and gastric problems etc. Antioxidants cause protective effect by neutralizing free radicals, which are toxic by products of natural cell metabolism. The human body naturally produces antioxidants but the process is not 100 percent effective in case of overwhelming production of free radicals and that effectiveness also declines with age 3. Antioxidant compounds can decrease oxidative stress and minimize the incidence of these diseases.

The mechanism of the action of these antioxidant compounds include suppression of reactive oxygen species formation either by inhibition of the enzymes or by chelating of trace elements involved in free radical production, scavenging of reactive species and up- regulating or protecting antioxidant defense 4 .

Abelmoschus esculentus L. is referred as bullock's heart belongs to Malvaceae family having a smooth skin fruit that becomes dull red when ripe. Less volatile substances such as alkaloids, diterpenoids, and acetogenins 5 have been identified so far from oil of various parts of the plant. However, the antioxidant potential of Abelmoschus esculentus leaf is not yet been explored properly. With this in mind, the present work was an attempt to perform anti oxidant studies on the leaf extracts of a Abelmoschus esculentus.

Collection of Plant Material: The leaves of Abelmoschus esculentus Linn. were collected from the nearby fields of Guntur district September 2017 and were authentified by Prof. D. Ramakanth raju retired botanist and a voucher specimen (V.S: 01, 1/09/2017) has been deposited in K.C Reddy college of pharmacy, Medikonduru, Guntur district Andhra Pradesh.

Preparation of Plant Extracts: Collected plant material has been dried under shade and made into coarse powder passed through sieve# 20 and has been successively soxhlated using solvents of increasing polarity petroleum ether, chloroform and ethanol obtained extracts were made solvent free using rota evaporator and stored in dessicator until further use.

DPPH Radical Scavenging Activity: The free radical scavenging activity of the extracts, based on the scavenging activity of the stable 1, 1 diphenyl-2- picrylhydrazyl (DPPH) free radical, was determined by the method of 6. To a methanolic solution of DPPH (200 µ M), 0.05 ml of test compounds dissolved in ethanol were added at different concentration (100 - 500 µg/ml). an equal amount of ethanol was added to the control after 20 min the decrease in the absorbance of test mixture (due to quenching of DPPH free radicals) was read at 517 nm and the percentage inhibition calculated by using the formula:

Nitric Oxide Radical Scavenging Activity: Nitric oxide radical scavenging activity of extracts was measured according to method 7 of   Griess reagent was prepared accordingly: Solution A: 1% sulphanilamide in 5% ortho phosphoric acid or 25% v/v hydrochloric acid. Solution B: 0.01% napthyl ethylene diamine in distilled water. Solution A and Solution B were in mixed equal volumes within 12 h of use. Sodium nitropruside 5mM was prepared in phosphate buffer pH 7.4 (0.0373 g in 25 ml). To 1 ml of various concentrations (100 - 500 µg/ml) of the extracts, 0.3 ml of sodium nitropruside was added in the test tubes. The test tubes were incubated at 25 ºC for 5h. 0.5 ml of Griess reagent was added. The absorbance was measured at 546 nm.

2, 2’-azinobis- (3-ethyl benzothiazoline-6- sulfonic acid) (ABTS) Radical Scavenging Model: The ability of various plant extracts to scavenge the (ABTS) radical cation was determined by previously described methods 8. A solution of ABTS radical cation (ABTS +) was prepared by the reaction of 7 Mm ABTS and 2.45mM potassium persulfate at room temperature in the dark for 16 h. The ABTS+ solution was then diluted with 80% ethanol to obtain an absorbance of 0.700 ± 0.005 at 734 nm by UV-Visible spectrophotometer (shimadzu UV-Vis 1800). Selected plant extracts at a range of 100  -500 µg/ml) concentrations 0.3 ml of ABTS solution (2.7 ml), the reaction mixture was allowed to stand at 30 ºC for exactly 30 min, and the absorbance at 734nm was recorded. L-Ascorbic acid was used as reference all the test analysis were run in triplicate and averaged. The level of radical scavenging was calculated using the formula:

A0 = Absorbance of the control,

A1=Absorbance of the extract/ standard.

Statistical Analysis: All the experiments were performed in triplicate and results were averaged. Linear regression was used to calculate the IC50 values 9.

RESULTS: Several concentrations ranging from 100 - 500 µg/ml of the petroleum ether, chloroform and ethanolic extracts of Abelmoschus esculentus leaves were tested for their antioxidant activity in three different in-vitro models. It was observed that free radicals were scavenged by the test compound in a concentration dependent manner in all the three models. 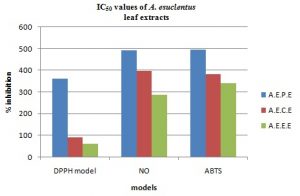 From the results obtained from the in-vitro reaction of extracts with reagents in, DPPH, Nitric oxide and ABTS models ethanolic extracts of Abelmoschus esulentus has shown highest percentage inhibition at higher concentration of 500 µg/ml, and the IC50 values of these extracts were found to be 60, 286, 340 respectively, in all the three antioxidant models Abelmoschus esculentus leaf extracts have shown significant antioxidant activity.

DISCUSSION: DPPH is a stable free radical. The in-vitro study carried out on this radical is based on the measurement of the scavenging ability of antioxidants towards the stable radical DPPH. This radical reacts with suitable reducing agents, the electrons become paired off and the solution loses colour stochiometrically depending on the number of electrons taken up 10. From the present results, it may be concluded that the extracts reduce the radical to the corresponding hydrazine when they react with the hydrogen donors in the antioxidant principles. In the present study, the nitrite produced by the incubation of solution of sodium nitroprusside in phosphate buffer was reduced by both the extracts of both species. This may be due to the antioxidant principles in the extracts which compete with oxygen to react with nitric oxide and thus inhibit the generation of nitrite 11.

2, 2’-azinobis-(3-ethyl benzothiazoline-6- sulfonic acid) (ABTS) formed from the reaction ABTS-e------ABTS+ reacts quickly with ethanol/hydrogen donors to form colorless ABTS 12. The reaction is pH-independent. A decrease of the ABTS+ concentration is linearly dependent on the antioxidant concentration. All the fractions at tested doses (100 - 500 µg/ml) revealed good scavenging activity for ABTS+ in a dose dependent manner.

CONCLUSION: Oxidative stress has been implicated in the pathology of many diseases and condition including diabetes, cardiovascular diseases, inflammatory conditions, cancer and aging.

From the present research work we conclude that Abelmoschus esculentus ethanolic Leaf extracts has got maximum antioxidant activity than compare to other extracts in a dose dependent manner. This may be attributed to the presence of acetogenins, phenols which probably play a role as an effective free radical scavenger.

ACKNOWLEDGEMENT: Authors are thankful to the Management of Nirmala College of Pharmacy and K. C. Reddy College of pharmacy, for their support in the form of providing facilities.

CONFLICT OF INTEREST: The Authors declare no conflicts of interest.