ABSTRACT: Objective: The flavonoid baicalein, is historically used as an herbal medicine by the Chinese, which produces a wide range of pharmaceutical effects, among which is the potent anticancer activity which has raised a great conflict of interest in the recent years. This study aims to verify the anti-proliferative and the cell viability effects of baicalein on metastasis of MCF-7 human breast cancer cell lines by in-vitro, to investigate the related mechanisms. Methods: MTT assay was used to investigate the anti-proliferative activity of baicalein using MCF-7 cell lines and trypan blue assay method were used to examine the effects of baicalein on cell viability on MCF-7 cell lines. Results:  The in-vitro cytotoxicity activity studies were proved that cancer cell lines were inhibited significantly with the increasing of sample concentration.

INTRODUCTION: Cancer is a disease that origins as a renegade human cell over which the body has lost control. For the body and its organs to function properly, the cell growth needs to be strictly regulated. Cancer cells, however, continue to divide and multiply at their own speed, forming abnormal lumps, or tumours. Cancer cells are not naturally born to kill the cells. There are different types of tumours present. Benign tumours are referred as tumours which do not spread elsewhere in the body. But malignant tumour cells do invade the other tissues and will also continue to spread to other parts, if left untreated, often leading to secondary cancers 1. Cancers can originate from any part of the body cells, it is due to the damage or defects in the genes involved in cell proliferation.

Mutations occur in time unknowingly, which is the reason why people tend to develop cancer later in life. The causes for these cell changes remains unclear, but the diet, lifestyle, viral infections, exposure to radiation or harmful chemicals, and inherited genes are the most common among the factors that are thought to affect a person's risk of cancer 2.

Breast cancer is now commonly found in one in four cancers diagnosed in women. Studies suggest that the genes that we inherit from our parents can affect the chances of developing the tumour cells. A woman with an affected mother or sister is about twice as likely to develop breast cancer more easily when compared with a woman with no family history of the disease. Lifestyle also have the influence, particularly in the Western countries it is prone to women having children’s in later ages. In general, women who have their child birth after the age of 30 are thought to have a more greater risk of developing the breast cancer than those who became mothers in their teens 3.The reason behind the cause of breast cancer is still unknown.

The physicians identify the presence of the breast cancer only when it occurs when some of the breast cells starts to grow abnormally. These cells divide more rapidly than the normal healthy cells do and continue to accumulate, thus forming a lump or mass. The cells may spread through the cells of the breast to the lymph nodes or and then to the other parts of the body 4. Breast cancer most often originates in the cells in the milk-producing ducts which is known as invasive ductal carcinoma. Breast cancer may also originate from the glandular tissues called lobules which are called as the invasive lobular carcinoma or in other cells or tissue within the breast 5. If found to have a family history of breast cancer or other cancers, the physician may recommend a blood test to identify the specific mutations in the BRCA gene or the other genes that are being passed through the family. A genetic counsellor can also see to the benefits, risks and limitations of genetic testing with the patient and guide them on the appropriate genetic testing 6.

Baicalein (5, 6, 7-trihydroxyflavone; BAE, molecular formula C15H10O5), is a flavonoid that is obtained from various plant species 7. The flavonoid is obtained in a purified form, which has a well-defined chemical structure and in addition to the various pharmacological effects that it produces, baicalein has been widely used to treat various other diseases such as inflammatory diseases, allergies, thrombosis and ischemia, as well as being a scavenger of oxygen free radicals 9 - 14. Also, it has been shown that baicalein has therapeutic effects on non-tumorous diseases, such as acute liver failure and acute myocardial ischemia 9, but it also exerts an inhibitory effect on tumour diseases, which includes colorectal, prostate, liver, lung, skin, stomach and ovarian cancer 9 - 13.

It has also been found that baicalein has a wide -range of potential antitumor effects in terms of: i) Restraining cell proliferation, invasion and metastasis; ii) completely inhibiting the cell cycle; iii) promoting cell apoptosis; iv) preventing tumour angiogenesis; v) induces tumour cell differentiation; and vi) removing reactive oxygen free radicals and preventing the tumorigenesis 14, 15. Some of the latest research activities of the compound baicalein has been included along the following lines. The earlier research activities demonstrated that a clear reduction in cellular proliferation in one human pancreatic cancer cell line, BxPC-3, when exposed to micromolar concentrations of baicalein 16. More research studies of baicalein shows that how Mcl-1 expression (more so than other pro-apoptotic proteins) correlates with cancer cell resistance to chemotherapy and also how it inhibits the protein sensitizes of the cells to treat by eliminating a barrier to apoptosis, in the form of drugs and radiation 17 - 20. Metastasis of the breast cancer cells is the major cause of morbidity and mortality around the world. Thus, interruption of metastasis is one of the approach for the anti-metastatic therapy 21. The substances such as baicalein, promise to offer in dietary chemoprevention, as chemo-therapeutic adjuvants, or as targeted therapy 22.

Materials: The drug was purchased from Sigma Aldrich, Bangalore, India.

Preparation of MCF-7 Cell Suspension: A subculture of MCF – 7 in Dulbecco’s Modified Eagle’s Medium (DMEM) was trypsinized separately, after discarding the culture medium. To the disaggregated cells in the flask 25 mL of DMEM with 10 % FCS was added. The cells suspended in the medium by gentle passage with the pipette and the cells homogenized.

Seeding of Cells: One mL of the homogenized cell suspension was added to each well of a 24 well culture plate along with different concentration of sample 1(0 to 300 μg/mL) and incubated at 37 °C in a humidified CO2 incubator with 5 % CO2. After 48 hrs incubation the cells were observed under an inverted tissue culture microscope. With 80% confluence of cells cytotoxic assay was carried out 23.

Cytotoxicity Assay: The assay was carried out using (3‐(4, 5‐dimethyl thiazol‐2yl) ‐2, 5‐ diphenyl tetrazolium bromide (MTT). MTT is cleaved by mitochondrial succinate dehydrogenase and reductase of viable cells, yielding a measurable purple product formazan. This formazan production is directly proportional to the viable cell number and inversely proportional to the degree of cytotoxicity. After 48 hrs incubation, the wells were added with MTT and left for 3 hrs in room temperature. All wells were removed the content using pipette and 100 μl SDS in DMSO were added to dissolve the formazan crystals, absorbance’s were read in Lark LIPR- 9608 micro plate reader at 540 nm 24.

Trypan Blue Test/Dye Exclusion Test: Cell suspension at a high concentration (approx 106 cells/ml) was prepared. Clean hemocytometer slide was taken and cover slip was fixed in place. 100 μl /well of cell suspensions (0.5 - 2.0×105 cells/ml) were seeded in 96 well micro titer plates and incubated at 37 °C to allow for cell attachment. The spent media was removed from each well. Drug mixed with media was added to each well and allowed to incubate for 48 hours. After 48 hrs, the contents of the well were emptied and 50 μl of trypan blue was added. After 30 sec, trypan blue was completely removed from the well and observed under microscope. Cells were counted. The number of stained cells and the total number of cells were counted.

Viable cells exclude trypan blue, while dead cells stain blue due to trypan blue uptake 25. The IC50 (concentration of drug resulting in a 50 % reduction in the counted cell number at the end of the drug treatment as compared to that at the beginning) indicating a net loss of cells following treatment is calculated from:

RESULTS: The in-vitro cytotoxicity activity studies were proved that cancer cell lines were inhibited significantly with the increasing of sample concentration. It was observed in results (Table 1). In MCF-7 cell line more cytotoxicity effect was observed in all sample in 48 hours treatment, it also revealed that increased concentration of extract shown good toxicity over the cancer cell (Fig. 1). This effect is due to the drug having more specific activity to cancer cell line. It was recorded that IC50 showed was 75 g/mL in MTT assay (Fig. 2). In supporting to the MTT assay, the trypan blue staining also showed good agreement with MTT assay as shown 75g/mL IC50 concentration (Fig. 3) 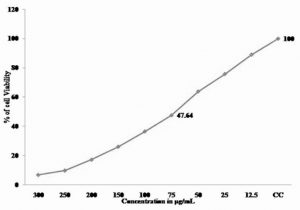 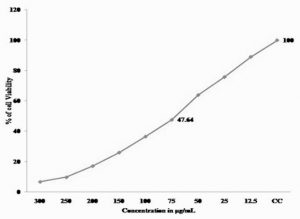 CONCLUSION: Breast cancer is the most commonly occurring malignant tumour in women in the world and most of the patients are diagnosed with advanced breast cancer have been prone to serious suffering from the systemic metastasis who are prone to high death rate. Although chemo-therapy, radiation therapy and the other targeted therapy are able to inhibit, prevent and kill the cancer cells, but certain cancer cells are resistant to these treatments and may further proliferate and metastasize; these treatments therefore remain ineffective due to their toxicity and also their resistance to the towards the normal cells. Thus, the drug baicalein was proved to possess in-vitro cytotoxicity activity and it was concluded that using MCF-7 cell line the drug inhibited the cancer cells significantly with the increasing of sample concentration by MTT assay and trypan blue assay.

ACKNOWLEDGEMENT: I express my deep sense of gratitude and indebtness to my dynamic guide for her excellent suggestion, constant inspiration and personal encouragement throughout my project work. I take pleasure to express my sincere thanks to Dr. Malarkodi Velraj, M. Pharm, Ph.D. (Department of Pharmacognosy) for her valuable suggestion and encouragement.