ABSTRACT: Yemen is located on the southwestern brink of the Arabian Peninsula. The methanolic and aqueous crude extracts of two Yemeni traditional medicinal plants Myrtus communis L. and Flemingia grahamiana Wight & Arn were evaluated for antibacterial activity in-vitro by Well- diffusion method against six bacterial pathogens, Staphylococcus aureus, Pseudomonas aeruginosa, Proteus mirabilis, Klebsiella pneumoniae (clinical samples), Staphylococcus aureus ATCC43300 (MRSA) and Escherichia coli ATCC25922, in Aurangabad city, India. Four concentrations for each extract (2.5, 5, 7.5, and 10 mg/well) were used. The results of antibacterial activity of methanol extracts at (10 mg/well) concentration of Myrtus communis and Flemingia grahamiana showed maximum zone of inhibition (25.2mm, and 25.7mm) against P. mirabilis and S. aureus, respectively. Extracts of Flemingia grahamiana have not shown inhibition zones against K. pneumonia and E. coli (ATCC 25922). The MIC was tested at a range of concentrations from 25 mg/ml to 0.781 mg/ml for each plant extract. M. communis extracts showed the highest values with MIC of 0.781 for all isolates except E. coli. Also, MIC of methanolic extract of Flemingia grahamiana was 0.781mg/ml for S. aureus and MRSA, and MIC of aqueous extract was 0.781 mg/ml for MRSA.

INTRODUCTION: The Republic of Yemen is located in the southwest of the Arabian Peninsula 1. Medicinal plants and herbs have been important to people throughout history in Yemen as a local treatment for infections and diseases as well as cosmetics, spices, and dyes 2. In Yemen, there is a huge diversity of plants, where there are more than 3000 plant species, of which 10% are considered native 1, 3.

Therefore, it’s a necessity to proceed to screen these plants to discover new active components with the possibility of action against multi-resistant bacteria and also to tray decreasing toxicity of commercial antibiotics, environmental problems, cancer genic and high costs 4.

In this study, we highlight two species of the most important medicinal plants in Yemen, which did not receive the researchers' attention, are Myrtus communis L. and Flemingia grahamiana Wight & Arn.

Myrtus communis L. belongs to the Myrtaceae family, including 145 genera and about 5500 species. It is an evergreen shrub or small tree, 1.8–2.4 m in height 5.

A striking advantage of the plant is the enjoyable smell of essential oil, present in many glands, mostly in the leaves 6. Myrtus communis one of the important medicinal and aromatic species from the Myrtaceae family, is used traditionally in Saudi Arabia and Yemen to treat fevers, coughs, headaches, and dough of leaves to blisters and sores 7. Leaves and berries are still largely used in cosmetic fields, food and pharmaceutical industries 8, 9.

Flemingia grahamiana Wight & Arn. L belongs to the Fabaceae family; the genus Flemingia has about 42 species. It is a perennial shrub that usually has many branches, which are widely found in mountain slopes and forests of India, Laos, Vietnam, Myanmar, Africa, and Yemen between 900–1600 m altitudes. It is domestic in African 10. The species of the genus Flemingia have been used as a traditional medicine in various Asian communities. It’s used in the treatment of stomach ache, helminthiasis, ulcer, epilepsy, hysteria, insomnia, cataract, rheumatism, and thereby relieve pain 11, 12. The pods of F. grahamiana covered with red powder yield Warrus Fig. 1. The Warrus is a purplish resinous powder a little similar to “kamala” powder from (Mallotus philippensis Muell. Arg.). It is used in dyeing silk and to a lesser extent wool. In Arabia, warrus is applied as a cosmetic, skin disease, anthelmintic, and treatment for cough and chills 13.

In this study, we report the antibacterial activities of methanolic and aqueous extracts of Yemen plants, Myrtus communis L. (leaves) and Flemingia grahamiana Wight & Arn (pods Warrus), against some Pathogenic bacteria, in Aurangabad city, India. 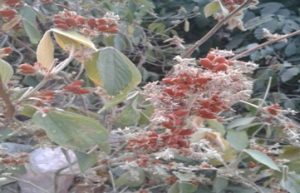 Preparation of the Extracts: The leaves of M. communis and pods of F. grahamiana were dried under the shadow and left for two weeks. When the leaves were dried, they were crushed to powder. The dried pods of F. grahamiana were rubbed and gently shake, to denude them of their outer hairy covering and get powder Warrus Fig. 1. The powder of leaves and Warrus were preserved in bottles at 4 °C. Methanol and Aqueous extracts were accomplished according to established protocols 14.

Methanol Extract: About 50 g of leaves of M. communis and Warrus powder of F. grahamiana were extracted with 500 ml methanol at 50-55°C by a Soxhlet device until the extract's color disappeared. The solvent was evaporated by a rotary evaporator, then transferred to an incubator at 40 °C for 24 h to get a dry mass. It was weighed and kept in a refrigerator in dark-colored bottles.

Aqueous Extract: 50 g of dry plant powder was taken in a beaker, 500 ml of distilled water was added. The mixture was stirred by a magnetic stirrer for 24 h. The mixture was clarified by filtration and then subjected to evaporation and kept in a refrigerator, until use.

Antibacterial Assay: Bacterial suspensions were prepared and adjusted to 0.5 McFarland turbidity standard solution. Agar well diffusion method was used to evaluate the antibacterial activity of plant extracts according to 16. Methanol and water extracts were dissolved in 50% methanol and in distilled water, respectively, to get final concen-trations (25, 50, 75, 100 mg/ml). Nutrient agar plates were prepared, allowed to solidify, and 50 µl of bacterial suspensions were seeded on the surfaces of these plates using cotton swabs.

Wells of 8 mm in diameter were bored on the agar using a sterile cork borer (6 wells in each plate). 100 µl of extracts were introduced into the wells (2.5, 5, 7.5, and 10mg/well). Antibiotic Strepto-mycin (100 μg/well) was used as Positive control and 50% methanol or distilled water as a negative control.  The plates were then incubated at 37 ℃ for 18 h.  The experiment was executed in triplicate, and the diameters of the inhibition zones were measured.

Minimum Inhibitory Concentration (MIC): MIC was evaluated by the classical double dilution method in Nutrient broth 17. A series of different concentrations for methanol and water extracts were prepared (ranging from 25 mg/ml to 0.781 mg/ml). The MIC knows as the lowest concentration of extract that resulted in no apparent growth after 24 h incubation at 37 °C.

Phytochemical Analysis: Phytochemical screening of methanolic and aqueous extracts of M. communis (leaves) and F. grahamiana (Warrus powder), showed the presence of different bioactive compounds Table 1. Tannins, glycosides, flavonoids, steroids, and phenolic were present in all extracts of M. communis and F. grahamiana. Alkaloids which was not present on the Aqueous extract of F. grahamiana and M. communis. The medicinal plants contain different secondary metabolites such as flavonoids, phenols, alkaloids, tannins, and they have effective inhibitory potency against the tested pathogenic bacterial isolates 18. Secondary metabolites cause damage to the cell membrane, leakage the materials into the cell which leading to microorganism's death 19.

Antibacterial Activity: Most of the concentrations for the methanolic and aqueous extracts of M. communis (leaves) and F. grahamiana (Warrus powder) showed different degrees of antibacterial activity against most bacterial strains tested. The diameter of the inhibition zones increased with increasing extracts concentrations Table 2, 3, Fig. 2, 3, 4, 5. Four concentration for each extract (2.5, 5, 7.5, and 10 mg/well) were used.

MIC was tested at various concentrations from 25 mg/ml to 0.781 mg/ml for all the plant extracts. M. communis extracts showed activities against all the test bacteria with MIC values of 0.781for all isolates except E. coli with MIC value of 1.563 mg/ ml Table 4.

In a previous study, The MIC values of myrtle against different microorganisms in the range of 12.5 to 25 mg DM/mL was recorded 19. And In another study, MIC was 0.5 mg/ml to 45 mg/ml. These results showed the strong antibacterial activity of Myrtle plant 20.

On the other hand, F. grahamiana (Warrus powder) extracts produced the highest inhibition zones at 10 mg/Well concentration. The methanolic extract showed 25.7, 21.9, 20, and 15 mm against S. aureus, MARS, P. aerunginosa, and P. mirabilis, respectively. Also, the aqueous extract showed 22.6, 18.3, 14.5, and 13.6 mm against MARS, S. aureus, P. aerunginosa, and P. mirabilis, respectively. It was observed that the methanolic extract showed higher inhibition zones than the aqueous extract, and this may be attributed to the phytochemical compounds, which are more soluble in the alcohol extract. Also, K. pneumonia and E. coli were resistant to the extracts of F. grahamiana Table 3.

MIC values for F. grahamiana methanolic extract was 0.781mg/ml for S. aureus and MRSA, and for the other bacteria, MIC values was1.56 mg/ ml. K. pneumonia and E. coli were not tested because the extracts have not activities against them. MIC value of aqueous extract of F. grahamiana was 1.56 mg/ml for S. aureus, P. aerunginosa, and P. mirabilis and 0.781 mg/ml for MRSA Table 4. There is only one research paper that reported the activity of Flemingia grahamiana in which several extracts of Flemingia's leaves were only active against Staphylococcus aureus 22, and this is may be attributed to the reason is the scarcity of this plant in the World.

Also, there are several studies about genus Flemingia. According to 12, the compounds of Flemingia paniculata showed significant activities against all the tested bacteria with MIC values in the range of 1.57–200 µg/mL. In another study, all extracts of F. vestita exhibited antimicrobial activity against B. subtilis, S. dysentriae, and E. coli 23. Also, Flemingia flavanone has antimicrobial activity against Gram-positive (S. aureus, S. epidermidis and MRSA), Gram-negative bacteria (P. aeruginosa, and E. coli) 24. Flemingia strobilifera was studied for its antimicrobial and antioxidant activities 25.

CONCLUSION: The results of the present study showed that the Yemeni traditional medicinal plants M. communis and F. grahamiana have potent antibacterial activity for each methanolic and aqueous extracts. These plant extracts possess some phytochemicals compounds. The studied plants need more pharmacological evaluation and isolation of their active compounds that may be tested and developed to new drugs for the treatment of infectious diseases.

ACKNOWLEDGEMENT: Authors are thankful to the dean of the Faculty of Pharmacy, and Dr. Sabur Khan, assistant professor, Department of Pharmacognosy, Pharmacy College, Maulana Azad College, Aurangabad, India, for providing laboratory facilities to do this work.