IN VITRO ANTIBACTERIAL ACTIVITY AND CALLUOGENESIS OF BRYONIA LACINIOSA

IN VITRO ANTIBACTERIAL ACTIVITY AND CALLUOGENESIS OF BRYONIA LACINIOSA

ABSTRACT: Interest in medicinal plant as a re-emerging health aid has been fuelled by the rising cost of prescription drug in the maintenance of personal health. In present work an attempt has been made to carry out antimicrobial activity of bryonia laciniosa plant, used in Indian folk medicine. The aim of the study was to grow in vitro callus from bryonia laciniosa from leaf explants and its microbial activity. Antibacterial effect of Bryonia laciniosa was evaluated on bacterial strains like Bacillus cereus, Staphylococcus aureus, Enterobacter aerogenes, Escherichia coli and Klebsiella pneumoniae. The solvents used for the extraction of plants were water and methanol. The in vitro antibacterial activity was performed by agar disc diffusion. The most susceptible bacteria was K. pneumoniae. The extracts of callus and plant material could not inhibit any of the bacterial strains investigated. Callus was induced from leaf explants in Murashige and Skoog (MS) medium supplemented with different combinations of auxin and cytokinin growth regulators.  The Callus was induced in MS medium with 2, 4-D (3mg/l) and kinetin (1mg/l) showing Greenish yellow callus, but the callus induced in MS medium with 2, 4-D (3mg/l) and BAP (3mg/l) was brown in colour. The results obtained in the present study suggest that Bryonia laciniosa can be used in treating diseases caused by the test organisms and for production of mass number of plants. This type of work was conducted first time in India.

INTRODUCTION:Over 50% of all modern clinical drugs are of natural product origin 1 and natural products play an important role in drug development programs in the pharmaceutical industry 2. There has been a revival of interest in herbal medicines.

This is due to increased awareness of the limited ability of synthetic pharmaceutical products to control major diseases and the need to discover new molecular structures as lead compounds from the plant kingdom. Plants are the basic source of knowledge of modern medicine.

The basic molecular and active structures for synthetic fields are provided by rich natural sources. This burgeoning worldwide interest in medicinal plants reflects recognition of the validity of many traditional claims regarding the value of natural products in health care.

The relatively lower incidence of adverse reactions to plant preparations compared to modern conventional pharmaceuticals, coupled with their reduced cost, is encouraging both the consuming public and national health care institutions to consider plant medicines as alternatives to synthetic drugs. Plants with possible antimicrobial activity should be done on ethanomedicinal plants in India 3, 4, 5.

Interest in a large number of traditional natural products has increased 6. During the last few years, rapid and large scale propagation of medicinal plant has been significantly increased using the micropropagation techniques. Micropropagation is an alternative to the conventional method of vegetative propagation with the objective of enhancing the rate of multiplication.

Since medicinal and pesticidal plants are now being overexploited from natural population and thereby leading to a depletion of plant resources. Therefore, it is important to develop a protocol for its multiplication through micropropagation of this highly valuable medicinal plant.

Aqueous extraction: 10 g of air-dried powder was added to distilled water and boiled on slow heat for 2 h. It was then filtered through 8 layers of muslin cloth and centrifuged at 5000g for 10 min. The supernatant was collected. This procedure was repeated twice. After 6 hours, the supernatant collected at an interval of every 2 hours was pooled together and concentrated to make the final volume one-fourth of the original volume7. It was then autoclaved at 121oC and at 15 lbs pressure and stored at 4oC.

Methanol extraction: 10 g of air-dried powder was taken in 100 ml of methanol in a conical flask, plugged with cotton wool and then kept on a rotary shaker at 190-220 rpm for 24 h. After 24 hours the supernatant was collected and the solvent was evaporated to make the final volume one fourth of the original volume and stored at 4oC in airtight bottles.

Media Preparation and Antibacterial Activity: The antimicrobial assay was performed by methods viz. agar disc diffusion method. The molten Mueller Hinton agar was inoculated with 100 µl of the inoculum (1 x 108 cfu/ml) and poured into the Petri plate (Hi-media). For agar disc diffusion method, the disc (0.7 cm) (Hi-Media) was saturated with 100 µl of the test compound, allowed to dry and was introduced on the upper layer of the seeded agar plate. 100 µl of the test compound was introduced into the well.

The plates were incubated overnight at 37oC. Microbial growth was determined by measuring the diameter of zone of inhibition. For each bacterial strain, controls were maintained where pure solvents were used instead of the extract. The result was obtained by measuring the zone diameter. The experiment was done three times and the mean values are presented.

Callus induction: Leaf of the Bryonia lacinosa were used as explants. Explants were surface sterilized with 70% alcohol and 0.1%mercuric chloride and then washed with sterile distilled water to remove traces of mercuric chloride. The leaf were then placed on MS medium 8 containing 3% sucrose, 0.8% agar supplemented with various concentrations of Auxins and cytokinins growth regulators, namely 2,4-D and Kin (1-4mg/l) were added individually or in combinations. The pH of the medium was adjusted to 5.7 before gelling with agar and autoclaved at 121oc for 30 minutes. All the cultures tubes were plugged with Aluminium foil and were incubated in growth room at temperature of 24+2oC and relative humidity 70+5%, a photoperiod from cool white florescent tubes giving 2000 lux at culture level. The cultures were maintained by regular subculture at 6 week intervals on fresh medium with the same composition. Growth parameters of callus were recorded at an interval of `15 days from the date of inoculation.

RESULTS AND DISCUSSION: The antibacterial activity of Bryonia laciniosa leaf and callus extract of both solvent (aq./meth.) against Bacillus cereus, Staphylococcus aureus, Enterobacter aerogenes, Escherichia coli and Klebsiella pneumoniae is shown in Table 1. The aqueous Extract of callus showed considerable more activity than methanol extract. Maximum antibacterial activity of callus was shown against Klebsiella pneumoniae. Neither the extract was able to inhibit the K. pneumonia. Similar results were also reported by Venkatesan et al. 9, Prescott et al.10 and Stainer et al.11, who reported diseases such as pneumonia, urinary and respiratory tract infection.

TABLE 1: ZONE OF INHIBITION (MM) OF BACTERIAL GROWTH ON AQUEOUS AND METHANOL EXTRACT OF BRYONIA BY DISC DIFFUSION METHOD

Fig. 1 showed the significant antibacterial activity of the bryonia laciniosa was comparable to the standard antimicrobial Gentamycin (100ug/disc) and Streptomycin (100ug/disc). The Enterobacter aerogenes showed mor amount of zone in aqueous extract as compare to methanol extract in callus  however Escherichia coli was foundsensitive to Aqueous and Methanol in callus as well as plant extract.

For the growth of Bryonia callus culture different composition and combination of growth regulators were tested. Kinetin, Benzyl amino purine and 2, 4-D and 2, 4-D with Kin and BAP were tested (Table 2). 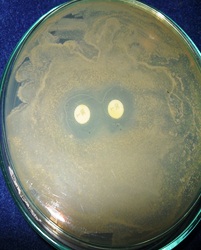 2, 4-D alone shows proliferation and friable callus which turn into more friable callus after sub culturing, but growth was very slow. 2, 4-D and Kin are known to trigger the stimulation of embryogenic determined cell to undergo cell division in many plant species 12, 13.

The effect of 2, 4-D and Kin on callus initiation and maintenance so observed will be helpful and attempts can be made to assay the concentration of bioactive molecules as this plant is rich in bioactive molecules Desired secondary metabolites can be manipulated as conditions required from the callus. It can be precisely controlled and cell culture and organ culture can be done. 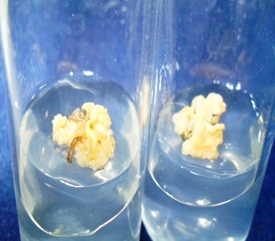 The potential for developing antimicrobials from higher plants appears rewarding as it will lead to the development of a phytomedicine to act against microbes. Plant-based antimicrobials have enormous therapeutic potential as they can serve the purpose with lesser side effects that are often associated with synthetic antimicrobials 14.

Continued further exploration of plant- derived antimicrobials is needed today. Further research is necessary to determine the identity of the antibacterial compounds from within these plants and also to determine their full spectrum of efficacy. However, the present study of in vitro antimicrobial evaluation of some plants forms a primary platform for further phytochemical and pharmacological studies

CONCLUSION: Bryonia laciniosa extracts possess a broad spectrum of activity against a panel of bacteria responsible for the most common bacterial diseases. These promissory extracts open the possibility of finding new clinically effective antibacterial compounds. A simple and efficient protocol for callus induction and has the potential to be used as a model system in an attempt to genetic transformation. This was the first report on tissue culture studies of Bryonia laciniosa in India.

13  Supe, U: Effect of growth regulator on callus induction of Bryonia lacinosa. International journal of applied biotechnology and Biochemistry. 2011;1(4): 449-452.