ABSTRACT: Antimicrobial drug resistance is one of the major threats due to the wide usage of broad-spectrum antimicrobial drugs in the general population. The present study was undertaken to investigate the antibacterial potential of Alternanthera philoxeroides methanolic extract (APME) against multidrug-resistant UTI pathogens. The preliminary phytochemical screening of the extract showed the presence of carbohydrates, amino acids, proteins, alkaloids, glycosides, steroids, flavonoids, tannins, and phenolic compounds. The quantitative estimation of total phenolic, tannin, and flavonoid contents was determined for the crude extract of APME through standard curves of gallic acid and rutin. The phenolic content of APME was found to be 12.4 mg of gallic acid equivalent (GAE)/g of extract. The tannin content was found to be 5.6 mg of GAE/g of extract, whereas the flavonoid content was found to be 3.2 mg of rutin/g of extract. The antibacterial potential of the extract was observed as maximum against Staphylococcus saprophyticus, moderate against Escherichia coli and Proteus vulgaris, and minimum against Proteus mirabilis. The minimum inhibitory concentration was ranged from 12.5 to 25 mg/ml. The Alternanthera philoxeroides were found to contain some bioactive compounds with pronounced antibacterial activity, therefore further phytochemical studies and their characterization should be needed to isolate the active constituents and evaluate the antimicrobial activities against a wide range of microbial pathogens.

INTRODUCTION: Infectious diseases caused by pathogenic microorganisms are a major threat to public health worldwide 1. Urinary tract infection is one of the most common bacterial infections in community practice. In the present scenario, the antimicrobial resistance of major uropathogens is on rise.

Hence, the treatment of UTI infections became difficult to even several potent antibiotics are available. The uncontrolled and improper use of multiple antibiotics results in the development of antimicrobial resistance. Several herbal extracts were reported for their antimicrobial activity 2. Many plants have been found to be effective against respiratory, gastrointestinal, cutaneous, and urinary tract infections. Plants are a rich source of secondary metabolites such as alkaloids, tannins, and flavonoids, which have been found to possess antimicrobial properties 3.

The phenomenon of antibiotic resistance exhibited by the pathogenic microorganisms has led to screening several medicinal plants for their potential antimicrobial activity. In view of a growing problem with drug resistance of UTIs, the present study was undertaken with an objective to find more efficient antibacterial agents of plant origin and selected a green leafy vegetable Alternanthera philoxeroides (Mart.) Griseb.

Traditionally, the plant possesses various curative properties. Young shoot paste with black pepper is prescribed to cure acute cough. Leaves with a pinch of salt are orally administered to cure intestinal worms. It is also used as an aquarium plant.

Plant Material: The plant Alternanthera philoxeroides were collected from fields in and around Guntur, Andhra Pradesh, India. The taxonomic identity was confirmed at the Botanical Survey of India, Ministry of Environment & Forests, Government of India, Southern Regional Centre, Coimbatore (Ref No. BSI/SRC/5/23/2013-14/Tech./1990).

These microorganisms were isolated from urine samples of UTI infected patients. The number of isolates for each microorganism was mentioned in Table 1.

TABLE 1: LIST OF CLINICAL ISOLATES OF MICRO-ORGANISMS USED IN THE STUDY

Preparation of Plant Extract: The healthy leaves were shade dried and powdered to a coarse powder. The phytoconstituents present in the leaves were extracted by cold maceration process 10. The powder of 1 kg was suspended in 1 L methanol and incubated in an orbital shaker for 3 days. The extract was filtered through 5 layers of muslin cloth, and the process was repeated twice. The collected extract was pooled, concentrated by evaporation, and labeled as APME.

Determination of Total Phenolic Content: The total phenolic content was determined using Folin Ciocalteau reagent. A standard calibration curve was prepared, and the Optical Density against a concentration of tannins at 725 nm was estimated spectrophotometrically. Gallic acid was used as a standard and the total phenolic content was expressed as µg/ml GAE. Concentration of 0.01, 0.02, 0.03, 0.04 and 0.05 mg/ml of gallic acid were prepared in methanol. Concentration of 1mg/ml of plant extract was prepared in methanol and 0.5 ml of each sample were introduced into test tubes and mixed with 0.5ml of a 1N dilute Folin-Ciocalteau reagent and 2.5 ml of 20% sodium carbonate. The tubes were covered with parafilm and allowed to stand for 40 min at room temperature, and OD was read at 725 nm spectrophotometrically 13.

Determination of Tannin Content: Tannin content was determined using insoluble polyvinyl-polypyrrolidone (PVPP), which binds tannins 14. Briefly 1 ml of extract (1 mg/ml) in which the total phenolics was determined was mixed with 100 mg of PVPP, vortexed, kept for 15 min at 4 °C and then centrifuged. In the clear supernatant, non-tannin phenolics were determined the same way as that of total phenolics. Tannin content was calculated as a difference between total and non-tannin phenolic content.

Determination of Flavonoid Content: 0.5 mL of diluted extracts were added to test tubes and mixed with 0.1 ml of 10% ammonium nitrite, 0.1 ml of 1 M aqueous potassium acetate and 4.3 ml of methanol. After incubating for 40 min at room temperature, the absorbance was measured at 415 nm. Rutin was used as a standard compound in the range of 2-12 mg/ml concentration to construct a standard curve.

The test antibiotic (1% w/v) of 100 µL was added in the first row wells and other wells filled with 50 µL of sterile nutrient broth medium. The antibiotic solution was serially diluted by transferring 50 µL to the next well and so on so that all wells contained 50 µL. Then 10 µL of respective bacterial suspension and finally 30 µL of resazurin (0.02%) were added. The experiment was set with positive control a column with all the solutions except antibiotic and negative control a column with sterile nutrient broth except antibiotic solution and bacterial suspension.  The plates were covered and incubated at 37 °C for 24 h. After incubation observes the color change as from blue to pink indicates a positive response. Resazurin, which is blue in the oxidized state, turns pink when reduced by viable cells.

The least concentration where the colour change was observed was noted as the inhibitory concentration of antibiotics with respect to the bacterial strain and is represented as drug resistance concentration exhibited by microbial strain.

Agar Well Diffusion Assay: The antibacterial screening of APME was tested using agar well diffusion on solid media 16, 17. The inoculums (1 × 108 CFU/ml) were spread on Mueller Hinton agar medium using sterile swabs. The inoculated agar medium was punched with 6 mm diameter wells. The wells were filled with different concentrations of the extract (500, 750, 1000 µg/ml). The activity was compared with positive (Nitrofurantoin, 300 µg/disc) and negative (DMSO) controls. The plates were incubated in an upright position at 37 °C for 24 h. After incubation, the zone of growth inhibition was measured.

Determination of Minimum Inhibitory Concentration (MIC) by Micro-Broth Dilution: The minimum inhibitory concentrations (MIC) of extracts were determined by the micro-broth dilution method using resazurin indicator 18, 19. The extract of 100 µL (10% w/v) was added in the first row wells and other wells filled with 50 µL of sterile nutrient broth. Transfer 50 µL of test material to the next well so that all wells contain 50 µL and for serial dilution. 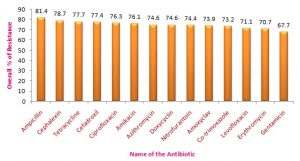 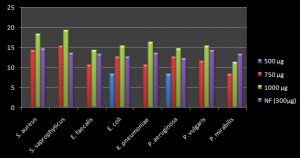 FIG. 5: ANTIBACTERIAL SCREENING OF APME AND NF AGAINST CLINICAL ISOLATES OF UTI PATHOGENS 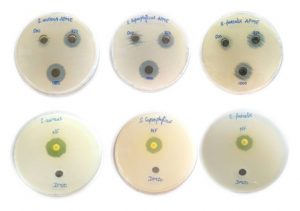 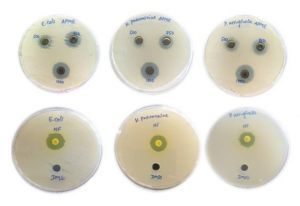 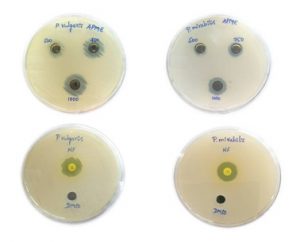 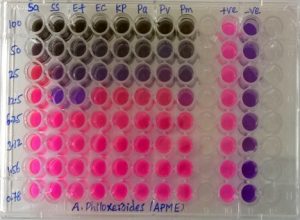 DISCUSSION: The preliminary phytochemical screening of APME revealed the presence of various constituents. The extract showed the presence of carbohydrates, amino acids, proteins, alkaloids, glycosides, steroids, flavonoids, tannins, and phenolic compounds and they were shown in Table 2.

The quantitative estimation of total phenolic, tannin, and flavonoid contents was determined for APME through standard curves of gallic acid and rutin.

The results obtained were comparable with zones of inhibition produced by standard drug, Nitrofurantoin (300 µg/disc), which is a drug of choice for urinary tract infections. It showed high inhibition against S. aureus, P. vulgaris > S. saprophyticus, K. pneumoniae > E.f aecalis & P. mirabilis > P. aeruginosa and E. coli. The results were reported in Table 4, Fig. 5, 6, 7 and 8.

The Minimum Inhibitory Concentration (MIC) values of APME were noted between 12.5 to 25 mg/ml. It was observed that S. saprophyticus, E. faecalis was inhibited 12.5 mg/ml whereas S. aureus, E. coli, K. pneumoniae, P. aeruginosa, P. vulgaris and P. mirabilis at 25 mg/ml. The results were reported in Table 5 and Fig. 9.

CONCLUSION:  The present study concludes that the APME showed potent antibacterial efficacy against one or more clinical isolates of UTI pathogens. The plant requires extensive investi-gation to identify the antibacterial principles which may act as accessible alternatives to synthetic antibiotics.

ACKNOWLEDGEMENT: The authors are thankful to the management of Vignan Pharmacy College, Vadlamudi, for providing facilities to carry out this research.