ABSTRACT: Cassia sieberiana and Khaya grandifoliola are two plants from Ivorian traditional pharmacopoeia. In this study, we have compared in vitro antibacterial potential of glycosidic and aglyconic crude extracts from both plant species against 3 reference bacterial strains (Escherichia coli ATCC 25922, Pseudomonas aeruginosa 27853, Staphylococcus aureus ATCC 25923)  and 4 others clinical (Proteus mirabilis, Salmonella sp, Shigella sp, Vibrio cholerae) isolated from pathological specimen at hospital. The results have revealed on all tested bacteria, a clear antibacterial potential of aglycones compared to glycosides. Indeed, at same concentrations, total aglycones of each plant have inhibition zones more extensive than their corresponding glycosides, and their MIC are clearly lower against bacterial strains. Moreover, we note that the aglycones are active against Escherichia coli ATCC 25922 and Pseudomonas aeruginosa 27853 while when the glycosides are inactive. This suggests that in the glycoside, the sugar moiety inhibits the antibacterial action.

INTRODUCTION: The discovery and the use of antibiotics are the cause of the greatest success of modern medicine. Today, the emergence and the spread of multi resistance bacteria to antibiotics in human populations have become a very worrying public health 1. In sub-Saharan Africa, and particularly in Côte d’Ivoire, many cases of multi resistance to antibiotics have been reported 2. Faced with proven bacterial antibioresistance, it is urgent to explore various potential strategies that could lead to the discovery of new families of more effective and less expensive antibiotics.

Although combinatorial chemistry techniques have succeeded as methods of optimizing structures and have been used very successfully in the optimization of many recently approved agents, the utility of natural products as sources of novel structures, but not necessarily the final drug entity, is still alive and well 3.

The study of secondary metabolites from plant species in the search for new therapies to counter the bacterial antibioresitance, is an interesting strategy and is topicality. Therefore, we are interested in Cassia sieberiana and Khaya grandifoliola, two medicinal plants commonly used in traditional therapy in Côte d’Ivoire, which according to some ethno pharmacological informations, collected from healers, treat bacterial diseases. Both plants have been subject of some studies 4-12. However, for biological as much as phytochemical works on root bark and trunk bark respectively, C. sieberiana and K. grandifoliola are poorly documented. Our study reports a comparative investigation of in vitro antibacterial activity of glycosides and aglycones crude extracts obtained from C. sieberiana and K. grandifoliola against bacterial strains.

All chemicals used were of analytical grade.

Cassia sieberiana root bark and Khaya grandifoliola trunk bark were collected from Vavoua, a town in central-western of Côte d’Ivoire. They were authenticated at the Centre National de Floristique (CNF) at the University Félix Houphouët-Boigny (Côte d’Ivoire) by Professor Laurent AKE-ASSI, an emeritus botanist. Fresh drugs were dried in the open air under cover the sun for 30 days, then cut and pounded in a mortar and then sieved. The plant powders obtained were sampled and subjected to extraction to give the crude extracts to be analyzed.

Preparation of the glycosidic crude extracts:

A decoction of 250 g of plant powder is carried out in 500 ml of distilled water for 30 min. After filtration, the decoction was concentrated in a rotary evaporator under reduced pressure. The concentrate is then dried in a sterilizer (50° C) for 72 hours to give the glycosidic crude extracts encoded CS1 (for C. sieberiana) and KG1 (for K. grandifoliola).

Preparation of the aglyconic crude extracts:

150 g of plant powder introduced into 500 ml of HCl (2N) were heated at reflux for 40 min. After cooling and filtration, the aglycones are extracted by ethyl acetate. The organic phase is dried over anhydrous MgSO4, and then concentrated to dryness in a rotary evaporator to give the aglyconic crude extracts identified CS2 (for C. sieberiana) and KG2 (for K. grandifoliola).

The tests were performed in vitro at the Institut Pasteur (IP) of Côte d’Ivoire, against 3 reference bacterial strains and 4 clinical isolates, which were provided by the laboratory of Bacteriology-Virology of IP. The reference antibiotics (BIOMEDIS) used as positive control, were analytical grade (Table 1).

Sensitivity tests: Inhibition of in vitro bacterial growth by CS1, CS2 KG1, and KG2 was performed by the agar diffusion method 13. The Mueller-Hinton (MH) agar plastes were seeded by flooding with standardized suspension of the bacterial test. Using a sterile pipette, the wells of 6 mm in diameter, were cut into the agar. Each well received 80µl of plant extract at various concentrations (200, 100, 50, 25mg/ml). After 30 min of diffusion at room temperature, the plastes were incubated at 37°C for 18 to 24 hours. The antibacterial potential was evaluated by measuring with a caliper, the diameter of the bacterial inhibition zone.

To determine the MIC and MBC, tests were performed according to the method of broth dilution. The range of concentrations of CS1, CS2, KG1, and KG2 was prepared in the 9 test tubes which were seeded volume/volume with the inoculum adjusted to 0, 5 Mc Farland (106 cells/ml). The extract concentrations varied from two to one, that is to say, for concentrations of 200 to 0.78 mg/ml, respectively, were obtained from 100 to 0.39 mg/ml. The sterility control received 2 volumes of MH broth. All test tubes are incubated in an incubator (37°C) for 18 hours 14, 15.

The MIC is the lowest concentration of extract producing a complete inhibition of bacterial growth appreciable to the naked eye after the incubation time.

Minimum Bactericidal Concentration (MBC): Agar medium Muller-Hinton cast Petri dish is inoculated by parallel ridges with 10µl inoculum from the tubes showing no visible growth in the MIC determination. The MBC is the lowest concentration of extract which leaves more than 0.01% of surviving germs compared to a control without extract.

The in vitro antibacterial potential of CS1, CS2, KG1 and KG2 was evaluated by the agar diffusion method. The inhibition effect of these extracts on bacterial growth was tested against Gram (+) and Gram (-) bacteria. The antibacterial activity of each crude plant extract was assessed by measuring the diameter of the bacterial inhibition zone formed around each extract. The obtained results are shown in Fig.1-7. 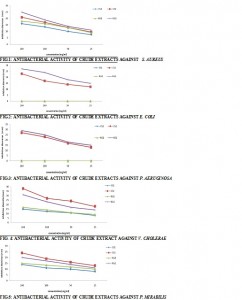 The Fig. 1-7 show that the bacterial inhibition zones increased with the concentration of crude plant extracts. This suggests that our crude extracts inhibit bacterial growth in a dose-response relationship. Furthermore, with the exception of E. coli and P. aeruginosa, the zones of inhibition generated by CS1 and KG1 on other tested bacteria, demonstrate their effectiveness. The measured diameters of inhibition range from 7.5 (CS1 to 25mg/ml of S. aureus) to 38mm (CS2 to 200 mg/ml of V. cholerae); which is clearly significant. E. coli and P. aeruginosa are resistant opposite K. grandifoliola while a study conducted in 2013 reported that they are sensitive against methanolic extracts of this plant 16. Indeed, the method and the solvent of extraction had a big influence on biological activity of plant extracts 17.

In aqueous medium, we observed a progressive decrease in the intensity of the disturbance induced by the growth of bacteria with increasing the concentration of the plant extract; illustrating a dose-dependence of the turbidity of the culture medium. The determined values of MIC and MBC are reported in the Table 2.

These antibacterial parameters allowed one hand to confirm, quantify and compare the activities; and secondly, to characterize the nature of the effect shown by a plant crude extract on a given bacterium. According to Marmonier’s method 18 that a substance is bactericidal if CMB/MIC ≤ 4, and bacteriostatic if CMB/MIC> 4, we have clarified CS1, CS2, KG1 and KG2 action’s mode. All tested bacterial strains showed different sensitivities against CS1, CS2, KG1 and KG2 (Table 2). By analyzing the Table 2, V. cholerae is the most sensitive. As for P. mirabilis, it is the least sensitive. CS1 gives higher MIC. However, CS2 sign smaller MIC.

The glycosidic crude extract of K. grandifoliola gives MIC at 6.25mg/ml against S. aureus, 25 mg/ml against P. mirabilis, 50mg/ml against Salmonella sp., 25mg/ml against Shigella sp. and 6.25 mg/ml against V. cholerae as its aglyconic extract induced lower CMI (1.56mg/ml, 3.12mg/ml, 1.56mg/ml, 3.12mg/ml, 0.78mg/ml against the same bacteria respectively) (Table 2). All These MIC indicate clearly that crude extracts of aglycones are more effective than crude extracts of glycosides. It is well what we observed in solid medium. Ultimately, the MIC values (Table 2) generally coincide with those of the diameters of inhibition of bacterial growth (Fig. 1-7). Indeed, the extracts which have induced a large zone of bacterial inhibition, have smaller MIC against the corresponding bacterial strains. Similar reasoning with CMB, led us to the same conclusion. Studies have shown antibacterial action of aglycones 19.

Through this study, we contribute to show that in reality, microorganisms are more sensitive to aglycones as glycosides. The aglycones appear to be better indicated for the treatment of bacterial infections. The tested bacteria Gram (+) and Gram (-) indicate that the aglycones don’t act on the bacterial wall but rather to an internal mechanism. According to a study, these phytocompounds would be supposed to act on DNA, RNA or protein synthesis of bacteria 20. Our crude plant extracts possess antibacterial activity against all tested bacterial strains, except P. aeruginosa and E. coli. This activity is linked to the presence of secondary metabolites in these plants. Indeed, some authors reported that C. sieberiana and K. grandifoliola contain alkaloids, flavonoids, tannins and saponins 21, 22.

CONCLUSION: In this scientific investigation, we have demonstrated the antibacterial properties of Cassia sieberiana and Khaya grandifoliola, two Ivorian medicinal plants, comparing the antibacterial potential of their glycosidic and aglyconic crude extracts. The results indicated on the whole, the presence of active antibacterial phytosubstances in each plant. Bactericidal and bacteriostatic effects of such plants have been shown against the tested bacterial strains. What seems to justify their ethnopharmacological use in the treatment of some infectious diseases in Côte d’Ivoire.

The aglyconic crude extracts signed an antibacterial effect more pronounced than the glycosidic crude extracts. This report demonstrates that the sugar moieties inhibit antibacterial activity of the glycosides. Therefore, we have reason to suggest the acid hydrolysis of plant drugs before extraction as a means of improving or activation of their antibacterial properties; and why no general way to their pharmacological properties. The obtained results in this survey are among other additional steps needed to achieve a contribution in the enhancement of Cassia sieberiana and Khaya grandifoliola.