ABSTRACT: Support of the useful medicinal properties of different native plants has gained huge significance as they can be used as a substitute source of lead compounds in pharmacological industries to begin many modern-day problems such as drug resistance in microorganisms and non-specificity in chemotherapeutic agents. Amischophacelus axillaris is one such plant that has been widely used for medical purposes in traditional systems of medicine. Hence this work seeks to validate the anticancer property of ethyl acetate extract of the plant against the A549 cell line. Anticancer activity was studied using MTT assay, which showed that the isolated compound has IC50 values lower than that standard Doxorubicin. At 50µg/mL concentration there is a lesser values, i.e., 10.47%. The results clearly revealed that the isolated pure compound from crude ethyl acetate extract from column chromatography of Amischophacelus axillaris was more potent on the A549 cell line.

INTRODUCTION: One of the foremost health issues which plague developing countries alike is cancer. According to statistics, there are 2.5 million people affected by cancer, of which 8, 00,000 are new cancer cases, and this disease is known to be the cause of the death of 5,50,000 people each year 1. Modalities of treatment to undertake cancer include chemotherapy, radiation, and surgery, which are given as individual therapy or in combination. Due to the different drawbacks allied with these treatments, a search for new alternate, safe, and cost resourceful methods continues. Plants are a vast source of a variety of bioactive compounds, which make them candidates for various drug researches.

Plant derivatives and secondary metabolites are enriched with multiple biological properties play a very important role in curing numerous lethal diseases 2. Hence the systematic study on the extraction of active molecules and the evaluation of their anticancer potential is the need of the hour.

Amischophacelus axillaris (L.) is a species that belongs to the family Commelinaceae, commonly called Negilu there in Kannada. It grows in monsoon forests, woodland, and wooded grassland. Traditionally considered febrifuge, anti-inflammatory, antiparasitic and antifungal property. In India, leaves are used for the treatment of tympanites and as food for pigs 3. The use of plant extracts is a very important property for antimicrobial activity and great significance in therapeutic treatments. A number of studies have been conducted to show such efficiency 4-7. In India, medicinal plants have been used among various populations to treat various diseases and have not been completely explored 8; therefore, the present study was undertaken. Since this plant with novel bioactive compounds has been proven to show promising therapeutic and pharmacological applications, the current study was undertaken to find out the potential of Amischophacelus axillaris (L.) on the survival of cervical cancer A549 cell line.

Collection and Identification Plant Material: Amischophacelus axillaris (L.) leaves were collected in the month of July-August in the Agumbe region, Shimoga district, Karnataka. The plant was authenticated and deposited in the Department of Botany, Kuvempu University, Shanakaragatta, with voucher number KUAB4688.

Processing and Extraction: The collected plant material was shade dried and coarsely pulverized. The pulverized plant material was subjected to the hot method of extraction using a soxhlet extractor. The extraction method was carried out using numerous solvents viz., pet ether, ethyl acetate, and ethanol per their increasing polarity. The obtained extract was filtered and evaporated in a rotary vacuum evaporator.

In-vitro Anticancer Activity: A549 cells were obtained from NCCS (Pune, India). A549 cells were cultured as monolayer in DMEM containing high glucose - 4.5 g/L, 4 mM glutamine, 3.7 g/L sodium bicarbonate, 25 mM sodium pyruvate and supplemented with 10 % heat-inactivated bovine serum, 100 U penicillin, and 100 μg/mL streptomycin. Cell lines were maintained in a humidified atmosphere of 95% air and 5% CO2 at 37oC. Cultured cells were passed 3 days once by trypsinization (0.25% trypsin containing 0.02% EDTA), and between passages 4 to 20 were considered for experiments.

The cellular viability was evaluated using an assay based on the cleavage of the yellow dye MTT to purple formazan crystals by dehydrogenase activity in mitochondria. Briefly, 5×103 of A549 cells were seeded in a 96-well plate, and after 24 h, cells were treated with separately either with compound (5µg, 10µg, 15µg, 20µg, 25µg, 30µg, 35µg, 40µg, 45µg, 50µg) and without compound (control) were incubated for 24 h. After 24 hours, cells were rinsed with media, and then they received MTT diluted in media for 3 h, and DMSO was used to dissolve the purple formazan crystals, and the optical density of the solution was measured at 570 and 690 nm. Based on the effect of compound A549, cell lines with maximum reduction in cell viability were chosen for further staining experimentation. Apart from the MTT assay, a portion of cells was subjected for tryphan blue staining (0.4%) using a haemocytometer to count the number of viable cells and dead cells 9.

RESULTS: The result of the MTT assay showing the percentage of cell viability for the ethyl acetate extracts of the leaves of Amischophacelus axillaris (L.) on the A549 cell line is shown in Table 1 and Fig. 2. The results also showed that isolated compounds have IC50 values lower than that of the positive control, with the best anticancer activity at the higher concentration 50 µg/ml; accordingly, these compounds may be considered anticancer agents for the treatment of lung cancer. 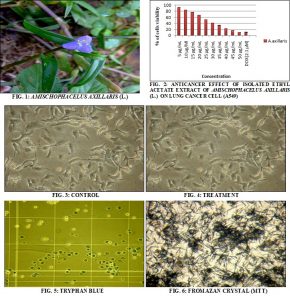 DISCUSSION: Amischophacelus axillaris (L.) has been shown to possess medicinal properties to cure a number of diseases. Till now, there are no studies on the anticancer activity of Amischophacelus axillaris (L.) on various cell lines. The current investigation evaluates the anticancer activity of ethyl acetate extracts of Amischophacelus axillaris (L.) on the A549 cell lines. Ethylacetate extract result presented in Table 1 and Fig. 2 revealed that the isolated compound has IC50 values lesser than that of positive control against A549 cell line with the best anticancer activity attributed 10.47% of cell inhibition at concentration 50µg/mL. Similar results have been carried out in many research work 10. Several reported that the cancer cells had undergone certain morphological changes, like cellular shrinkage and blebbing, which are characteristic features of apoptosis. These morphological changes are more observed in standard Doxorubicin (DOX) treated cells. At 50µg/mL the morphological changes are higher, followed by 40µg/ml concentration. Accordingly, this compound may be considered as a candidate anticancer agent for the treatment of lung cancer.

CONCLUSION: The present investigation revealed that Amischophacelus axillaris (L.) can act as a potential alternative remedy for lung cancer. The isolated pure compound from crude ethyl acetate extract of Amischophacelus axillaris (L.) can be used as an effective ingredient in drug recipe cancer. Further investigation is undertaken to identify the active compound behind the anticancer activity of the plant. The study in the future is to be extended to other cancer cell lines, and there is a need to carry out in vivo studies. Therefore, there is no doubt that this plant is a reservoir of potentially useful chemical compounds, which serve as drugs and provide modern drug discovery.

ACKNOWLEDGEMENT: The authors declare no acknowledgment.