ABSTRACT: In the present study, the various extracts viz aqueous, ethanol, chloroform and Petroleum ether of Biophytum sensitivum whole plant were evaluated for the anticancer activity against cancer cell lines. The cervical (Hela) and liver cancer (HepG2) cell lines were used to screen the in vitro anticancer challenging with the B.sensitivum extracts. Concentration ranges from 20 to 100 microgram of B.s crude extracts were screened against Hela and HepG2 cells. The antiproliferative activity of B.sensitivum were performed by 3-[ 4,5–Di methyl thiazol-2-yl]-2, 5-diphenyltetrazolium Bromide (MTT) assay. The cytotoxicity was highly significant in the ethanolic extract and chloroform extract than the aqueous and petroleum ether extract. The maximum non toxic concentration was observed at 150µg concentration of aqueous extract in the vero cell line.

INTRODUCTION: The research areas of cancer and infectious diseases possess a chief position on utilization of medicinal plants as a source of drug discovery. The FDA approved the 60-75% of drugs from natural origin such as medicinal plants were highly validated for anticancer and anti-infectious drugs 1. These drugs were considered for the chemotherapeutics in the cancer research from the discovery of natural drugs in chemoprevention 2, 3.

Globally huge number of plant species is screened and bioassayed for the drug discovery of various diseases worldwide 4, 10 million; half of these are in developed countries 5. Among the cancer patients in the USA the use of complementary and alternative medicine represented mainly by plants ranges between 30-75% 4. Medicinal plants from systematic screening programs or by serendipity   possess an important position in the drug discovery and many modern drugs have their origin in traditional medicine of different cultures.

Hence, despite the advantages of the synthetic and combinatorial chemistry as well as molecular modeling, medicinal plants remain an important source of new drugs, new drug leads and new chemical entities.

Biophytum sensitivum (B. sensitivum) is commonly called as Nagbeli. It  belongs to the family Oxalidaceae. It possess various pharmacological activities including protective effect on radiation-induced damage in mice 6, immunomodulatory activity 7 inhibition of tumor specific angiogenesis8, effect on cell mediated immune response in mice 9, chemo protective effect 10, anti-angiogenic effect 11, antioxidant potential 6, hypocholesterolemic,  anti-inflammatory activity 12. Further it is used in folk medicine against diabetes. Powdered dry leaves of the plant are a known traditional remedy for the treatment of Madhumeha’ (diabetes) 13. It is an annual herb that grows at the foothills of the Himalayas, around the inner Tarai region (east of Koshi river) in Eastern Nepal. However, the various bioactive phytochemical and diverse medicinal activities attributed to this plant, no Inhouse studies have been carried out to shed light on the role of this plant in cancers. In the light of the above, the current study was undertaken to investigate B. sensitivum crude extracts against the Liver cancer cell line (HEPG-2) and Cervical cancer cell line (HELA).

Plant Material: Biophytum sensitivum whole plants were collected from Coimbatore and Tiruchirapalli, Tamil Nadu. The whole plants were washed with sterile water, dried in shade, finely powdered & stored in 4°C until use.

Preparation of whole plant extracts Biophytum sensitivum: 10 gm of dried, finely grounded powder of Biophytum sensitivum powder was immersed in 200 ml of Ethanol, Chloroform, Petroleum ether and Aqueous extracted by souxlet apparatus extraction for 2 cycles. After extraction, the extract was lyophilised with alpha Christ lyophiliser. 100 Microgram of plant extract was dissolved in the 1 ml DMSO and then 1:3 dilution of test compound was prepared for MTT assay.

Cytotoxicity assay by MTT (3-[4,5-Dimethylthiazol-2-yl] - 2, 5- diphenyltetrazolium Bromide) assay: The monolayer cells was trypsinized and the cell count was adjusted to 1 lakhs cells/ ml using medium containing 10% newborn calf serum. Pre incubate cells at a concentration of 1× 106 cells/ml in culture medium for 3 h at 37°C and 6.5% CO2. The cells were seeded at a concentration of 5×104 cells/well in 100 µl culture medium and incubated at 37°C in 5% CO2 incubator for 24 hrs. After 24 hours, when the monolayer formed, the supernatant was flicked off and added previously diluted with media of 100µl of different concentrations of Biophytum sensitivum extracts in microtitre plates and kept for incubation at 37°C in 5% CO2 incubator for 72 hour and cells were periodically checked for granularity, shrinkage, swelling.

After 72 hour, the sample solution in wells was flicked off and 10µl of MTT dye was added to each well. The plates were gently shaken and incubated for 4 hours at 37°C in 5% CO2 incubator. The supernatant was removed and 100 µl of Dimethyl Sulfoxide (DMSO) was added and the plates were gently shaken to solubilise the formed formazan. The absorbance was measured using a microplate reader at 540 nm with a reference filter of 620 nm 14-17.

The percentage of cell growth inhibition or percentage cytotoxicity was calculated by following formula:

RESULTS: The Biophytum sensitivum (B.S) whole plant extracts were evaluated for the anticancer activity. The extract was screened against the cell line such as HELA, VERO & HEPG2. The Fig. 1 showed the MTT assay performed for antiproliferative activity VERO, HELA and HEPG2 cell lines. The VERO cell line is initiated from the kidney of a normal adult African green monkey. This cell line was screened to evaluate the cytotoxicity effect in normal cell line. The Liver cell line HEPG2 is the perpetual cell line which was derived from the liver tissue of a 15-year-old Caucasian American male with a well-differentiated hepatocellular carcinoma. 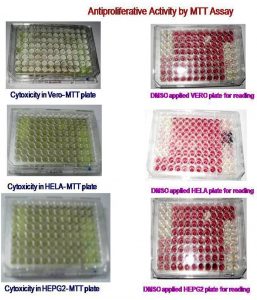 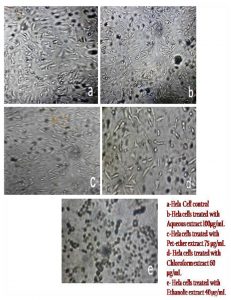 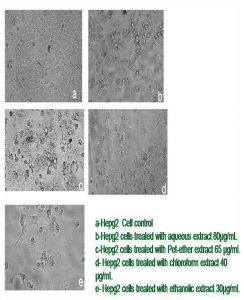 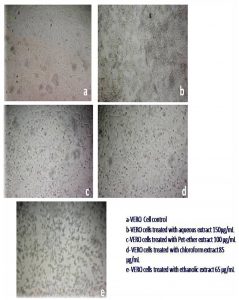 anticancer activity at minimum concentration at 40µg, Chloroform extract at 60μg, Petroleum ether at 75μg, and Aqueous extract at 100μg.

The cytotoxicity of Biophytum sensitivum extracts were screened at different time intervals viz, 12, 24 and 48 hrs. The ethanolic extract showed higher cytotoxicity in 12 hr interval than all the extracts. The cytotoxicity of ethanolic extract attains notable activity at dose dependent manner. The Chloroform extracts exhibited significant effect of anticancer activity than Petroleum ether and aqueous extract. The anticancer activity of different extracts of Biophytum sensitivum attains in the order of Ethanol< Chloroform < Petroleum ether < aqueous.

In VERO cell line, the antiproliferative activity of Biophytum sensitivum extracts were presented in the Fig. 4, 5. The minimum concentrations of anticancer activity in Biophytum sensitivum various extract were screened. The ethanolic extract posses anticancer activity at 65 μg as minimum concentration, chloroform extract attains 85 μg, Petroleum ether extract attains 100 μg. The normal cell line vero showed maximum nontoxic concentration upto 150 μg/mL in aqueous extract than other extracts. The ethanolic extract illustrates higher cytotoxicity in 12 hr interval and gradually increased at 48 hr interval in all the extract. But the cell viability was pronouncedly increased in the aqueous and petroleum ether extract for all the cell line at lower concentrations.

Finally the present study suggests that the ethanolic extract of B.s whole plant comprised novel anticancer compounds which will be potent therapeutic candidate for liver and cervical cancers. 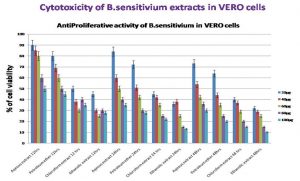 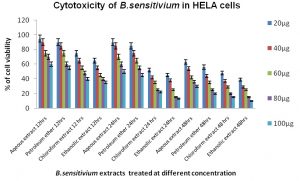 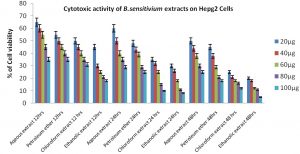 DISCUSSION: Many countries were started their own traditional plants for the treatment of cancer and related research. Plenty of work is currently explored for evaluating the drug potential of Chinese plants, especially used in Chinese traditional medicine. However, information about plants used in countries such as Africa, India, and Egypt etc traditional medicine is still scarce. But the Chinese ethnopharmacological knowledge has been passed on for thousands of years based on

written information, the traditional African and other countries medicine’s mode of transmission by word of mouth has hindered systematic scientific investigation 18. Hepatocellular carcinoma (HCC) is one of the most common malignancies, responsible for an estimated one million deaths annually 19.

Hemsleya amabilis is an herb widely growing in many parts of China. Hemsleya amabilis has been used in the treatment of many infectious illnesses. In recent years it has been used clinically to treat cancers and has been demonstrated an ability to greatly inhibit tumor development and growth with limited side effects 20. Similarly in the present study Biophytum sensitivum extracts were screened for the anticancer activities against liver and cervical cancer. The Hela and HEPG2 cells were used to study the anticancer activities. The ethanol, chloroform, petroleum ether and aqueous extracts were used for investigate the anticancer study.

The ethanolic and chloroform extracts possess the versatile anticancer activity in Hela and HEPG2 cells. Further there were many reports on the antidiabetic, immunomodulatory and wound healing activities but this is the first study the attempts were made to investigate the anticancer effects in Biophytum sensitivum.

A reduction in cell growth and an induction of cell death are two major means to inhibit tumor growth 21. Similarly the ethanolic and chloroform extract indicated the high reduction of cancer cells in liver and cervical cancer cell line. The lower concentration of the extracts demonstrates good cell viability against the Hela and Hepg2 cell monolayers. The Inhibitory concentration IC50 of the extracts illustrated the significant growth inhibition at 40 and 60µg concentration. Similar studies were demonstrated that S. barbata which could cause significant growth inhibition in A549 human lung cancer cell line at low concentrations, with IC50 at about 0.21 mg/ml. Cell death, due to necrosis (caused by cytotoxic effect) and apoptosis, was involved in S. barbata treatment.

The potent anticancer activites of Biophytum sensitivum is may due to the presence of active ingredient such as two biflavones, (cupressuflavone and amentoflavone) three flavonoids, (luteolin 7-Methyl ether, isoorinentin and 3-methoxyluteolin 7-O-glucoside) as well as two acids (4-caffeoylquinic acid and 5-caffeoylquinic acid) 8.