ABSTRACT: Alzheimer’s disease (AD) is a major type of dementia. AD is associated with memory impairment and cognitive deficit. It is characterized by low levels of acetylcholine in the brain of AD patients. The inhibition of acetylcholinesterase (AChE) has been one of the most used strategies for the management of mild to moderate AD. In the present study, n-hexane, ethyl acetate, and hydroalcoholic leaf extracts of two medicinal plants Phyllanthus emblica (Euphorbiaceae) and Tamarindus indica (Fabaceae) were screened for anticholinesterase activity and compared with standard acetyl-cholinesterase inhibitor (galantamine) by Ellman’s spectrophotometric method. The results obtained from the three extracts of P. emblica and T. indica against AChE enzyme was evaluated for percentage inhibition and IC50 values. Among the extracts of P. emblica, ethyl acetate extract (96.62 ± 0.165) at a concentration of 200 µg/ml was found to be potent. Ethyl acetate extract of T. indica showed very potent inhibition (97.55 ± 0.087) at the concentration of 200 µg/ml and found to be equally potent with that of galantamine (98.63 ± 0.046) at the concentration of 200 µg/ml. Out of three extracts of P. emblica and T. indica, inhibitory concentration (IC50) data reveals that strongest AChE inhibition activity was exhibited by hydroalcoholic extract of P. emblica with (IC50 = 0.033 μg/ml) followed by ethyl acetate extract of T. indica with (IC50 = 0.046 μg/ml) when compared to galantamine (IC50 = 0.837 μg/ml). The most active extracts showed the presence of flavonoids, alkaloids, and tannins, which may be related to strong AChE inhibition.

INTRODUCTION: In 1906, Alois Alzheimer, a German psychiatrist, for the first time described a new neurodegenerative disease containing distinctive plaques and neurofibrillary tangles in the brain histology of a 50-year-old woman, Auguste D, which was further named as Alzheimer’s Disease (AD), a major type of dementia 1.

The inhibition of acetylcholinesterase (AChE) has been one of the most used strategies for the management of mild to moderate AD. Out of five, FDA approved drugs, tacrine, rivastigmine, donepezil, and galantamine are acetylcholinesterase inhibitor (AChEI), while memantine is an N-methyl-D-aspartate (NMDA) receptor antagonist 3. As AD is a multifactorial disease, 4 the current propensity in drug design and discovery is the rational design of new drug entities challenging multiple targets in AD. Multiple targeted drugs often have their origin in natural sources. Since two of the currently approved drugs for AD are based on natural products - galantamine and the physostigmine-derivative rivastigmine, many plants are now under investigation as a potential source of new drugs.

In an endeavor to disclose new sources that can potentially be used in the treatment of AD, various extracts of Phyllanthus emblica and Tamarindus indica were evaluated for their anticholinesterase activity.

Extraction Process: The freshly collected leaves of the plants were washed with water, shade dried, and powdered. The powdered material of leaves was taken and allowed to contact with, n-hexane, ethyl acetate, and a mixture of water: ethanol (30:70) (hydro-alcoholic extract) solvents and then subjected to cold maceration process.

Phytochemical Screening: The phytochemical screening of various extracts was tested for all the major groups by standard methods 5-9.

In-vitro Acetylcholinesterase Inhibition Assay and Determination of IC50: AChE inhibition activity was measured by using spectrophotometer based on Ellman’s method 10. The principle of the assay was that the enzyme AchE hydrolyses the substrate Acetylthiocholine iodide resulting in the product thiocholine which  in turn reacts with Ellman's reagent DTNB(5,5’-dithio-bis[2- nitrobenzoic acid]) and produces 2-nitrobenzoate-5-mercaptothiocholine and 5-thio-2-nitrobenzoate a yellow colored substance detected at 412 nm. In test tube 1710 µL of 50 mM Tris–HCl buffer pH 8.0 and 250 µL of plant extracts at the concentrations of 25 - 200 µg/mL, 10 µL 6.67 U/ml AChE and 20 µL of 10 mM of DTNB in buffer were added. Positive control namely galanthamine were prepared in serial concentration as same as test extract by dissolving in 50 mM Tris-HCl buffer pH 8.0. The mixture was incubated for 15 min at 37 °C. Then, 10 µL of acetylthiocholine iodide (200 mM) in buffer were added to the mixture and the absorbance was measured at 412 nm. The enzyme inhibition (%) was calculated as follows:

The experiment was done in triplicate and concentrations of the test extract that inhibit the hydrolysis of the substrate (acetylcholine) by 50% (IC50) were determined by probit analysis between the percentage inhibition versus concentration of the extract by using the excel program.

Extractive Values: The extractive values of all the extracts were calculated and given in Table 1.

The phytochemical analysis of n-hexane, ethylacetate, and hydroalcoholic extracts of Tamarindus indica revealed that the tested extracts showed the presence of flavonoids, alkaloids, and tannins.

In-vitro Acetylcholinesterase Inhibition Assay: The results obtained from the three extracts of Phyllanthus emblica and Tamarindus indica against AChE enzyme was evaluated and tabulated for percentage inhibition and IC50 values. 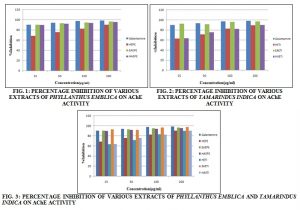 Out of three extracts of Phyllanthus emblica and Tamarindus indica, inhibitory concentration (IC50) data reveals that strongest AChE inhibition activity was exhibited by HAEPE with (IC50 = 0.033 μg/ml) followed by this EAETI with (IC50 = 0.046 μg/ml) when compared to galantamine (IC50 = 0.837 μg/ml).

CONCLUSION: In the cholinergic nervous system, acetylcholinesterase (AChE) is a crucial enzyme. For treating AD, therapies are designed to inverse the cholinergic insufficiency, which is mostly based on AChE inhibitors to improve cholinergic transmission with moderate and transient beneficial effects. A number of studies revealed that cholinesterase inhibitors might act on multiple therapeutic targets such as prevention of the formation of β-amyloid plaques, antioxidant activity, and modulation of APP processing.11 However, there is a prerequisite for novel AChE inhibitor lead compounds with reduced toxicity and extreme central nervous system (CNS) penetration.

The results suggest that ethyl acetate extract of Phyllanthus emblica and hydroalcoholic extract of Tamarindus indica showed strong AChE inhibitory properties similar to that of galantamine (standard) might be categorized as high potency agonists because they were able to elicit inhibition in smaller quantities than the reference substance.

The preliminary phytochemical examination of selected plants suggested that they have alkaloids, flavonoids, tannins. Therefore, it is assuming that these phytoconstituents are responsible for anticholinesterase activity. It is therefore worth study further to isolate the pure molecules responsible for anticholinesterase activity.

Author Contributions: All authors listed have made a substantial, direct, and intellectual contribution to the work and approved it for publication.

ACKNOWLEDGEMENT: I would like to thank my family and the management of the Hindu College of Pharmacy for their support and guidance.

CONFLICTS OF INTEREST: The authors declare that the research was conducted in the absence of any commercial or financial relationships that could be construed as a potential conflict of interest.