ABSTRACT:Screening is important in investigating antimicrobial activities of bacteria in a quest to discover new antimicrobials. Various protocols are readily available and employed by researchers worldwide studying microbiostatic and microbicidal activities of bacterial. This research therefore aims at evaluating available protocols and suggesting a standardized model. For the purpose of these research, antimicrobial ability of Aeromonas spp isolated from estuary was investigated using agar well diffusion method, deferred method and agar disc diffusion method respectively. Result obtained reveals that five isolates were positive to antimicrobial production among fifteen bacteria screened. Result was depended on the protocol utilized. Agar well diffusion produced a visible result when compared to others. Next to this was agar disc method. Deferred method involving both cross streaking and spot on lawn could not produce result as of swarming nature of the positive isolates tested. Based on our results, protocols utilized were grouped into preliminary screening test (PST) and confirmatory tests (CT) respectively. Preliminary screening protocol (PST) consists of deferred method – perpendicular cross streaking and spot-on-lawn while confirmatory protocols (CT) are agar well diffusion and agar disc diffusion methods. Preliminary protocols are not enough to conclude existence or non-existence of antimicrobial activity in bacteria. Conclusively, both preliminary and confirmatory protocols should be employed while screening bacteria for antimicrobials as suggested in our   model.

INTRODUCTION: Increase in global antibiotic resistance of pathogenic bacteria, fungi and protozoa have geared up interest of researchers to investigate different sources for apparent antibiotics discovery. Emerging and re-emerging infections and diseases are continuously posing threat to human existence 1.  For the past decades, marine environment, soil and plants samples have been screened for potential antimicrobial compounds. Bacteria that have been identified as bioactive compounds producersinclude Pseudomonas, Micrococcus sp2, Vibrio ruber 3, 4 Lactobacillus acidophilus 3, 5, Bifidobacteria 6, Bacillus 7, Lactococcus 8, 9, 10, Staphylococcus, Actinomycetes 11 and Aeromonas hydrophila 12. Antimicrobials are products of microbial metabolism capable of inhibiting the growth of microorganisms.  Antimicrobials have been reported in both Gram positive and negative bacteria 13. Microbial inhibitory metabolites are either categorized as primary or secondary by-products 1. According to Nanjwadeet al., 201011, over 10,000 antibiotics have been discovered in the past five decades   with   more than 65% coming from actinomycetes.  Bioactive metabolites from lactic acid bacteria are used in food preservation to elongate the shelf life of food products 3. Identified metabolites capable of inhibiting the growth of other bacteria include organic acids, oxidizing agents   like peroxide, siderophores and antimicrobial protein. Factors such as growth medium, incubation period, degree of alkalinity and acidity, temperature and protocols used for screening bacteria are capable of affecting results obtained. Only a careful selection of a mix of these factors can guarantee optimum results.

Research in life and natural sciences involve use of scientific protocols designed by various researchers for experiment purposes. Protocols can be modified to suit the purpose and aims of the researcher studies. Screenings for antimicrobial activity of bacteria have attracted different protocols. However, till date, no clear cut model has been developed. As a result of different existing protocols, a new model categorizing the existence method is hereby proposed. This research aim to investigate and compare antimicrobial activity screening of Aeromonas spp. isolated from estuary using different protocols

Agar Well Diffusion Method: Presumptive Aeromonas isolates were screened for in vitro antimicrobial activity against selected Gram positive and negative bacteria using agar well diffusion method. This was carried out using agar well diffusion method 10. Isolates were grown in 250ml Nutrient Broth + 3% NaCl, Lactose Broth + 3% NaCl, Marine Broth and Tryptone Soy Broth respectively. These were then incubated in a shaker incubator at 200rpm, 300oC for 18- 24hours. 50ml of the cultured broth were centrifuged at 4000 x g, 4oC for 20 minutes to obtain a cell free supernatant. 1.2ml of supernatant obtained was transferred into sterile eppendorf tube and centrifuged at 16000rpm for 10minutes.

Effect of Siderophores on Antimicrobial Activity: 60µl of 1% Ferric chloride (FeCl3) was added to 20ml of TSB. 20µl of producer strains were added and incubated at 30oC, 200rpm for 18-24 hours. These were then centrifuged at 4oC for 20 minutes at 4000xg. Resultant cell free supernatants were tested for antimicrobial activity as described above.

Partial Purification: 40% and 60% ammonium sulphate were added to 5ml cell free supernatants and left overnight at 4oC for protein precipitation. 40l of each extracts was then tested against indicator bacteria using above antimicrobial activity method.

Agar Disc Diffusion Method: is quite similar to agar well except wells being replaced with sterile discs prepared from Whatman’s filter paper 7.

TABLE 3: CRITICAL ANALYSIS OF MERIT AND SHORTCOMINGS OF EACH PROTOCOL 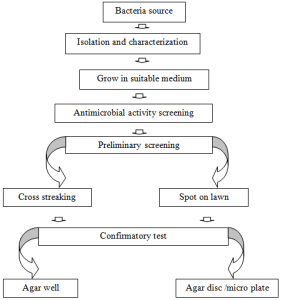 RESULTS AND DISCUSSION: A total of 15 isolates were isolated from estuary samples. Cell and Colony morphologies for each isolates were noted. The isolates were catalase and oxidase positive, Gram negative, resistant to 0129/Vibriostatic agent and were able to grow on NA +3.5 %NaCl.

Results obtained from this agar well diffusion screening revealed that isolates Sg-20, Sg-19, Sg-17, Sw-16 and Sg-13 showed antimicrobial activity against the following indicator bacteria: MRSA, S. soneri, S. typhimurium, V. parahaemolyticus, A. hydrophila, E. faecalis, B subtilis on different medium. Sg-20 in LB broth showed the highest zone of inhibition against MRSA, S. soneri,  S. typhimurium, V. parahaemolyticus and A. hydrophila,. However, no inhibition was observed when Sg-20 was grown in TSB, MB and NB respectively against the pathogens except E faecalis. It also show inhibition against B subtilis when grown in Nutrient broth supplemented with 3 % NaCl.

Sw-20 in LB did not show any inhibition against the four bacteria when incubated at 25-27oC for 24 hours. Isolate Sg-20 showed a broad spectrum activity. The extracted antimicrobial was found to be inactivated when heated. Cell-free filtrate was heated at the following temperature 27 o C, 60 o C, 100 o C and 120 o C respectively for 15 minutes each. The filtrate was stable at 60oC and inhibited tested indicator strains. No inhibition was observed at 100 o C and 120 o C respectively. It was also observed that the isolate did not exhibit antimicrobial property when grown for 48-72hours.

Siderophores are low molecular weight chelating agents required by bacteria in scavenging iron in growing environment. Iron is needed for DNA synthesis. Results obtained showed that no inhibition was observed against tested strains indicating antimicrobial activity of producer bacteria was not as a result of siderophores production by bacteria as also observed by 1.

All isolates showing inhibitory abilities did not give any positive result using cross streak method of screening. This was due to the fact that they spread over the plates after 18-24 hours of incubation. As a result of this, it was difficult to streak the plates perpendicularly with indicator bacteria. Similar thing was also observed with spot on lawn method. As seen in table 3, each of the protocol has its own merit and demerit. Swarming bacteria cannot be screened for antimicrobial activity using both spot on lawn and cross streak methods respectively.

Proven, accepted and reproducible laboratory procedures are of immense importance in life and natural sciences research. Search for new and effective antimicrobials that can be used in the fight against antibiotic resistance of bacteria have attracted different protocols.

Factors responsible for this includes sources of bacteria, cultural characteristics of bacteria and availability of appropriate materials growth medium. Marine bacteria require different environmental and laboratory growth conditions in order to produce needed metabolites likewise soil bacteria and environmental bacteria. Protocols needed for their studies may therefore differ. However, uniformity can still be achieved in this area by using more simplified and combination of existing protocols It is therefore of great importance if these protocols are grouped into preliminary screening and confirmatory test.

Preliminary screening is required to test possibility of inhibition of the growth of indicator bacteria by the suspected antimicrobial producers. Confirmatory test however confirms this initial claim of antimicrobial activity. Initial screening will help save time, energy and research materials. It also gives a green light to proceed with the investigation. However, due to media and cultural conditions, some antibiotic producers may not exhibit this during preliminary screening. It is therefore important to ensure appropriate medium at optimum growth conditions are provided.

As seen in figure 1, the suggested model consists of two stages involving preliminary screening and confirmatory test respectively. Stage 1: In this stage, cross streaking method or spot on lawn is used to screen the isolates for potential antimicrobial abilities. Stage 2: A more detailed test is needed to establish the result obtained in preliminary screening hence confirmatory test is to be carried out as described in proposed model. Any of agar well diffusion, agar disc diffusion and micro plate could be used.

This is required because some bacteria that are initially positive can lose their inhibitory abilities.All screening tests should be classified as either preliminary/primary screening lest or confirmatory test (CT). Screening protocols that does not involve extraction of the antimicrobial activity constituent should be used as preliminary/ primary screening test. Protocols such as deferred method, spot-on-lawn are suitable for the first test.

On the other hand, confirmatory screening test involves extraction of the active constituent from cell-free supernatant and then testing it on the same indicator organism.  Agar well diffusion and Agar disc diffusion methods are best suitable in this category.