ABSTRACT: This study was carried out with an objective to investigate the antibacterial and antifungal potentials of leaves of Ficus arnottiana Miq. The aim of the study is to assess the antimicrobial activity and to determine the zone of inhibition of extracts on some bacterial and fungal strains. In the present study, the microbial activity of ethyl acetate, methanol and aqueous extracts of leaves of Ficus arnottiana Miq. was evaluated for potential antimicrobial activity against medically important bacterial and fungal strains. The antimicrobial activity was determined in the extracts using agar cup method. The antibacterial and antifungal activities of extracts (50, 100, 200 μl) of Ficus arnottiana were tested against two Gram-positive—Staphylococcus aureus, Bacillus subtilis; two Gram-negative Escherichia coli, Pseudomonas aeruginosa human pathogenic bacteria; and two fungal strains Fusarium solanii, Candida albicans. Zone of inhibition of extracts were compared with that of different standards like Doxycycline for antibacterial activity and fluconazole for antifungal activity. The results showed that the remarkable inhibition of the bacterial growth was shown against the tested organisms. The phytochemical analysis of the plants was carried out. The microbial activity of the Ficus arnottiana was due to the presence of various secondary metabolites. Hence, these plants can be used to discover bioactive natural products that may serve as leads in the development of new pharmaceuticals research activities

INTRODUCTION: Antibiotics are one of the most important weapons in fighting bacterial infections and have greatly benefited the health-related quality of human life since their introduction. However, over the past few decades, these health benefits are under threat as many commonly used antibiotics have become less effective against certain illnesses not, only because many of them produce toxic reactions, but also due to emergence of drug-resistant bacteria.

It is essential to investigate newer drugs with lesser resistance. Drugs derived from natural sources play a significant role in the prevention and treatment of human diseases and infections. In many developing countries, traditional medicine is one of the primary healthcare systems. 1, 2 Herbs are widely exploited in the traditional medicine and their curative potentials are well documented. 3 About 61% of the new drugs developed between 1981 and 2002 were based on natural products and they have been very successful, especially in the areas of infectious disease. 4

Recent trends show that the discovery rate of active novel chemical entities is declining. 5 Natural products of higher plants may give a new source of antimicrobial agents. 6, 7 The effects of plant extracts on bacteria have been studied by a very large number of researchers in different parts of world. 8 Much work has been done on ethno medicinal plants in India. 9 Plants are rich in a wide variety of secondary metabolites such as tannins, terpenoids, alkaloids, flavonoids, glycosides, etc., which have been found in vitro to have antimicrobial properties.10, 11 In an effort to expand the spectrum of antibacterial agents from natural resources, Ficus arnottiana belonging to Moraceae family has been selected. All parts of Ficus arnottiana Miq. are used as medicine in indigenous system of medicine; the stem bark is the most potent for medicinal use. The leaves of the plant are used to treat skin diseases. Leaves also have aphrodisiac activity. The roots of the plant are also used as astringent. The bark of the tree was used as astringent, aphrodisiac, demulcent, depurative and emollient. It is also used in inflammation, diarrhoea, purities and diabetes, burning sensation, leprosy, scabies, wound healing and some other skin and vagina diseases. The juice of bark is used as aphrodisiac in Ayurvedic medicinal system and good for lumbago. 12, 13, 14

In the current investigation carried out, a screening of ethyl acetate, methanol and aqueous extracts of Ficus arnottiana leaves against pathogenic bacteria and fungi is done in order to detect new sources of antimicrobial agents.

Plant Material: The leaves of Ficus arnottiana Miq., belonging to Family Moraceae was collected as Wild plant from the forest of Balawala, Dehra Dun (Uttrakhand, India) in the month of August 2011 was shade dried, powdered and stored. It was authenticated and identified as Ficus arnottiana Miq. by Dr. A.S. Sandhu, Garden Supervisor at National Institute of Pharmaceutical and Educational Research (NIPER), Mohali. The sample was submitted to college herbarium with reference number GFA/11/09.

Determination of zone of inhibition method:

In vitro antibacterial and antifungal activities were examined for ethyl acetate, methanol and aqueous extracts. Antibacterial and antifungal activities of plant part extracts against four pathogenic bacteria (two Gram-positive and negative) and two pathogenic fungi were investigated by the agar cup method.19-21 Each purified extracts were dissolved in dimethyl sulfoxide, sterilized by filtration using sintered glass filter, and stored at 4°C. For the determination of zone of inhibition, pure Gram-positive, Gram-negative, and fungal strains were taken as a standard antibiotic for comparison of the results. All the extracts were screened for their antibacterial and antifungal activities against the Escherichia coli, Pseudomonas aeruginosa, Staphylococcus aureus, Bacillus subtilis and the fungi Candida albicans, and Fusarium solanii. The sets of three dilutions (50, 100, and 200 μl) of Ficus arnottiana extract and standard drugs were prepared in double-distilled water using nutrient agar tubes. For evaluation of anti fungal activity, instead of nutrient agar, Sabouraud dextrose agar was used. The inoculated medium was incubated at 25°C for two days for the fungal strains. Fluconazole (5mg) was used as standard drug.

Antibacterial and antifungal potential of ethyl acetate, methanol and aqueous extracts were assessed in terms of zone of inhibition of bacterial growth. The results of the antibacterial and antifungal activities are presented in Tables 1, 2, 3, 4 and 5. Antimicrobial activities of various extracts were determined by Agar Cup Method. Zone of inhibition were measured in mm (including bore diameter 4 mm). FAEAE showed maximum antimicrobial activity against S. aureus in 200 µl concentration (Table 1, Fig. 1). FAME showed less antimicrobial activity in comparison to FAEAE (Table 2, Fig. 2). FAAE showed good antimicrobial result in almost all microbial strains at a concentration of 200 µl (Table 3, Fig.3). 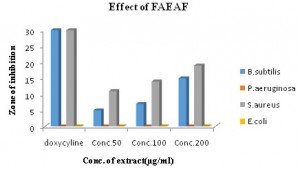 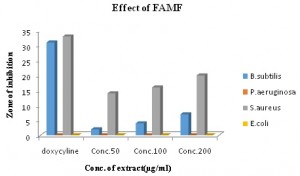 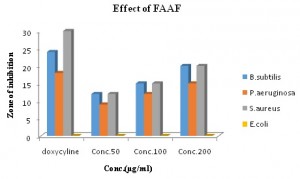 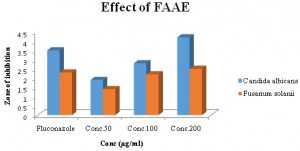 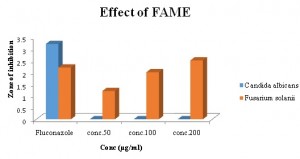 Therefore, the antifungal activity of both the extracts showed the following order (Fig. 7)

(I, II, III = concentration of extract and s = standard drug)

ACKNOWLEDGEMENT: Authors are thankful to all the members A.S.B.A.S.J.S.M College of Pharmacy, Bela for their full co-operation during the whole research work. I would like to thank Dr. Satnam Singh, for his illuminating guidance right from the conception to the completion of my work.  My efforts will remain incomplete if I fail to acknowledge my parents and husband for their eternal support. Also, I would like to acknowledge my daughter Rubaani.