IN- VITRO ANTIMICROBIAL ACTIVITY OF EXTRACTS OF SEEDS OF CLEOME VISCOSA LINN.

IN- VITRO ANTIMICROBIAL ACTIVITY OF EXTRACTS OF SEEDS OF CLEOME VISCOSA LINN.

Since ancient times, plants have got medicinal importance. Ethno medicinal use of plants is very common in rural parts of India. Various constituents of these plants have shown profound therapeutic and prophylactic activities. The present research work is conducted to investigate invitro antimicrobial activity of various extracts of seeds of plant Cleome viscosa Linn. The petroleum ether, chloroform, ethyl acetate, ethanol & water extract of seeds of plants were screened against eight microbial species. Clinical samples of pus from earache patients were also used. The test materials have shown significant antimicrobial activity. The zones of inhibition are found to be between 10 mm to 17 mm. The minimum inhibitory concentration (MIC) values of extracts are also determined against microorganism which ranges from 0.1 to 0.45.

INTRODUCTION: Since ancient times, plants have been source of crude material for medicines. A rich heritage of knowledge of medicinal importance of plants is available in India amongst the common people 1. Generally, it is estimated that more than 3500 plant species in India are useful as a source of crude drug. Near about 2500 plants are ethno medicinally important 2.  There are too many plant species which are considered as a weed, but they are also medicinally important. The products obtained from plants are used in various traditional and modern methods of therapy 3.

The trend of using natural products as a medicine is ever increasing. The invention of modern biotechnological and bioinformatics techniques have helped new drug discoveries. So the scope of study of medicinal plants & their importance is expanding 4, 5. The present article deals with screening of antimicrobial activity of seeds of plant Cleome viscosa Linn. which has got considerable ethno pharmacological reputation 6 ,7. The plant is useful in the treatment of earache in ethno medicinal practices8. Various parts of plants are used in digestive disorders. It is also used as stomachic, carminative and laxative. It is also used as diuretic and antihelmintic. Saxena & Koli reported preliminary ethnomedicinal & phytochemical properties of Cleome viscosa L 9. It also shows cooling effect. From literature survey, it was observed that the extracts of plant have significant anti diarrheal, analgesic & antipyretic activity.

Devi B. P., Boominathen R. & Mandal S. C., reported these activities 10, 11. Various extracts of plant are used in mental disorders & convulsions 12. The plant parts are used in the liver diseases, arthritis & fractures 13. The leaf extract of plant has also shown antimicrobial activity. Sudhakar M., Rao C. V., Rao P. M, Raju D. B. reported antimicrobial activities. However the extracts of seeds of this plant are not studied so far. The current work was undertaken in order to study scientific authenticity of its use as a potential antimicrobial agent & to check its use in earache as per ethno medicinal claims.

Plant Material: The plants were collected from various places of Amaravati district of Maharashtra, India during November & December. The plants were identified & taxonomically authenticated by Dr. Prabha Bhogaonkar, Head of Department of Botany, Vidarbha Institute of Sciences, Amaravati. The voucher specimen is kept at Department of Pharmacognosy, Government College of Pharmacy, Amaravati for further references.

Extraction & Isolation: The dried seeds were collected from the plants. Then seeds were powdered & reduced to desired size. The coarse powder was obtained by passing through sieve no. 22 16 & obtained fine powder. Then the powder was stored in closed vessel for further use .The stored powder was then extracted in Soxhlet’s apparatus with successive extraction 17. Each of the extract was concentrated at reduced pressure by using rotary evaporator. The solid extracts obtained were kept in desiccators. This material was ready for antimicrobial screening. In a forwarding step, all extracts were dissolved in 10 ml of dimethyl sulfoxide (DMSO) 18.

Along with that, clinical samples i.e. ear micro flora of three volunteers (A, B, C) & two pus samples from earache patients(D, E) were collected. These collected samples were containing mixed cultures of microorganisms. The ear micro flora of volunteers was obtained by using sterile cotton swab. Then the swabs were inoculated in sterile nutrient medium. The pus samples were collected from pathology laboratory of Rural Hospital, Purna, The cultures of above mentioned all microorganisms were enriched. The ear microflora samples were screened for their identification. They were identified as Staphylococcus aureus, Pseudomonas aureginosa, Aspergillus niger & Candida albicans. Then the cultures were serially diluted. 10-7 concentration was used for the study.

The nutrient agar was used as a medium for bacterial cultures & Sabouraud dextrose agar was used for fungal cultures. Then by using spread plate technique, microbial cultures in plate were developed. The wels of size 10 mm were prepared in the plate by using aluminum borer 22. The extracts were dissolved separately in DMSO. Then 0.1 ml of each extract was added in a wel by using micropipette. One plate was prepared by adding only 0.1 ml of DMSO as a negative control. Gentamycin 10 mcg/ml & Griseofulvin 30 mcg/ml were used as a standard antibacterial & antifungal agent respectively, in two different plates.

These drugs were used as a positive control. All work was strictly carried out in aseptic condition. Then the plates were refrigerated for 30 minutes to allow diffusion of compounds in agar medium .Then the plates were incubated at 370C for 18 hours. Same procedure was repeated for every micro organism including clinical samples.

After incubation, the diameters of zones of inhibition were measured. The minimum inhibitory concentrations (MIC) of extracts were also determined against all microorganisms. The tests were carried by using serial dilution technique 23, 24, 25, 26, 27, 28. The measurements of zone of inhibition and minimum inhibitory concentrations i. e., MIC are provided in Table 1 & 2 respectively along with diagrammatic representations 1 & 2. 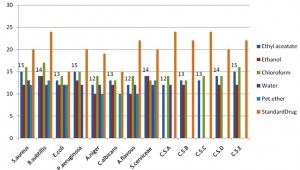 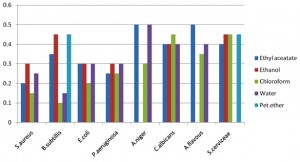 RESULTS AND DISCUSSION: The antimicrobial activity of various extracts of seeds of Cleome viscosa Linn was found very significant. The zones of inhibition obtained by extracts of ethyl acetate, petroleum ether, and chloroform were found against bacteria from 12 to 17 mm and against fungi are from 12 to 14 mm. The zones of inhibition against micro organisms of clinical samples were from 12 to 14 mm. The MIC against various bacterial strains was from 0.10 to 0.45 & various fungal strains was from 0.3 to 0.5. All extracts except extract of petroleum ether has shown significant activity against all microorganisms. The chloroform & ethyl acetate extract has shown greater activity against identified microbial strains as well as clinical samples. The ethanolic extract also has shown greater antimicrobial activity. The water extracts has also shown sound activity. The petroleum ether extract has not shown noticeable activity against bacterial & fungal strains. It has also not shown activity against clinical samples. From above observation it is found that the compounds in chloroform, ethyl acetate & ethanolic extracts are potent antimicrobial agent. There activities are significant. The compounds in petroleum ether extracts have not shown antimicrobial activities.

CONCLUSION: In conclusion, the study is reported the antimicrobial activity of seed extracts of Cleome viscosa Linn. The compounds in some extracts of seeds of this plant are showing activity against bacteria, fungi as well as mixed cultures obtained from ear micro flora of common people & pus samples of ear. It indicates importance of this plant as a source of antimicrobial compounds particularly against ear infections. The study also supports ethno medicinal claim of use of this plant in ear infections.  These compounds may give some potent candidates & may replace the synthetic antimicrobial agents which are used currently in clinical practices. The study also indicates significance of ethno pharmacological information as a source of reference for data base preparation & to make it available for modern studies like isolation of bioactive compounds, their pharmacological activities, identification of their structures etc. The present study also focuses on use of weeds for medicinal purpose & development of trend to study the usefulness of weeds. However further studies are needed to evaluate & isolate these compounds from Cleome viscosa Linn.  & studies related with their structures, other activities, efficacy, potency, safety etc.