Colocasia esculenta belonging to family araceae popularly knows as “taro”, is very useful medicinal plant described by Charaka as an anti-inflammatory plant. An experiment was carried out to study the antimicrobial activity of chloroform and methanol extract of Colocasia esculenta plant by agar diffusion method. Zone of inhibition produced by chloroform and methanol extract in dose of 20, 10, 5, 2.5, 1.25, 0.625, 0.3125 mg/ml against some selected strains was measured and compared with standard antibiotics tetracycline in dose of 5, 2.5, 0.625, 0.3125, 0.15625, 0.078072 mg/ml.

INTRODUCTION: Colocasia esculenta (araceae) having Taro as local Indian name, was evaluated for preliminary antimicrobial activity. They are edible aroids which are important staple foods in many parts of the world. Within the family Araceae True taro probably originates from the tropical region between India and Indonesia and has been grown in the South Pacific for hundreds of years. The species is thought to be a native of India. The young leaves are rich in Vitamin C, and the roots are rich in starch. It contains thiamine, riboflavin, niacin, oxalic acid, calcium oxalate, sapotoxin and flavones, apigenin and luteolin.

The tubers contain amino acids and proteins. The corms contain the anthocyanins perlargonidin 3-glucoside, cyaniding 3-rhamnoside and cyaniding 3-glucoside. Traditionally it is used to settle the stomach, to prevent swelling and pain and to reduce fever. It is also used as a poultice on infected sores. The leaf juice of the plant is styptic, stimulant and rubefacient, and is useful in internal hemorrhages. The juice of the corm is laxative, demulcent and anodyne. Antiinflammatory activity has been reported 1.  Antibacterial Activity of Colocasia esculenta was studied against bacterial strains, Pseudomonas testosteroni, Staphylococcus epidermidis, Proteus morganii, Bacillus subtilis, Micrococcus flavus and Klebsiella pneumoniae. The methanolic extract showed inhibitory activity against K. pneumoniae only 2.

MATERIAL AND METHOD: Fresh leaves of Colocasia esculenta collected in the month of November to December from Amravati District, Maharashtra. The fresh leaves of Colocasia esculenta were dried under shade & powder in a mixture grinder. The powder leaves packed in a paper bags and stored in air tight container until use. The  Soxhlet  process  was  used  for  the    extraction  of  the  plant  material  with  particular  solvent   choose  according  to  increasing  its  polarity like Chloroform, Methanol . Qualitative phytochemical analysis of all extracts was performed to know chemical constituents of extracts.

Antimicrobial Study: Microorganisms: All the strains of micro- organism were obtained from National chemical Laboratory, Pune. Table 1 is showing Gram-Positive, Gram-negative and fungal microorganisms used for the study.

Antibacterial Assay: Agar-well diffusion method: The agar diffusion method was used to screen the Antibacterial activity of various extract of leaves of. Colocasia esculenta 0.2 ml of each of the seeded broth containing 10-7 test organisms was inoculated on the plates of solidified agar and spreaded uniformly. Then 8 wells were cut in the agar layer of each plate with an aluminium bore of 6mm diameter.

In every plate 6 different extracts of concentration 20 mg/ml dissolved in DMSO were added while in 7th and 8th well standard tetracycline and control DMSO was added. Then all plates were incubated at 370C ± 1 for 18 hrs. After the incubation period the mean diameter of the zone of inhibition in mm obtained around the well was measured which has been shown in Table 2.

TABLE-2: ZONE OF INHIBITION IN MM (INCLUDING BORE DIAMETER 6MM)

Antifungal assay: Anti-fungal study was carried out through same procedure as used in antibacterial study only difference was media used for antifungal study was Sabouraud dextrose agar media (SDA MEDIUM) 3, 4.

Two fold serial dilution method: The test was carried out individually for different microorganisms with respect to the chloroform, methanol solvent extract which shows effective result on bacteria. This testing was done in the seeded broth by two-fold serial dilution technique. The solutions of different extracts were prepared of concentration 20 mg/ml in DMSO. For both Gram positive and Gram-negative organism a series of 7 assay tubes for concentrations i.e. 20, 10, 5, 2.5, 1.25, 0.625, 0.3125 mg/ml for each extract were used, while standard tetracycline concentration was taken as 5, 2.5, 0.625, 0.3125, 0.15625, 0.078072 mg/ml. One  positive  control  for  each  microorganism  was  prepared  by  adding  nutrient  broth  with  respective  microorganism  inoculums. To each concentration test tube required volume of sterile nutrient broth and inoculums was added and kept for 24 hours incubation at 370C.  After incubation period the growth of microorganism by considering turbidity was measured by using turbidometer 5. Results are shown in Table 3. 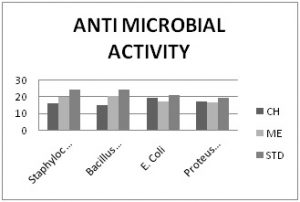 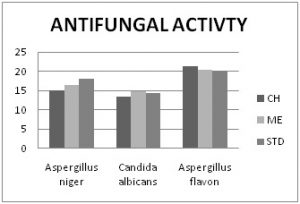