ABSTRACT: Tuberculosis (TB) remains a highly significant infection of microbial origin causing death of human in developing countries. The anti-tubercular drugs are less effective because of the emergence of multi-drug resistant strains and ineffective to extensively drug resistant strains of Mycobacterium tuberculosis. Plants are being an alternative source of anti-microbial compounds; the aim of this study was to investigate anti-mycobacterial potential of the few Indian medicinal plants and isolated compound from these to standard avirulent Mycobacterium tuberculosis H37Ra, standard virulent H37Rv and isoniazid resistant clinical isolates using Broth Microdilution Method. Methods and Results: Lyophilised ethanolic, aqueous and aqueous ethanolic extracts of four Indian medicinal plants viz. Coleus amboinicus, Glychirrhiza glabra, Pongamia pinnata and Terminalia chebula  were screened for their in vitro antimycobacterial activity by Broth microdilution method (BMM) after 14 days of incubation at 37°C. The ethanolic extract of G. glabra was active against the tested strains of M. tuberculosis in primary screening with a MIC of 500µg/ml. The other extracts failed to exhibit inhibition at the tested concentrations. Glycyrrhizin a major and active constituent of the root of G. glabra was hence evaluated for its anitmycobacterial activity to the tested strains of M. tuberculosis. The isolated pure compound Glycyrrhizin exhibited a MIC value of 100µg/ml to the tested strains of M. tuberculosis. Conclusion: Our findings provide scientific support for ethno medical uses of Glycyrrhiza glabra to cure coughs and chest related ailments with the establishment of glycyrrhizin as a molecule for antimycobacterial activity and indicate a promising potential of this plant for the development of safer and efficacious anti-tuberculosis therapy.

INTRODUCTION: Tuberculosis (TB) is an infection of microbial origin causing death of human in developing countries transmitted by inhalation of aerosolized droplets of Mycobacterium tuberculosis. It affects almost all the organs of the body, the lungs being most commonly involved. Due to the emergence of multi-drug resistant (MDR) strains the anti-tubercular drugs have become less effective and ineffective due to emergence of extensively drug resistant (XDR) strains of M. tuberculosis.

This has complicated the treatment and made TB more difficult to manage. Researchers around the world are increasingly turning their attention to traditional medicine in search of new and better antitubercular leads. Natural products play a significant role in the discovery and development of highly active antimycobacterial metabolites. The rhizome of Glycyrrhiza glabra Linn., commonly known as liquorice, is a reputed drug of Ayurveda. The rhizomes of G. glabra species have long been used worldwide as an herbal medicine and natural sweetener. Licorice is used to relieve ‘Vata’ and ‘Kapha’ inflammations, eye diseases, throat infections, peptic ulcers, arthritic conditions, and liver diseases in Indian Ayurveda system 1.

Standard strain H37Rv and INH resistant clinical isolates of M. tuberculosis were obtained from patients with pulmonary tuberculosis from the Tuberculosis Research Centre (NIRT), Chennai. Genotypic drug resistance of INH resistance isolates was detected by DNA sequencing analysis and mutations were reported in kat G gene and inh A gene of isolates 2.

Mycobacterium tuberculosis H37Ra (ATCC 25177) was obtained from ATCC. The cultures were maintained on Lowenstein-Jensen media slant at 37 °C. The details of the strains and isolates used for the study are presented in Table 1.

TABLE 1: CHARACTERISTICS OF STRAINS USED FOR TESTING THE ANTIMYCOBACTERIAL ACTIVITY

The pure compound Glycyrrhizin was obtained through DST (TDT) Project from IIIM, Jammu.

Healthy plant parts were collected air-dried in the shade at room temperature. The accuracy of the plant parts and family were ascertained with the Department of Plant Biology & Biotechnology, Presidency College (Aut), Chennai. Table 2 shows the list of plants used in the study.

Four plants were chosen according to traditional use for treating respiratory diseases in the indigenous system of medicine in India and also for the treatment of tuberculosis based on literature. Crude extracts of the 4 medicinal plants were obtained. The healthy parts were surface sterilized with 70% ethanol. The parts were ground into powder and collected by sieving. Twenty grams (20 g) of the finely ground plant part was soaked with 100 ml Ethanol/sterile distilled water/50ml ethanol 50ml water (1:1) and stored overnight at 4ºC. Filtered and centrifuged to get clarified extract which were pooled together and filtered through a 0.22µm pore sized millipore filter.

The sterile extract was transferred to lyophilisation flask & freezed at -800C in deep freezer. The frozened extract was loaded to Lyophilizer. The lyophilised extract was stored in – 200 C till further studies.

1 mg of each plant extract/compound was dissolved in 100 µl of sterile distilled water and 900µl of 7H9 broth to make 1ml. It was mixed completely using a cyclomixer. Rifampicin and Isoniazid (INH) were used as reference durg controls and were prepared by dissolving in 100 µl water for INH and 100 µl DMSO for Rifampicin and mixed with 900µl Middle brook 7H9 broth medium. The stock solutions were sterilized through 0.20 µm sartorius single use filter.

200μl (100μg /100 μl) of the extracts/compound were serially diluted in Middle brook 7H9 broth. The initial concentration was 500μg / ml and the final concentration was 3.9μg/ml. Each well was inoculated with 5μl of 0.5 McFarland standard bacterial suspensions. As a growth control a well without antimycobacterial agents was also inoculated with of 5 μl of 0.5 McFarland standard bacterial suspension. 0.1 ml amounts of Middle brook 7H9 broth were added to all the wells and the plates were sealed and incubated at 37°C for 14 days in a moisturized incubator. Extracts/ Compounds demonstrating at least 90% inhibition in the primary screen were re-tested at lower concentrations in order to determine the actual minimum inhibitory concentration (MIC). The MIC was defined as the lowest concentration effecting absence of growth relative to drug controls.

The anti-mycobacterial potency of the active plant extracts were determined by Broth Microdilution Method. Growth or inhibition of M. tuberculosis H37Ra, H37Rv, mono resistant and poly resistant isolates by Broth Microdilution method in extract/compound containing and in extract/compound free control wells after 14 days of incubation at 37°C were recorded. The preliminary in vitro screening of extracts revealed the lyophilized ethanolic plant extract of rhizomes of Glychirrhiza glabra to inhibit the tested strains with a MIC value of 500µg/ml. The other extracts failed to exhibit inhibition at the concentrations tested. 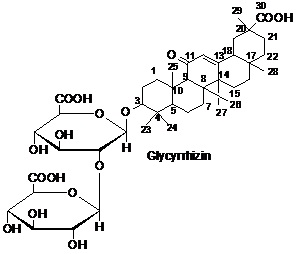 DISCUSSION: The advantages of using antimicrobial compounds from medicinal plants include fewer side effects, better patient acceptance due to long history of use, reduced costs and cultivability rendering them renewable in nature 8. The present study was carried out to find out the in vitro antimycobacterial potential of few selected Indian medicinal plants based on ethno-medicinal uses. Antitubercular activity in G. glabra has been reported by Vivek K Gupta et al., 2008 in ethanolic extract at a MIC of 500μg/ml on H37Ra and H37Rv strains of M. tuberculosis.  However the present observation has focused on the antitubercular activity of G. glabra extracts to isoniazid resistant clinical isolates in addition to standard avirulent H37Ra, virulent strain of H37Rv which are first time observations to the best of our knowledge. Hence we continued for activity of isolated active molecule.

In the present study the isolated compound Glycyrrhizin was evaluated for its antimycobacterial activity to the tested standard and resistant strains by BMM and found to exhibit significant activity at 100µg/ml.

CONCLUSION: Our findings provide scientific support for ethno medical uses of Glycyrrhiza glabra, which is used in the treatment of chest related ailments with the establishment of glycyrrhizin as a molecule with appreciable antimycobacterial activity. Although the results from the present study are indicative that Glycyrrhizin has promising antimycobacterial activity, as this molecule is known to be a single drug with a potentiality to inhibit avirulent H37Ra, Virulent sensitive H37Rv, INH monoresistant, INH polyresistant strains further in vitro screening of this molecule for its efficacy to MDRTB  is needed. Further studies on the mechanism of its action and structure and activity relationship (SAR) may also be estimated for it to be a better drug candidate in future.