ABSTRACT: The aim of the study to determine antioxidant and cytotoxic properties of the bark extracts of Syzygium cymosum along with phytochemical study for the presence of phytochemical constituents. Total phenolic and flavonoid content of the S.Cymosum   extracts was determined by using the Folin- Ciocalteu reagent and aluminum chloride (AlCl3) method, respectively. The crude methanolic extract of S.Cymosum was studied to evaluate its antioxidant activity by DPPH radical scavenging assay and reducing power assay. Brine Shrimp Lethality Bioassay was done for cytotoxic activity. Bark extracts of S.Cymosum have been shown to possess phytoconstituents including carbohydrates, alkaloid, glycosides, steroids, tannins and saponin. The extract was found to contain significant amount of phenol and flavonoid in Folin-Ciocalteau and total flavonoid content assay. Total antioxidant capacity of the extract was estimated to be 505.5±3.535 mg/g of ascorbic acid equivalent. Its IC50 value in DPPH method was 64.99079µg/ml. The extract showed concomitant increase in reducing power with the increase of concentration of the extract. In case of brine shrimp cytotoxicity assay, LC50 value was obtained to be 307 μg/ml. Data from present results revealed that it act as an antioxidant agent due to its free radical scavenging and it has also cytotoxic activity

INTRODUCTION: Free radicals are generated during body metabolism, which have been claimed to play an important role in affecting human health by causing several diseases such as cancer, autoimmune disorders, aging, cataract, rheumatoid arthritis, cardiovascular and neurodegenerative diseases. Exogenous intake of antioxidants can help the body scavenge free radicals effectively 1, 2. Many polyphenolic compounds, such as phenolic acids, flavonoids, anthocyanidins, and tannins, which possess remarkable antioxidant activities, are rich in plant materials.

Some studies have shown the positive correlation of the increased dietary intake of natural antioxidants with the reduced coronary heart disease and cancer mortality, as well as with longer life expectancy 3, 4. In the search for novel antioxidants, many plant species have been investigated but there is still a demand to find more information concerning the antioxidant potential of plant species 5. Utilization of these significant sources of natural antioxidant to prevent or improve free radical mediated injury becomes very important. Syzygium cymosum of family Myrtaceae was investigated to determine the antioxidant activities in this study 6.

Syzygium cymosum is an evergreen tree is widely distributed in tropical and subtropical area. It is found in India, Singapore, Myanmar and Malacca. Fruit is edible and the wood is used for posts, fuel etc 6. In order to prove the traditional utilization of Syzygium cymosum, this paper was intended to investigate the antioxidant effect of methanolic extract of the barks of Syzygium cymosum

Syzygium cymosum was collected from Sylhet area and identified by taxonomist at the Department of Botany, Jahangirnagar University, Savar, Dhaka.

The barks of the plant were collected in fresh condition. It was sun-dried first and then, dried in an oven at reduced temperature (< 70 0C) to make suitable for grinding. The powdered plant materials were submerged in sufficient volume of methanol in an air-tight flat bottomed container for seven days, with occasional shaking and stirring. The extracts were then filtered and dried on electrical water bath.

Total phenols were determined by Folin Ciocalteu reagent 7. A dilute extract of plant extract (0.5 mL of 1:10 g/mL diluted with distilled water) or Gallic acid (Standard phenolic compound) was mixed with Folin Ciocalteu reagent (5 mL, 1:10 diluted with distilled water) and aqueous Na2CO3 (4 mL, 1 M). The mixtures were allowed to stand for 15 minutes and the total phenols were determined by colorimetry at 765 nm. The standard curve was prepared using 0, 50, 100, 150, 200, 250 mg/l solutions of Gallic acid in methanol: water (50:50, v/v). Total phenol values are expressed in terms of Gallic acid equivalent (mg/g of dry mass), which is a common reference compound. The result was calculated from the regression equation of the calibration curve (y=0.013x+0.127, r2 =0.988).

Aluminum chloride colorimetric method was used for flavonoids determination 8. Each plant extracts (0.5 mL of 1:10 g/mL) in methanol were separately mixed with 1.5 mL of methanol, 0.1 mL of 10% Aluminum chloride, 0.1 mL of 1 M potassium acetate and 2.8 mL of distilled water. It remained at room temperature for 30 minutes. The absorbance of the reaction mixture was measured at 415 nm. The calibration curve was prepared by preparing quercetin solutions at concentrations 12.5 to 100 µg/mL in methanol.

The assay is based on the reduction of Mo (VI) to Mo (V) by the extract and subsequent formation of a green phosphate/Mo (V) complex at acid pH 9. The antioxidant capacity is expressed as ascorbic acid equivalent (AAE). The plant extract (0.3 mL) was combined with 3 mL of reagent solution (0.6 M sulfuric acid, 28mM sodium phosphate and 4 mM ammonium molybdate). The tubes were incubated at 95 0C for 90 min. After the mixture had cooled to room temperature, the absorbance of the solution was measured at 695 nm against blank. Total antioxidant capacity of the extract was measured from the regression equation prepared from the concentration versus optical density of ascorbic acid.

DPPH scavenging activity of the Syzygium cymosum was measured by the method developed by Manzorro et al. 10. The sample extract (0.2 mL) was diluted with methanol and 2 mL of DPPH solution (0.5 mM) was added. After 30min, the absorbance was measured at 517 nm. The percentage of the DPPH radical scavenging was calculated.

Total Reducing Power Determination: The reducing power of the extract was determined according to the method of Oyaizu 11. 10mg of extract in 1mL of distilled water was mixed with phosphate buffer (2.5 mL, 0.2 M, pH 6.6) and potassium ferricyanide [K3Fe(CN)6] (2.5 mL, 1%). The mixture was incubated at 50 0C for 20 minutes. A portion (2.5 mL) of trichloroacetic acid (10%) was added to the mixture, which was then centrifuged at 3000 rpm for 10 minutes. The upper layer of the solution (2.5 mL) was mixed with distilled water (2.5 mL) and FeCl3 (0.5 mL, 0.1%) and the absorbance was measured at 700 nm. Gallic acid, Quercetin and Ascorbic acid were used as reference compounds. All the analyses were performed in triplicate and the results were averaged. Increased absorbance of the reaction mixture indicated increasing reducing power.

Brine shrimp lethality bioassay was carried out to investigate the cytotoxicity of plant extracts 12. It was carried out to investigate the cytotoxicity of the extract. Brine shrimps (Artemia salina) were hatched using brine shrimp eggs in a conical shaped vessel (1L), filled with sterile artificial seawater (prepared by using sea salt 38 g/L and adjusted pH 8.5) under constant aeration for 48h. After hatching, active nauplii free from egg shells were collected from brighter portion of the hatching chamber and used for the assay. Ten nauplii were drawn through a micropipette and placed in each test tube containing 4.5 mL of brine solution. In each experiment, 0.5 mL of the extract was added to 4.5 mL of brine solution and maintained at the ambient room temperature for 24 h and surviving nauplii were counted. For the investigations test solution o the extract was prepared by dissolving 20 mg of the extract in 1 mL of pure dimethyl sulfoxide (DMSO). 500μl of solution was taken in test tubes each containing 500 μl of simulated seawater.

Stock solution having the concentration 1mg/mL was obtained by adding 9mL of simulated sea water in the test tube. A series of solutions of varying concentrations were prepared from the stock solution by serial dilution method. Tests were conducted along with negative control (DMSO treated), and different concentrations (1 μg/mL, 5 μg/mL, 10 μg/mL, 20 μg/mL, 50 μg/mL, 100 μg/mL, 200 μg/mL and 500 μg/mL) of the leaves extract of Syzygium cymosum in a set of two tubes per dose.

The plant phenolics constitute one of the major groups of the compounds acting as primary antioxidants or free radical scavengers. The antioxidant activity of the phenolic compounds is mainly due to their redox properties, which can play an important role in absorbing and neutralizing free readicals, quenching singlet and triplet oxygen or decomposing peroxides 13. It is suggested that polyphenolic compounds have inhibitory effects on mutagenesis and carcinogenesis in humans, when ~1.0 g was daily ingested from a diet rich in vegetables and fruits 14. The content of total phenolics in the methanolic extracts was determined using the Folin-Ciocalteu assay. The content of phenolics in the extract of Syzygium cymosum was 477.00±46 mg/g GAE.

Flavonoids protect cells against the damaging effects of reactive oxygen species, such as singlet oxygen, superoxide, peroxyl radicals, hydroxyl radicals and peroxynitrite. Epidemiological studies have shown that flavonoid intake is inversely related to mortality from coronary heart disease and the incidence of heart attacks. Flavonoid content was calculated from the regression equation of the calibration curve (y = 0.009 - 0.036) and is expressed as Quercetin equivalents (QE). The flavonoid content was 17.00±9.9 mg/g quercetin equivalent in Syzygium cymosum.

The total antioxidant capacities of the methanolic extracts of S.Cymosum were determined from the calibration curve (y=.005x-0.028) established by ascorbic acid at 695 nm. Ascorbic acid equivalent of S.Cymosum was 505.5±3.535.

DPPH easily accepts an electron or hydride radical to become a stable diamagnetic molecule. DPPH radicals react with suitable reducing agents as a result of which the electrons become paired off forming the corresponding hydrazine. The solution therefore loses colour stoichometrically depending on the number of electrons taken up. Fig. 1 shows the amount of each extract needed for 50% inhibition (IC50). IC50 value of S.Cymosum was found to be 64.99079µg/ml whereas Ascorbic acid showed the value of 1.16 µg/ml. 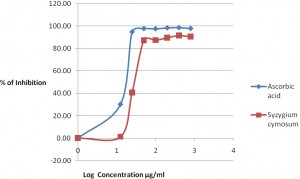 The antioxidant activity has been reported to be concomitant with the development of reducing power 14. The reducing properties are generally associated with the presence of reductones 15, which have been shown to exert antioxidant action by breaking the free radical chain by donating a hydrogen atom 16. Reductones are also reported to react with certain precursors of peroxide, thus preventing peroxide formation. Fig. 2 shows the reductive capabilities of the plant extract compared to ascorbic acid. The extracts were found to display moderate reducing power and the reducing power of the extract was observed to rise as the concentration of the extract gradually increased. 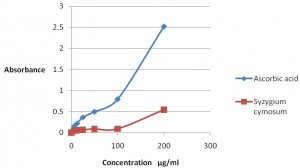 The methanolic extract of S.Cymosum was tested for Brine shrimp lethality bioassay using brine shrimp nauplii and DMSO as a solvent. Control was used to see whether DMSO had any effect on brine shrimp lethality. The control group of brine shrimp nauplii with and without DMSO exhibited no mortality. For the extract, the number of nauplii died and percent mortality was counted. The result is shown in the following table The LC50 value of methanolic extract of S.Cymosum bark was 307μg/ml. As apparent from our results it can be revealed that the plant extract exhibited mild cytotoxic effect.

CONCLUSION: The methanolic extracts of Syzygium cymosum bark exhibited significant antioxidant activity. In the present study, the observed DPPH scavenging activity of the methanolic extracts of bark might be useful for the development of newer and more potent natural antioxidants. The plant extract exhibited mild cytotoxic effect. Further phytochemical and pharmacological studies are also required to use their medicinal and pharmaceutical potentialities.

ACKNOWLEDGEMENTS: Tania Binte Wahed, assistant professor is thankful to Prof. Dr. Md. Rafiquzzaman, Chairman, Department of Pharmacy, Jahangirnagar University for the facilities kindly he provided to execute the research work presented in the article. The author is also thankful to Kakan SutraDhar, A. H. M. Nazmul Hasan, Sonia Binte Wahed for their knowledge and assistantship during research work.