ABSTRACT: This research aims to detect the in-vitro antioxidant activity of the methanolic and aqueous stem extract of Rotula aquatica lour and to estimate its phenolic and flavonoid content. DPPH (2, 2-diphenyl-1-picryl hydrazyl), superoxide radical scavenging capacity and reducing power assay (RPA) were carried out to evaluate in vitro antioxidant activity. Phytochemical screening was carried out according to standard procedures followed by their TLC profiling was carried out. Total phenolic content was estimated by using Folin-Ciocalteu’s reagent and total flavonoid content by Aluminium chloride colorimetric method. It was observed that DPPH and superoxide IC50 value of methanolic and aqueous stem extracts of Rotula aquatica lour were found to be (50.98±0.19)µg/ml, (73.67±0.12)µg/ml and (65.41±0.42)µg/ml, (71.97±0.31)µg/ml respectively and reducing power of the extract was increased with the increasing concentration. Total phenolic and flavonoid contents were found to be 6.80 g and 5.90 g gallic acid equivalent per 100 g and 2.60 g and 1.79 g quercetin equivalent per 100 g of methanolic & aqueous extract respectively by spectrophotometric method. These primary findings suggest that stem extract possess phenolic and flavonoid constituents that are responsible for antioxidant activity.

INTRODUCTION:  In recent years, consumers desire to manage a festering health condition through improved diet. Plants have evolved different phytochemicals and enzymes as a reservoir of antioxidant defence to maintain recovery and metabolism. Anxiety about improving health, involving natural products with high potential, has potentiated advance research on antioxidants.

Plant extract or plant derived antioxidant compounds improve human body’s antioxidant defence and are preferable because of their safety over synthetic. Therefore, a large scale of research is based on discovering plants that protect against various kinds of ailments with antioxidant potential that may be used for human consumption 1.

Rotula aquatica lour is species of aromatic flowering shrub belonging to family Boraginaceae. It is mostly present in aquatic region. It is a rare rheophyte native to India, where it is a member of the lotic ecosystem of streams 2. Rotula aquatic lour is also called as pashanbed; it is widely distributed in India, Sri Lanka, tropical south-eastern Asia and Latin America.

In India, it is distributed from Kumaun to Assam and from Western to Southern India.The plant contain Baunerol, steroid, alkaloid, and rhabdiol and allantoin. The medicinal values of plant lie in their component phytochemicals such as alkaloids, flavonoid, phenolic compounds and other nutrients like as amino acid, proteins, which produce a definite physiological action on the human body. A systematic search for useful bioactivities from medicinal plants is now considered to be a rational approach in nutraceutical and drug research. It is an Ayurvedic plant which is an important traditional medicine for kidney and bladder stones.

In Ayurveda, plant used for cancer, piles, diabetes, venereal diseases, kidney and bladder stones, cough, heart problems, blood disorders, fever, poisonings, ulcers and uterine diseases.It is used as laxative, diuretic, antioxidant, antihelmentic, astringent, bitter etc. The different parts of plant extract have been reported to acquire above activities. But so far, there are no reports made on the comparison of antioxidant activity and phytochemical properties of stems of Rotula acquatica lour in various organic and aqueous extracts 3.

Plant material: The stems of Rotula aquatica lour were collected from Sawantwadi and authenticated from Botanical Survey of India, Pune, Maharashtra. The stems were cleaned and dried at room temperature in shade, away from direct sunlight and coarsely powdered in grinder.

Preparation of extract: The powdered material was subjected to soxhlet extraction with various solvents ranging from non-polar to polar. The solvents used were petroleum ether, chloroform, methanol and water. Each time before extraction with next solvents the marc was air-dried. All the extracts were concentrated by distilling the solvent at low temperature. They were then weighed and percentages of different extractive values were calculated with respect to air-dried substance.  The extracts were selected for phenolic, flavonoid content and antioxidant activity on the basis of phytochemical screening and literature survey.

Preliminary Phytochemical Screening: The preliminary phytochemical screening of the different extracts of Rotula aquatica lourwere carried out in order to ascertain the presence of its constituents by utilizing standard conventional protocols 4, 5.

Determination of Total Phenolic Content: The concentration of phenolic in plant extracts was determined using spectrophotometric method. Methanolic solution of the extract in the concentration of 1 mg/ml was used in the analysis. The reaction mixture was prepared by mixing 0.5 ml of methanolic solution of extract, 2.5 ml of 10% Folin-Ciocalteau’s reagent dissolved in water and 2.5 ml 7.5% NaHCO3. Blank was concomitantly prepared, containing 0.5 ml methanol, 2.5 ml 10% Folin-Ciocalteu’s reagent dissolved in water and 2.5 ml of 7.5% of NaHCO3.

The samples were thereafter incubated in a thermostat at 45 oC for 45 min. The absorbance was determined using spectrophotometer at λmax = 765 nm. The samples were prepared in triplicate for each analysis and the mean value of absorbance was obtained. The same procedure was repeated for the standard solution of gallic acid and the calibration line was constructed. Based on the measured absorbance, the concentration of phenolic was read (mg/ml) from the calibration line; then the content of phenolic in extracts was expressed in terms of gallic acid equivalent (mg/g of GA/g of extract). All the tests were performed in triplicate.

Determination of Total Flavonoid Content: Total flavonoid content was determined according to the procedure by Aluminium chloride colorimetric method. Extract solution (1 ml, 0.1 mg/ml) was placed in a 10-ml volumetric flask, and then 5 ml of distilled water was added followed by NaNO2 solution (0.3 ml, 5%). After 5 min, AlCl3 solution (0.6 ml, 10%) was added. After another 5 min, NaOH solution (2 ml, 1 M) was added and volume was made up with distilled water. The solution was mixed thoroughly and absorbance was measured at 510 nm. Total flavonoid contents were expressed as milligrams of quercetin equivalent per milligram of dry weight. All the tests were performed in triplicate 7, 8.

DPPH Radical Scavenging Activity Assay: The free radical scavenging activity of the fractions was measured in vitro by 2, 2′- diphenyl-1-picryl hydrazyl (DPPH) assay according to the method described earlier. The stock solution was prepared by dissolving 24 mg DPPH with 100 ml methanol and stored at 20°C until required. The working solution was obtained by diluting DPPH solution with methanol to attain an absorbance of about 0.98±0.02 at 517 nm using the spectrophotometer. A 3 ml aliquot of this solution was mixed with 100 μl of the sample at various concentrations (10 - 500 μg/ml). The reaction mixture was shaken well and incubated in the dark for 15 min at room temperature. Then the absorbance was taken at 517 nm. The control was prepared as above without any sample. The scavenging activity was estimated based on the percentage of DPPH radical scavenged as the following equation:

Where,A cont is the absorbance of control reaction and A test is the absorbance in the presence of extract.The antioxidant activity of the extract was expressed as IC50. The IC50 value was defined as the concentration (in μg/ml) of extract that inhibits the formation of DPPH radical by 50% 9.

Superoxide Anion Scavenging Assay: The assay for superoxide anion radical scavenging activity was supported by riboflavin-light-NBT system. Briefly, 1 ml of sample was taken at different concentrations (20 to 100 μg/ml) and mixed with 0.5 ml of phosphate buffer (50 mM, pH 7.6), 0.3 ml riboflavin (50 mM), 0.25 ml PMS (20 mM), and 0.1 ml NBT (0.5 mM). Reaction was started by illuminating the reaction mixture using a fluorescent lamp. After 20 min of incubation, the absorbance was measured at 560 nm. Curcumin was used as standard. The scavenging ability of the plant extracts were determined by the following equation10.

Assay of Reducing Power: 1 ml of plant extract solution (final concentration 100-500 mg/l) was mixed with 2.5 ml phosphate buffer (0.2M, pH 6.6) and 2.5 ml potassium ferricyanide [K3Fe(CN)6] (10g/l), then mixture was incubated at 50oC for 20 minutes. Two and one-half, 2.5 ml of tri-chloroacetic acid (100g/l) was added to the mixture, which was then centrifuged at 3000 rpm for 10 min. Finally, 2.5 ml of the supernatant solution was mixed with 2.5 ml of distilled water and 0.5 ml Fecl3 (1g/l) and absorbance measured at 700nm in UV-Visible Spectrophotometer (Jasco V-530 UV-Visible Spectrophotometer). Ascorbic acid was used as standard and phosphate buffer used as blank solution. The absorbance of the final reaction mixture of two parallel experiments was expressed as mean. Increased absorbance of the reaction mixture indicates stronger reducing power 11, 12.

TLC Profile: TLC of the methanolic extract was developed in the following mobile phases for phenolic and flavonoid compounds. 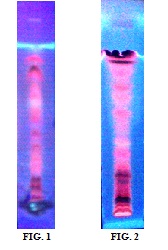 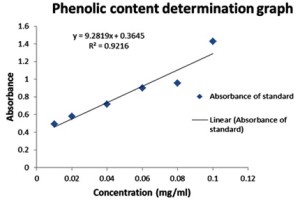 FIG. 3: GRAPH OF ABSORBANCE AGAINST CONCENTRATION FOR TOTAL PHENOLIC CONTENT 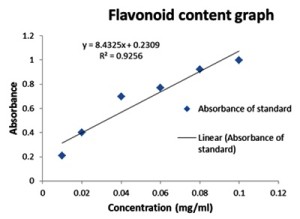 FIG. 4: GRAPH OF ABSORBANCE AGAINST CONCENTRATION FOR TOTAL FLAVONOID CONTENT 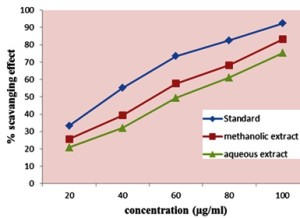 Assay of Reducing Power: The reductive capabilities of methanolic and aqueous extract of the stems of Rotula aquatica lour were compared to ascorbic acid. 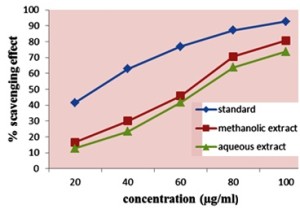 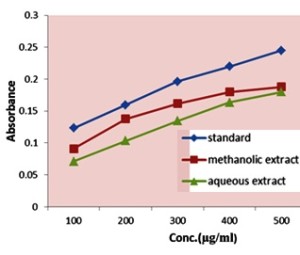 CONCLUSION: The methanolic extract of stems of Rotula aquatica lour have indicated strong antioxidant activity which might be helpful in preventing or slowing the progress of various oxidative stress induce diseases such as diabetes, liver diseases, cancer, ageing etc. which would be beneficial to the human health. This may be related to the high amount of phenolic and flavonoid compounds present in this plant methanolic extract.

We have also established the relationship of total phenolic, flavonoid contents and the free radical scavenging activity. Further studies are needed to clarify the in vivo potential of this plant in the management of human diseases resulting from oxidative stress and suggested that this plant could be used as an additive in the food industry to provide good protection against oxidative damage.